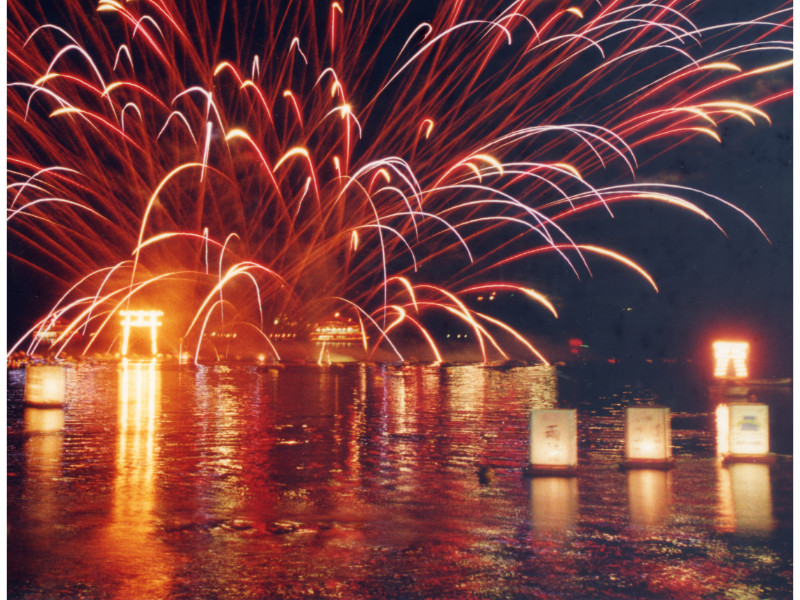 The August 1st Lake Festival is held as a festival-eve vigil that is part of the festival put on by Hakone Shrine. This vigil is dedicated to the Kuzuryu deity, the patron deity of Lake Ashi. Following a ceremony at the new Kuzuryu Shrine, the chief priest of Hakone Shrine boards a special boat alone and embarks for the center of the lake to present a commemorative offering of red rice to the deity. Three traditional Japanese boats ply their way through the bay in an impressive display. This fireworks display is held over the water and involves a launch of 4,000 fireworks, the largest event of its kind during the festival dates. Several hundred lanterns are placed on the water to illuminate the summer sky. On the lakeshore, local Kuzuryu and Hakone style drumming are performed, with Japanese drum troupes of different styles from around Japan coming together in this festival of drumming. Several stalls serving food also line the area to give it a festive mood. This is the most important event of the year for Hakone Shrine.
Hakone Shrine was founded in 757 by the priest Mangan, who acted as an oracle for the shrine deity and build the edifice here by imperial decree.

On the night prior to the festival, Motohakone Port plays host to a consecratory fireworks festival, with 2,500 fireworks going up. In this festival, an imperial carriage makes the rounds in a prayer for the wellbeing and safety of local residents. It proceeds from Hakone Shrine to Motohakone no Sato, then past the lake to the Hakone Sekisho, then within Hakone no Sato before arriving at Komagata Shrine in a traditional procession.

At night, Hakone-en Port plays host to the Hakone-en Summer Night Festa. Fireworks are launched with special messages read aloud over the PA system, and unique “digital” fireworks explode to the tune of music. There are also the “Niagara” fireworks, which give off a flowing effect. In total, 3,500 fireworks go off at this event. *Applications for messages to include in fireworks are open to the general public. This festival is a way of giving thanks to the Kuzuryu deity and asking for its continued blessings. The main building of Kuzuryu Shrine is where a sacred Shinto rite is held. This is followed by a sacred flame being carried to Kojiri Port and installed in a fire basket to launch the start of the Kuzuryu Fireworks Festival. As the mountains are bathed in twilight, the flame-carrying ship plies its way solemnly towards the bank. After the Shinto rites, a fireworks display is put on, with approximately 2,500 fireworks launched. The small bay and looming mountains are bathed in the sound and light of fireworks blasting off for your amazement. After the show, a nationwide top high school marching band performs for the crowd. At this event, you can see karate demonstrations by young boys and girls, Hakone and Kuzuryu-style drumming, followed by several hundred lanterns and an illuminated torii gate formation with 3,500 fireworks in the background.