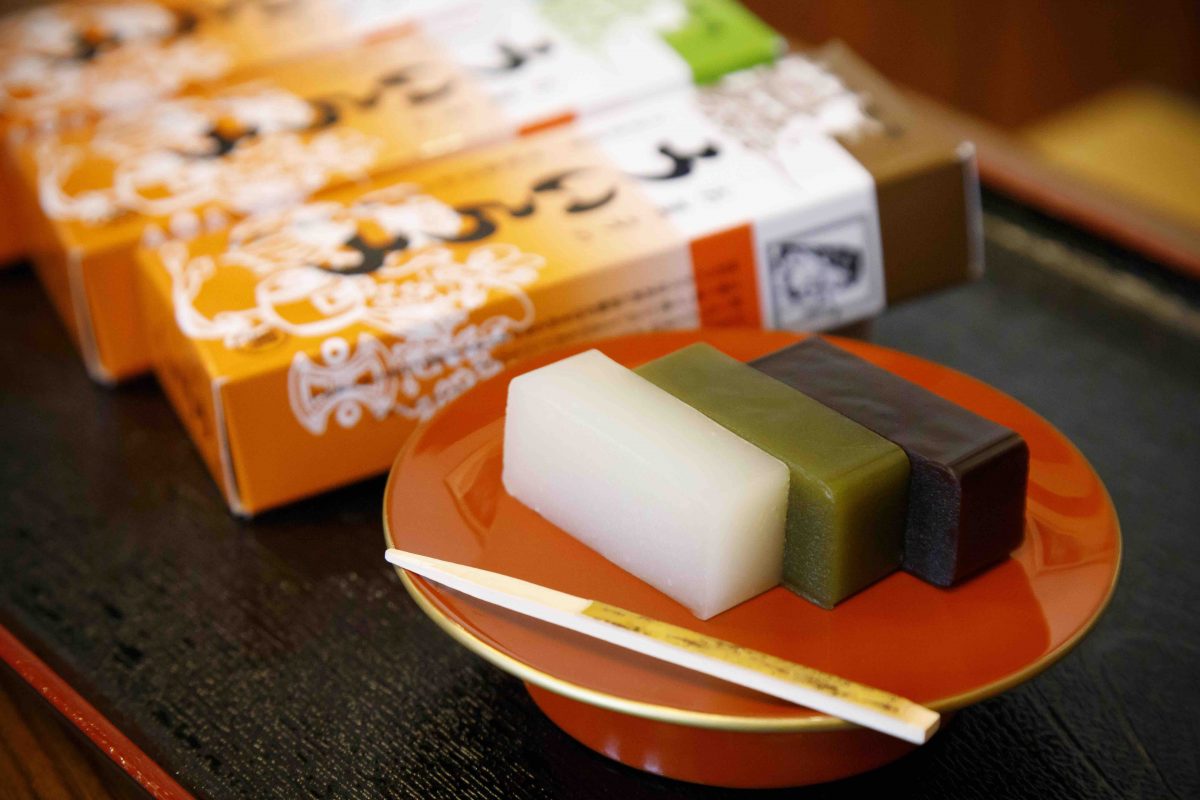 Uiro: A Time-Honored Dessert Conceived as a Gift for State Guests

Uiro is a confection believed to have first appeared in the Muromachi period (1336–1573), which would make it one of the oldest of Japan's traditional sweets. A steamed dessert made primarily from rice flour and brown sugar, uiro's simple sweetness and glutinous texture have won countless devotees over the course of several centuries.
The birthplace of uiro is a shop called Uiro in Odawara. This shop has been run for 650 years by 25 generations of the Uiro family. There was also a medicine called "uiro," which was famously the subject of Uiro Uri, a kabuki play that originally starred Ichikawa Danjuro II and is featured in the collection Kabuki Juhachiban (18 Best Kabuki Plays). The play's prologue gives a description of the store's exterior, which remains accurate to this day: "Eight ridges in eight directions and three beautiful ridges at the front; for the gables, the crest of chrysanthemum and paulownia with Imperial warrant..." The store also has a tea room. This is a must-visit spot for sightseers in Odawara.
Behind the store is the Uiro Museum, which is housed in a building that was once a warehouse, built in 1885. The museum is part of the store. For assistance, please ask an attendant at the store. Five centuries have passed since Toemon, the fifth head of the Uiro family, moved to Odawara at the invitation of the feudal lord Hojo Soun. The Uiro Museum hosts a display of items such as tools that were used in the production of medicine. Visitors will also learn about the story behind the store's appearance, the origins of the Uiro name, and more. The Uiro family excelled in the making of medicine, and the uiro medicine is a pill made of brown sugar with a formula that was passed down in the family.
In the Muromachi period, brown sugar was expensive. It was imported, along with other medicine-making ingredients, from the south. The Uiro family's status as medicine-makers gave them access to brown sugar, and this led to the creation of the uiro confection.
To this day, the secret of uiro is still being passed down from father to only son, generation to generation within the Uiro family. The scent of wood fills the museum, taking visitors on a sensory trip back to the Meiji period (1868–1912), when the building was used as a warehouse.
"Please come and experience the cultural inheritance of the Japanese people, for whom instruments have been important partners in the work of creating new things," says Toemon Uiro, 25th-generation proprietor. The confection uiro calls out with its fluffy texture and subtle sweetness. When the season and weather permit, uiro cakes are made daily by artisans using a closely-guarded recipe. Uiro can be found all over Japan, but the ingredients and methods vary from place to place. For the ultimate experience, we hope you have the chance to try uiro here in its birthplace.

This shop produces and sells a popular sweet and Odawara souvenir called "uiro," as well as an herbal medicine of the same name it's been making for over 600 years. They also have a museum in a renovated storehouse built in 1885.