Nihon Minka-en is a "Japan Open-Air Folk House Museum" with 25 historic Japanese-style houses spread out over approximately 30,000 square meters. Of those houses, seven are designated Important Cultural Properties of Japan. Located in the city of Kawasaki, Nihon Minka-en occupies a section of the verdant Ikuta Ryokuchi Park. Displayed here are private houses, water mills, boatmen's cabins, storehouses, and rural kabuki stages, among other structures from within Kawasaki Prefecture and around Japan.
Here, we would like to share some information on just some of what visitors can discover here. 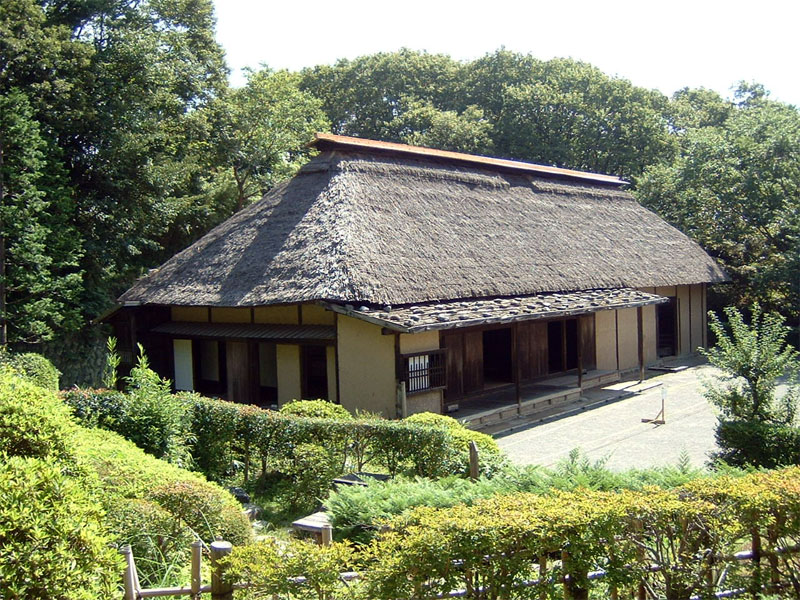 We begin with the residence of the Sasaki family, which was disassembled and transported from the town of Sakuho, Nagano Prefecture to be rebuilt here. According to building registers and records, the home was built in 1731, and later relocated and rebuilt due to flooding of the Chikuma River. These and other stories tell of an important house that is itself the living history of a family. The house is also furnished with a guest washroom and bath, indicating that the Sasaki family was one of considerable status within their village. 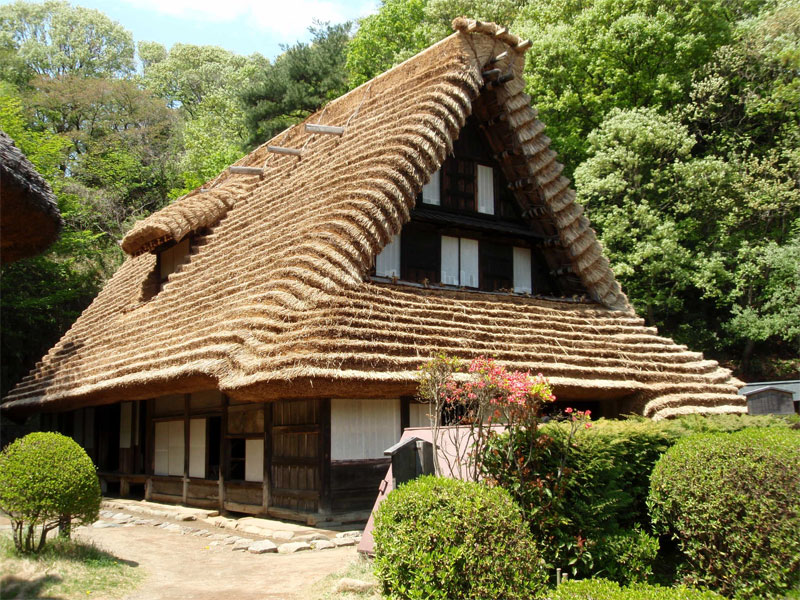 The Emukai family house was rebuilt here after being moved from Gokayama, Toyama Prefecture, which, along with the neighboring village of Shirakawa-go, Gifu Prefecture, is known for its gassho-zukuri architecture. The gassho in gassho-zukuri means "hands joined in prayer," in reference to the shape of the steep-sloped roofs used in this architectural style. The second and third floors were used for purposes such as raising silkworms. 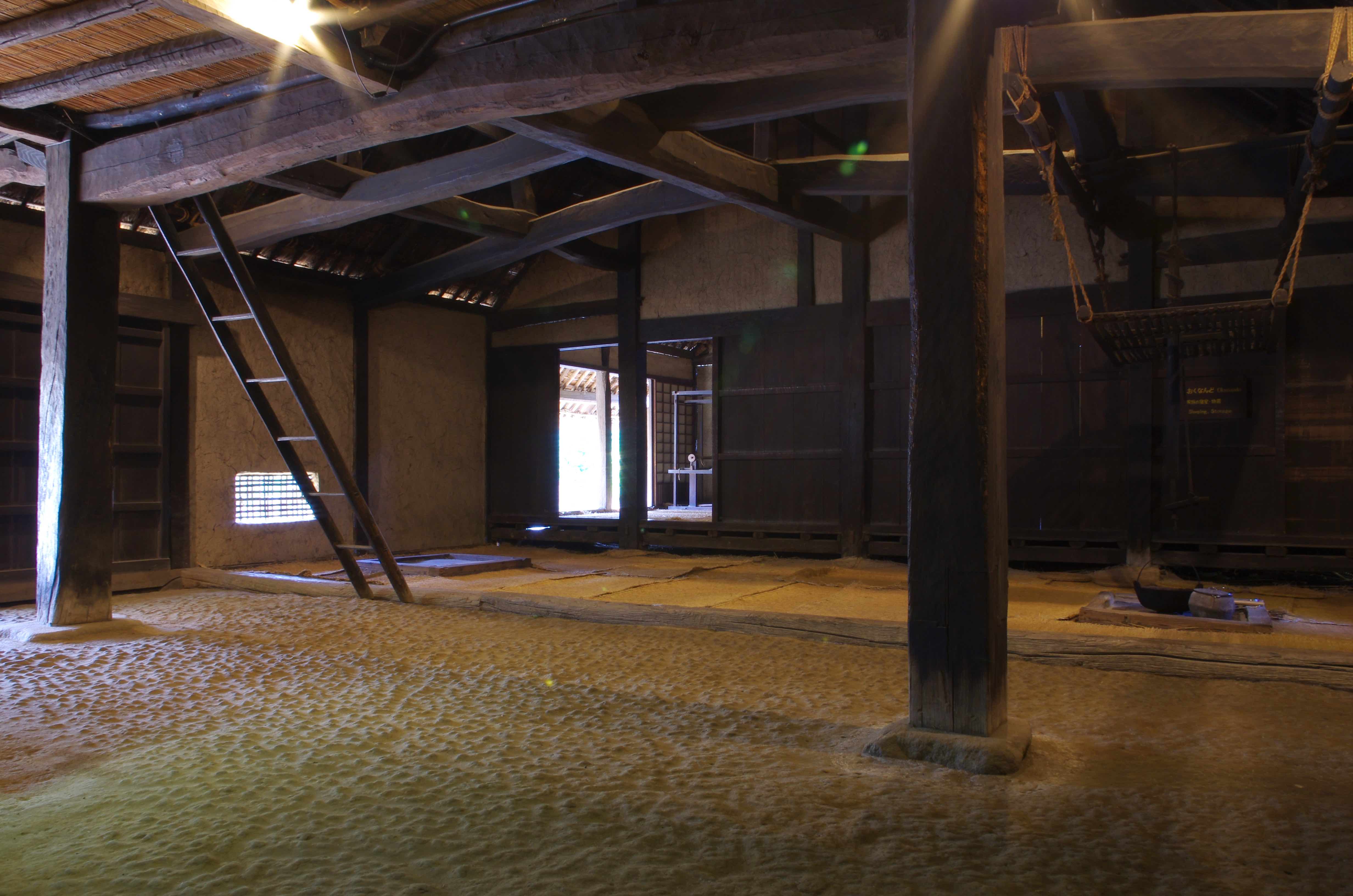 This is the interior of the Hirose family house, which was moved here from Koshu City, Yamanashi Prefecture. Its distinguishing feature is its use of "doza," a kind of parquet of straw mats and thatching grass laid out over the ground, in place of floorboards in the living room. 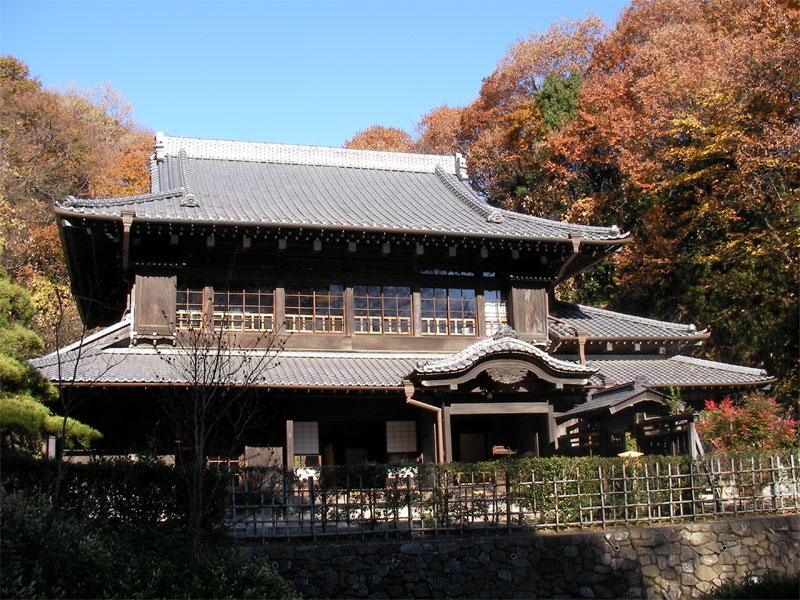 The primary residence of the Hara family of big landowners, once located in in the Kosugijinya-Cho neighborhood of Nakahara-Ward, Kawasaki City, Kanagawa Prefecture. The color of the wall plaster and height of the ceiling differ from room to room. The more formal the room, the higher the ceiling. 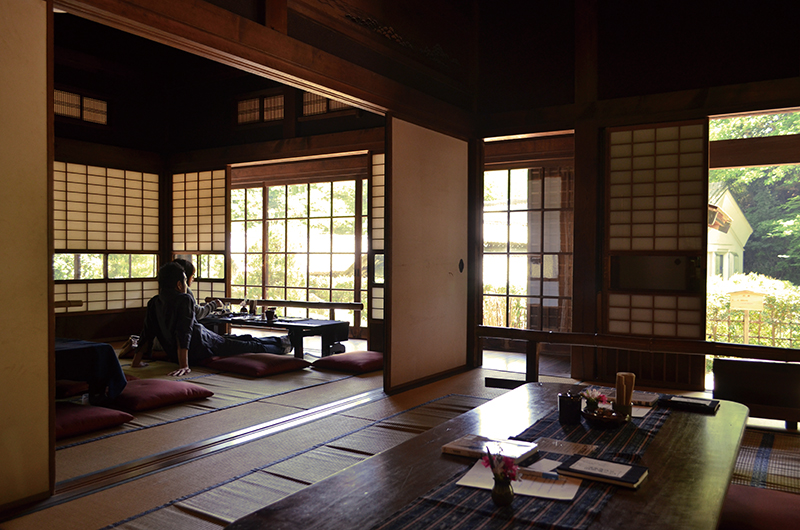 The tatami mat room of the Hara family residence now plays host to a limited-time "old house cafe" in the spring and fall. During those times, visitors can enjoy coffee noted for its great aroma, as well as desserts and more, in the tatami mat room of a century-old home of distinction.
*For dates of availability, please refer to the official homepage. 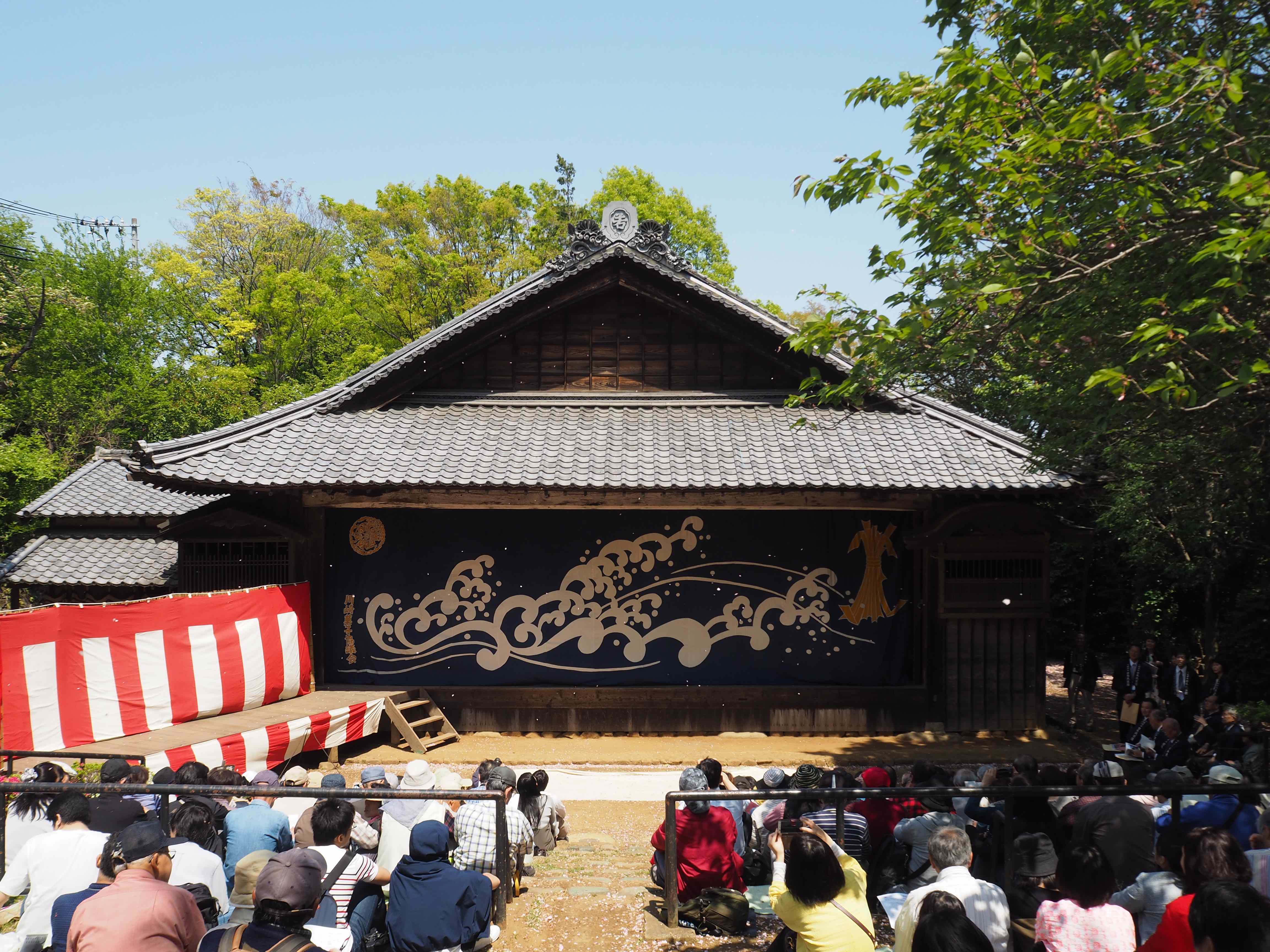 This is the Old Funakoshi Stage, which was built in 1857, shortly before the end of the Edo period. A revolving stage 3 ken (5.4 meters) in diameter, it is equipped with features required for traditional kabuki theater, including an elevated walkway through the audience with a trap door.
The stage continues to be used for folk art performances. This is a precious structure that allows present-day audiences to experience the pulsating energy of an Edo period playhouse. 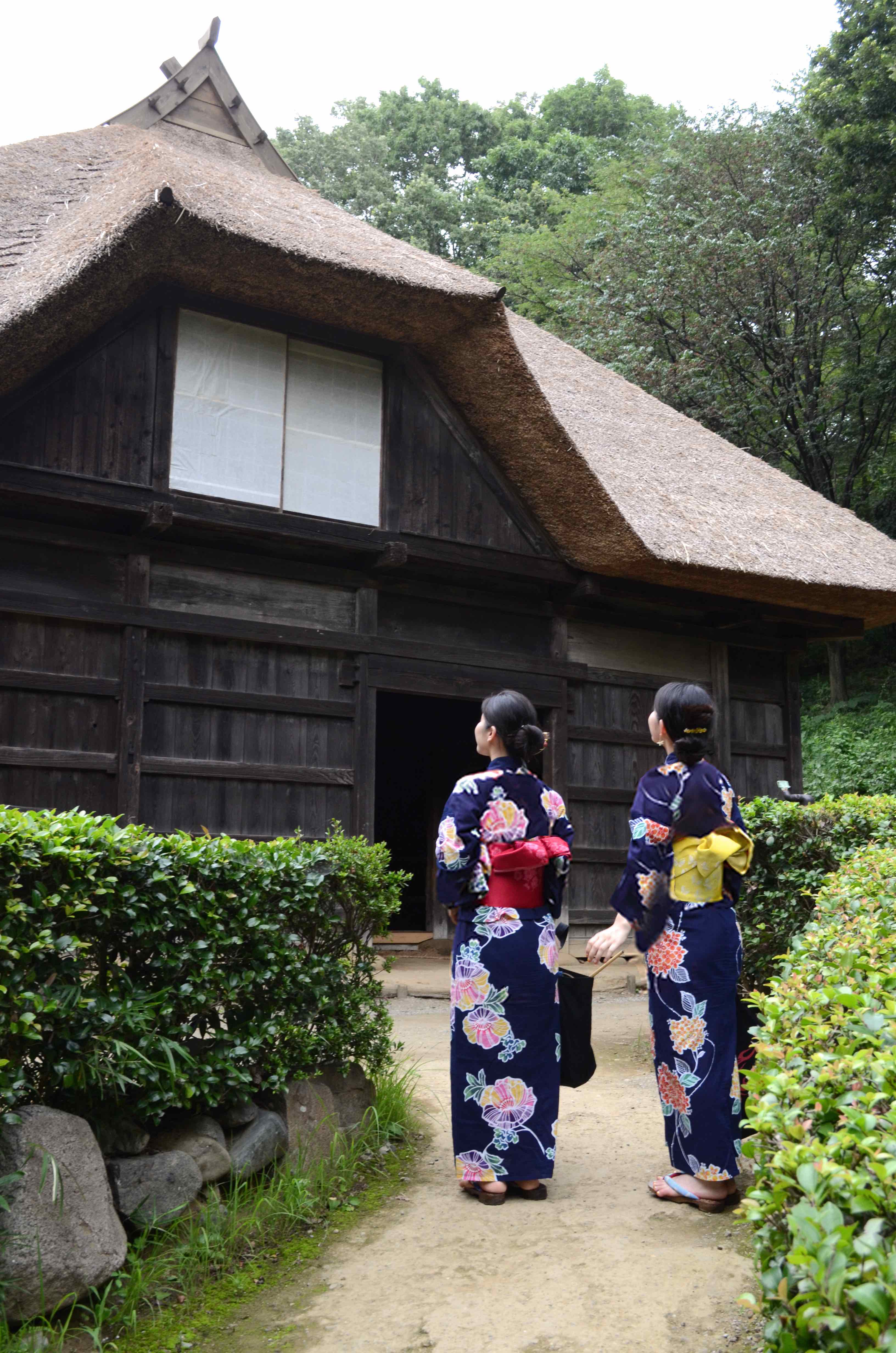 Events like "Enjoying the Evening Cool Breeze in Minkaen" in the summer and "New Year Celebration" on January 4th come with great bonuses, such as free admission for people who arrive wearing a yukata, kimono, or jinbei (a type of traditional summer clothing consisting of a top and matching shorts or pants). Exploring the open-air museum in traditional Japanese clothing makes a great experience that much more exciting. 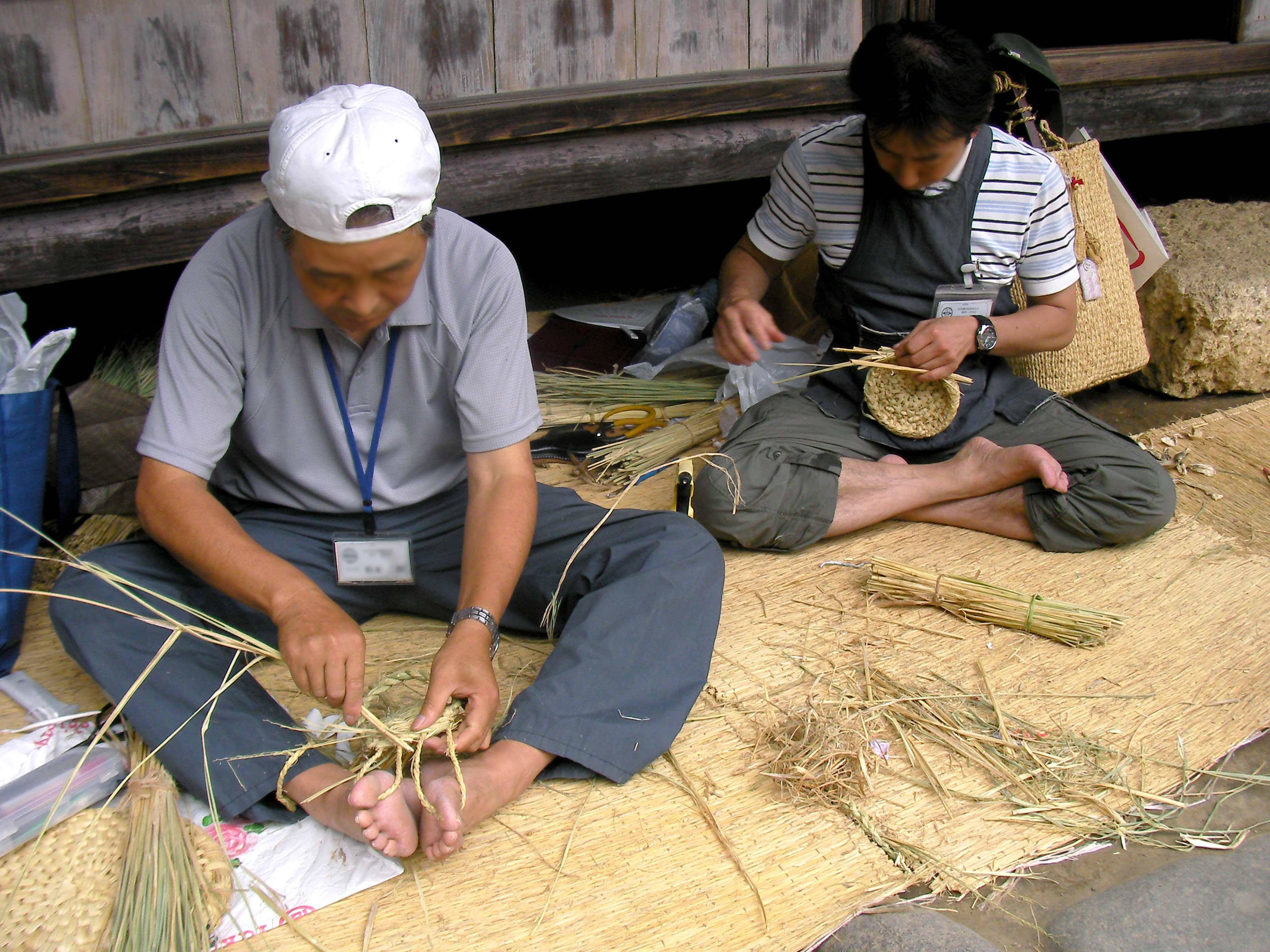 Folk craft production exhibitions are also held here. These events allow visitors to learn about weaving, straw craft, and bamboo craft. If this interests you, please take a look at the Minkaen website!

This open-air museum hosts a collection of 25 traditional buildings, mostly from the Edo period (1603 - 1868). They were relocated to the museum from around the country. Every building has been designated a Cultural Property, and they house displays of agricultural equipment and folk tools used in the home. You'll feel you've slipped back in time while enjoying the seasons, including springtime cheery blossoms and autumn leaves. The folk houses host storytelling, performing arts, and lots of other events, as well as a variety of hands-on programs. You can learn about the buildings at an exhibition in the main hall, where they hold planned exhibits too. Their Traditional Craft Hall is open for everyone to experience old-fashioned indigo dyeing.