*To prevent the spread of the new coronavirus infection, please make an advance reservation online (specify the date and time) before entering. Click here for the official website of the Yokohama Port History Museum.

With the advancement of information technology today, information about disasters spreads around the world in an instant through SNS and other means. Even after the Great East Japan Earthquake 10 years ago, the devastation after the disaster was recorded not only by television cameras but also by various media, and spread to the world through the Internet. However, at the time of the Great Kanto Earthquake on September 1, 1923 (Taisho 12), when there were no televisions or radios, the people who recorded disaster information were newspaper and news agency employees, government engineers, and photo studios in town. It was the photographers who run. They took pictures of Yokohama, which had become a burnt field, and sent it to various quarters.

This exhibition focuses on photo originals (glass dry plates) from the collection of the Nishino Photo Studio, which were discovered in the autumn of 2018 in Kamakura City. At the milestone of the 10th anniversary, we will reconsider the significance of conveying the records of disasters.

《This is the highlight! 》
1. The damage in Yokohama City caused by the Great Kanto Earthquake, which was clearly recorded on the photographic original plate
The 28 photographic originals were found in good preservation condition with few major damages. Therefore, from this original plate, you can see the details of the situation at that time, such as the state of the collapsed building and the people passing by.

2. Photographer Yoshinosuke Nishino
Among the photographers who photographed the damage after the Great Kanto Earthquake, the owner of the Nishino Photo Studio (located in Yukinoshita, in front of Tsurugaoka Hachimangu Shrine in Kamakura), which had 28 photographic originals.
I would like to introduce Yoshinosuke Nishino. Yoshinosuke Nishino, who was born in October 1881 (Meiji 14) in what is now Hinode-cho, Naka-ku, Yokohama, aspired to become a photographer, and in the first year of the Taisho era, he ran a photography business there. After that, he opened a photo studio in Kamakura, changed his name to "Kaichi" in the first year of the Showa era, and died in October 1952 (Showa 27).

3. Sale of the exhibition catalog "Disaster area through the lens, Yokohama - glass plate photographs of the Great Kanto Earthquake, formerly owned by Nishino Photo Studio"
A total of 28 glass dry plate photographs of the Great Kanto Earthquake, previously owned by the Nishino Photo Studio, were released for the first time this time. The devastation of the earthquake about 100 years ago, such as the state of the river flowing through the city of Yokohama, the rubble of Yamashita Town, the buildings that were burned down leaving the outer walls, and the collapsed port facilities, comes to the fore. 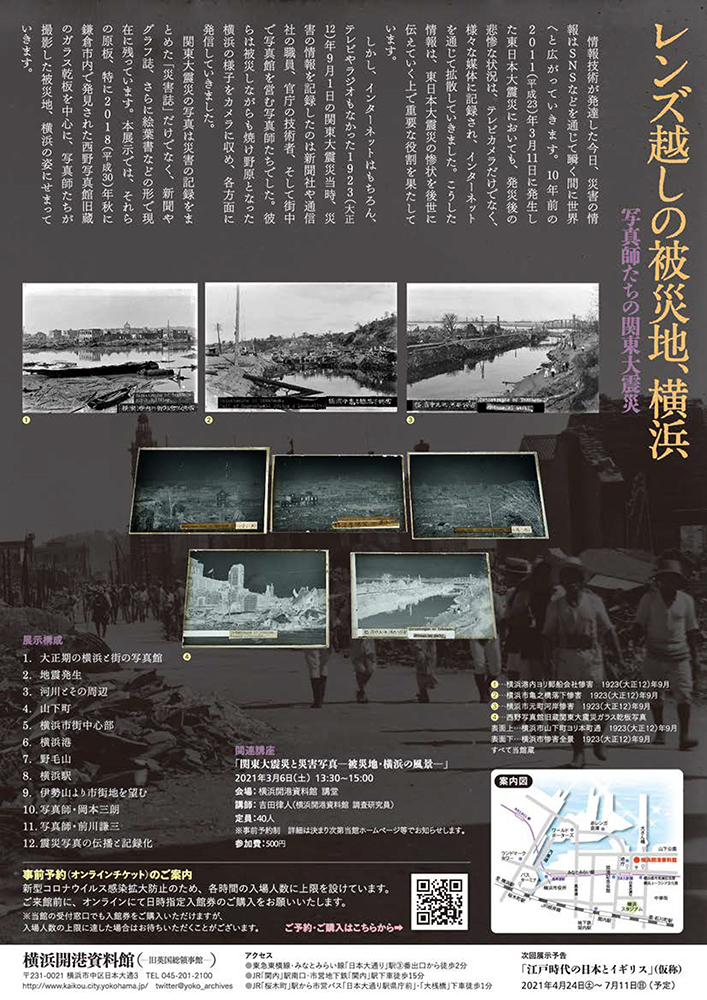