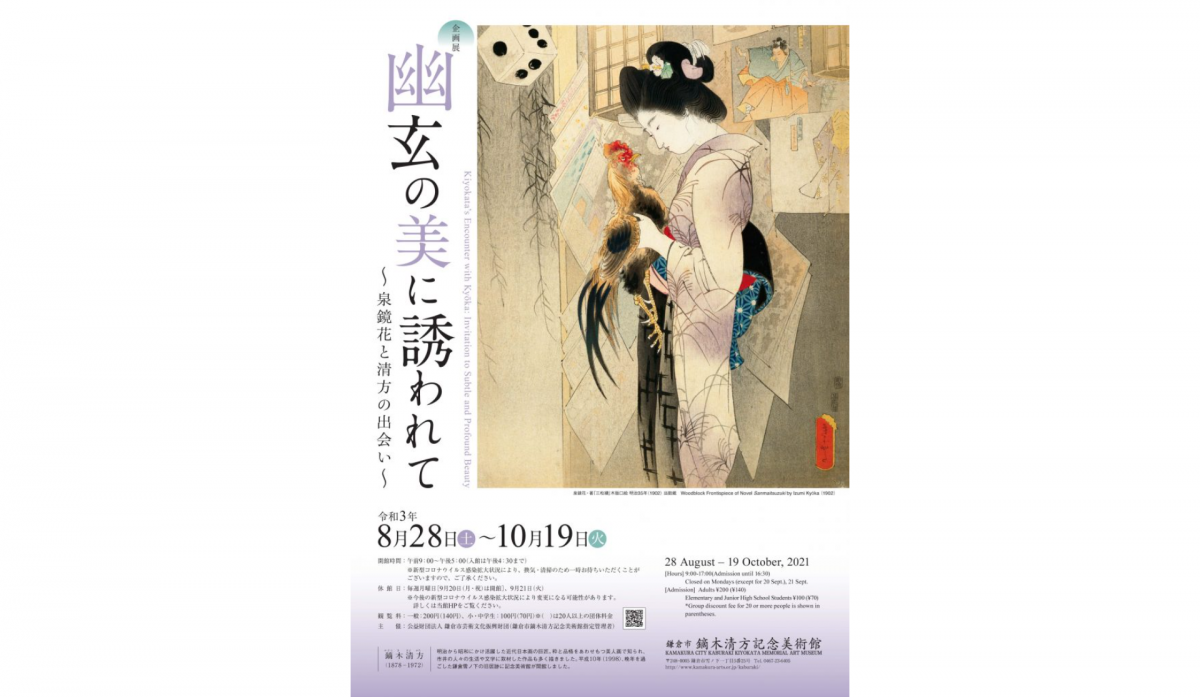 Introducing the interaction between Kiyokata and Kaburagi and the expanse of art, focusing on the illustrations drawn for Kaburagi's novels and related Japanese paintings.

One of the characteristics of Kiyokata art is the influence of Kyoka Izumi, who has been deeply intimate with him for over 40 years.
Kiyokata, a young man, was an avid reader of Kaburagi's literary works, and was studying with the goal of drawing illustrations for Kaburagi's novels. Kiyokata, who eventually became an up-and-coming illustrator, was asked by Kaburagi, who heard his reputation, to cover the new book "Sanpaku" in the spring of 1901. In August of the same year, when I was working on drawing, I finally met Kyoka, who I admired, through Matsuya Yasuda. From the first meeting, the two of them hit it off like an old friend, and since then, Kiyokata has been working on illustrations and bindings for numerous Kyoka literary works. Even after moving to the Japanese art world, he liked to cover the literary world of Kyoka, and produced "Notebook", which is said to be a masterpiece of tabletop art.
In commemoration of the 120th anniversary of the encounter between the two, this exhibition will focus on the illustrations drawn for Kaburagi's novels and related Japanese paintings, as well as the interaction between Kiyokata and Kaburagi and the spread of art. I will introduce it.

The museum was built on the site of the former residence of Yukinoshita Kamakura, the final land of the painter Kiyokata Kaburagi, a master of modern Japanese painting. A Japanese-style building has a neat appearance in a quiet residential area of the ancient city of Kamakura.

Kiyokata Kaburagi was born in Kanda, Tokyo in the 11th year of the Meiji era. I grew up familiar with literary arts from an early age, and the beginning of my painting business was from an illustrator. Later, the works, which were suitable for hand-painted paintings and were drawn with the main subjects of literature such as the pure and graceful female figure, lively common life, portraits, and favorite readings such as Higuchi Ichiyo and Izumi Kyoka, are for the people of Ichii. You can feel the eyes of empathy and charity. I have been associated with Kamakura since I settled in Zaimokuza in 1946. In 1954, from the year of receiving the Order of Culture, he opened a painting room here in Yukinoshita and spent the time until his death in 1972 at the age of 93. In his later years, Kiyokata called himself "playing with the citizens' style" and worked on many works on the subject of common people's lives. He has left many essays in Japanese paintings full of emotion and elegant writing style.

In 1994, the bereaved family donated works of art, materials, and land and buildings to Kamakura City with the intention of passing on the place of their painting and creation to posterity. In response to this, it opened as a memorial museum in April 1998. We hope that all visitors will have a relaxing time while remembering Kiyokata's art and life.