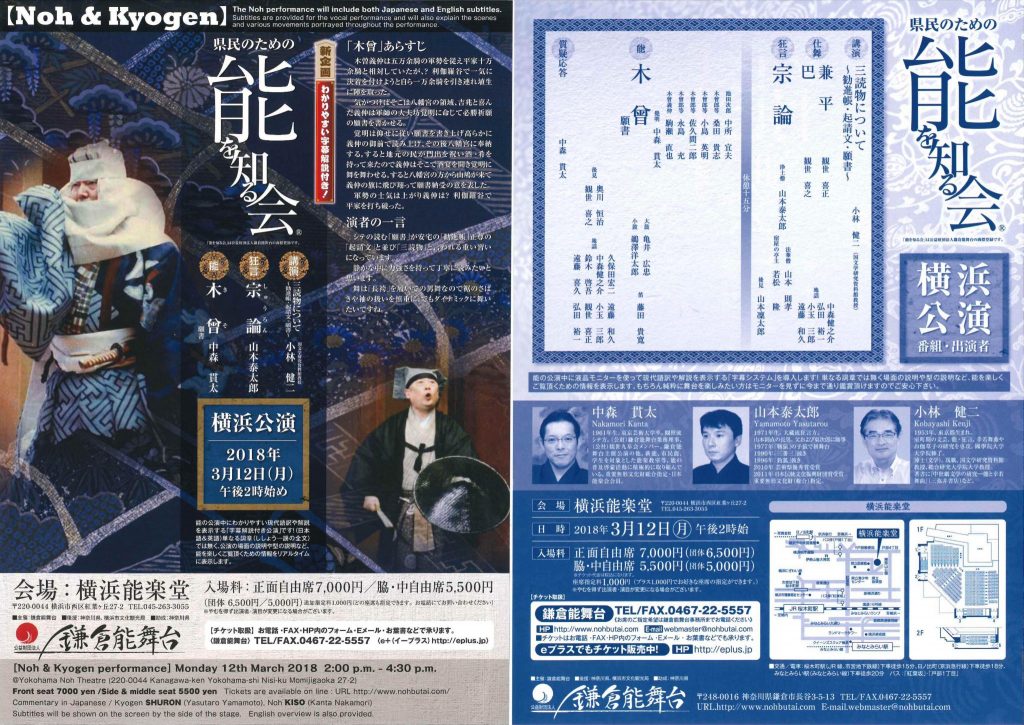 Yokohama Noh Theater
(Please note that this page was created using Google's automatic translation service and understand that because of this, its translation may not necessarily be accurate.)

* This time, Kanta Nakamori will challenge the application, which is the highest among the "Ataka / Kanjinchō", "Masataka / Kishōmon", and "Kiso / Application" called "Sanyomono".
It is a song set in the legend that Yoshinaka Kiso, who is aiming for the capital, devoted a prayer for victory to Hanyu Hachimangu, which was on the way to pursue the Heike clan, and drove the Heike clan for his benefit. It is a masterpiece with many characters and a rich story. During the performance of Noh with easy-to-understand explanations, modern translations and subtitles in English are projected, making it a performance that even those who are new to Noh can enjoy. Kyogen will be performed by Master Taitaro Yamamoto, who will perform "Shuron," which is a comical depiction of the conflict between the Lotus Sutra and the Pure Land monks. After the Noh performance, there will be a question and answer session by Kanta Nakamori, who will star in the Noh play.

Noh "Kiso" Synopsis
Yoshinaka Kiso (Tsure) was facing the Heike 100,000 horses with an army of 50,000 horses, but he himself took the 10,000 horses to Habu to settle at once in Rikaradani.
When I noticed, there was the shrine of Hachimangu, and Yoshinaka, who was pleased with Kitcho, ordered the warrior Daiobo Kakumyo (Shite) to write a prayer for victory. Kakumyo writes the application according to his request, reads it out in front of Yoshinaka, and then dedicates it to Hachimangu.
Soon after, the locals celebrated the start and brought sake and appetizers, so Yoshinaka held a banquet there and danced to Kakumyo.
Then, Yamabato came from Hachimangu and flew to the flag of Yoshinaka to express his intention to accept the application. The morale of the army rose, and Yoshinaka eventually defeated the Heike in Rikaradani.

-Highlight-
The "application" read by Shite is a heavy lesson called "three readings" along with Ataka's "Kanjinchō" and Masataka's "Kishōmon".
I want to read it carefully with strength in a quiet environment.
Since Mai is a male dance wearing a "long skirt", I would like to dance carefully, but not in small pieces, by handling the hem and sleeves.