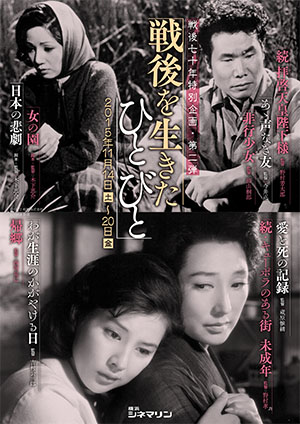 Yokohama Cinemarine
(Please note that this page was created using Google's automatic translation service and understand that because of this, its translation may not necessarily be accurate.)

As the second special project in 70 years after the war, we will hold a special screening of works depicting the lives of ordinary people after the war.
Black market, Bataya village, town, GHQ, war widow, mixed-race child, atomic bomb, repatriation ... How did people live and how were they portrayed the various incidents and problems that emerged during the post-war reconstruction period after World War II? In this milestone year, which is 70 years after the war, I would like you to see it again with your own eyes.
In addition, this screening is a collaborative project with the Japan Institute of the Moving Image and will be held as part of the script course class.