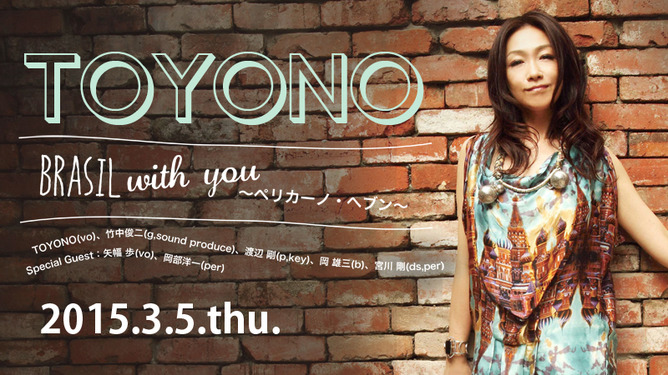 TOYONO BRASIL with you ~ Pelicano Heaven ~

TOYONO is a singer / songwriter born in Osaka. Studied under world-famous percussionist Marcos Suzano in Rio de Janeiro. After returning to Japan, he played an active part in various places such as the acoustic unit "Espirito" with Goro Ito (g), and has gained popularity as a vocalist with a genuine atmosphere. In 2007, he released his 3rd album "Pelicano Heaven" with guitarist Junji Takenaka as the producer. With the participation of top artists such as Suzano and Satoru Shionoya (p.), He received high praise from various fields. This time, in addition to Takenaka and other talented members who have been working together for many years, a special live will be presented with two guests. In recent years, she is sometimes called "Bosa Muse born in Japan". If you look at the stage, you will be able to understand the growing evaluation.