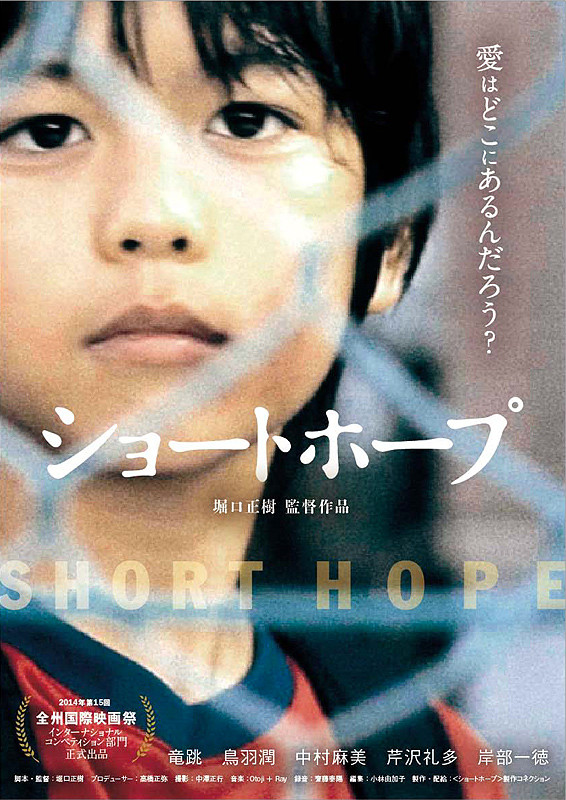 The loneliness of a boy who seeks "love" and "hope" at the mercy of the harsh reality of being blocked.

Kazuya, a fourth grader in elementary school, wants to meet his father, who doesn't even know his face, in the wake of his mother's death. He was determined and walked from Kamata to Yokohama to go to the strip theater where his mother worked.
Children, adults, unseen landscapes, intense hunger and thirst for the first time on the road. The loneliness of a boy who seeks "love" and "hope" at the mercy of the harsh reality of being blocked.

"Short Hope" was officially exhibited at the International Convention Division of the 15th Jeonju International Film Festival in 2014 and was praised by foreign media.
This is the first directorial work of Masaki Horiguchi, who studied under directors Yoshimitsu Morita and Junji Sakamoto as assistant directors, learned knowledge in the field, and gained a lot of experience. He wrote the script himself and took on the challenge of making his debut as a director.
The first experience of a boy jumping into the real world and being forced to treat him in the same position as an adult. In a modern society flooded with selfishness that only wishes to be "loved", I will once again reflect on the "loving" preciousness. A new masterpiece of a boy's movie was born in a Japanese independent film.

Written and directed by Masaki Horiguchi, directed by Yoshimitsu Morita such as "Lost Paradise," "39 Penal Code," and "The Black House," directed by Junji Sakamoto, such as "Tokarefu" and "The Goofball," and others. I took up the role of assistant director in the work and studied it. Then, in 2012, he wrote the script, raised funds from people who supported him, and completed the movie "Short Hope" in 2013.