Is the relationship something different?!

I received a DM of a colorful stall that seems to make winter fun.
The artist is Fuminori Ono, a textile and textile artist living in Tokyo.
When the Galerie Watts I work for opened (20 years ago), they sometimes came to visit me.
And the sender is Gallery Tiptoe in Hayama.
At the gallery that moved from Takarazuka to Hayama 10 years ago, the owner Kayoko Iwata often visited Watts before opening the Takarazuka gallery, talking about her dream, "I want to start the gallery someday," and it was realized. It was.

I was surprised that these two people were connected, and I missed them, so I went to Hayama to meet them immediately!

From Zushi Station, take a bus in the direction of Hayama, get off at "Kazehayabashi", and walk toward the residential area. There are quite a few houses with kayaks on the eaves, and it is truly a sea town. Somehow, the road markings are also fashionable.
(Since I saw it for the first time, when I checked it, it looks three-dimensional visually, so it seems to lead to speed suppression) 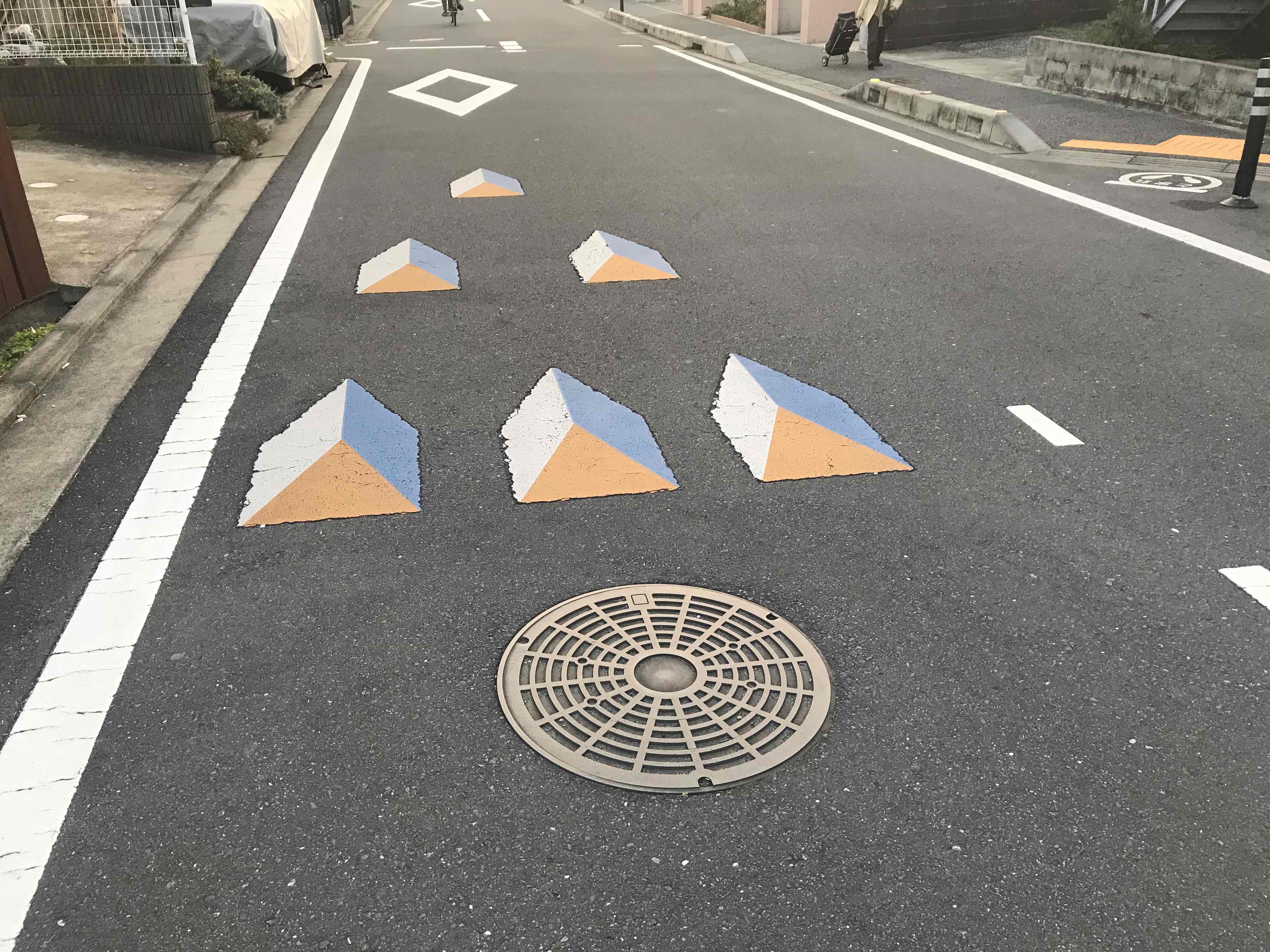 The house with the blue door is the gallery Tiptoe.
We mainly handle vessels, clothing, objects, and other items by artists who enjoy their lives. 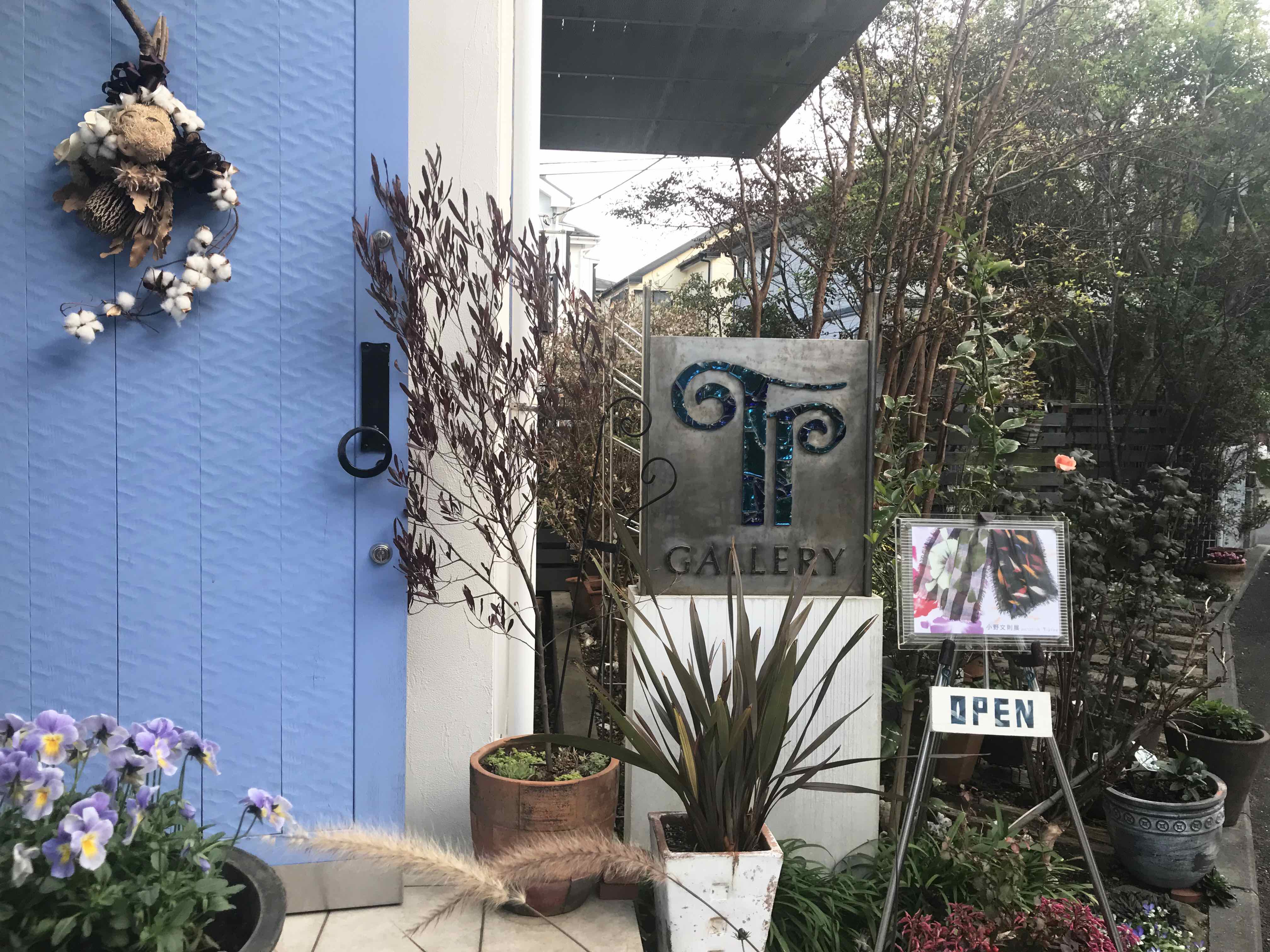 Just in the middle of the opening party, there are a lot of delicious dishes. This catering was done by the chef of Zushi's wine shop "a day", which has many fans, and while incorporating Hayama seafood and Kamakura vegetables, the dishes are studded with colorful colors like Mr. Ono's work. did. 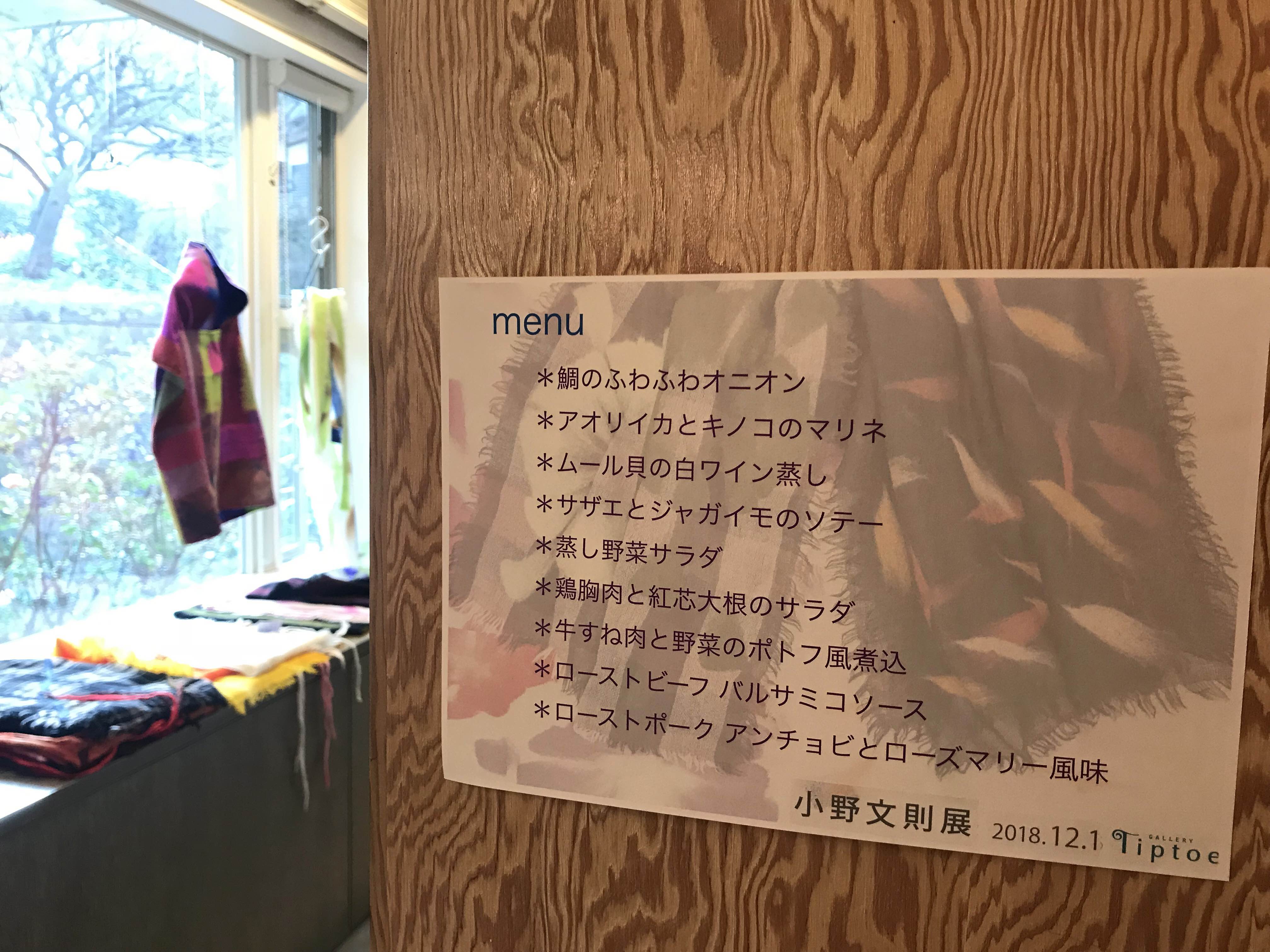 At Tiptoe, the menu will be organized according to the nuances of the exhibition each time.
“It's not only“ delicious ”, but it's also a great pleasure for elderly customers who have lived alone to say,'I'm looking forward to eating in a warm atmosphere,'” says Mr. Iwata. 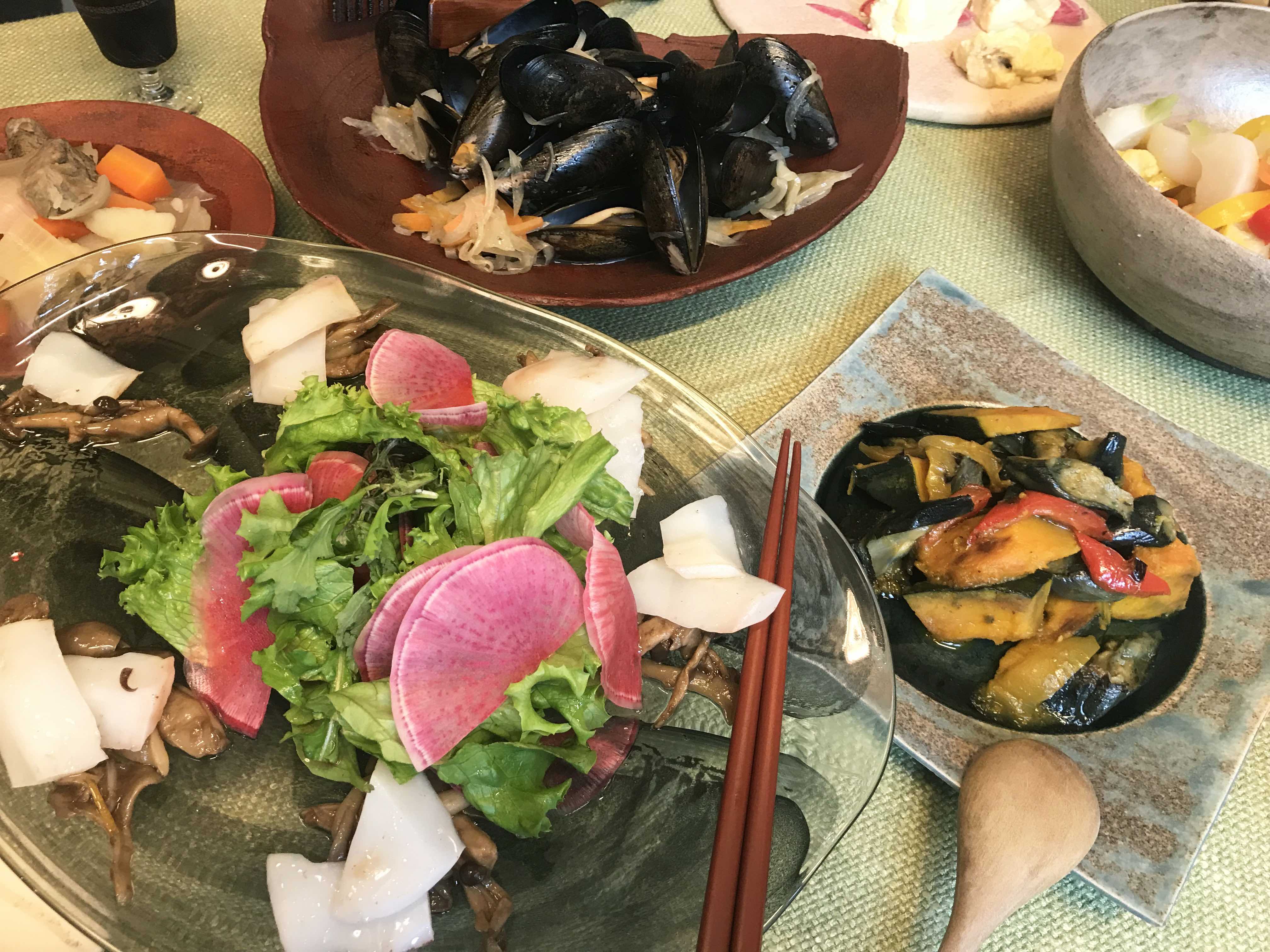 The table coordination using the vessels of the artists who exhibited here, such as ceramics, glass, and lacquer, is also beautiful, and you will learn how to use such vessels at home.
"I'm choosing a party vessel while thinking that it should be a little stimulus for both the customer and the artist. It's an exciting task for me as well." 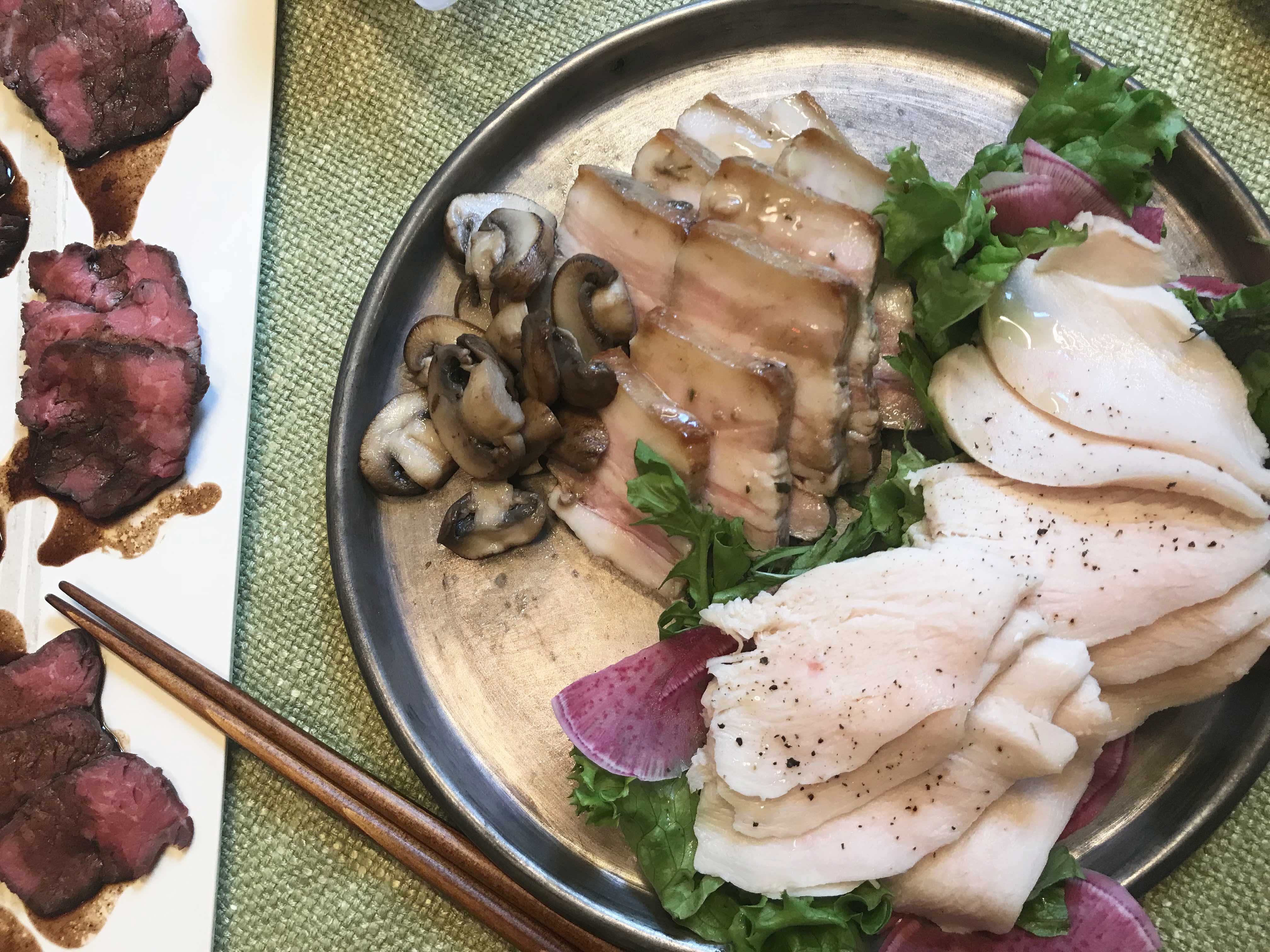 By the way, Mr. Ono, who plays the leading role, got a job at Issei Miyake after graduating from the Department of Design, Tokyo Zokei University and the Graduate School of Art, Musashino Art University. He said that he touched on the fun and potential of textiles.
From the details of the POP shirt, tie, and jacket that I wore, I could see the high sense of textile lovers. 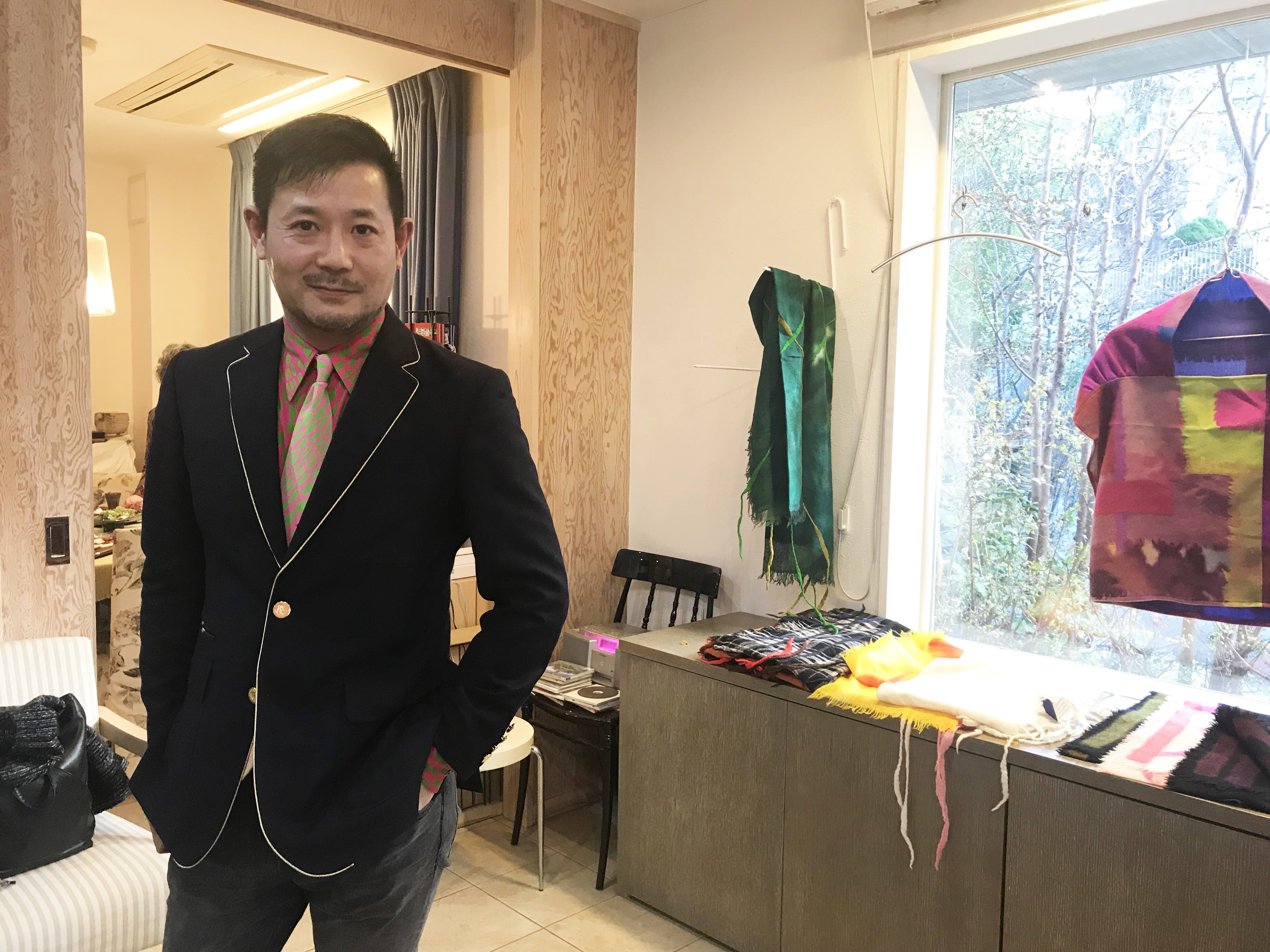 While independently producing art works made from paper and textiles, Mr. Ono also works on what he wears.
Iwata-san, who was fascinated by the work, gave me an offer more than ten years ago, and this is my sixth solo exhibition, counting from the exhibition at Takarazuka. 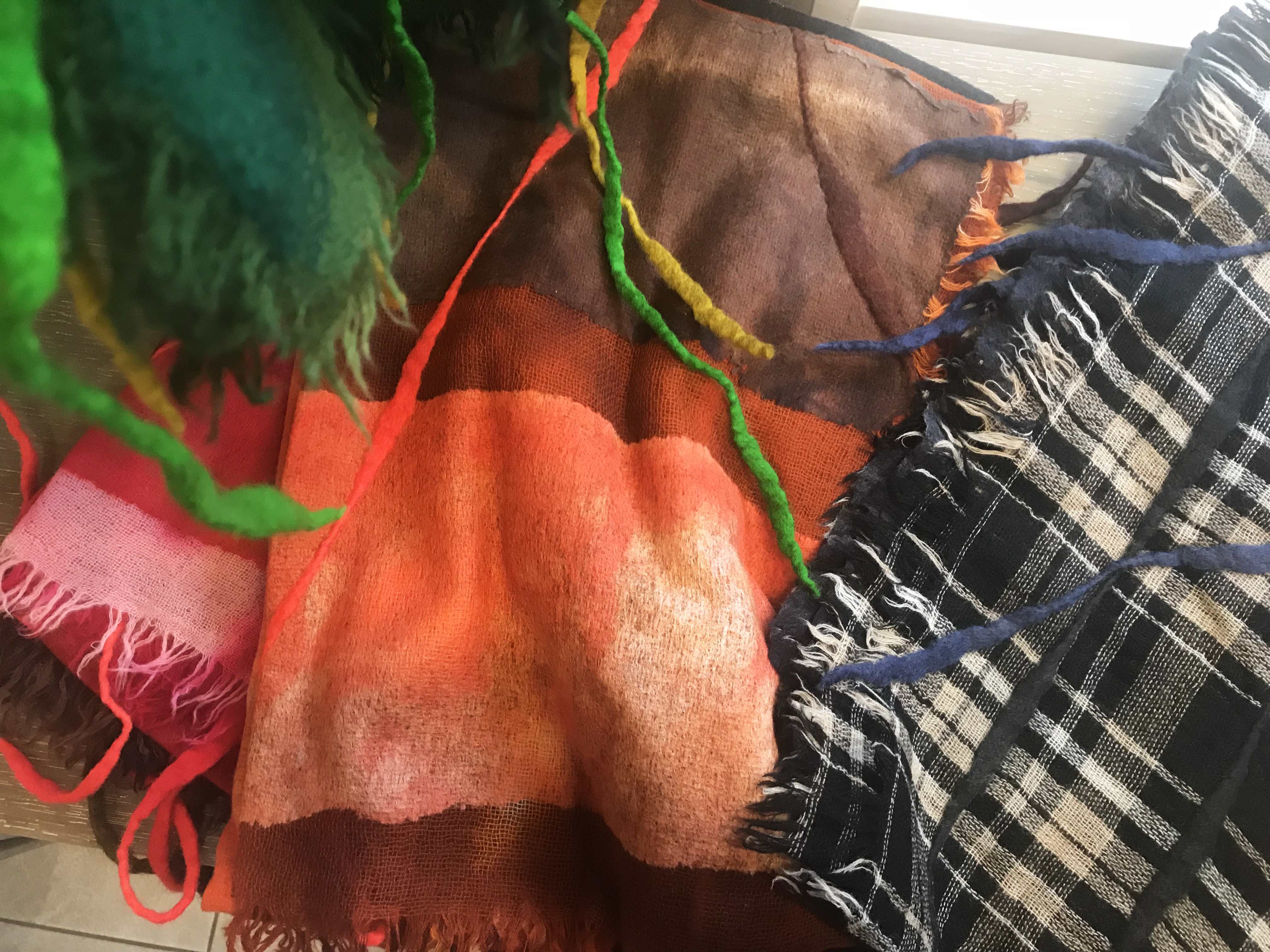 Mufflers and stalls dyed with wool and silk and combined with crimped felt add lightness to winter fashion, which tends to be dark tones.
The reason why you can feel not only the color but also the gorgeousness when you wear it is probably because the play unique to the modeling artist Ono is given. 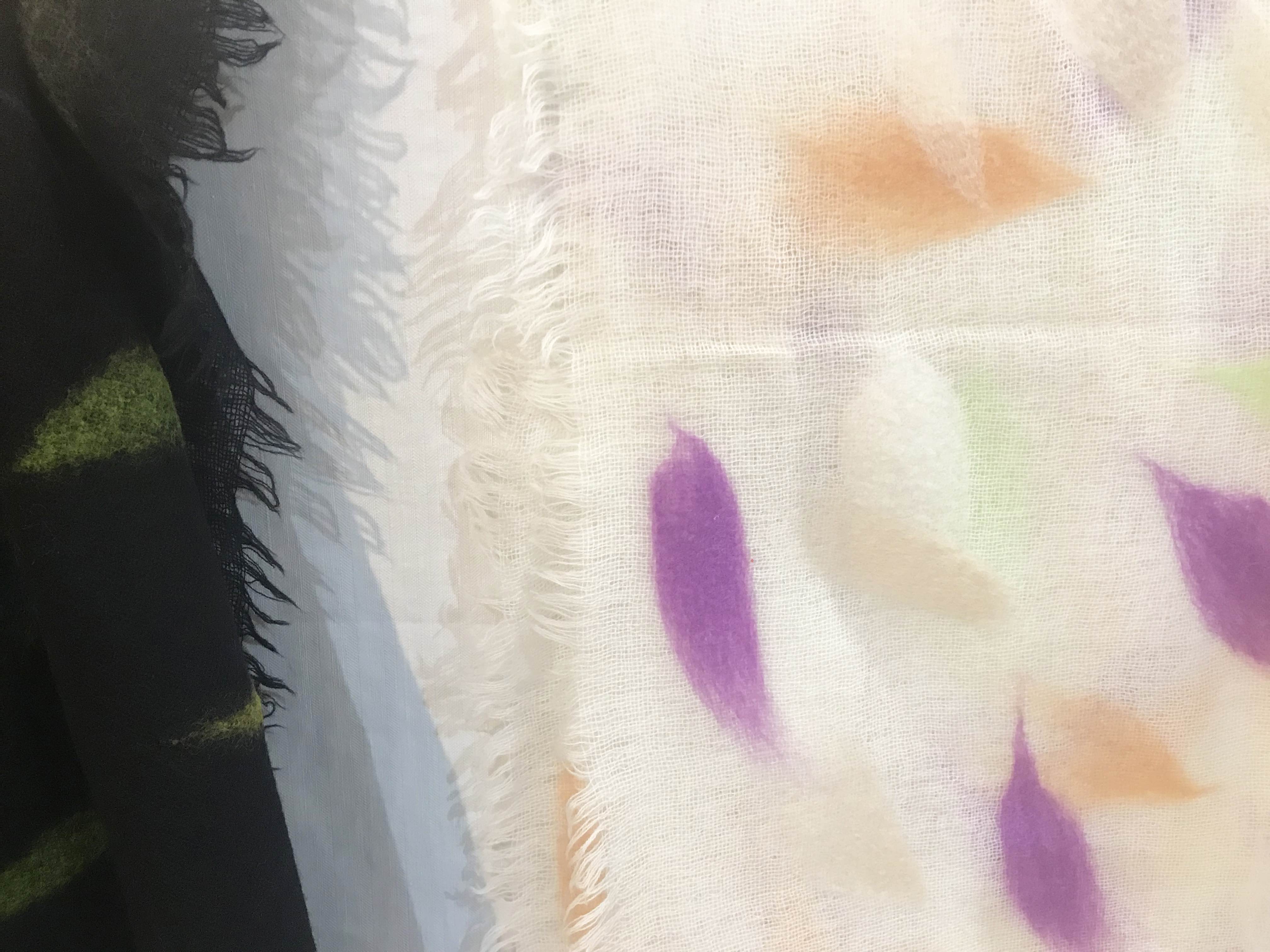 "Mr. Iwata loved roses and grew up in the garden, but at the beginning there was a request such as" with nuances that imaged roses. " I think. Now, I'm told to "try to do what I like" and I'm free to play. "
The creation created from the relationship of trust between the artist and the gallery still attracts customers. It was crowded with customers who had been looking forward to it since the DM arrived. 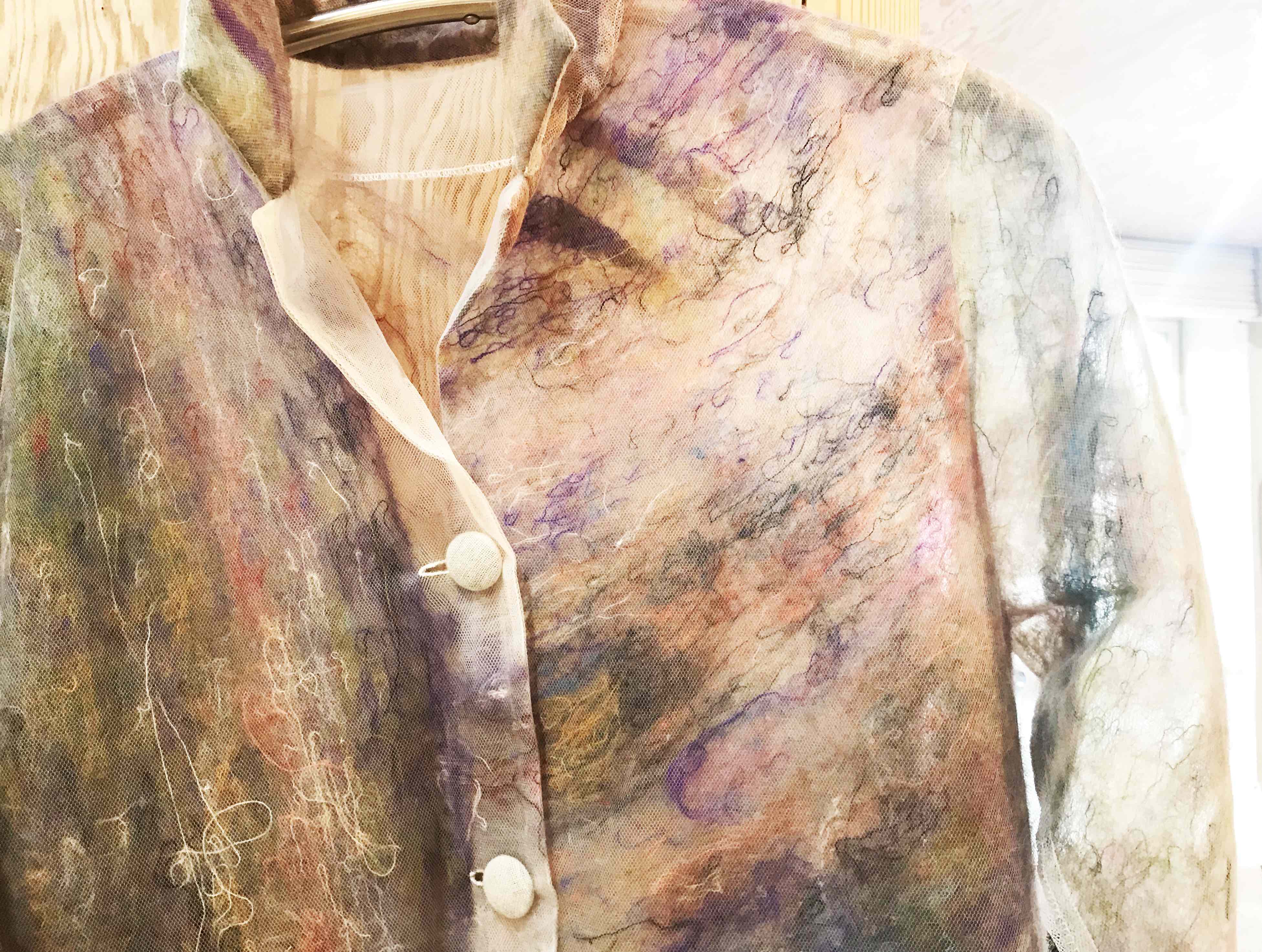 The coat exhibited this time, in which colorful yarns are trapped in a mesh, has an impact like an abstract painting. 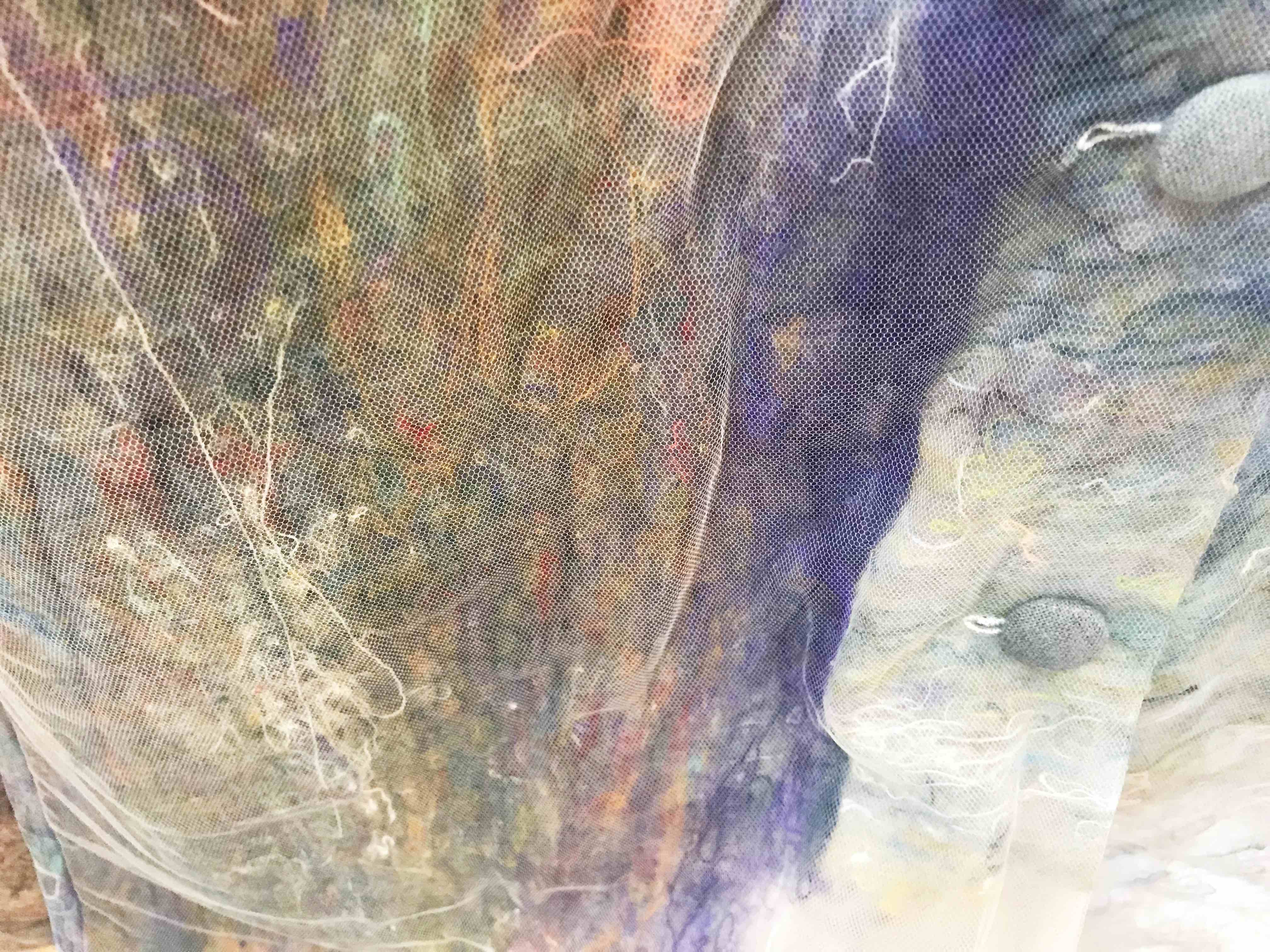 “I can't sew, so when I make clothes, I leave it to my friends who trust their sensibilities,” says Ono. When I was listening to the story, I was surprised to find out that he was a friend of mine! The world is small (laughs). 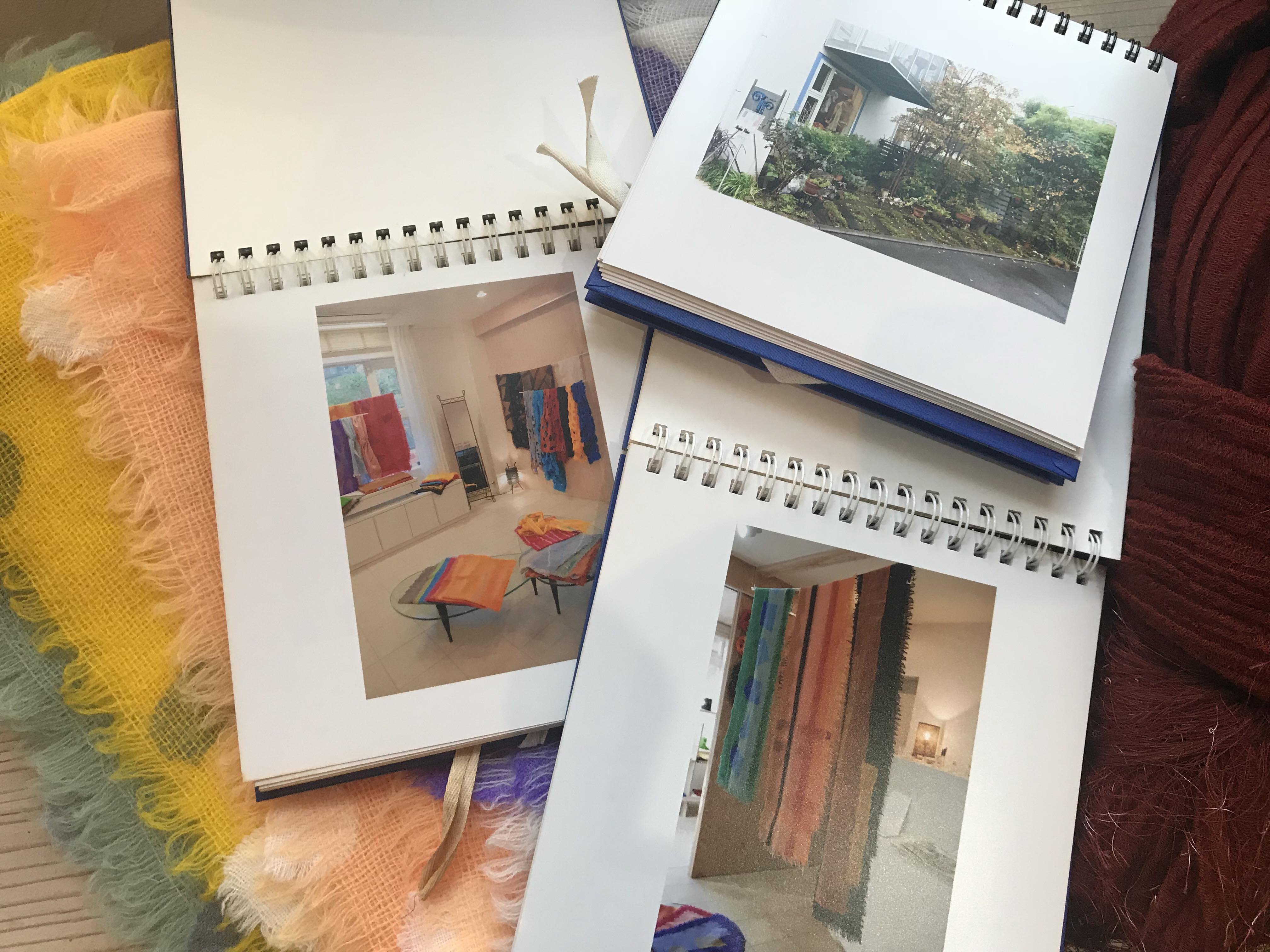 The great thing is that Tiptoe has been making a book that summarizes the artist's solo exhibitions as a record every time since he moved to Hayama. The photographer who was visiting for Mr. Ono's 4th book reunited with my nostalgic face again!
Photographer Masaharu Sato has lived in Hayama for 15 years. Participating in the long-standing Hayama Arts Festival (co-sponsored by Hayama ART WALK since 2018), we are enlivening local cultural and art projects. 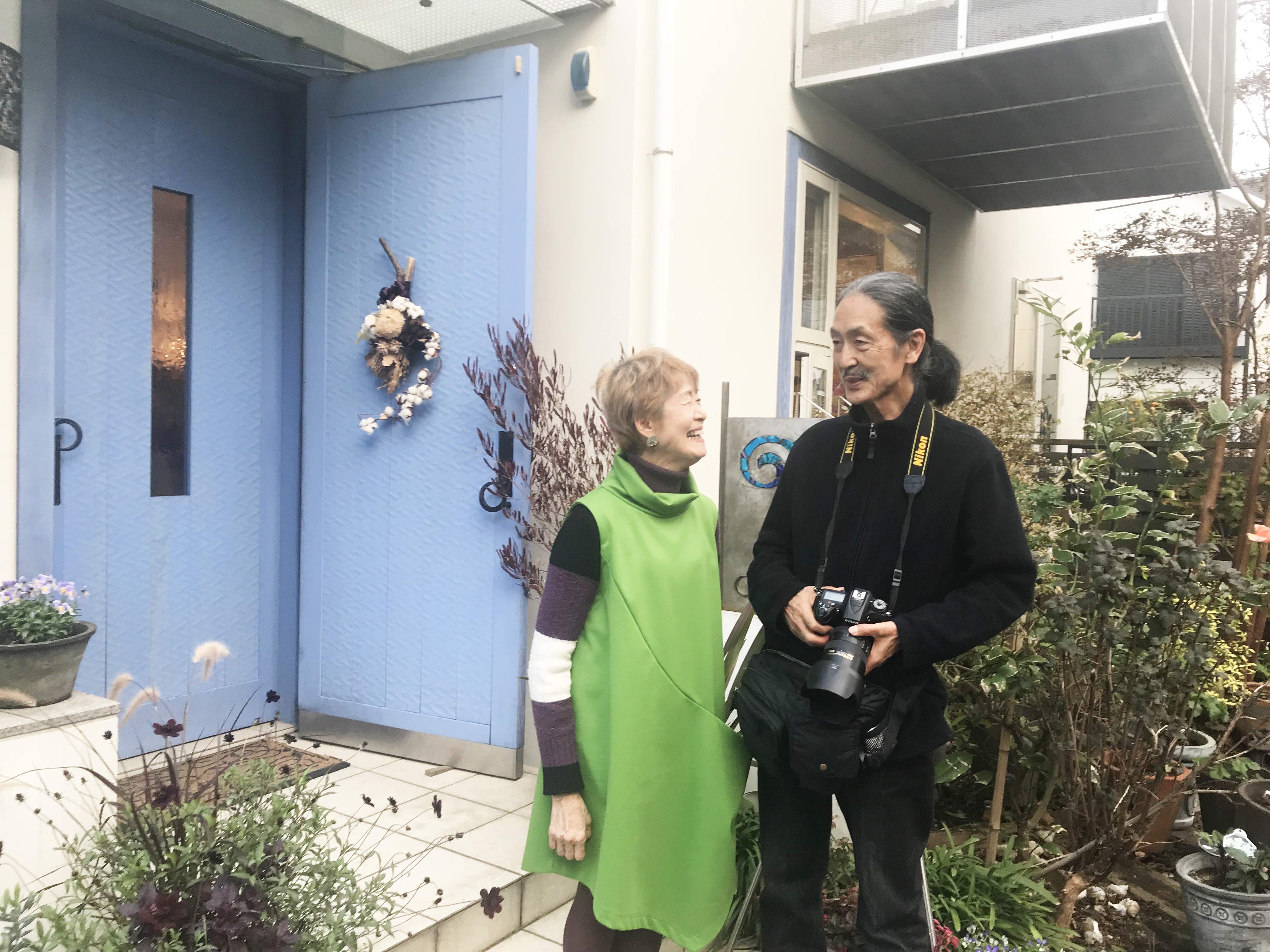 It seems that Mr. Iwata decided to move to Hayama after introducing Mr. Sato to Mr. Iwata a long time ago, and it seems that Mr. Sato took pictures including DM.
It was a nice time to look back on the history of Watts because of the overlapping of these relationships that appear one after another. 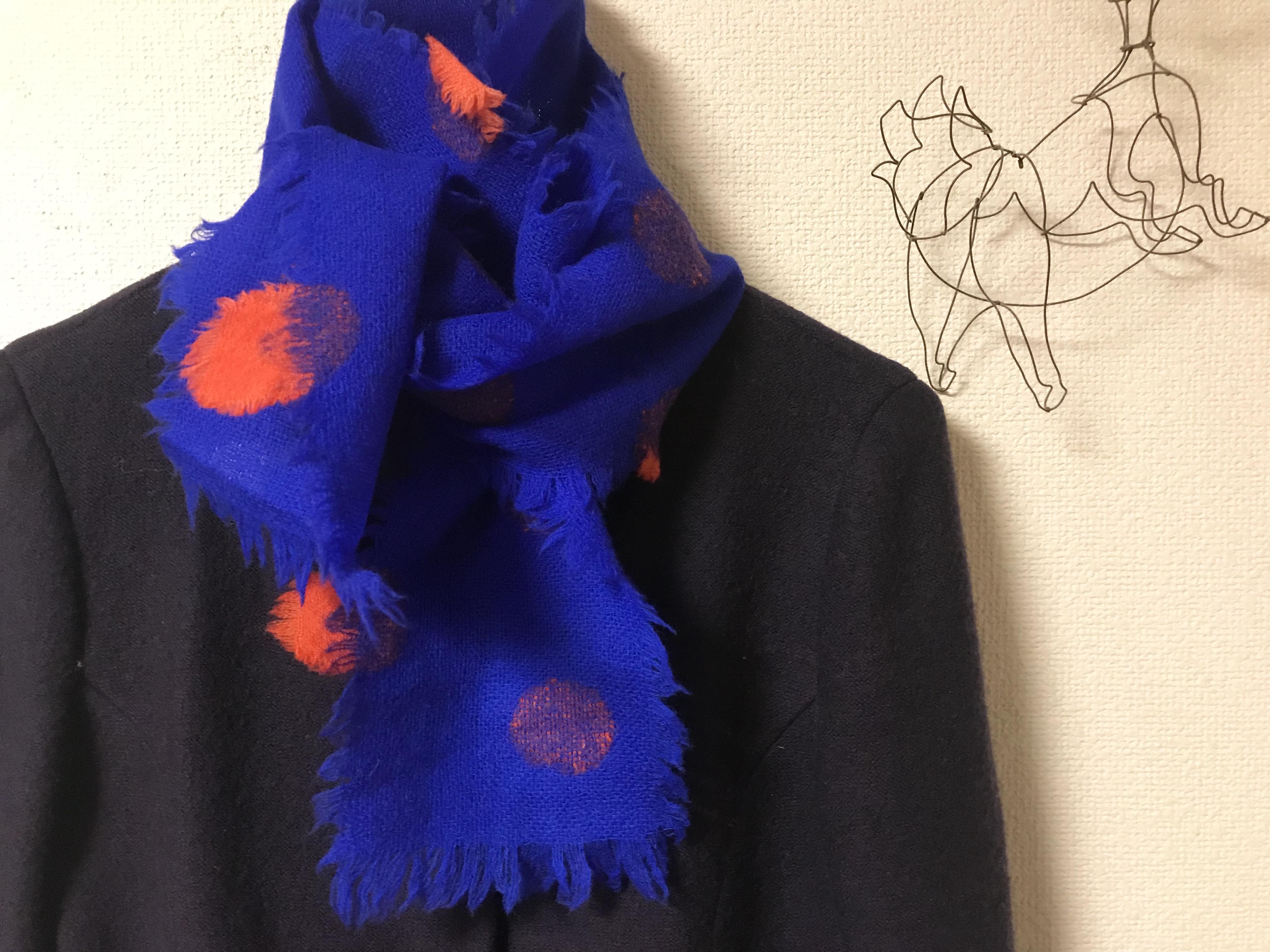 And I brought back a vivid dot muffler. Immediately, I am incorporating it into the fashion colors of autumn and winter.
People I met praised me as "beautiful colors", and this muffler acted as a mediator for communication. The edge that spreads from there is also fun! is not it.

* Opening days: Basically, it is permanently open on Thursdays, Fridays, and Saturdays. Open during the special exhibition. (Reservation required for those who wish to visit on Sunday)