A Noh theater transformed into a museum! An art world where you can grin and think about deep themes

Akira Yamaguchi, who presents a series of works that combine traditional Japanese painting styles with contemporary motifs, will present installation works at the Yokohama Noh Theater — this is the only way to go! Because, Mr. Yamaguchi is a handsome contemporary artist who is popular with art girls because of his cool style as well as his humorous style. What is he trying to do in the Noh Theater, which can be called the Japanese Classic Hall of Fame? I went out with interest. 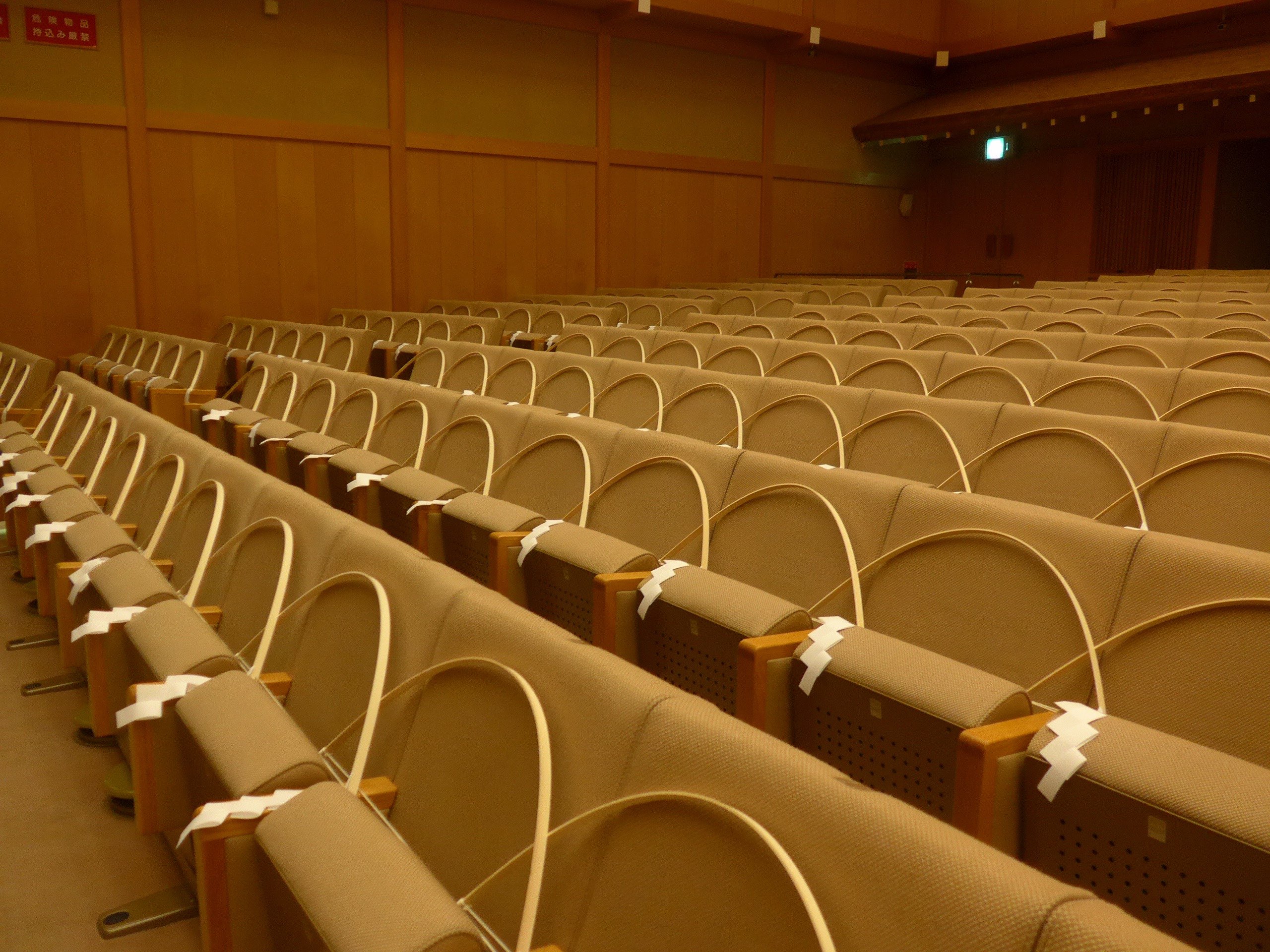 This exhibition is in line with the Yokohama Noh Theater performance "Fuya to Mujou-The World of Shura Noh". In other words, while depicting the characters in "The Tale of the Heike" and the state of the battle, the world of unrelenting behavior unfolds ...?
After passing through the same lobby as usual, first go to the audience seats on the first floor. A bow is placed on each seat, and when you look around, it looks like a "Qinghai wave" pattern. From behind the scenes, the sound of flowing water is faintly heard, reminiscent of the world of water where the Heike people sank in Dannoura. 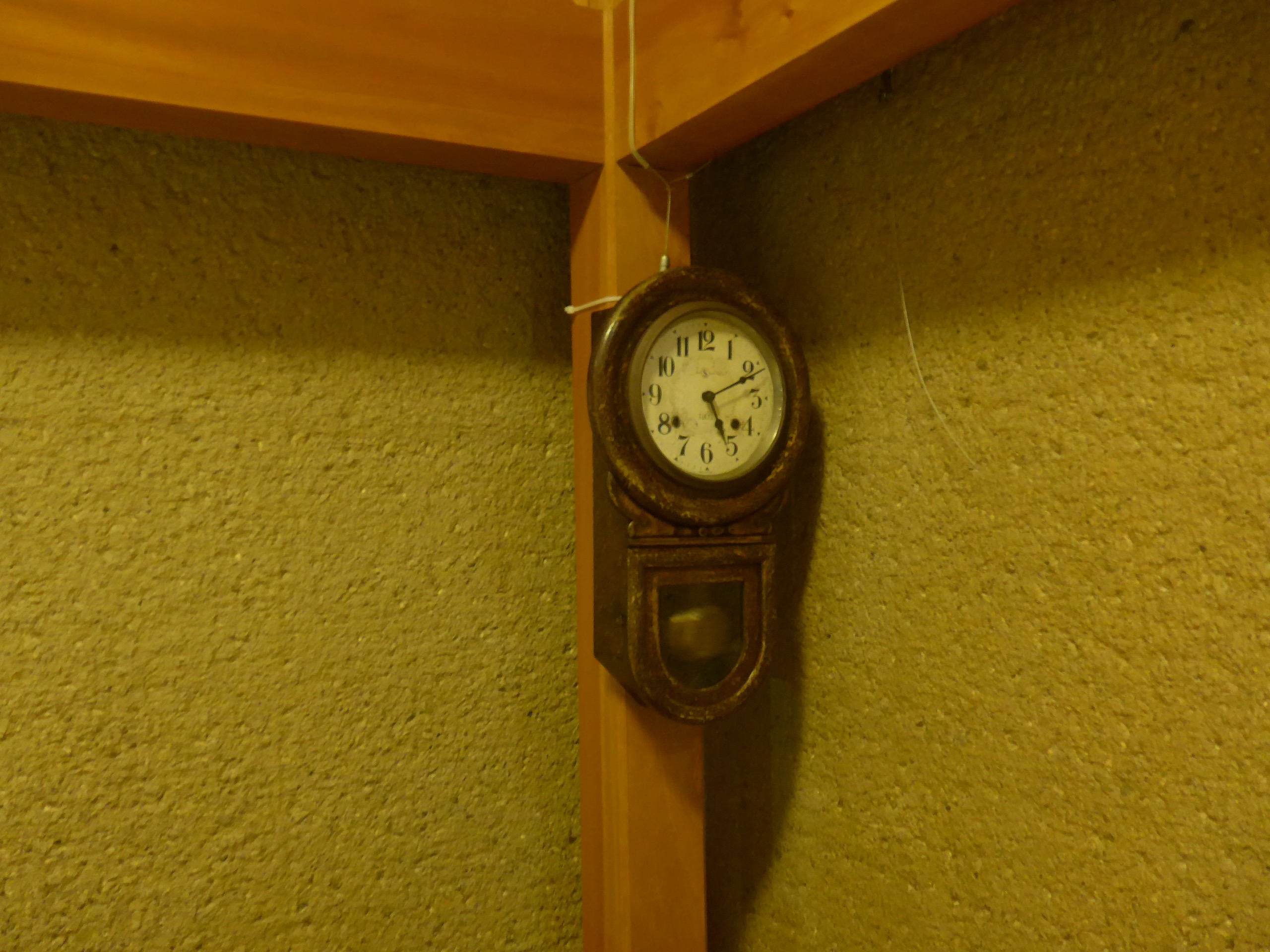 When I heard that there was an exhibition in the lobby on the 1st floor, I found an old wall clock in one corner. Is this also an installation?
On the stage, you can feel the passage of time with "water", and in the lobby, you can feel the time with a ticking sound. Is it a taste to experience various time axes? By the way, the time of the wall clock may be greatly different, but it seems that it leads to the space where time flows in parallel-the world of Noh where the past and the present exist in parallel. 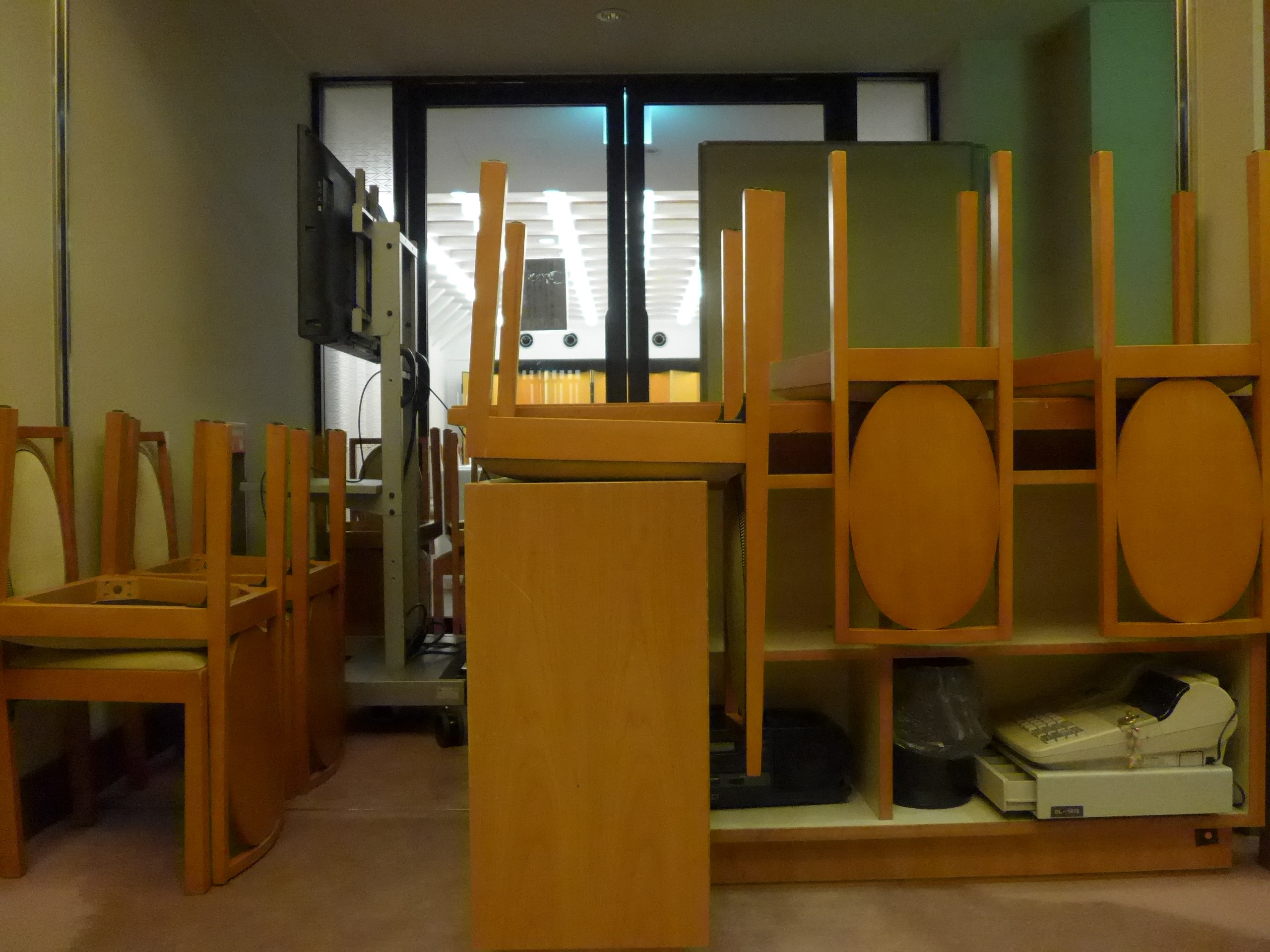 When I went up to the second floor, chairs and tables were piled up in front of the break room. This is, of course, part of the installation.
The party-style table setting prepared in the back room is an image of a "phantom feast" in which "Hoichi the Earless" was taken to the ghost of the Heike. So, are the chairs and tables piled up in the foreground the real world, that is, the graveyard?

In the glass case where Nogaku materials are usually displayed, various tools pulled out from the Nogaku hall's storage are displayed as "works" along with Mr. Yamaguchi's paintings. Noh masks, tubs used on the stage, clothing girders for displaying costumes, jugs in the dressing room, screws and nails picked up from the tool box. Mr. Yamaguchi walked around the Noh theater and combined the selected items with his own paintings to form the whole.
Some of the paintings are unfinished at the time of the opening, but according to the person himself, "I plan to complete it using the closed days." If you visit several times, you may be able to enjoy the "evolution" of the work. 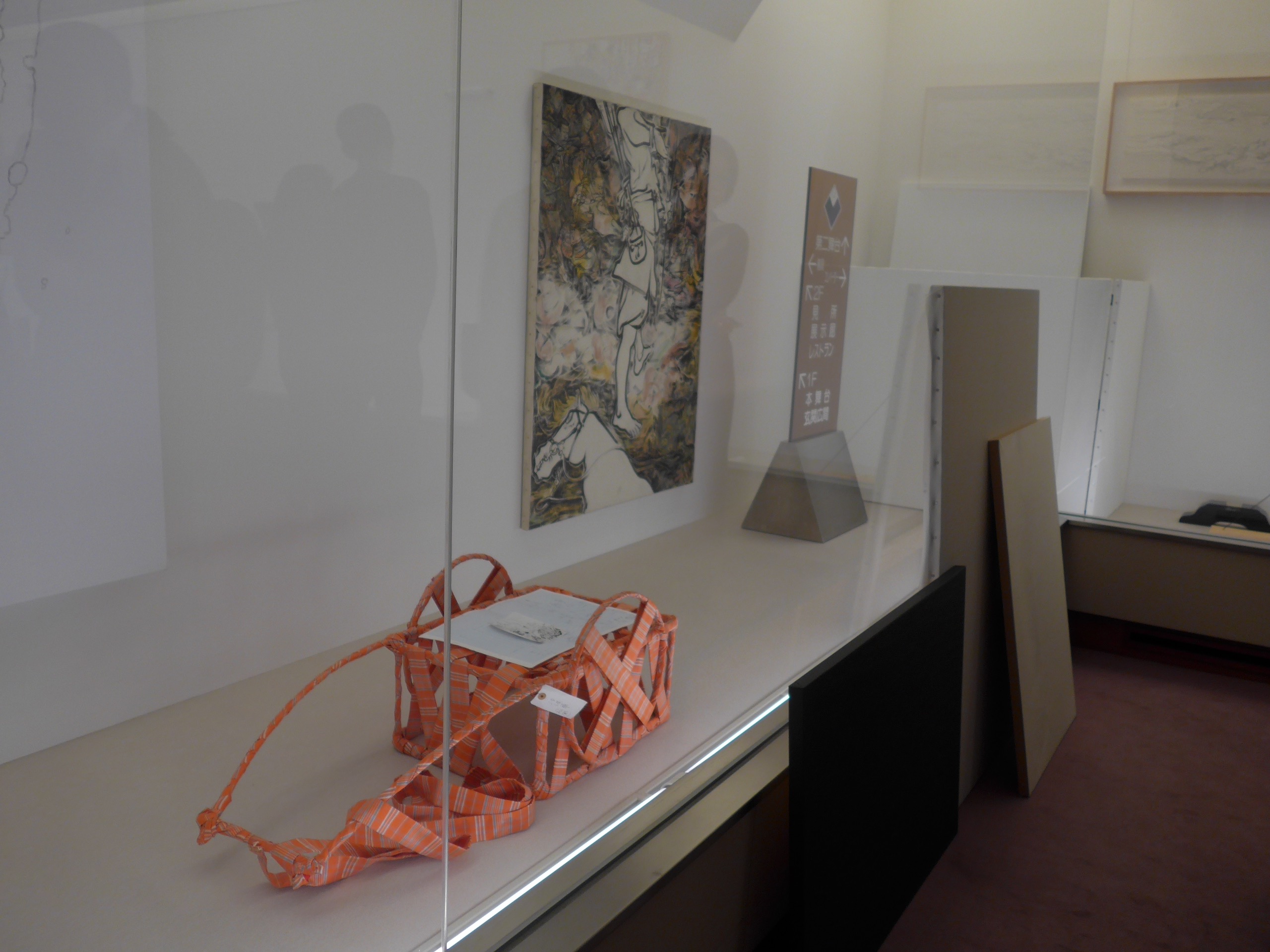 A panel that is casually leaned in front of the glass case. Still in production? Of course, this is also part of the installation. It seems to be contemporary art that the information board is displayed in the glass case with a clear face.
The theme that flows throughout is "sea" or "waves". The rise and fall of the Heike clan overlaps with the tragedy that struck Tohoku.

Recognize? do not know?

Rather than thinking hard, I wonder if I should feel free and enjoy myself. 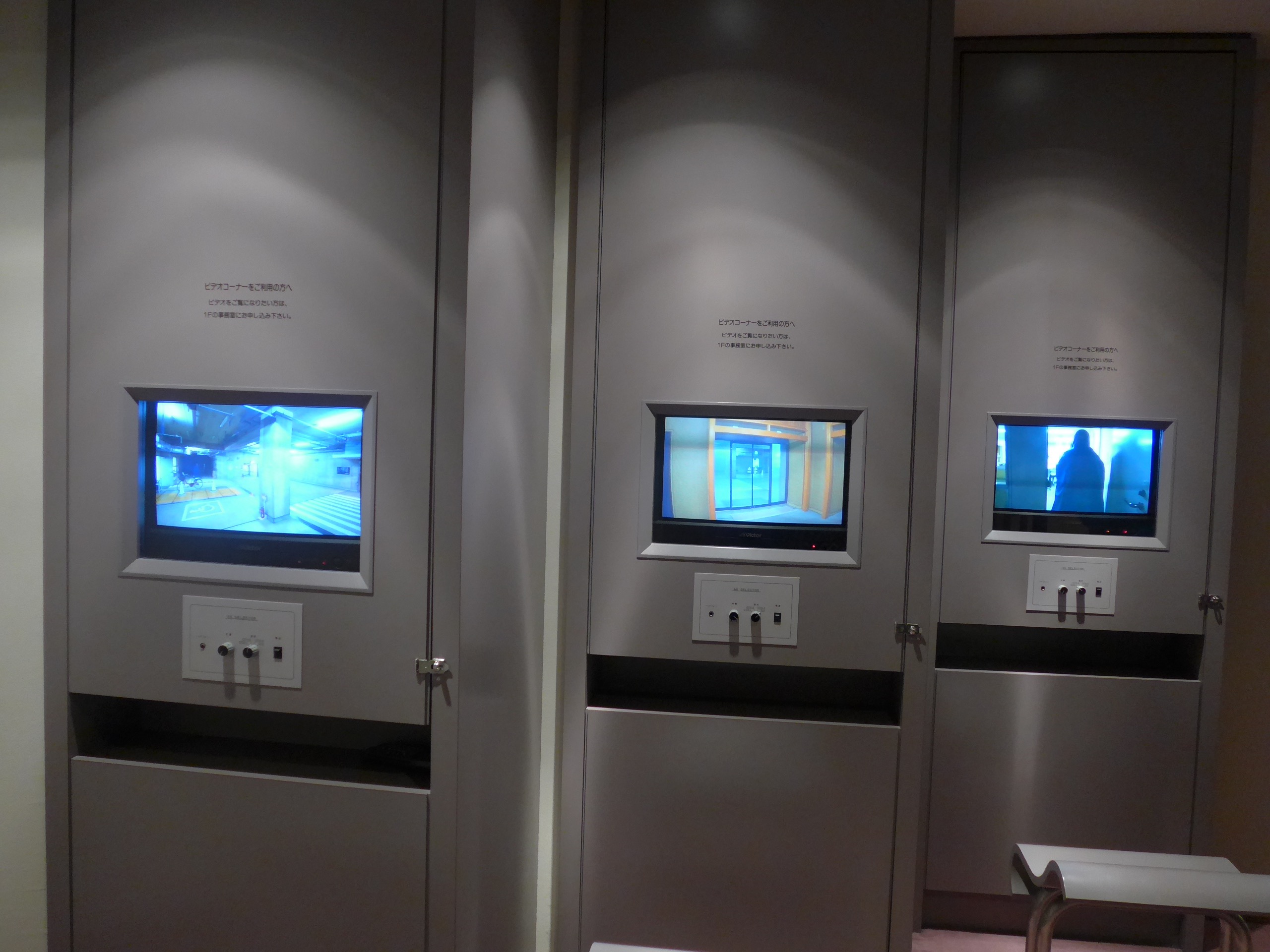 In the video corner, the (?) Video played by Mr. Yamaguchi himself is played endlessly.
The title of the work is "Release ability".
The message that the artist should send, there is something that can be done because it is art ... I felt.