The world of art that you can go, see, and feel
File.2 Yokosuka Arts Theater Backstage Tour

Yokosuka Arts Theater is a fulfilling hall with a large theater with full-scale opera house specifications, which is one of the few in Japan. On the stage, top stars from various fields, including Japan's world-class maestro Seiji Ozawa, from classical music to musicals and classical performing arts, have been in the spotlight.
Don't hesitate to go! 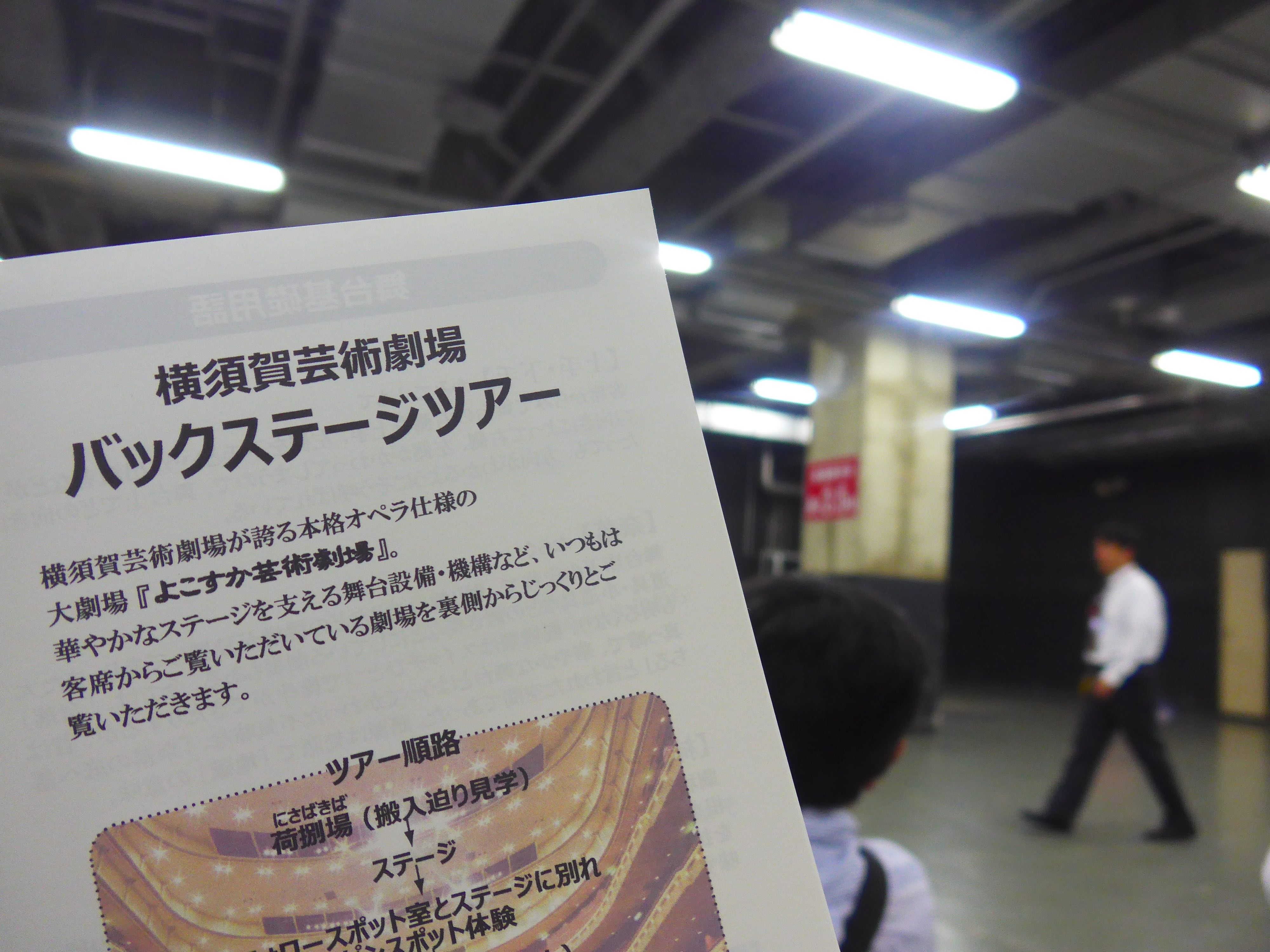 The meeting is at the carry-in entrance near the parking lot entrance. When I pushed the heavy door open and entered, there was a huge space that could store the entire large trailer. I don't know that there was such a place in a place I don't usually notice ... 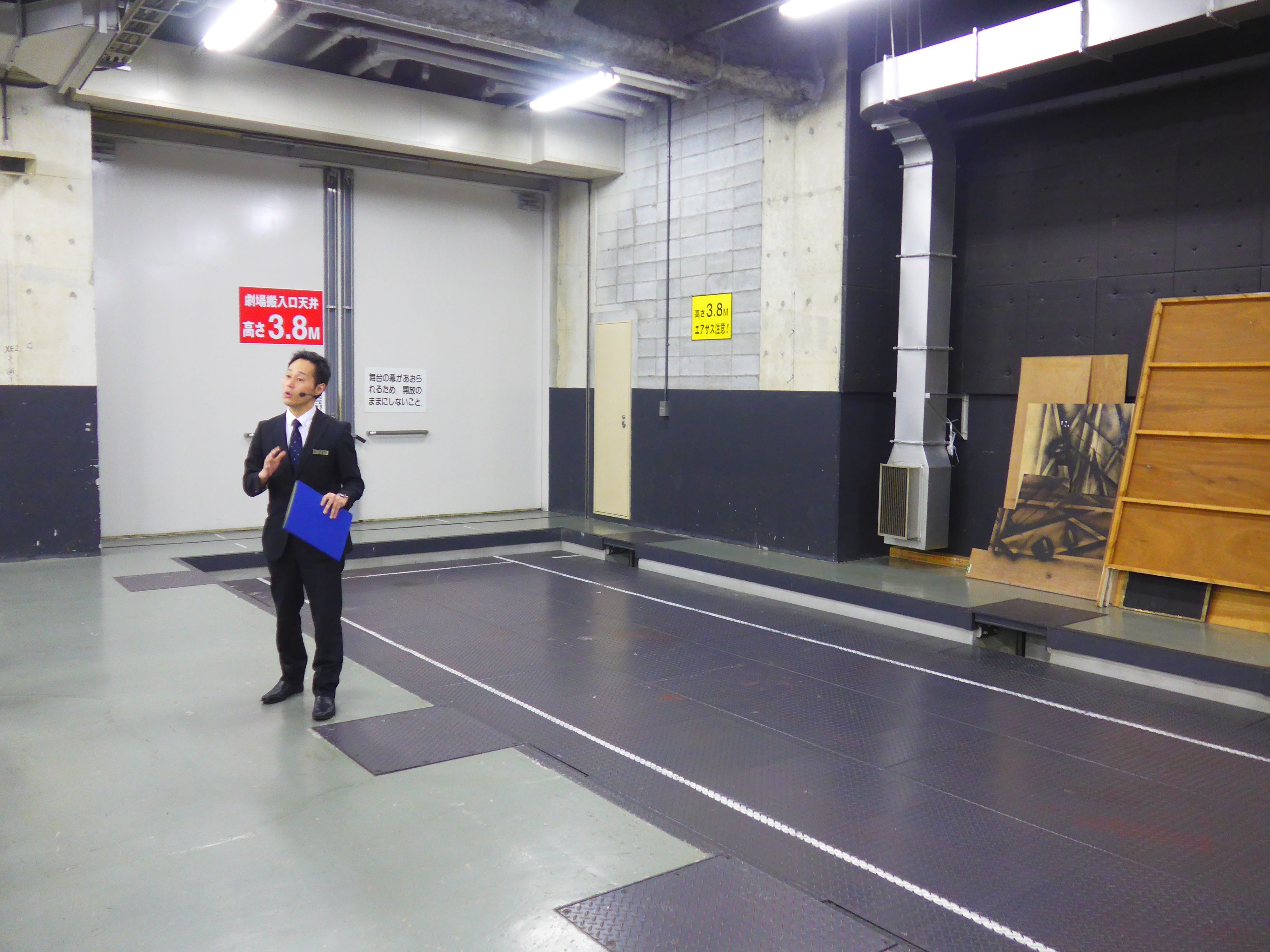 Right next to it is the so-called "Naraku" under the stage of the big theater. The main stage set that carries stage equipment and equipment to the stage can carry up to about 25 tons.
There are many dangerous places behind the scenes, so everyone listens carefully to the precautions during the tour.
Finally, take the large elevator that can load up to 4 tons and go upstairs! 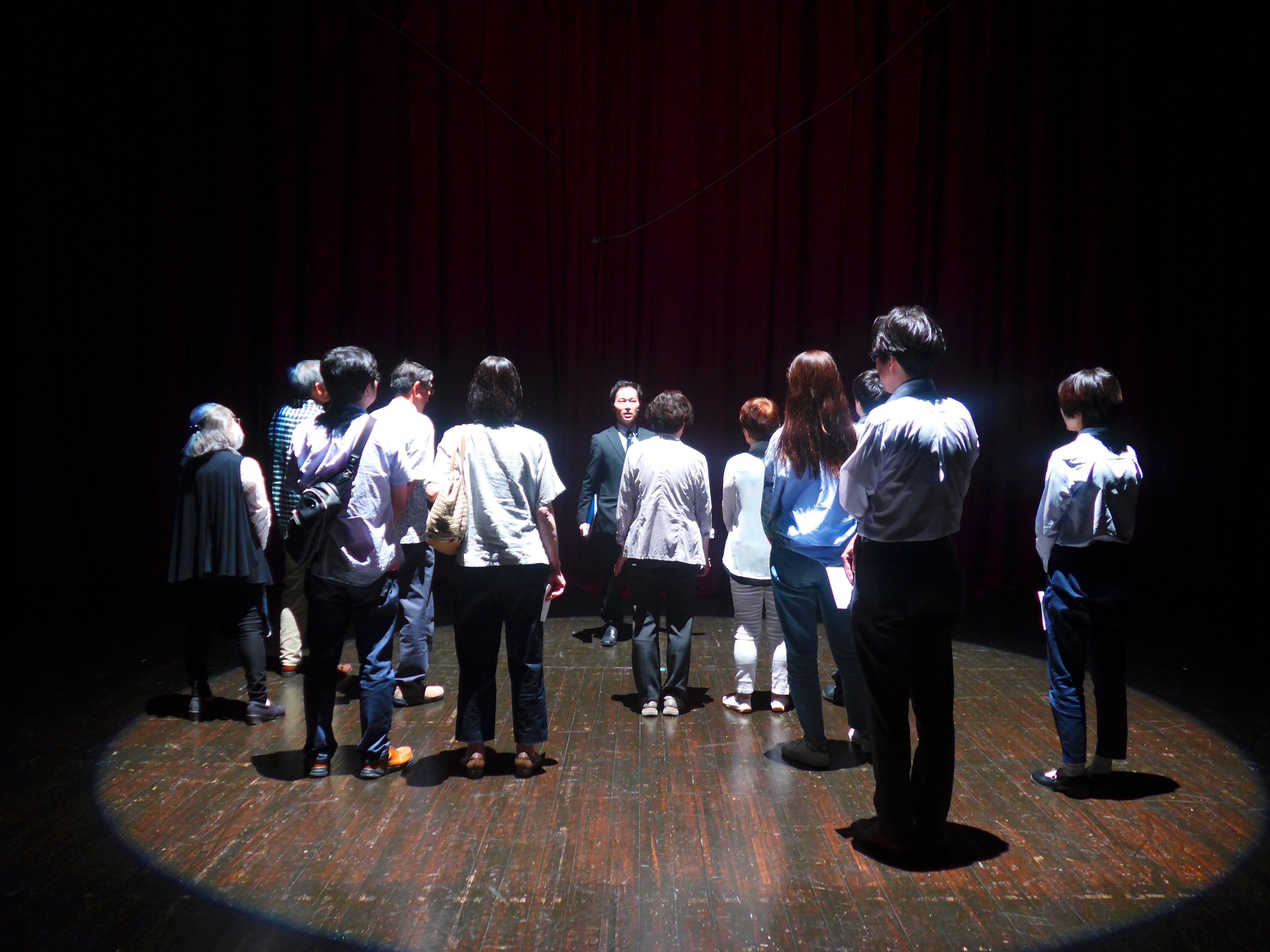 When you get off the elevator on the 3rd floor, you will find the stage sleeves of the big theater. A bright ring of light is formed in the middle of the stage, and a bright red opera curtain descends beyond it.
Out of nowhere, I heard the tuning sound of the orchestra and the noise of the audience seats ... 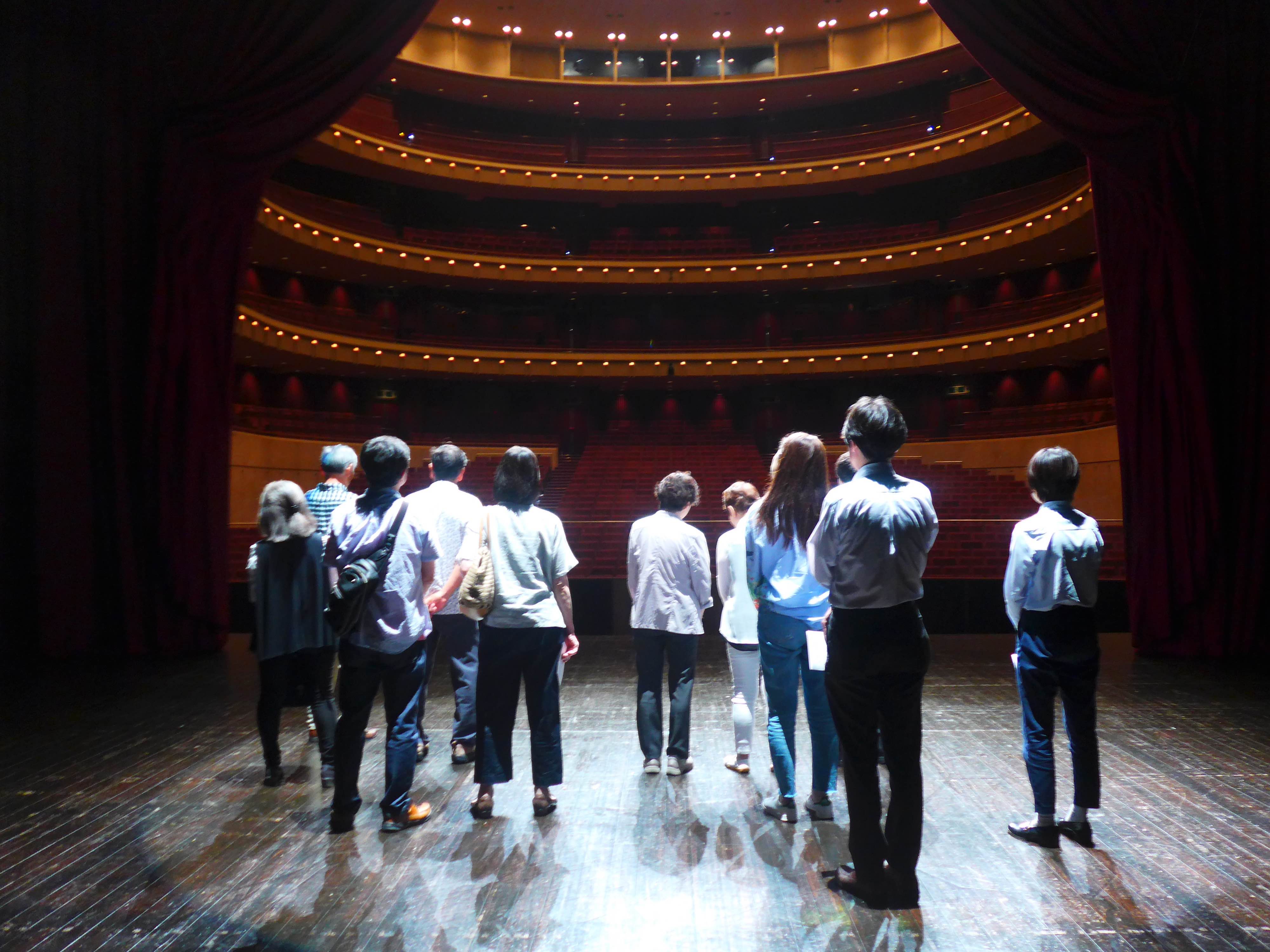 When the curtains open with magnificent music, you can see 1806 seats up to the balcony on the upper floor!
An inspiring moment suitable for the "opening" of the backstage tour!
After taking a commemorative photo with all the participants, they will be divided into two groups and each will experience the stage mechanism. 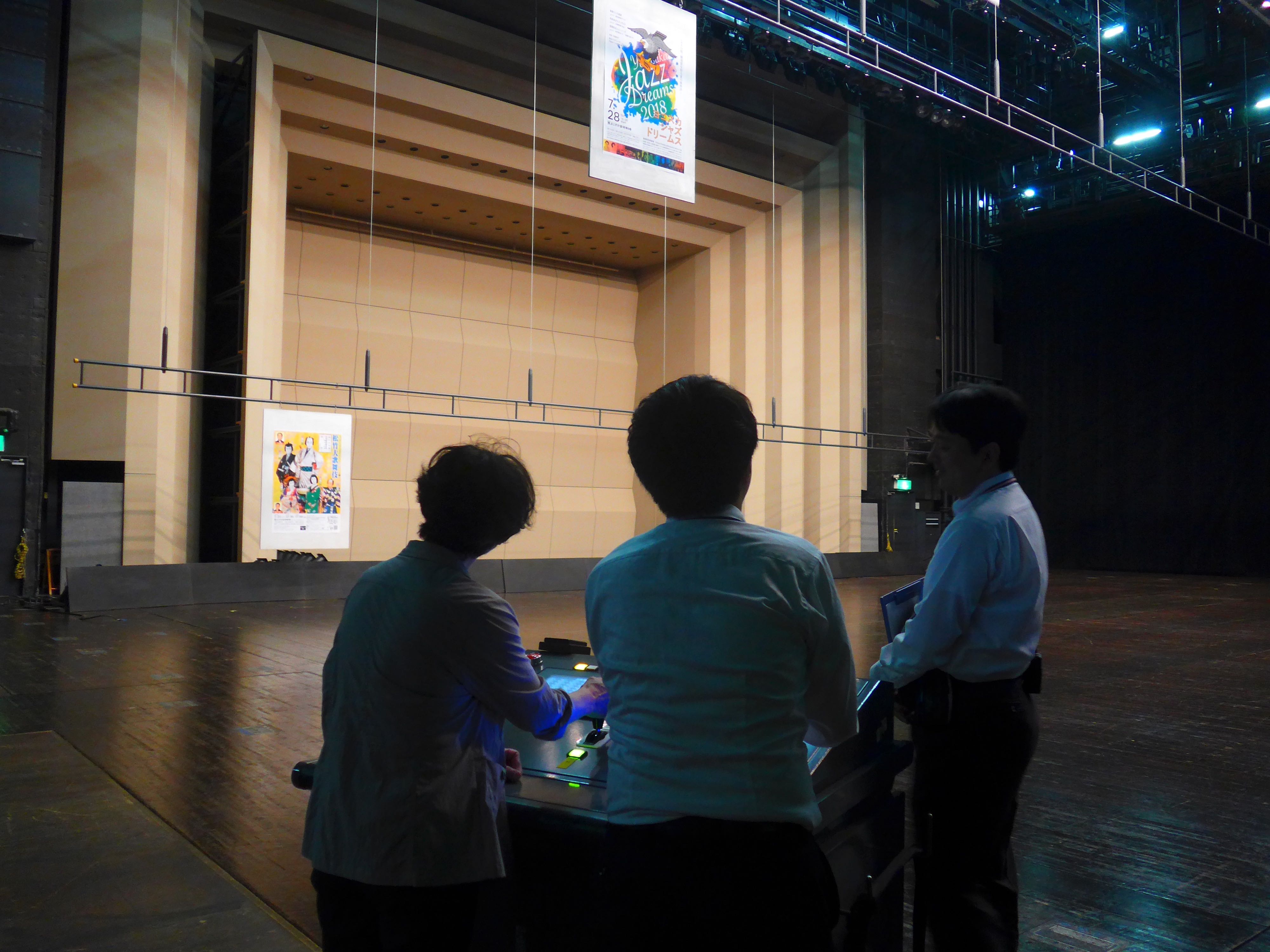 The team remaining on the stage first experienced the operation of the art baton. 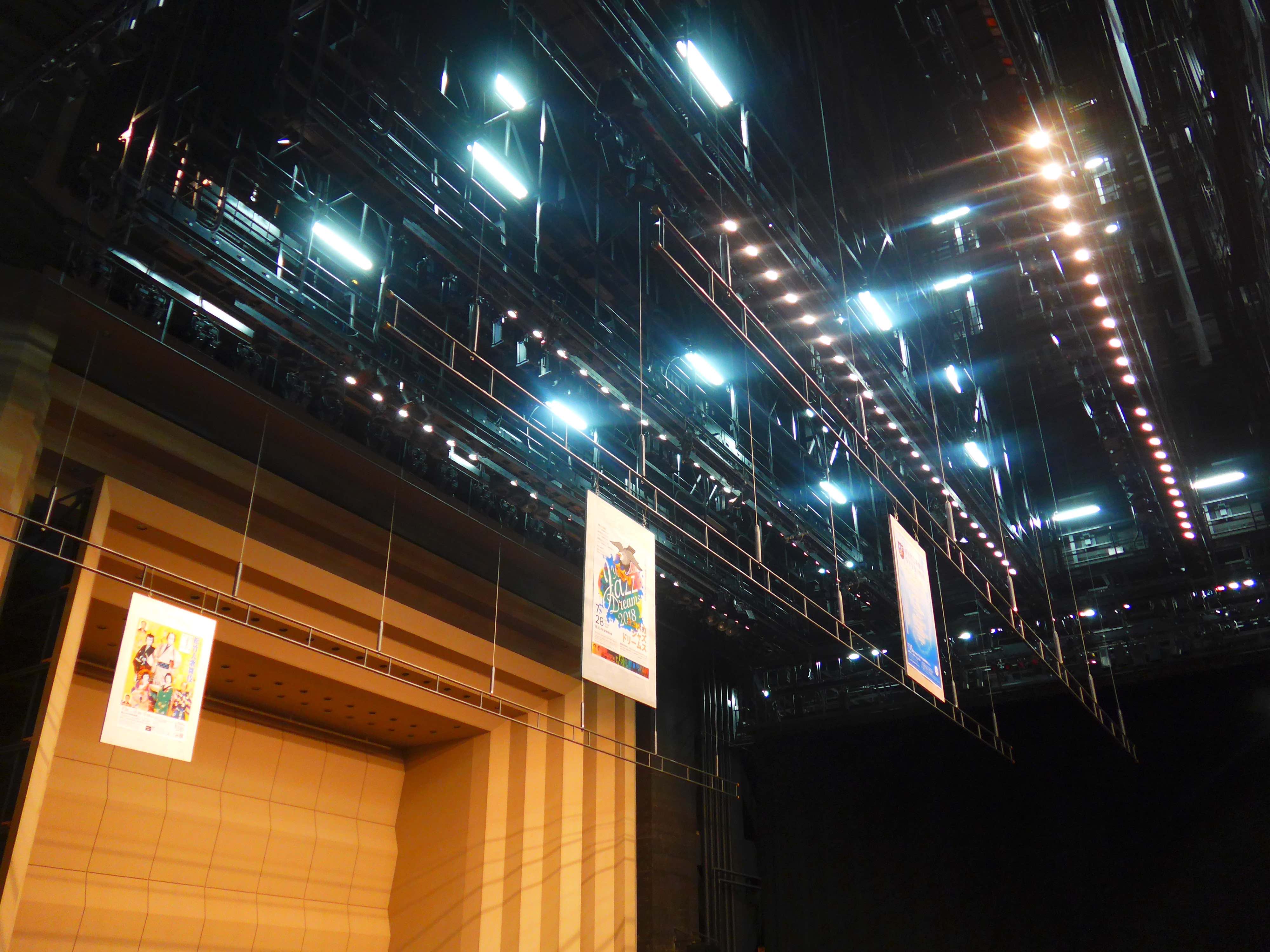 Far above the stage, there are 50 "art batons" that hang equipment and curtains. Experience the operation of raising and lowering this baton on the console. Somehow I'm thrilled.

A dazzling spotlight on the dimly lit stage ...!
According to the explanation, the members of the team who went upstairs are operating the spotlight. 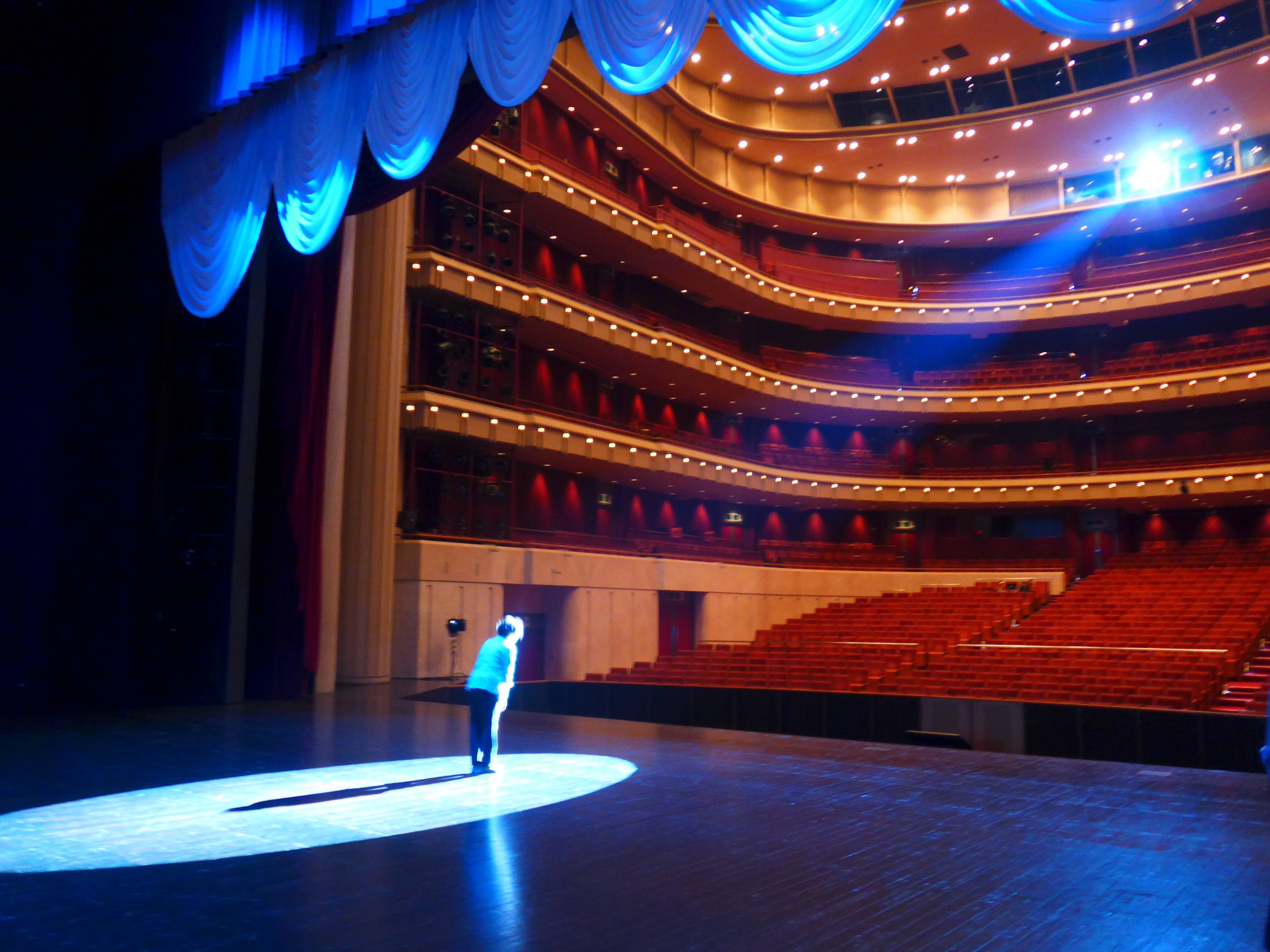 It doesn't matter who is illuminating. It's a never-ending opportunity to be in the spotlight on an opera house-style stage. Overcome glare and embarrassment and enjoy the mood of prima donna.
I'm a star! 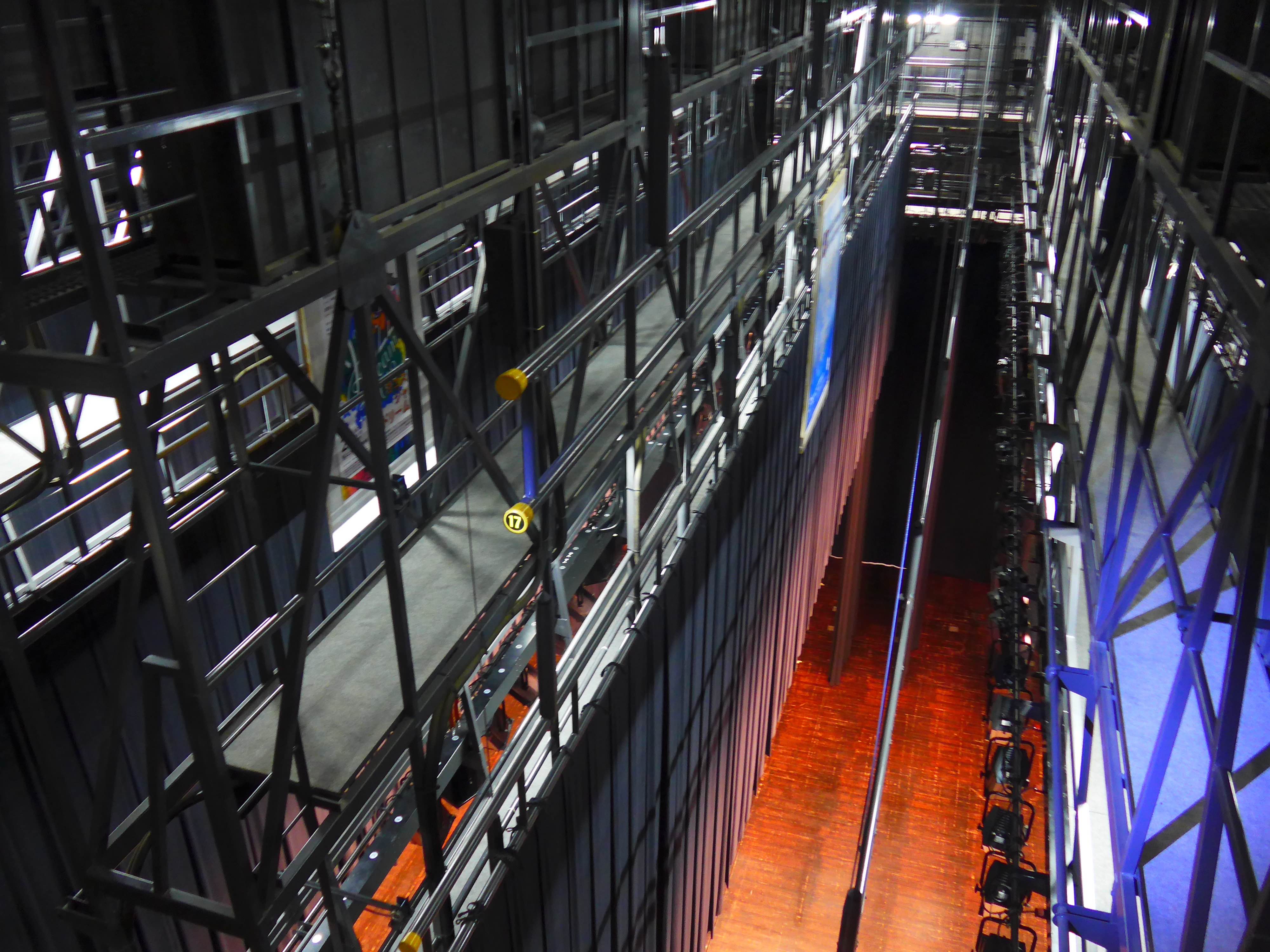 When I took the elevator to the 7th floor, I found a space called "Gallery" above the stage. Literally behind the scenes, with lighting equipment and sets hanging. Looking down on the stage, I was thrilled again at a height that dazzled me. 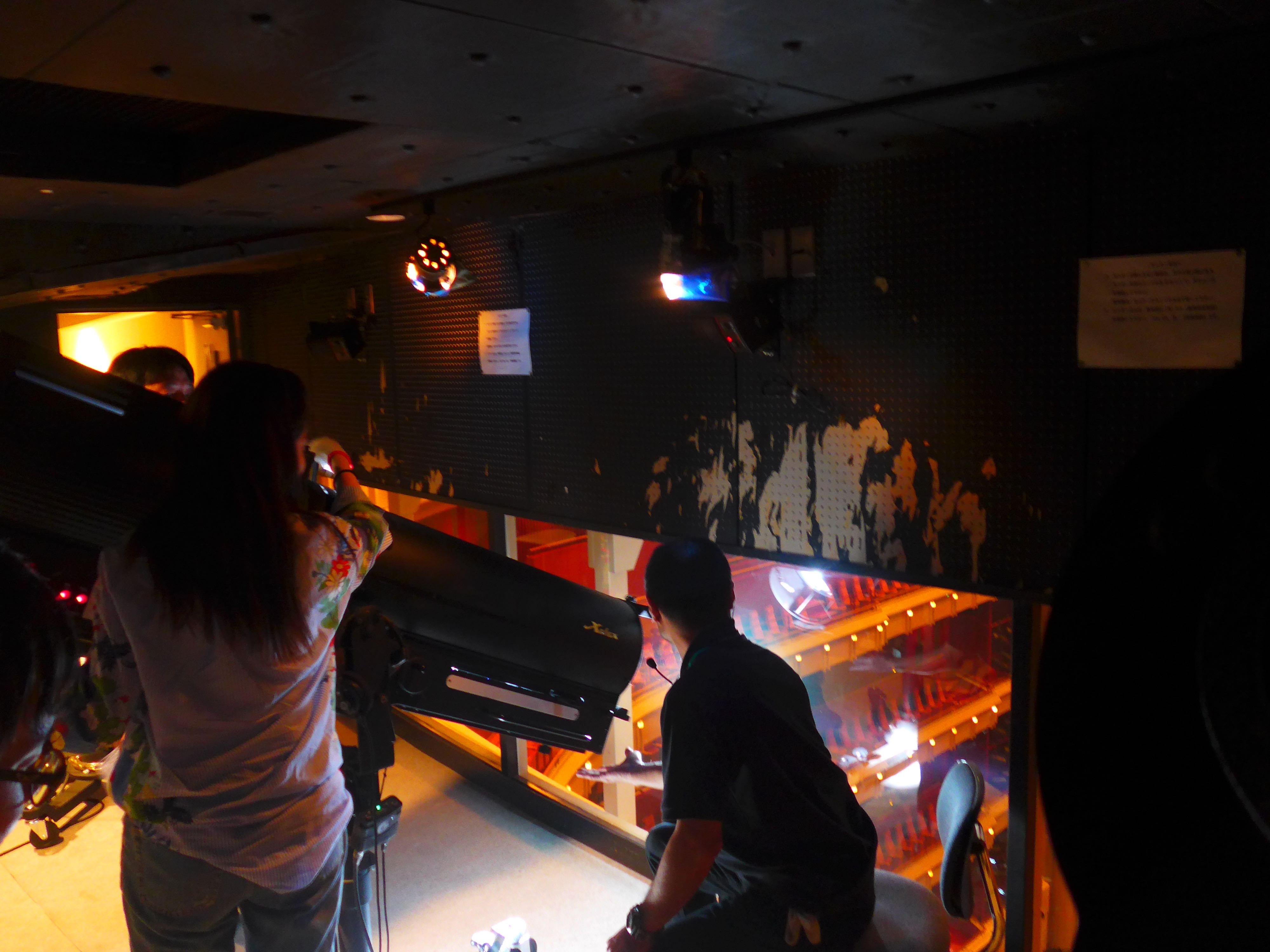 Next, go through the maze-like behind-the-scenes to the pin spot room.
Now it's our turn to follow the members of the other team in the spotlight. Let's try by having each person teach you how to operate! 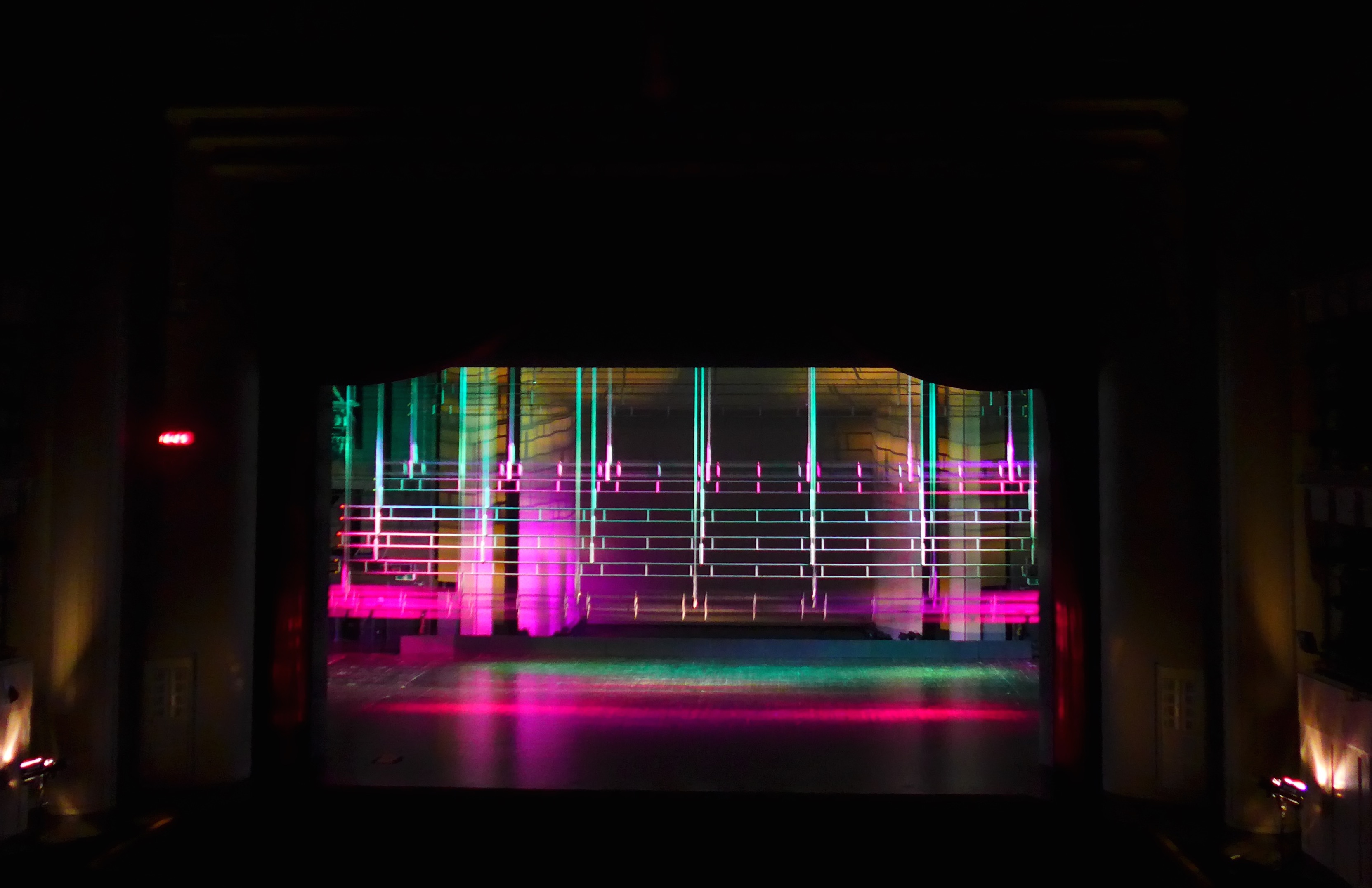 Next, we all sat down in the audience and watched a demonstration of the stage mechanism.
What appears on the stage are colorful dances of light and tools such as art batons, curtains, and pianos. How dramatic they are, even though they just shimmer and dance to the music! 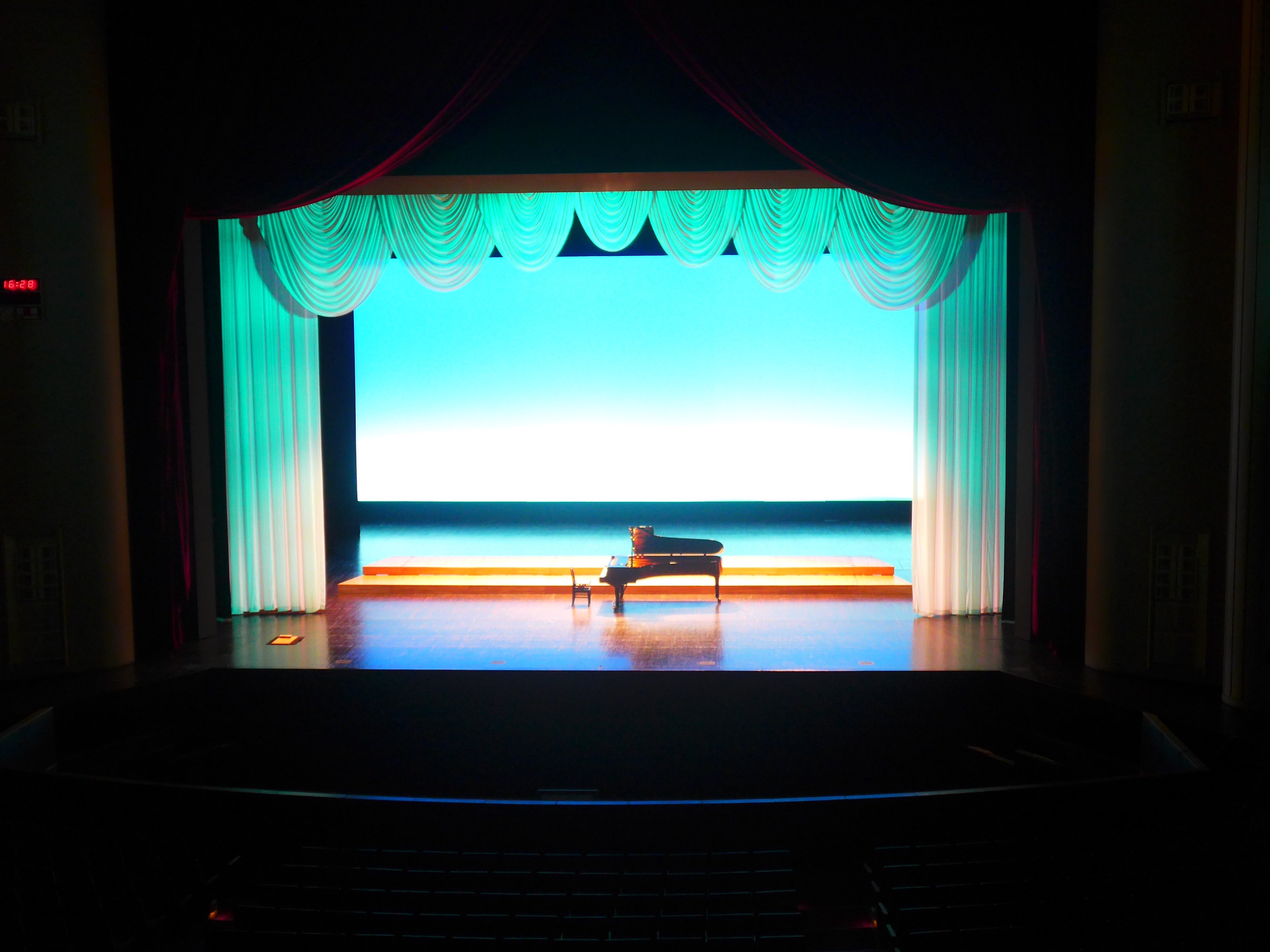 Even though he creates such a variety of scenes, it is said that only a small part of them are used from the perspective of the entire stage mechanism of the large theater. How much potential do you have? Amazing! Yokosuka Arts Theater! 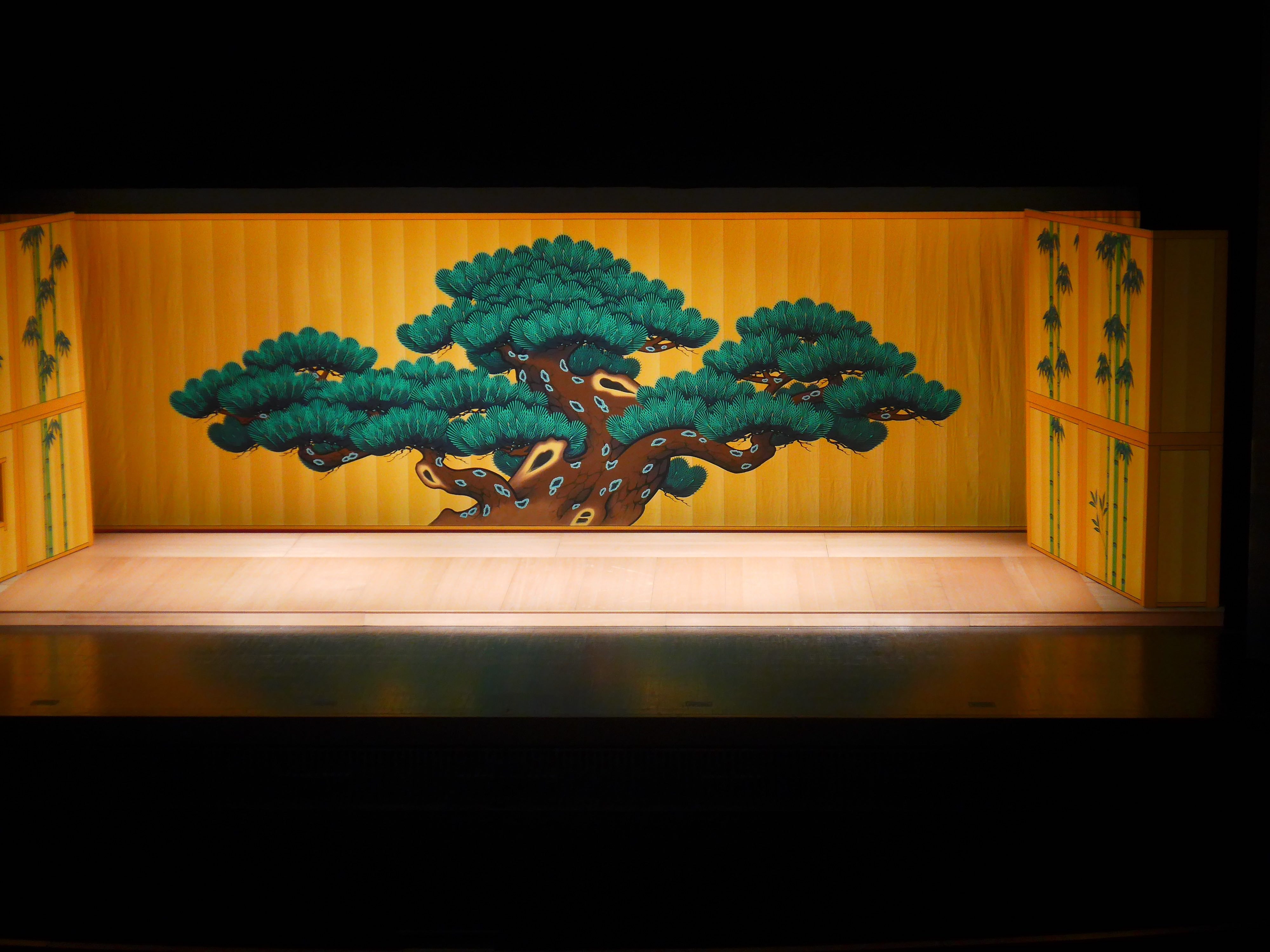 I felt the skillful skills of the staff who support the stage and the deep love for the stage in the wonderful demonstration that deserves to be called "showtime".
Then, "I want to come to a concert this summer" and "I want to see the stage of traditional performing arts," the idea swelled in my head. 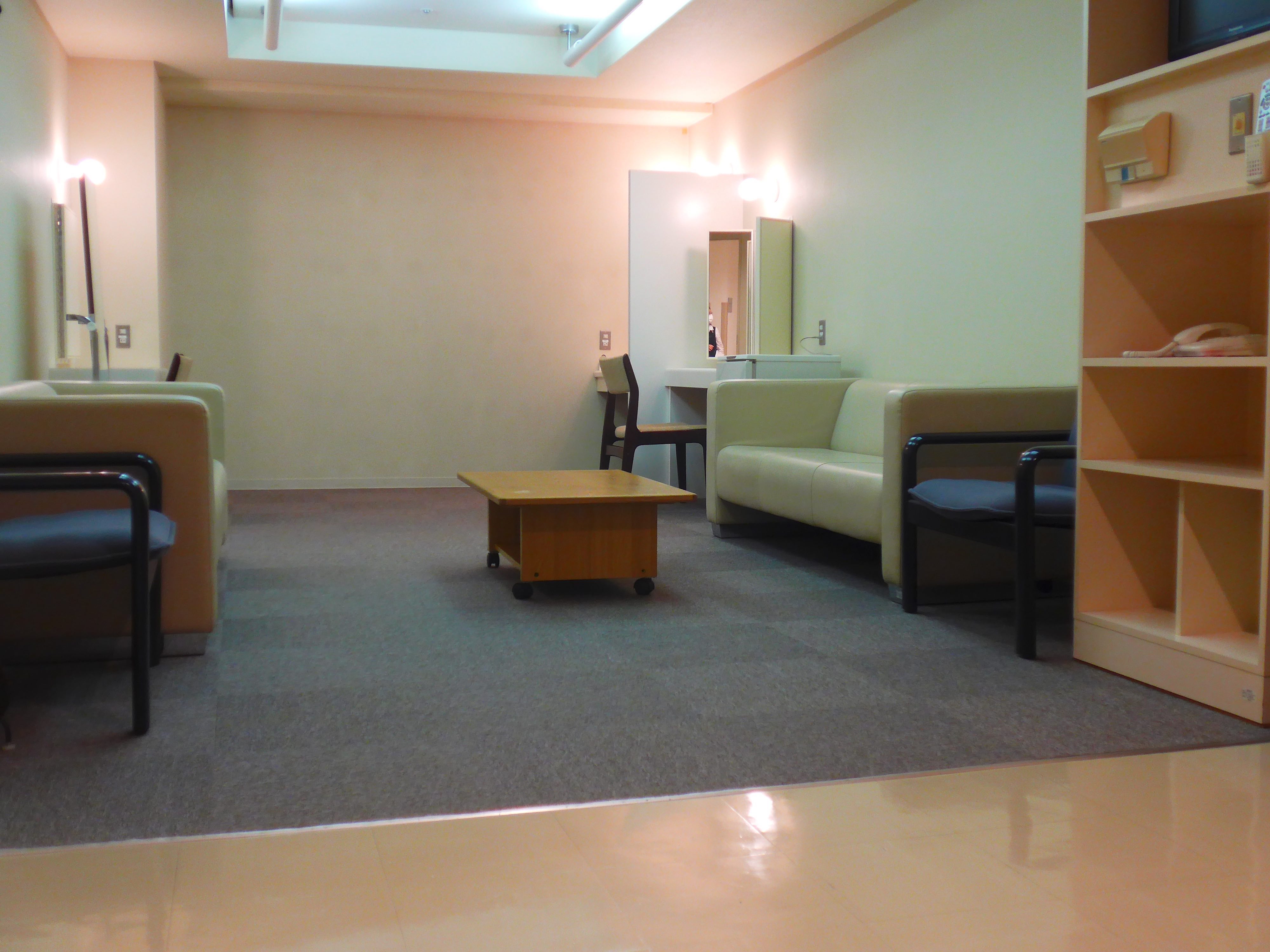 And personally, I was very interested in the dressing room tour.
There are large rooms that can be used by 10 or more people, medium-sized private rooms that are used by leading actors with their managers, and small private rooms that Maestro prefers to improve their concentration. As expected, there are only theaters with opera house specifications, and there are various dressing rooms.
I wondered if Seiji Ozawa also sat on this sofa ... and the delusion spreads on his own. 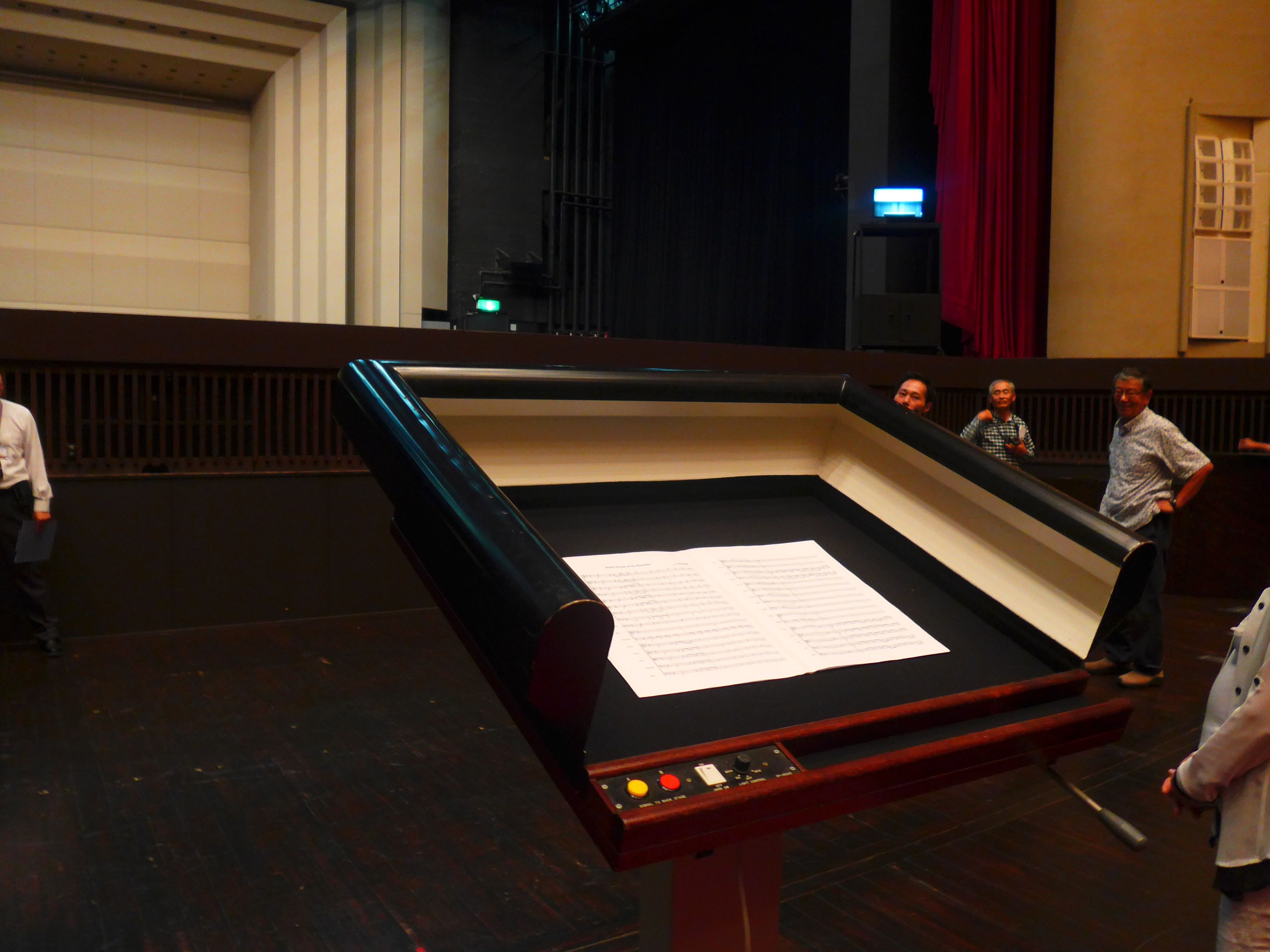 And finally, to the orchestra pit in front of the stage. It is a space for orchestras to create dreamlike music when performing operas and ballet.
Maestro of the world stood on this podium and was praised by the audience ... again, a delusion.

When I closed my eyes, I felt that the tuning of the orchestra and the noise of the audience at the beginning of the tour were faintly heard.

Backstage tours of Yokosuka Arts Theater are held irregularly. The schedule will be announced on the website, so be sure to check it out.
Check the official website for details and application!