A colorful and cute picture in the flyer that I suddenly saw. On a light blue background, sea creatures are drawn around the mysterious woman. "Hmm? I observed it during my free summer vacation," the memories of a long time ago suddenly revived, and I was attracted to the painting, which seemed to be a modern version of Sea Monkey, and I wanted to see the real thing. .. The venue is GALLERY COOCA in Hiratsuka, which I peek at for the first time. 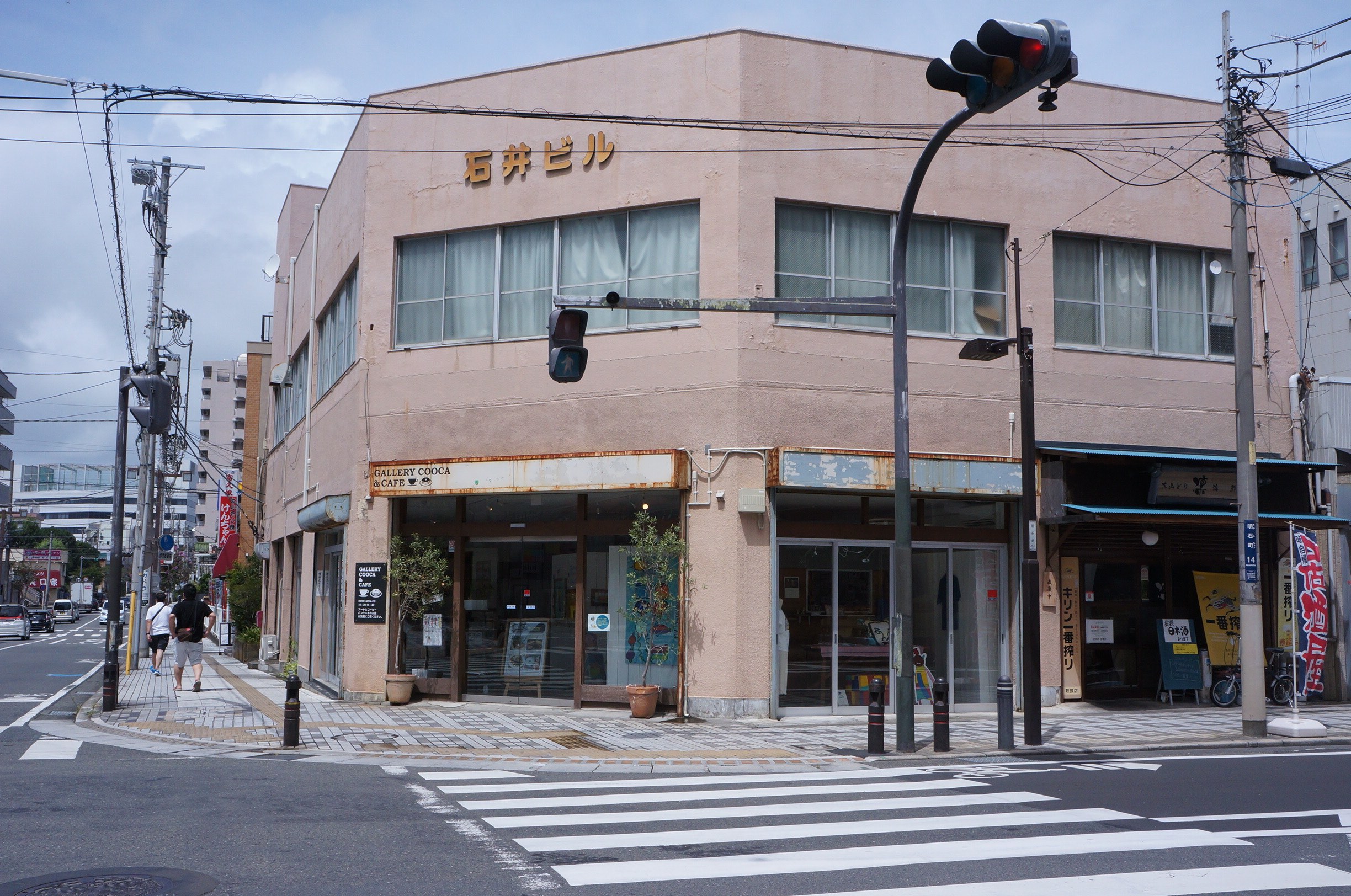 After passing through the shopping street at the west exit of Hiratsuka Station, what! What! A building that looks like a movie set at a wide intersection. "Cool!" The destination was here, which came out of my mouth. 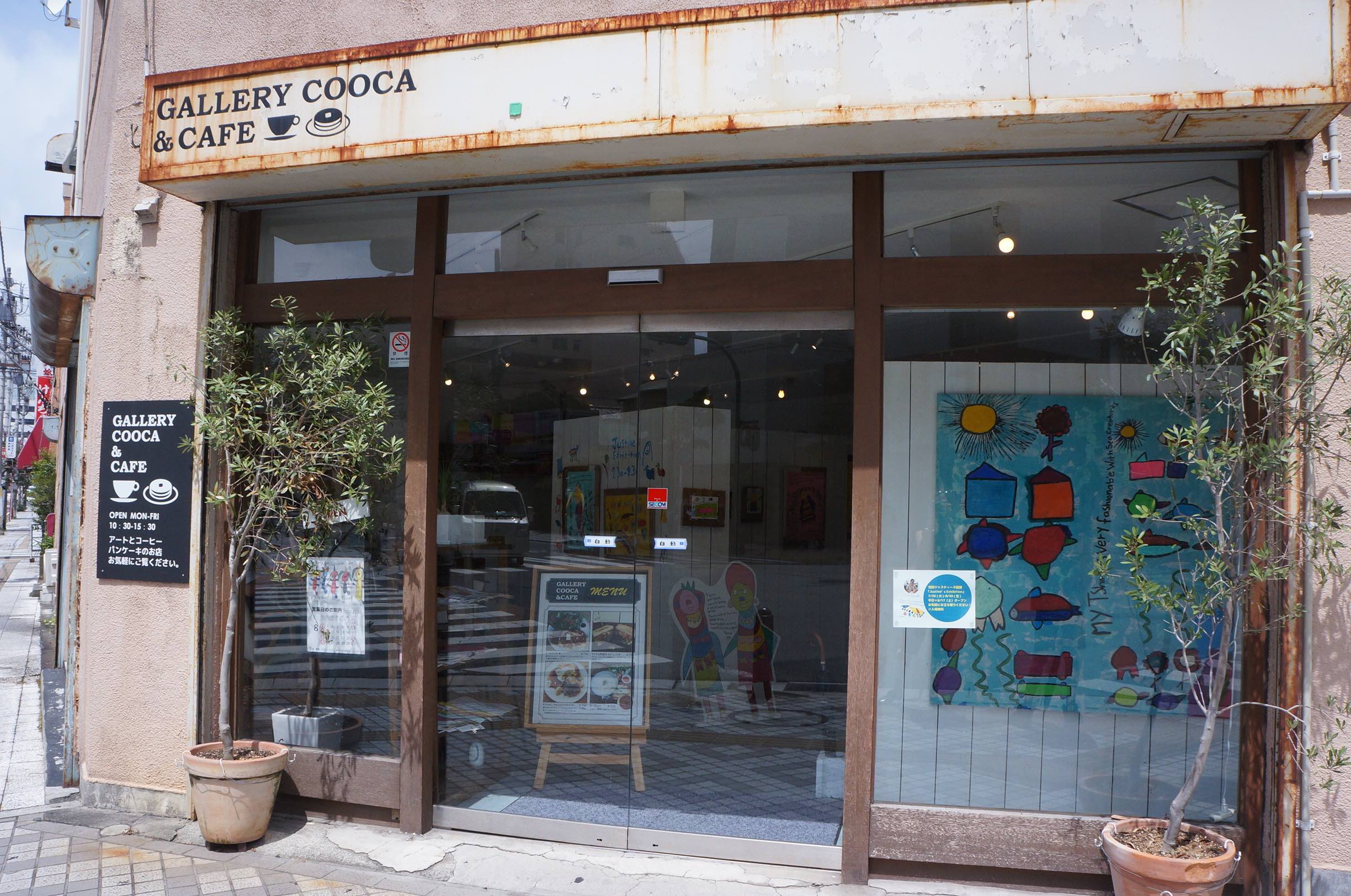 When you enter the retro entrance, you will find a rustic modern fashionable cafe. The back is a counter.
And the other side of the white panel is the gallery space. There were light pictures that drew me here. 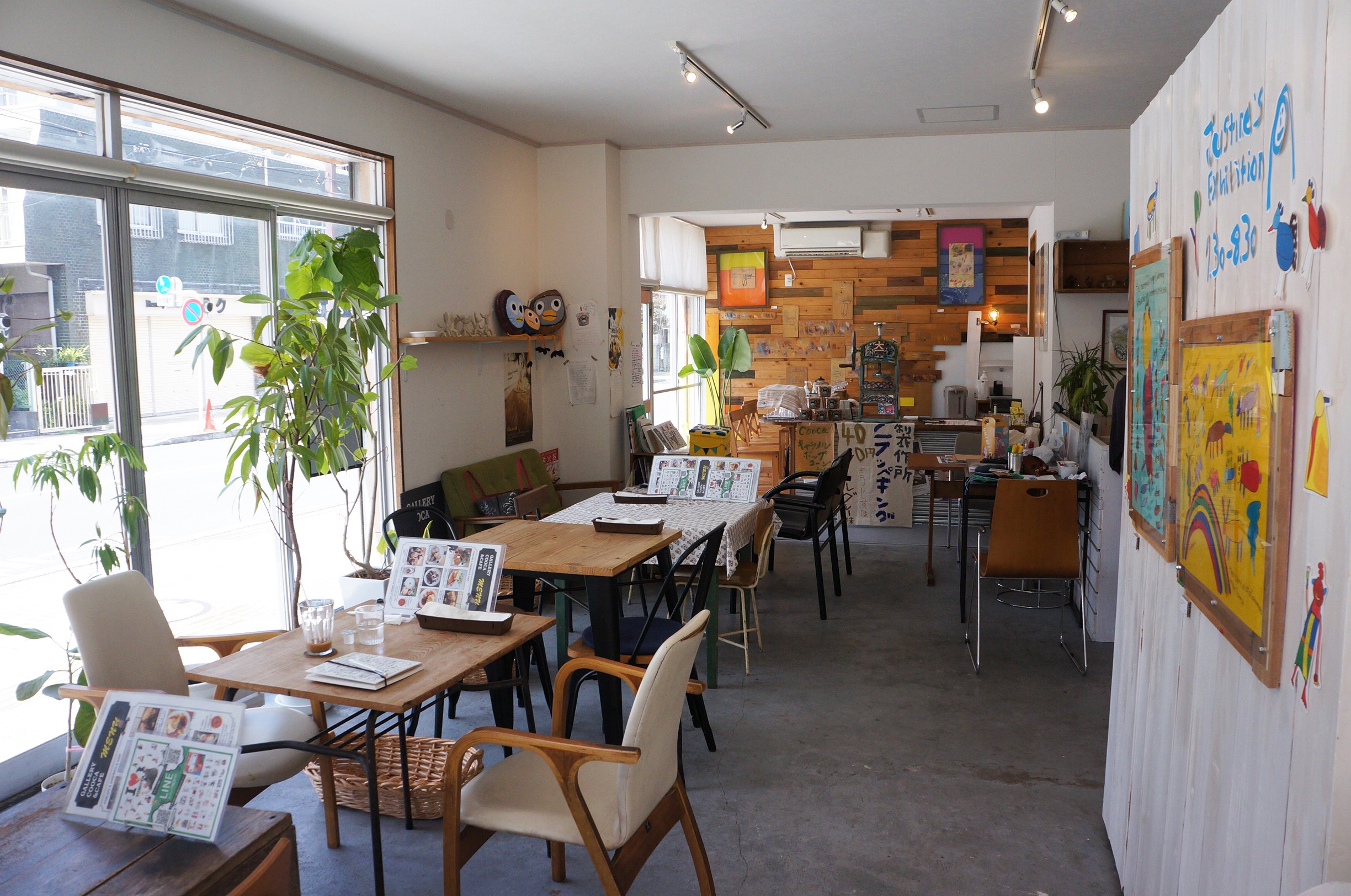 Justine's cute paintings, which capture the hearts of a wide range of ages, are said to have been incorporated into corporate designs such as cosmetic packages and T-shirts. 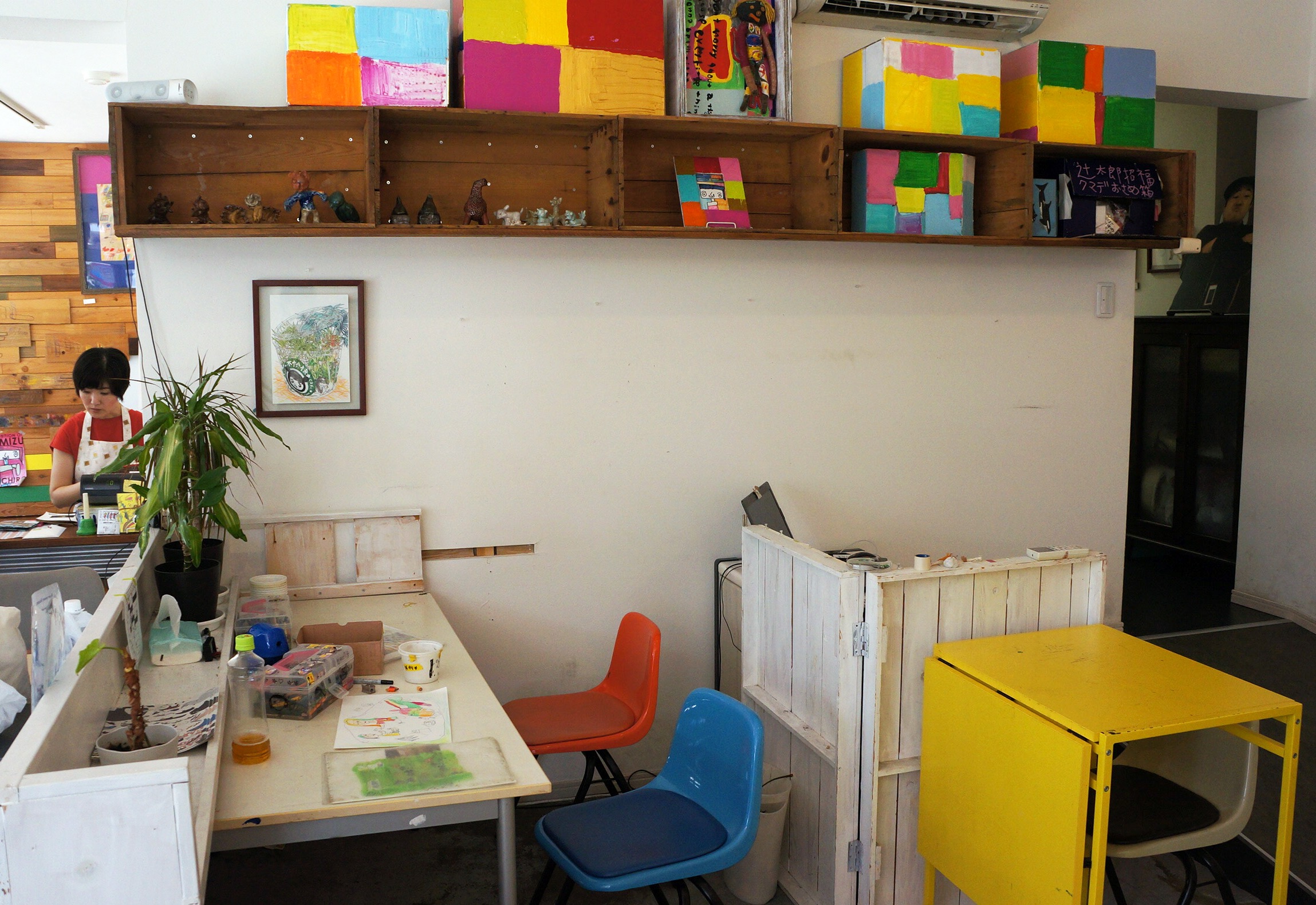 By the way, in one corner of the gallery, there is a corner where artists can work, and drawing paper and paints are still spread out today. 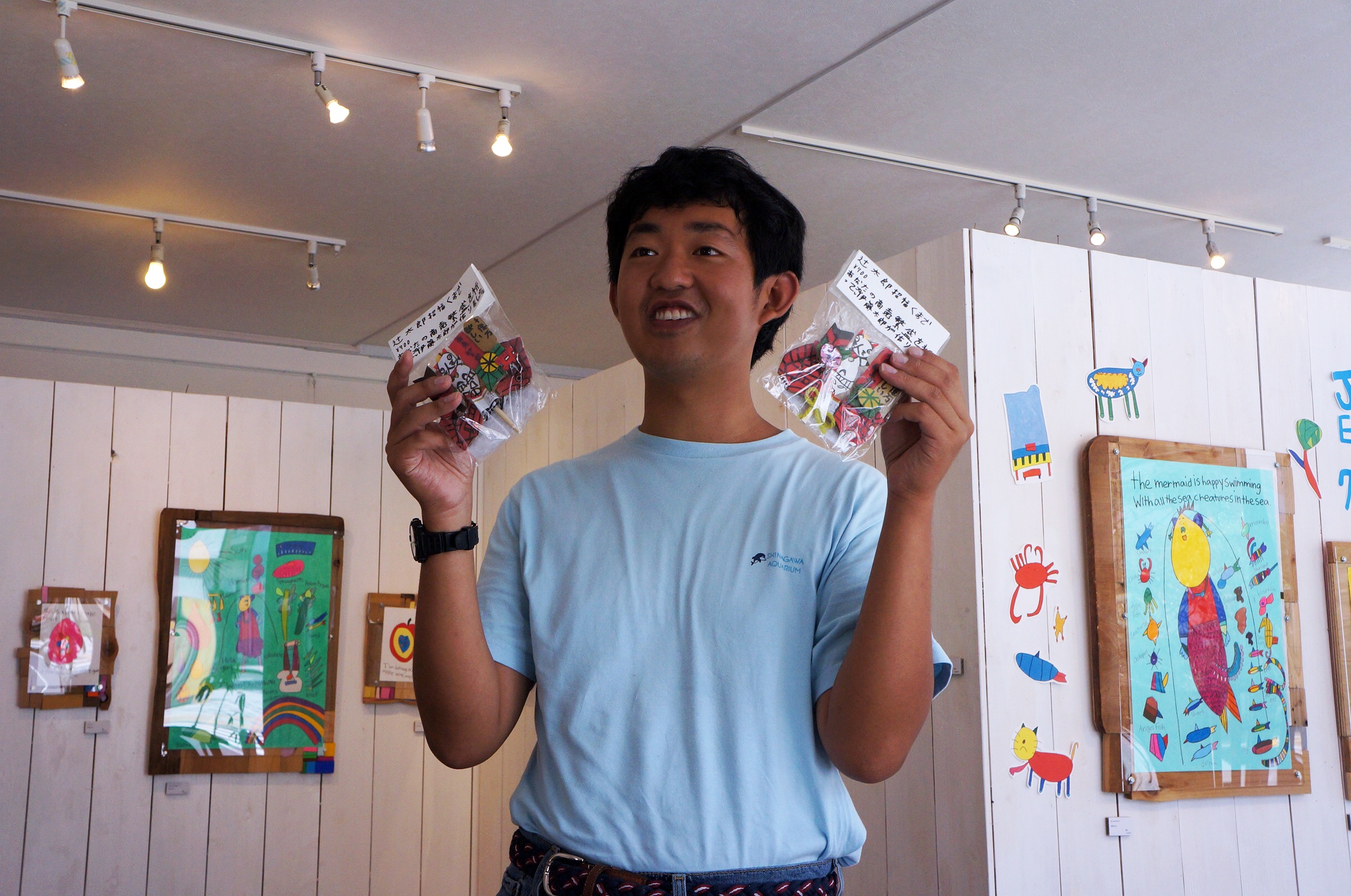 Suddenly, a man appeared, "I'm sorry!", And "I'm going to explain" Taro Tsuji's Blessing Kumade "from now on," and fluent oral sales began. Speaking at speed without stumbling ends with a powerful word, "Your wish will definitely come true!", And I almost feel like saying "Yes! Please!" (Laughs).
He is Taro Tsuji, also known as Taro Tsuji. After all it is one of the artists of Kuka. Taro Tsuji is good at memorizing and making many of the same things. 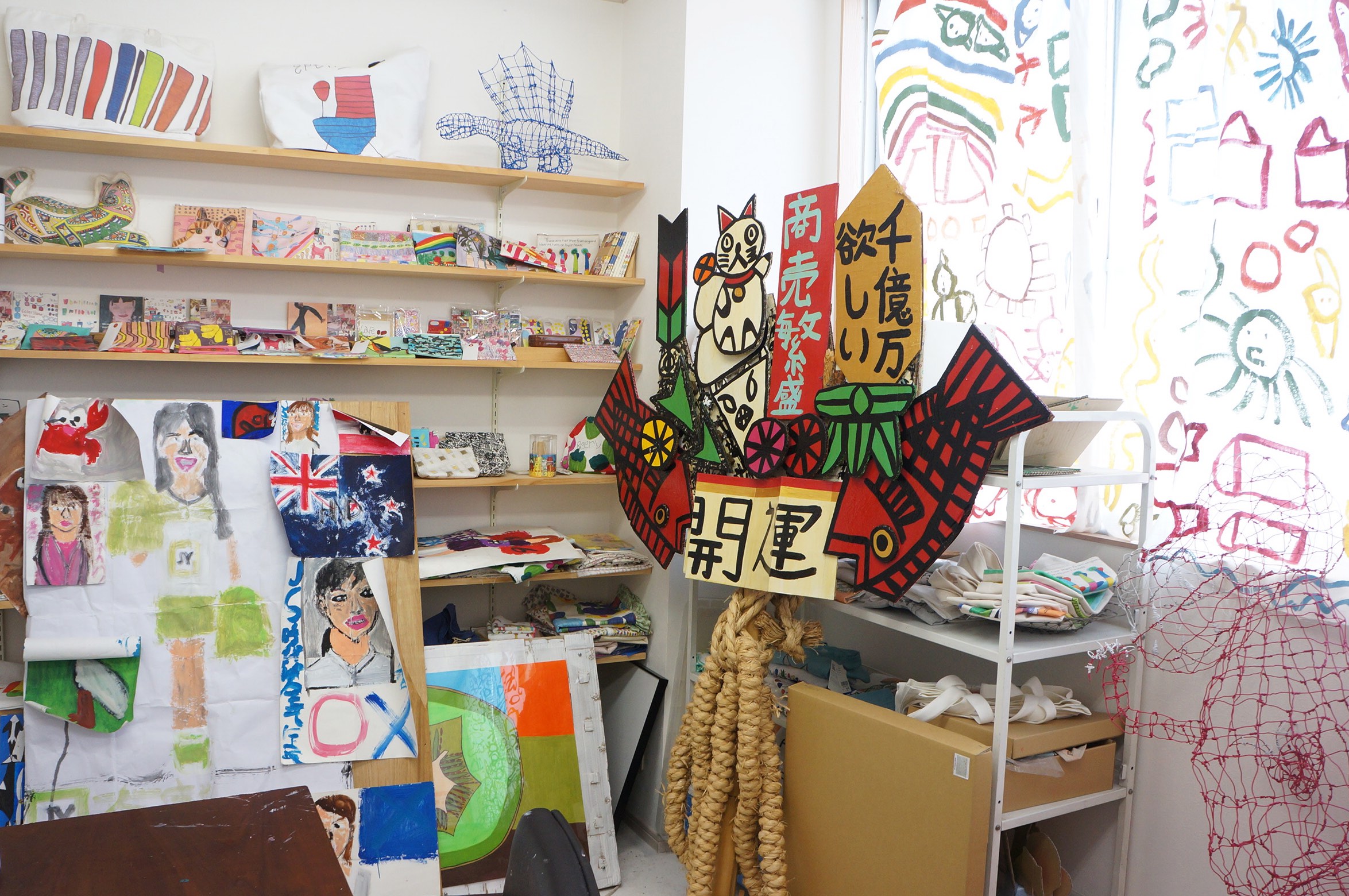 There is also such a big version of Kumade. It's a big deal because a certain IT company says that there will be an order at the end of the year. 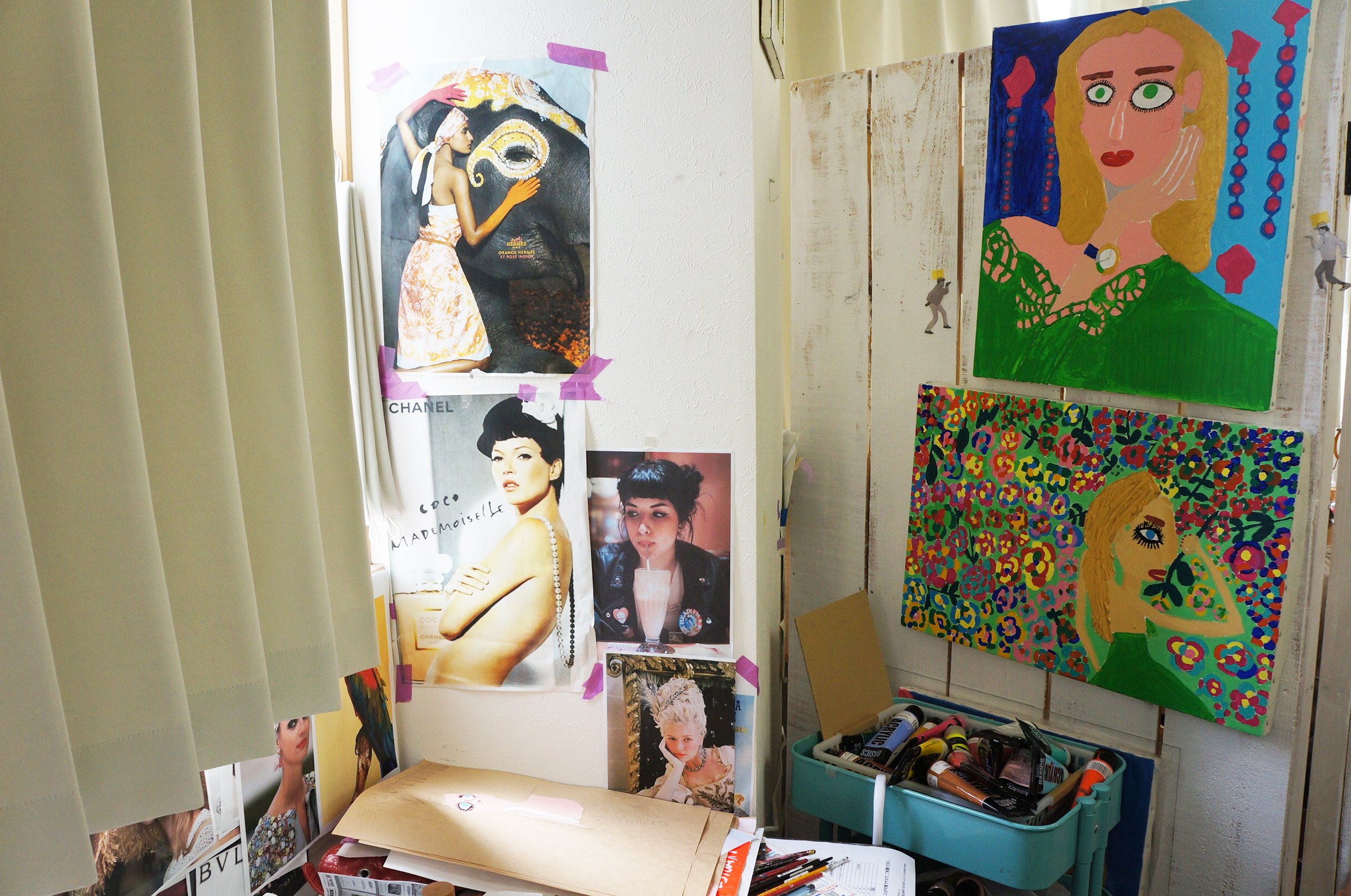 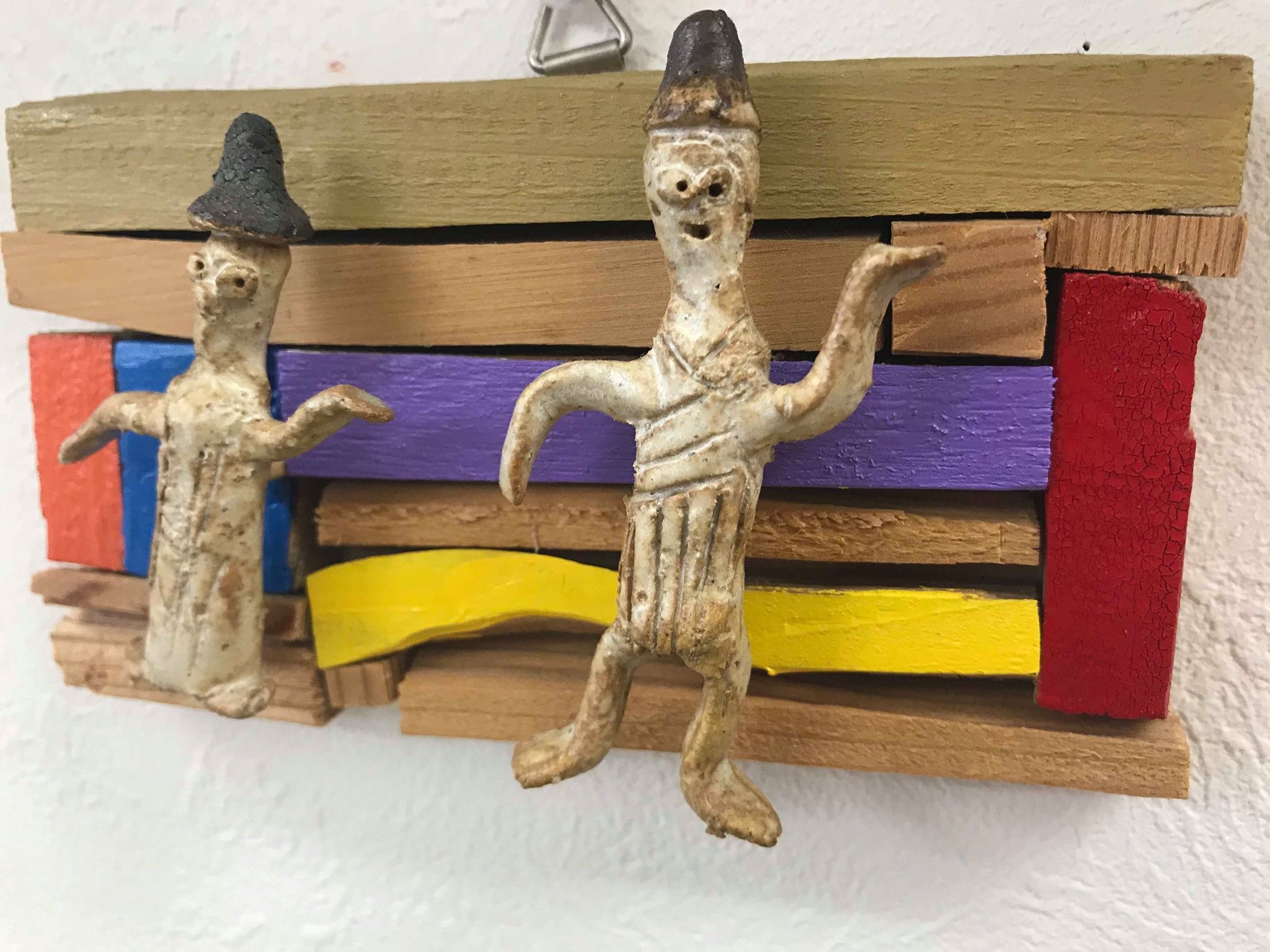 There are many other unique artists such as those who put a pinup of models and actresses on the wall of the desk and create a lot of beautiful people, those who make a weak mood full of loose mood, those who are good at performance, etc. It is said that it belongs to.

“Kuka is an atelier for people with handicap,” says Kitazawa.
"Here, we aim to be able to work and play an active role by doing what the person wants to do and what he is good at." 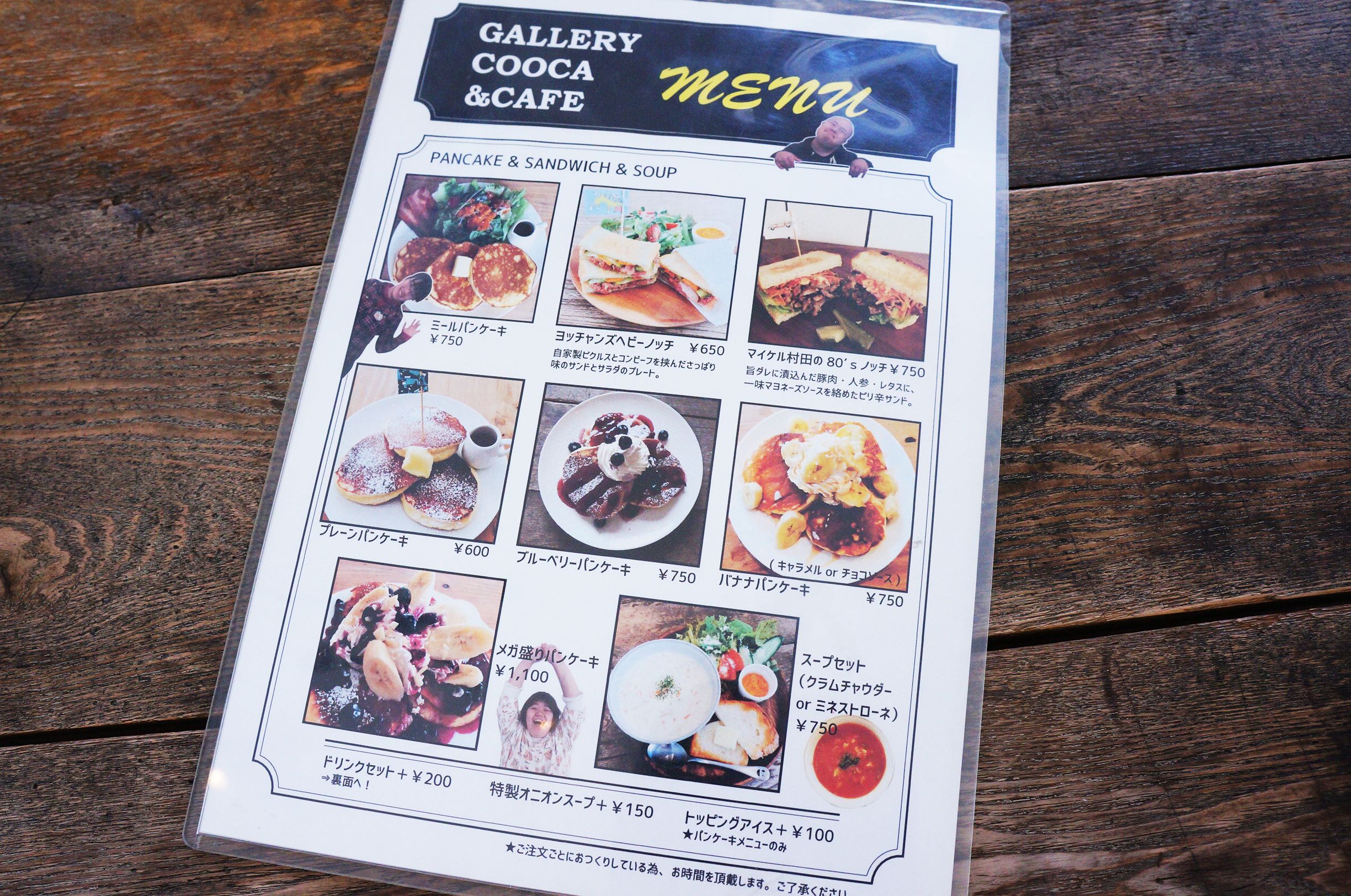 People who are good at cooking are active in cafes. "At first, it was only sandwiches, but there are individual differences in how to apply the sauce. I realized that it would be difficult for everyone to unify, so I added pancakes that are easy to make with the same grams to the menu."
The sandwich has a little flag of the Kuka artist's picture, which is also fashionable. 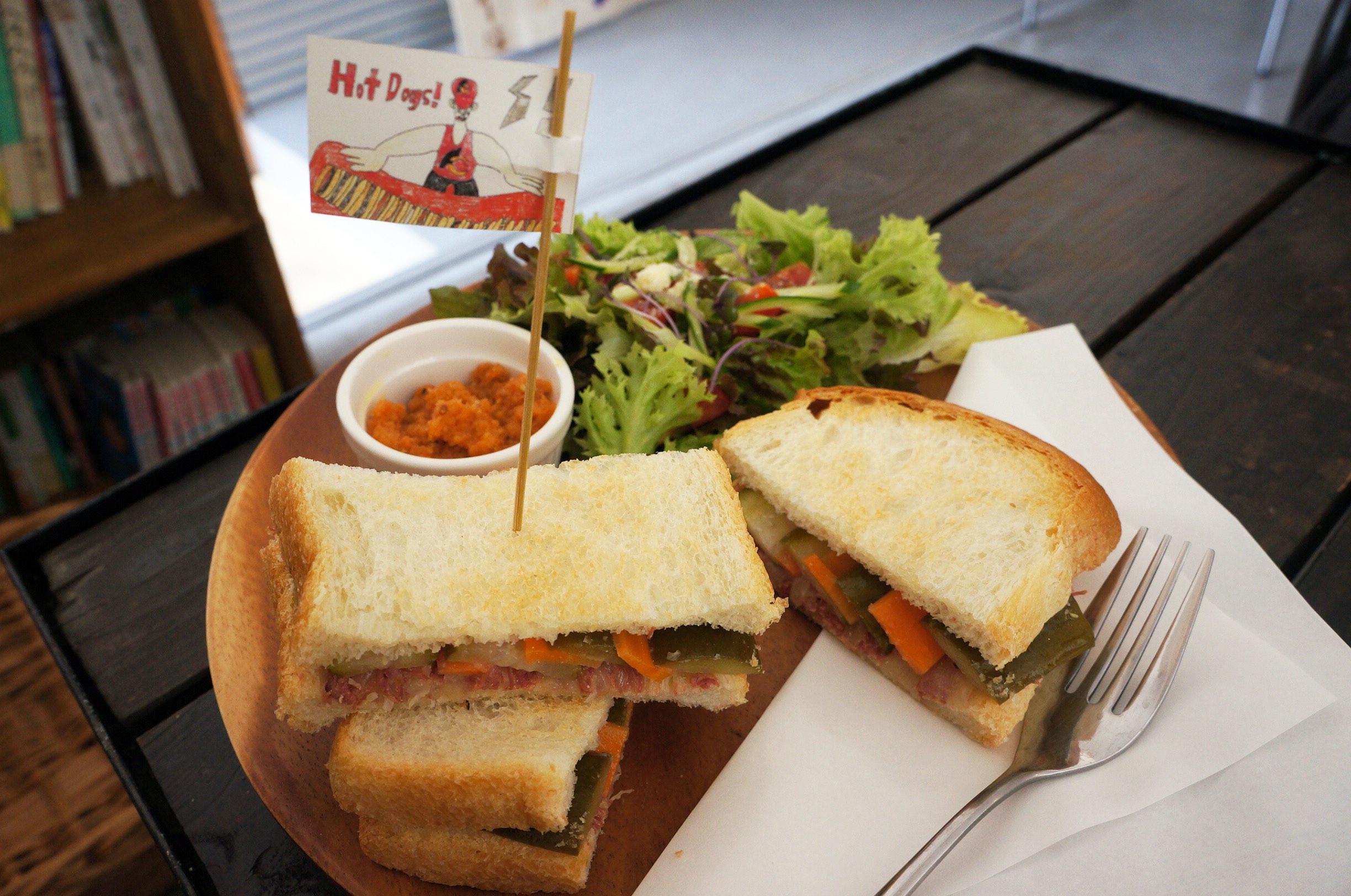 If you watch the office workers and neighbors come in casually, you can see that they are familiar with the city.
I thought that it was because of the design power that the staff of Kuka put out, but I see that many of the staff, including Mr. Kitazawa, are from art schools and design fields. 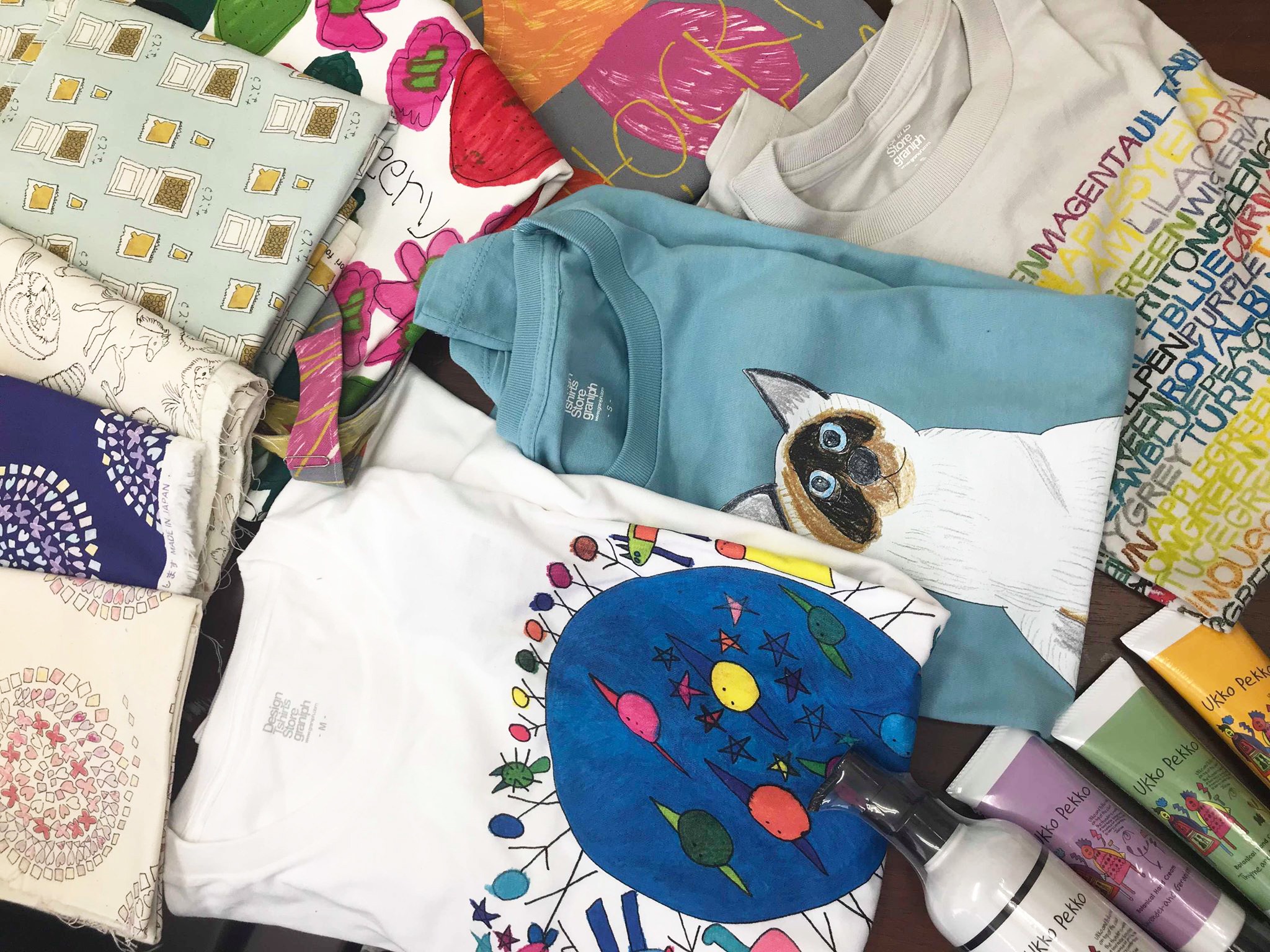 Mr. Kitazawa and other Kuka staff are thinking about the exit part such as design licenses, puppet shows, live business trip performances, etc., and it seems that there are more places to connect with society. 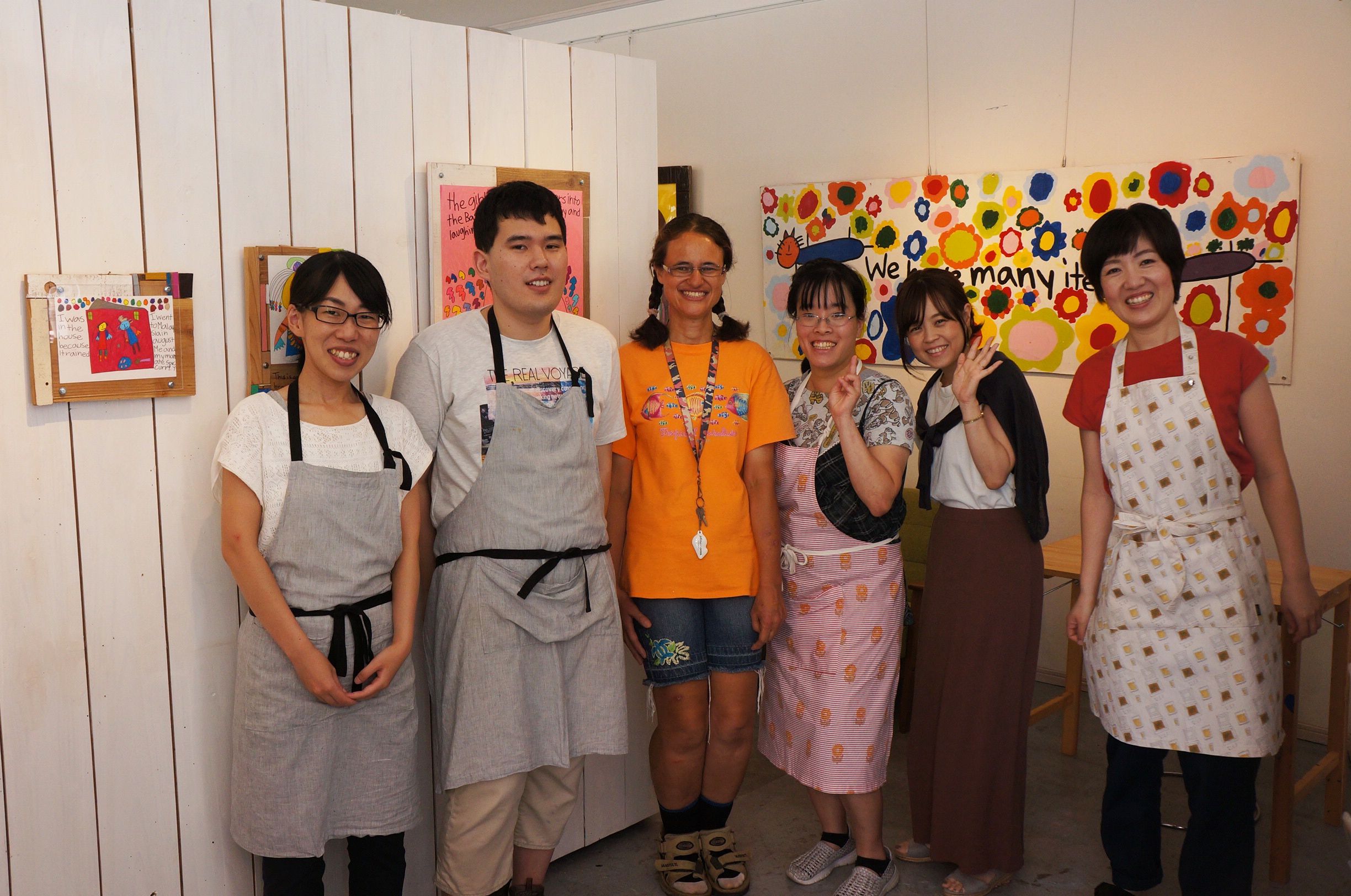 * Justine in the middle, Kitazawa second from the right

“Our staff at Kuka is good at finding and drawing out interesting and wonderful personalities that people around us haven't paid attention to,” says Kitazawa.

As with anyone with or without a handicap, paying attention to your personality leads to self-affirmation. Sayaka Yokomizo, who was not good at communicating with others, won the highest award at the handmade picture book competition sponsored by Zushi City in 2007. From there, his heart was opened little by little, and in 2017 he was appointed by the Ministry of Education, Culture, Sports, Science and Technology as a "special support ambassador for promoting lifelong education for persons with disabilities."
There are so many characters in Yokomizo's work that you can understand that "one person is good at picture-story shows that use different voices for many roles"! Don't miss it. 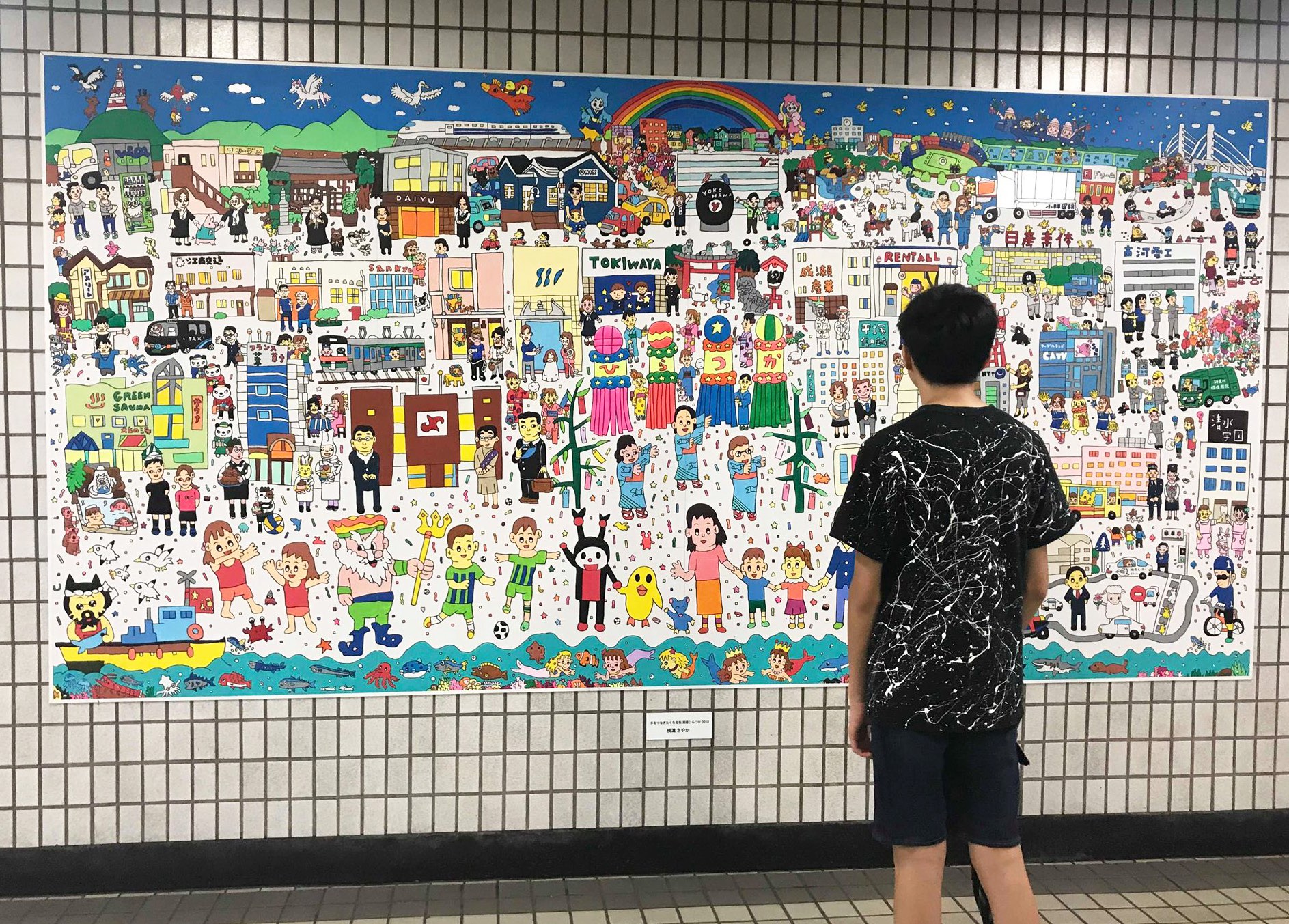 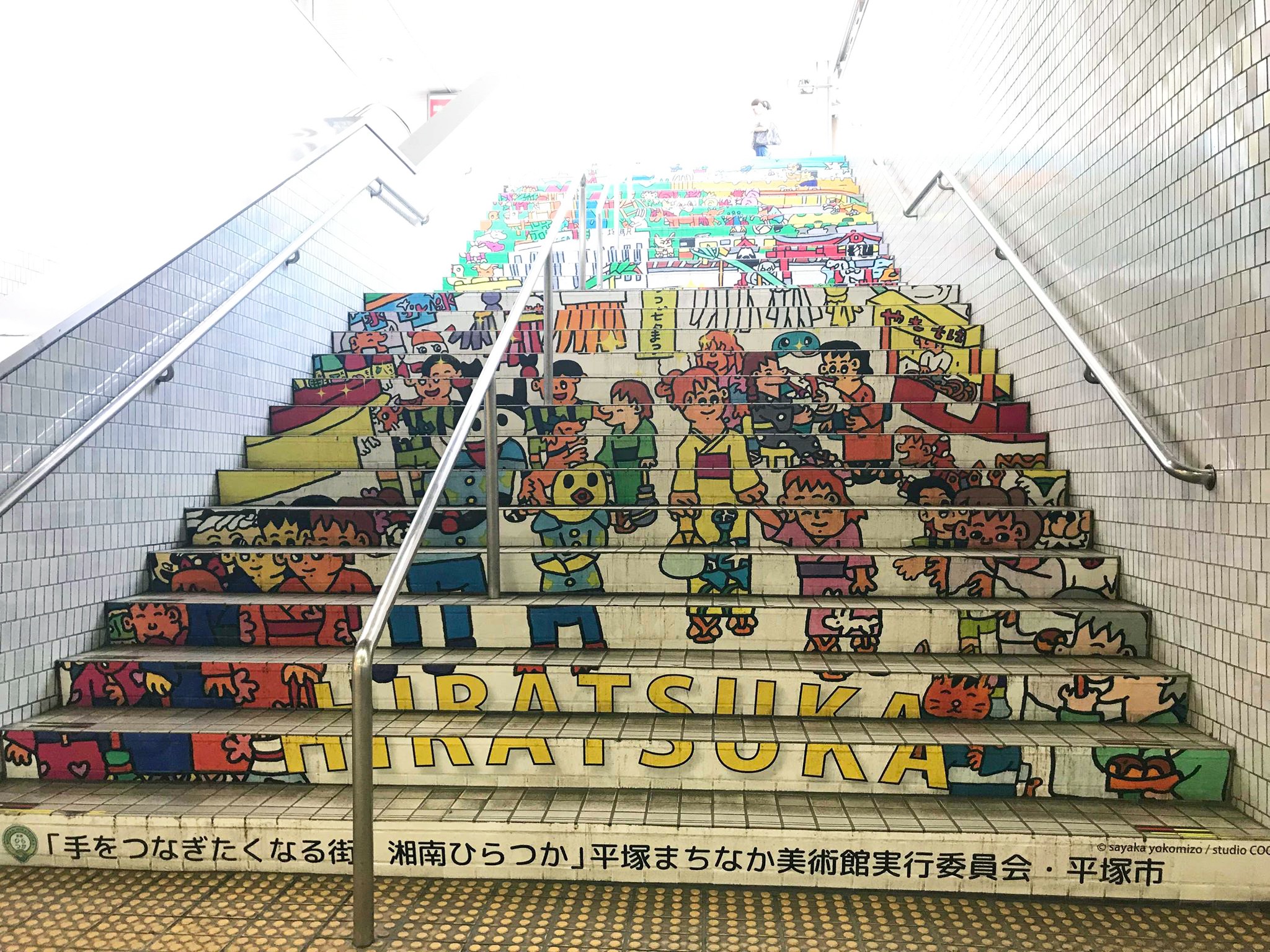 Its predecessor is a welfare facility established in 1992. The gallery department, which was in it, became independent in 2009, and Gallery Kuka was born. Mr. Kitazawa and his colleagues continue to send out the works of all about 100 people who are currently attending the kindergarten so that they can connect with society and enrich their lives, people and art relationships beyond people with disabilities. increase. 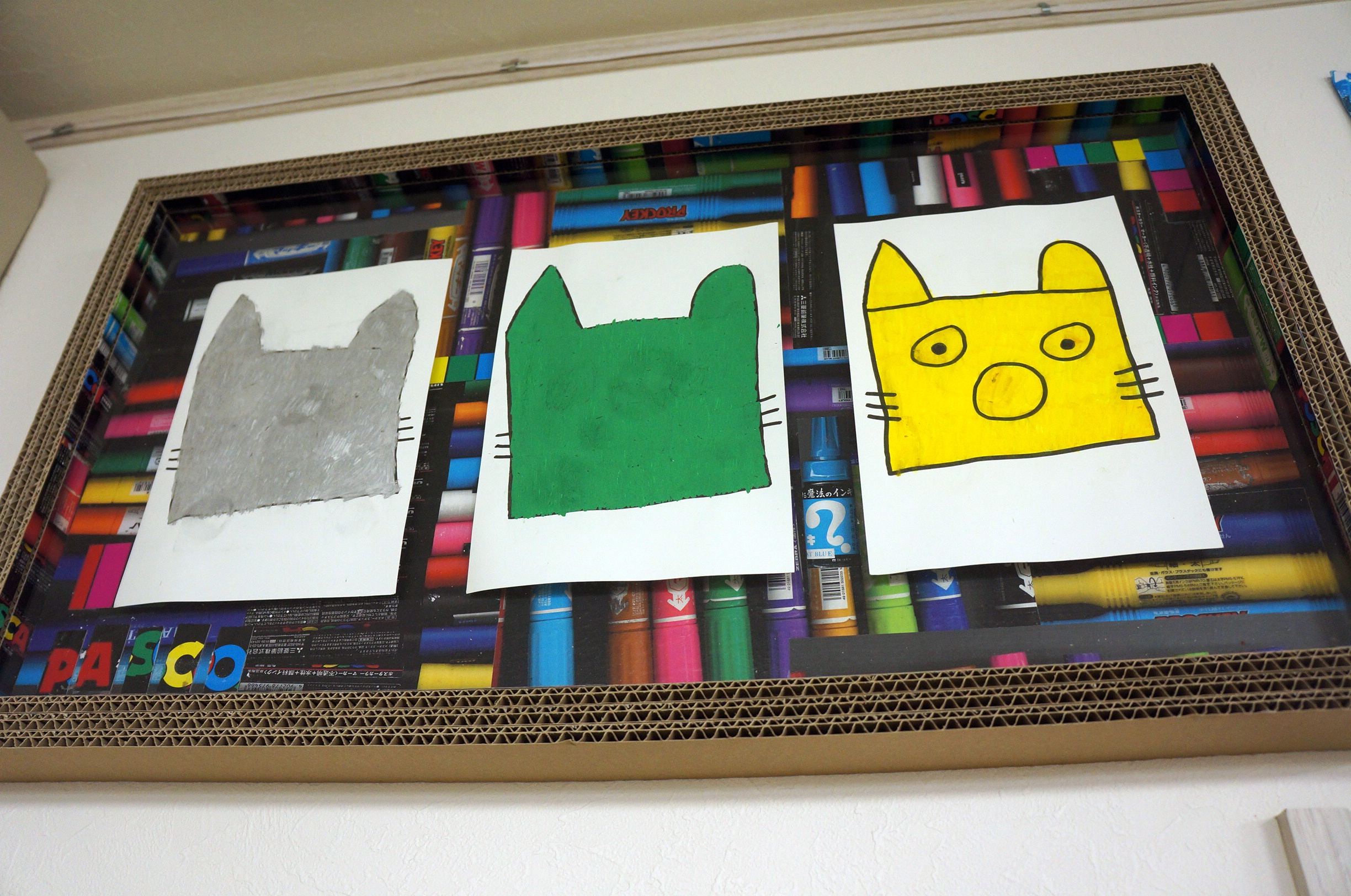 I was in Kuka and wondered why it felt so good.
The expressions are straightforward, and each individuality oozes out. The persuasive power of plain expressiveness . There is no theory there, and there is no need. I enjoyed the impact of seeing the power of art. 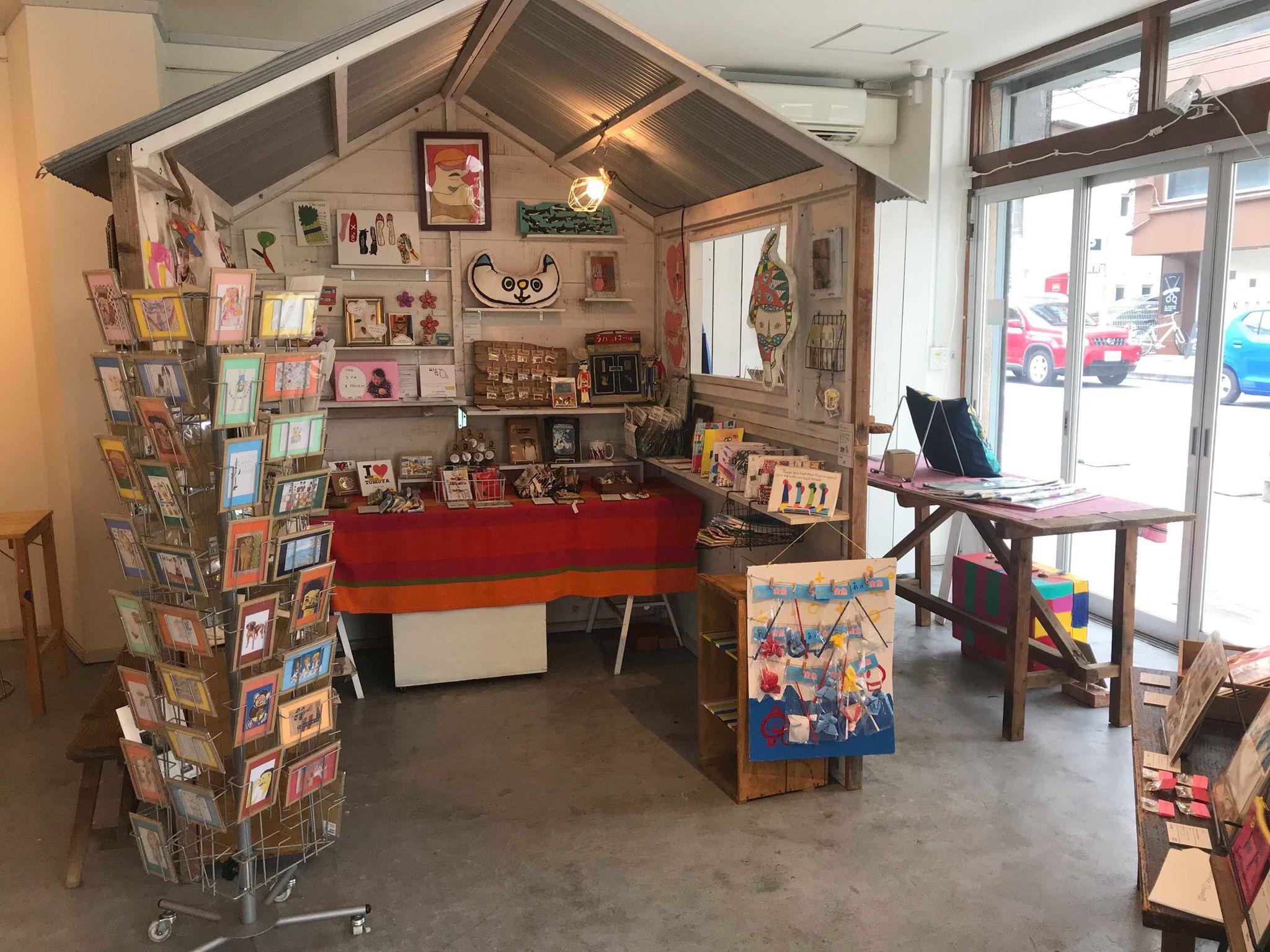 In the hut in the gallery, original goods of the artists belonging to the gallery are sold in various genres such as pictures, words, music, and consultation on worries. There is no doubt that the expression that invites a laugh somewhere will be appreciated as a souvenir!

A special exhibition will be held on the 1st of the month, and Justine will be holding it until August 30th. By the way, the Sea Monkey-like character that I first thought was a girl was "Mermaid," according to Justine. That wasn't a mistake! Yey !! (laughs)

"access"
▶ ︎ About 10 minutes on foot from JR Hiratsuka Station