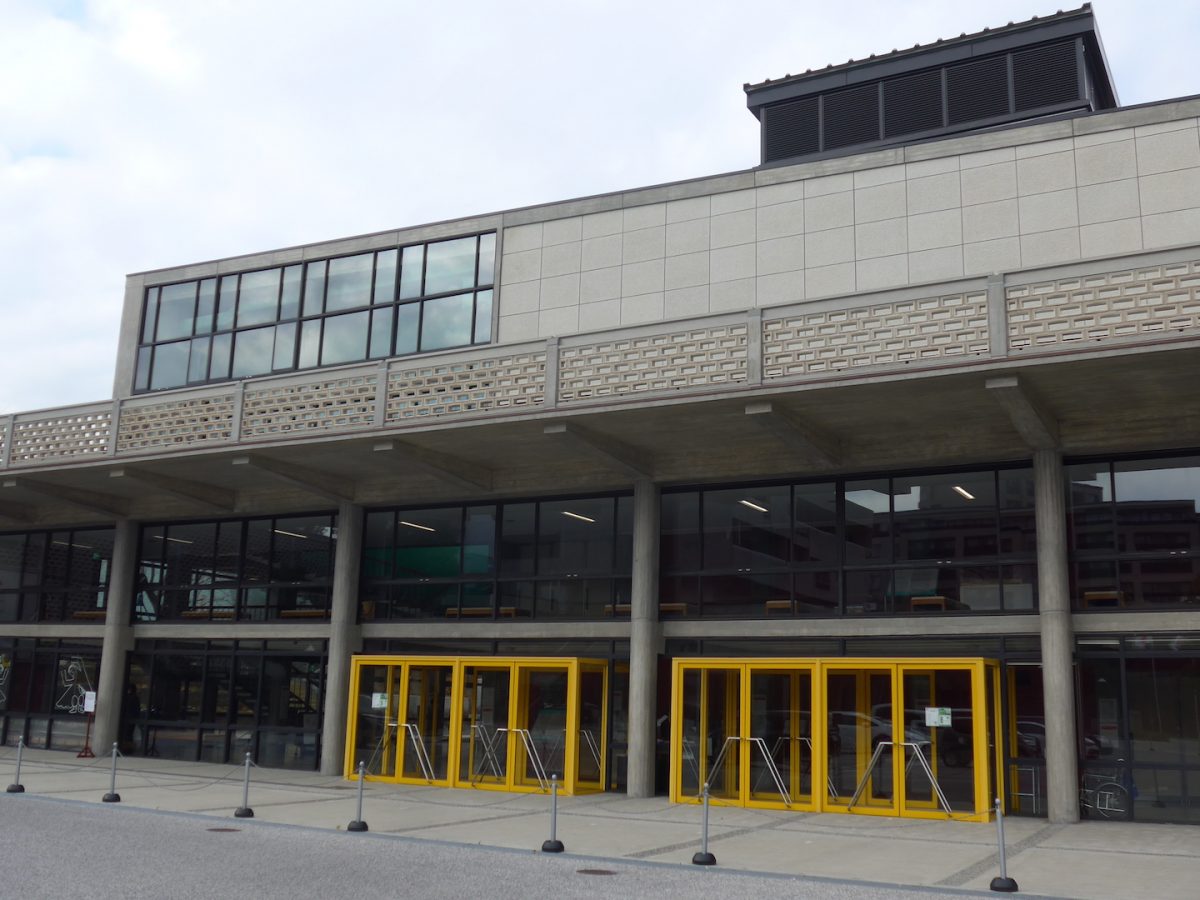 Let's play music and art in a stylish space unique to Maekawa architecture!

Kanagawa Prefectural Music Hall
(Please note that this page was created using Google's automatic translation service and understand that because of this, its translation may not necessarily be accurate.)

The "Concert Hall Open Theater" is a place where you can fully open the music hall and enjoy it for free. Not only music fans, but also people who are more interested in Maekawa architecture than music and preschool children can easily participate in this project. It seems that both the "real version" and the "online version" will be held this time in response to the corona disaster, so first go to the real version of the open theater held on January 6th (Wednesday)! 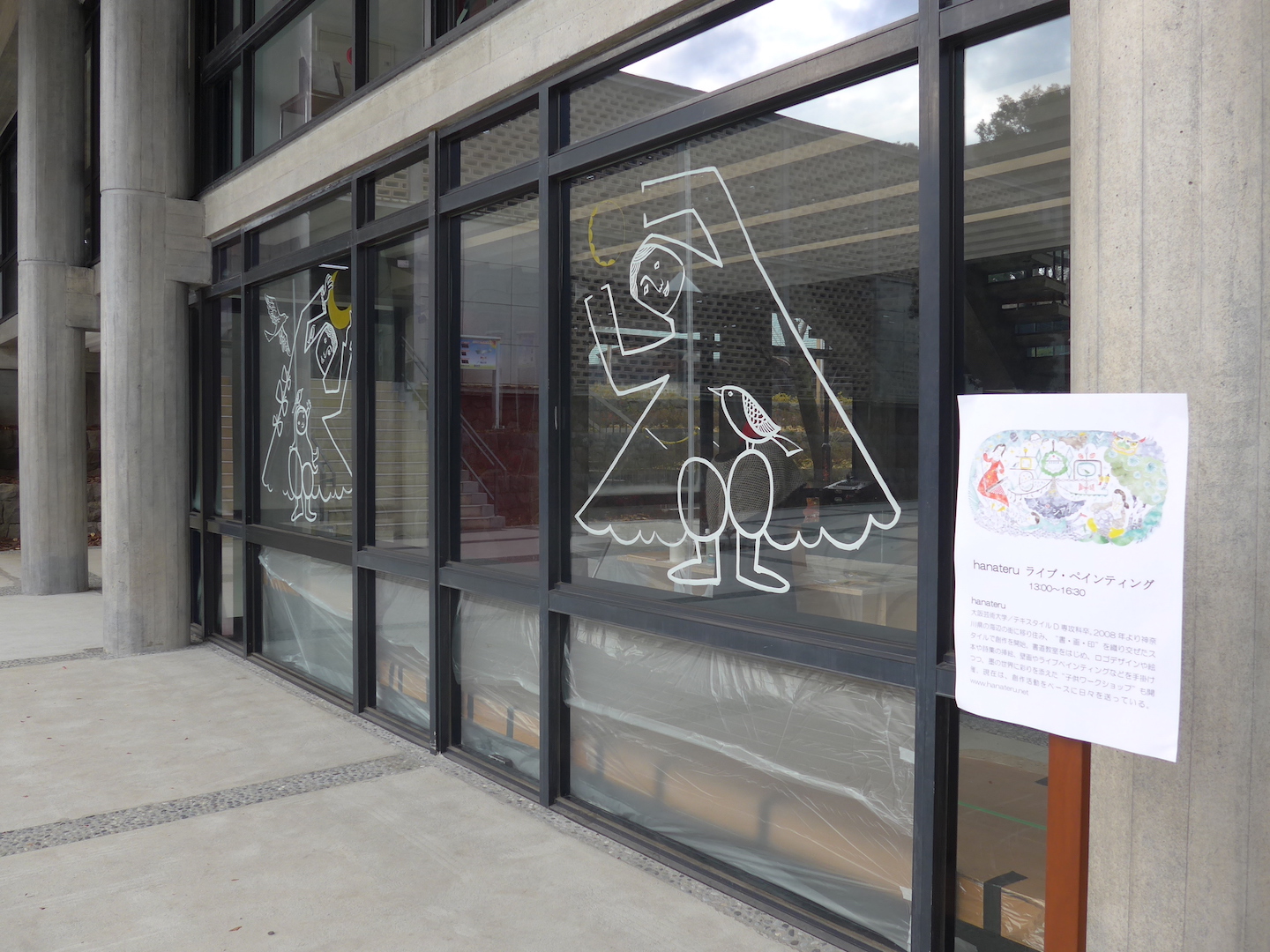 Unfortunately, the planned "Maekawa Architecture Tour" has been canceled for both the adult version and the children's version. For this reason, the area around the entrance is quiet even after 1:00 pm, which is the opening time. Somehow a joyful air is transmitted from the other side of the glass wall. By the way, was there a program called "live painting"? I thought that this should be a live performance, so let's go inside the concert hall! 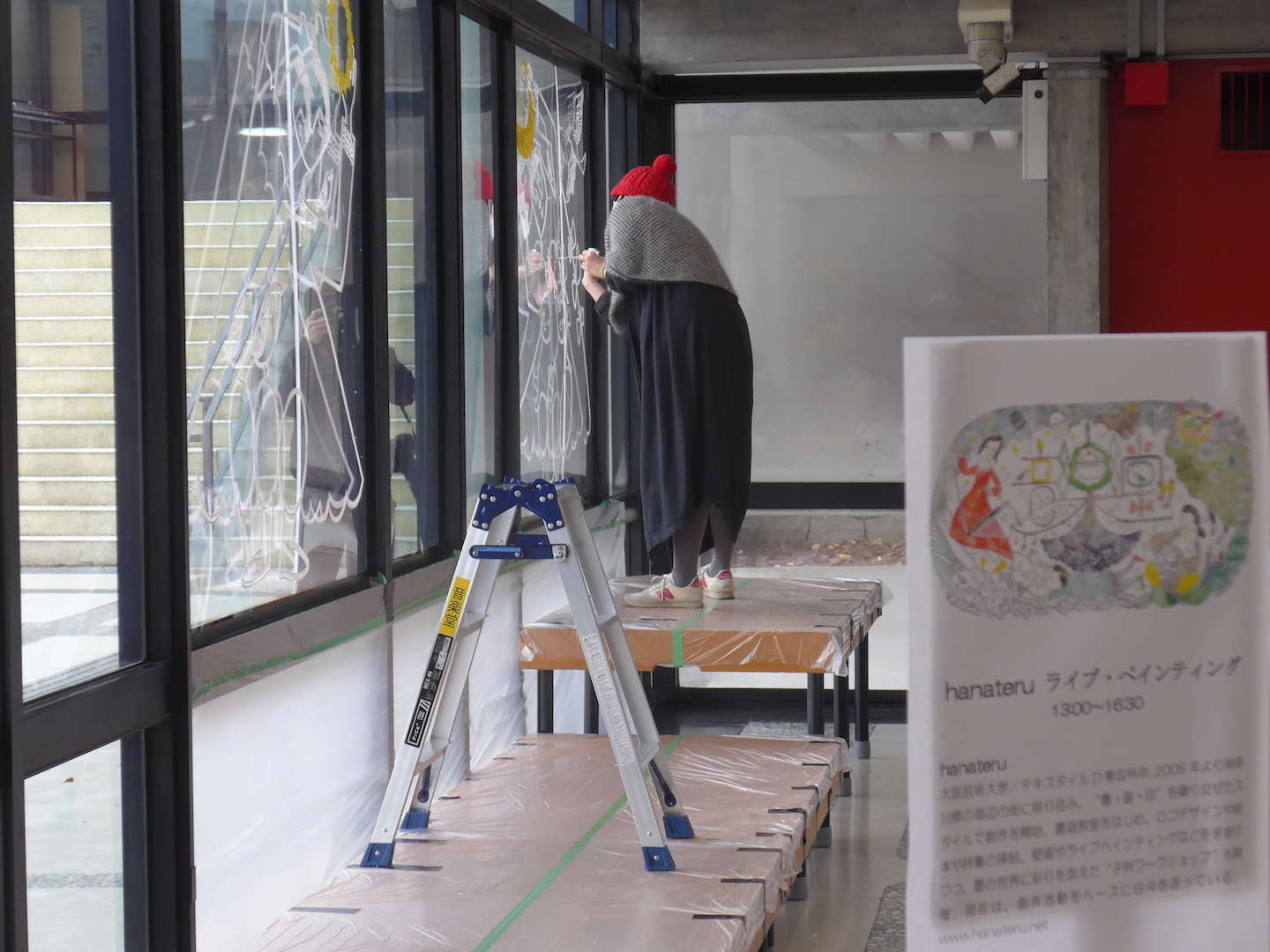 The live painting was done by calligraphy and painting artist hanateru. Based in Zushi and Kamakura, he is engaged in creative activities in his own style. Inspired by the "casual but lovely scenery" you see while taking a walk in the neighborhoodThis time, I used the glass wall of the concert hall as a canvas to draw a picture of "yin and yang".
The theme is "Circle of Light".

It's a big deal, so just remove the mask and click! 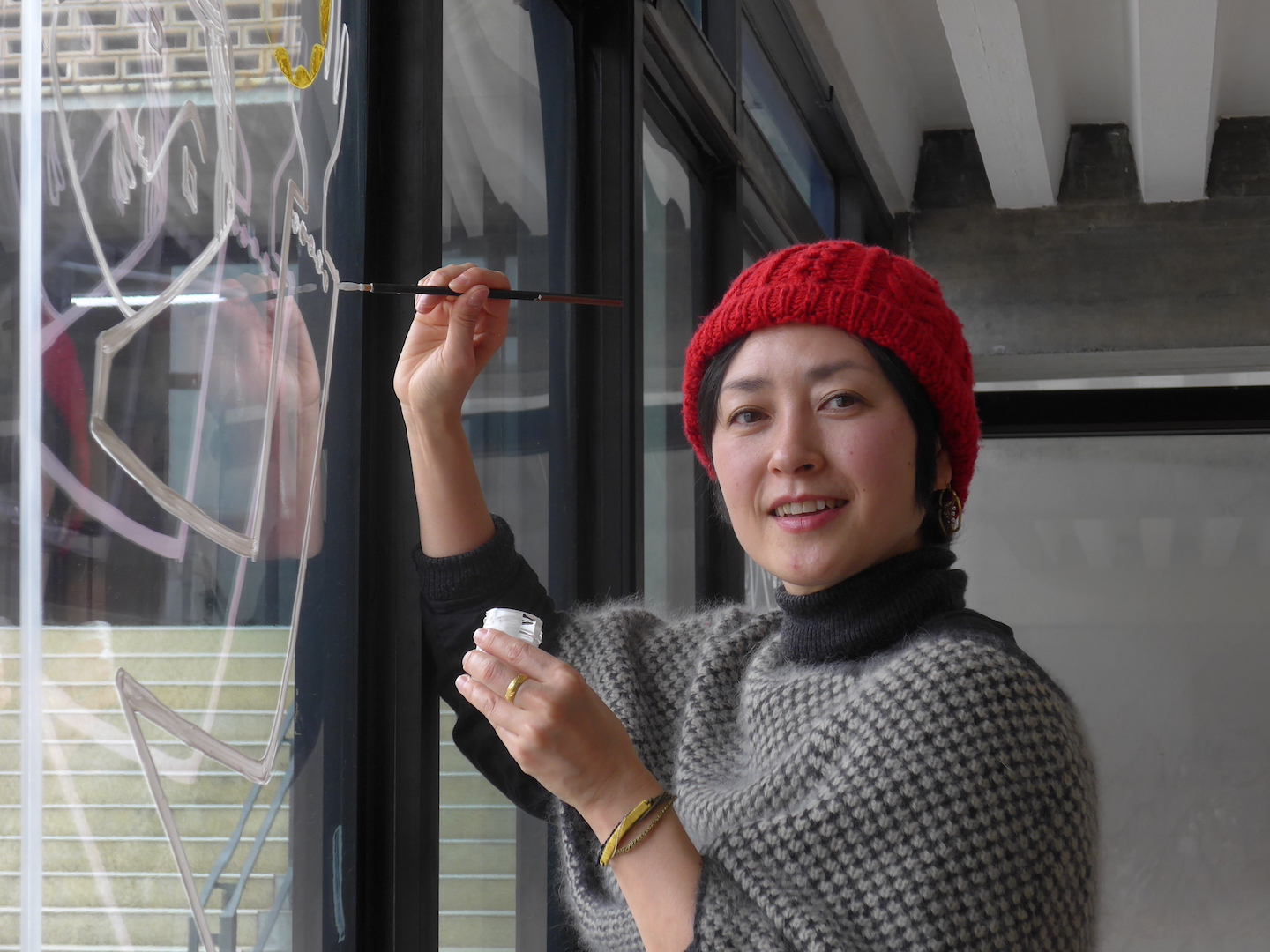 "I feel that the music hall, which has been loved and cherished by everyone, is a building filled with a lot of thoughts. It took me a little courage to draw a picture in it (laughs), but it feels very good.
The walls of the concert hall are colorful, such as red, green, and yellow, so I'm trying to keep my painting simple. "

Suddenly, a mysterious object was placed in the foyer. UFO? Or is it a big dorayaki? 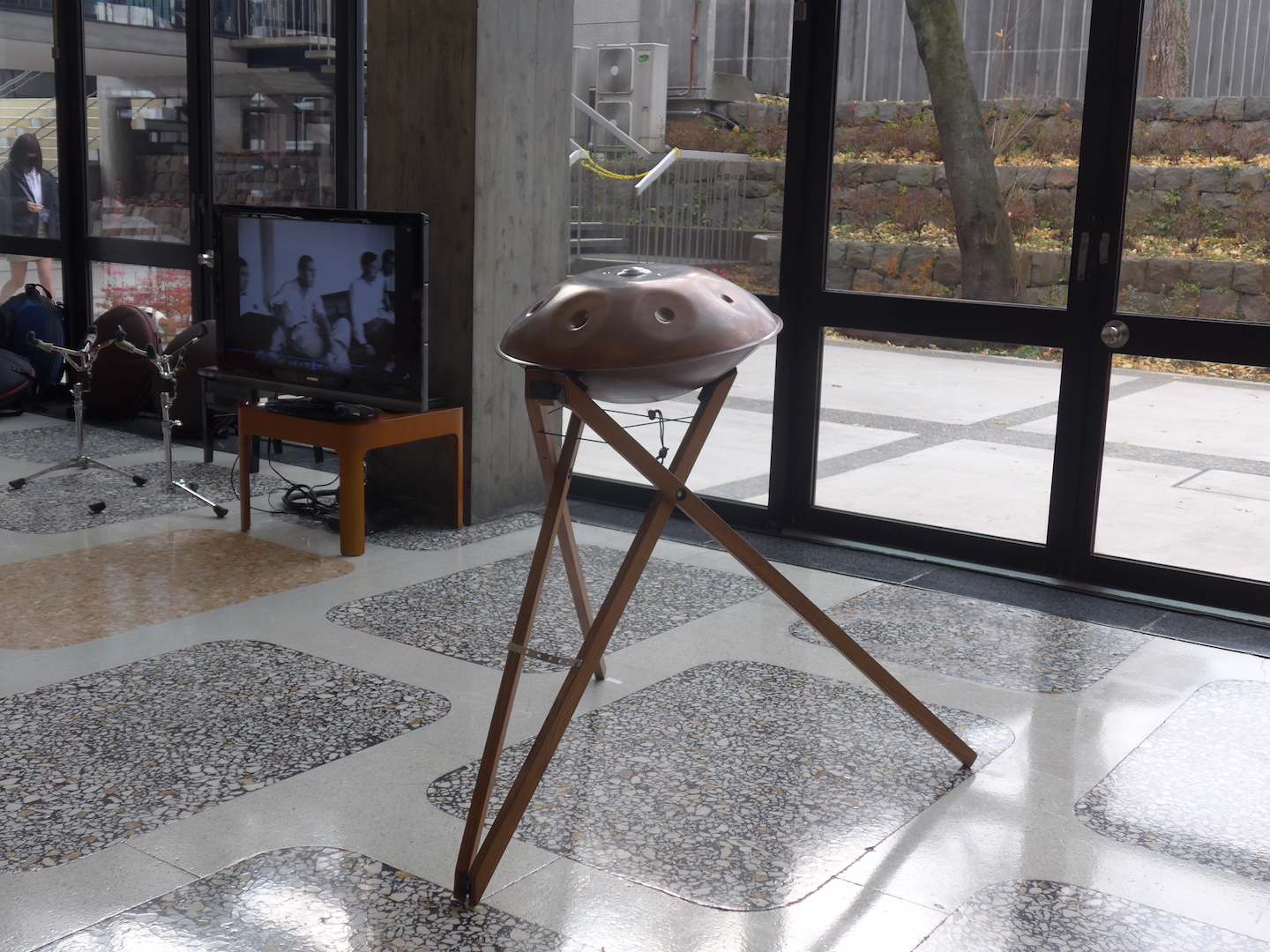 The object was a "handpan" played in another program.
The handpan is a new musical instrument that was born in Switzerland around 2000 <, and it has a comfortable deep tone reminiscent of gamelan, and it is said that it is becoming more popular mainly in Europe. It is said to be an evolved version of the Caribbean-born steelpan, and it seems that it makes a sound by flicking or hitting a dome-shaped metal plate with your fingertips. 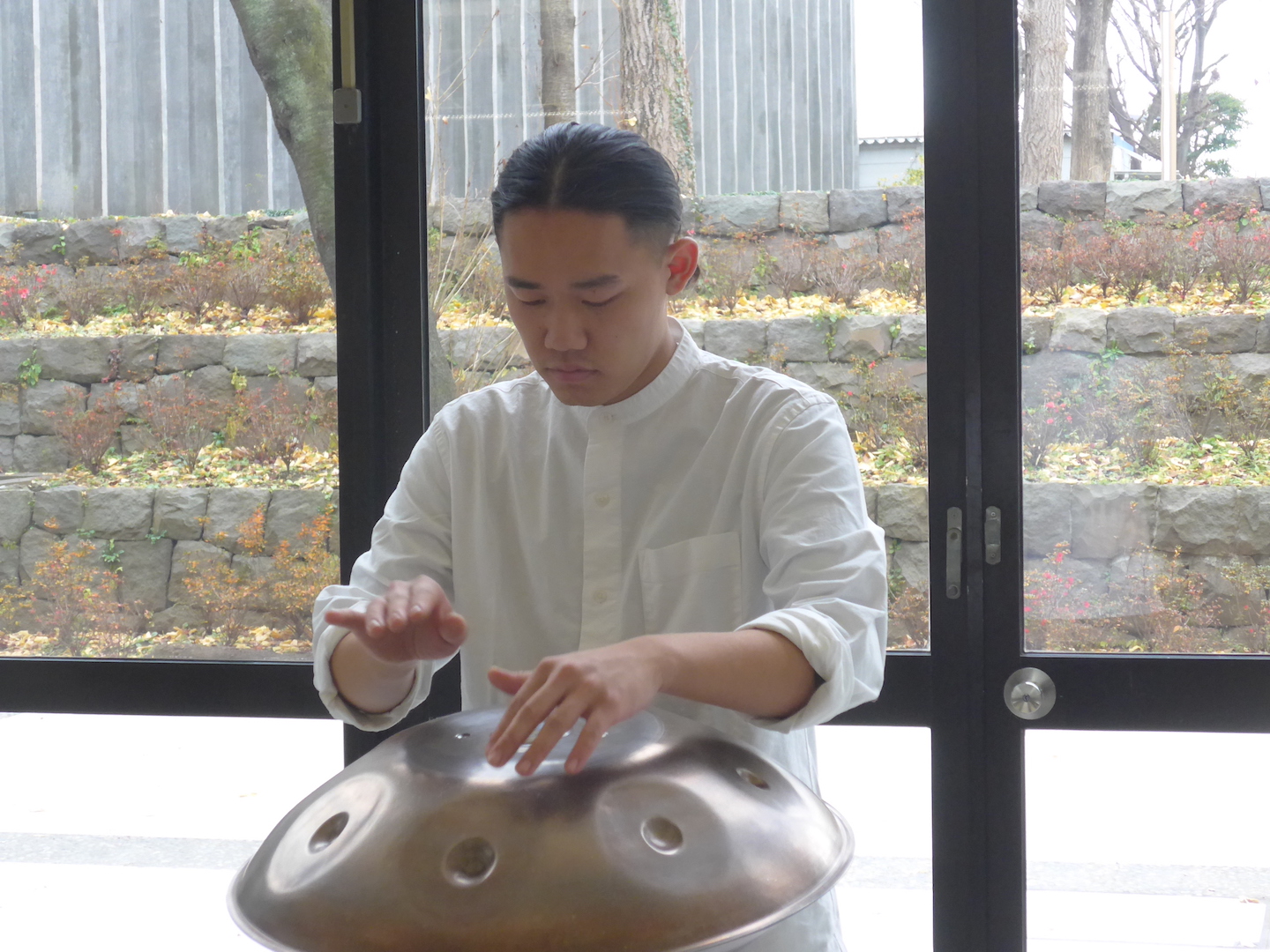 It is Ryohei Kubota who plays.
Handpa on the WEB when I was in the second year of high schoolWhen I saw the video, I was shocked to say, "I just want to hit it, I can't sleep without hitting my handpan!"

"At that time, there was almost no information in Japanese, and the handpan I finally found was quite expensive for high school students. Still, I hit the money I had saved when I was planning to buy a bass, and borrowed the shortage from my parents in advance. I managed to get it. "

Since then, he has established himself as a player by continuing to hit by trial and error without a teacher or instructional book to teach how to play.
The passion of young people, terrifying! 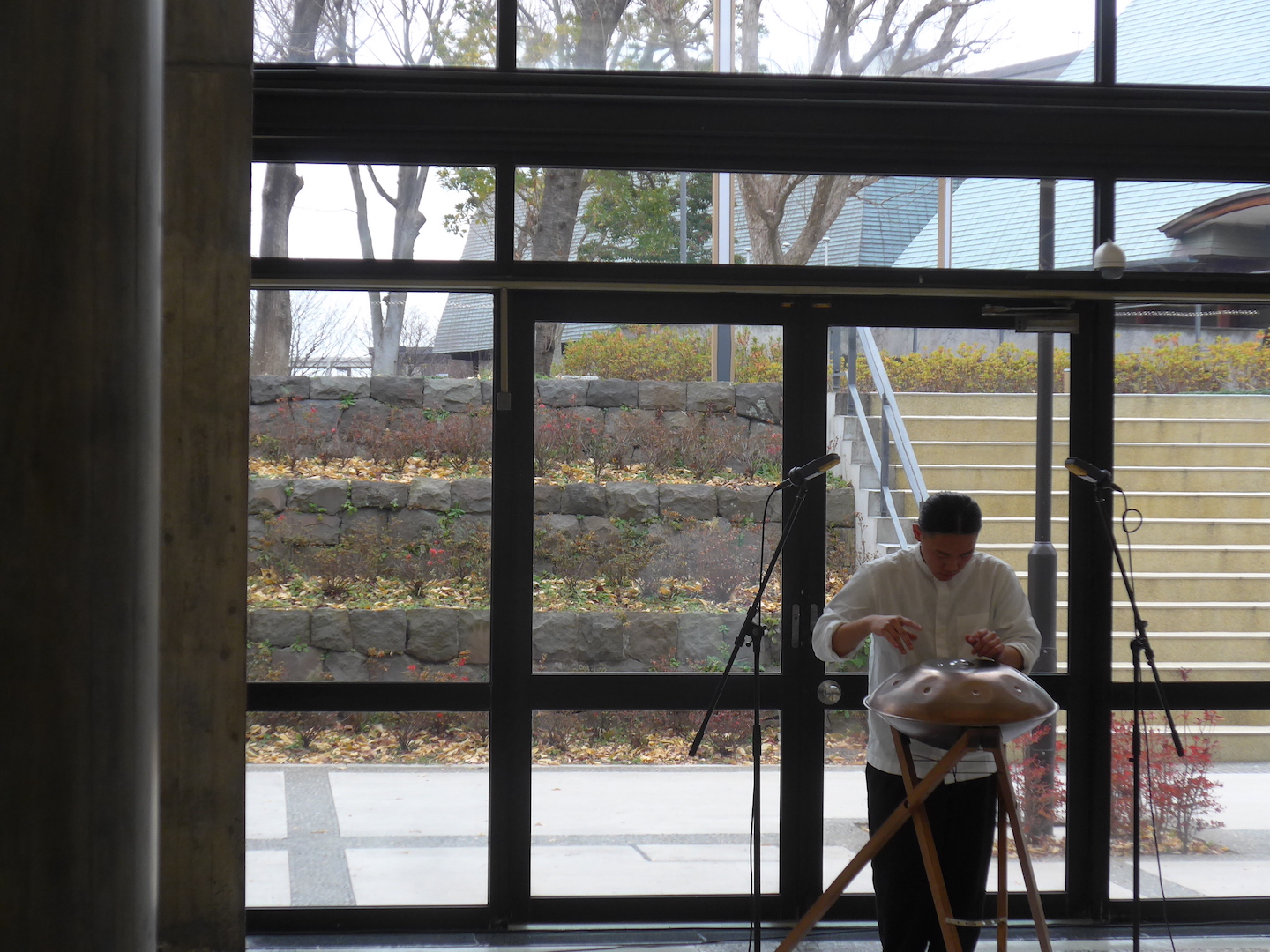 The sound of handpan echoes softly in the sophisticated and elegant space unique to Maekawa architecture.

"The foyer of the concert hall has a pleasant reverb and the sound spreads nicely. I'm looking forward to hearing the live sound of the handpan."

The number of customers in the foyer has gradually increased so that the sound of handpans will attract you. The foyer of the concert hall is spacious and some of the windows are open, so I thought it would be nice to have smooth ventilation. Since it was this time of year, the measures taken by the hall staff were even more thorough.
Look! A reliable figure of circulators lined up by the wall! 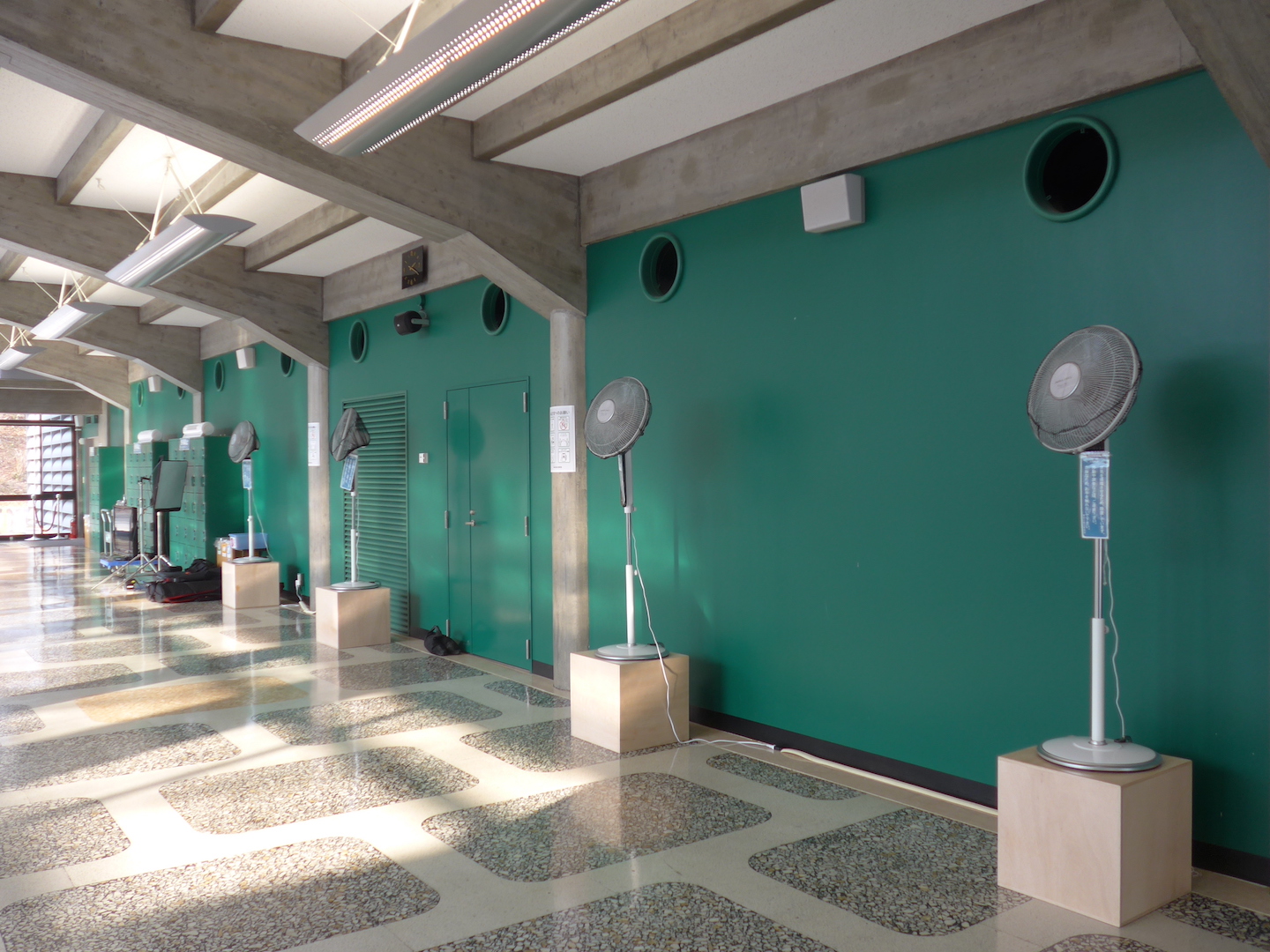 It looks like an object that is integrated with the modern architectural design of the foyer, so it makes me smile.

And while the fantastic music of handpan was playing, hanateru continued to draw.

The third program is the New Year live of "The Poo" held in the hall. It was a non-reserved seat, so I tried to sit in a different place from the one I was aiming for at the concert. You can overlook the beautiful hall made entirely of wood, including the walls and ceiling, which makes you feel refreshed. 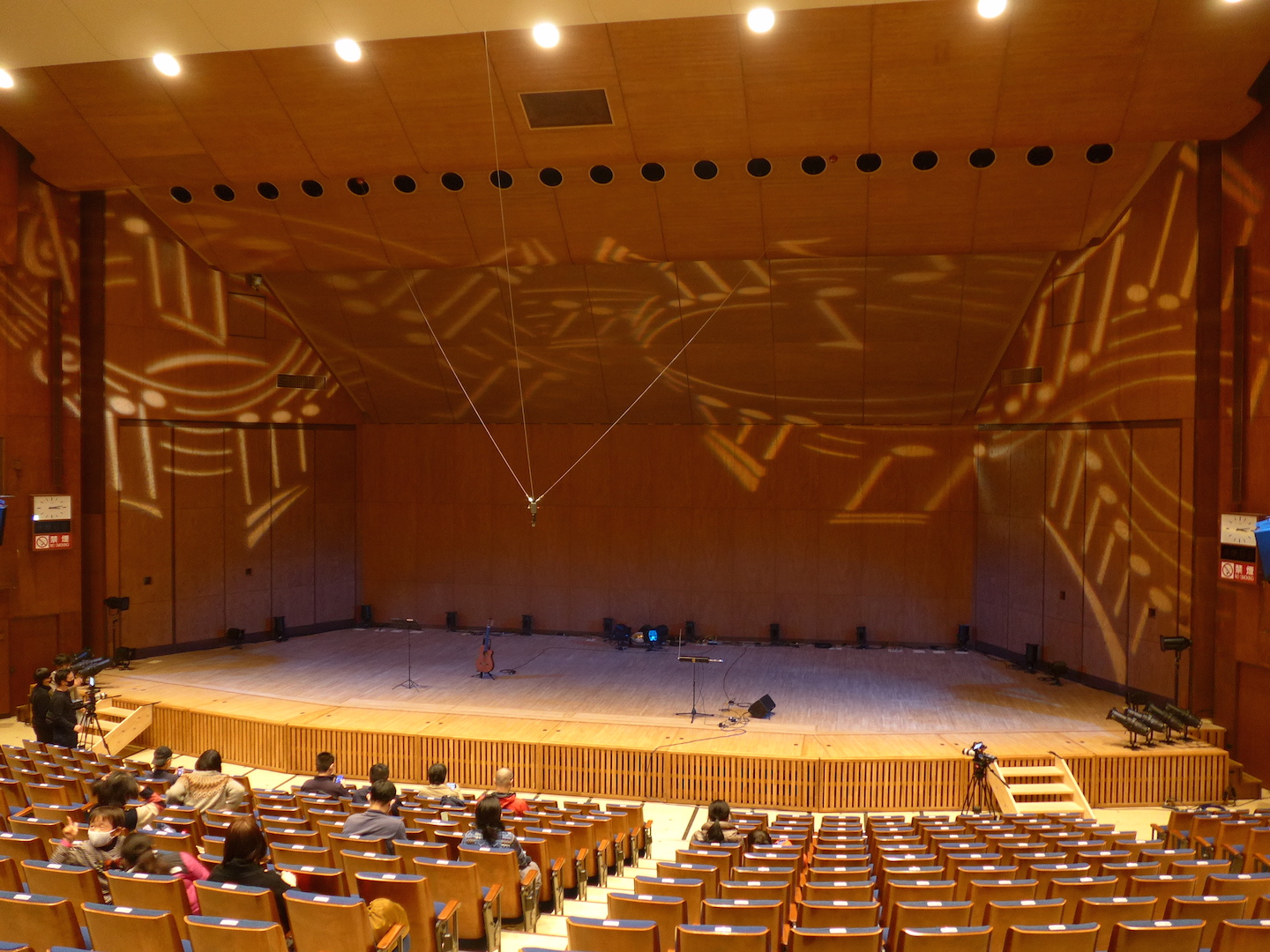 The Poo is a music unit of street corner Machio (guitar), street corner Machiko (Theremin), Sarutaro Kawashima (puppet), and Taro SONE (producer), and it is said that it has a surreal and stylish live performance that mixes MUSIC, Tale, and theater. ..
I'm not sure, but it looks interesting anyway. 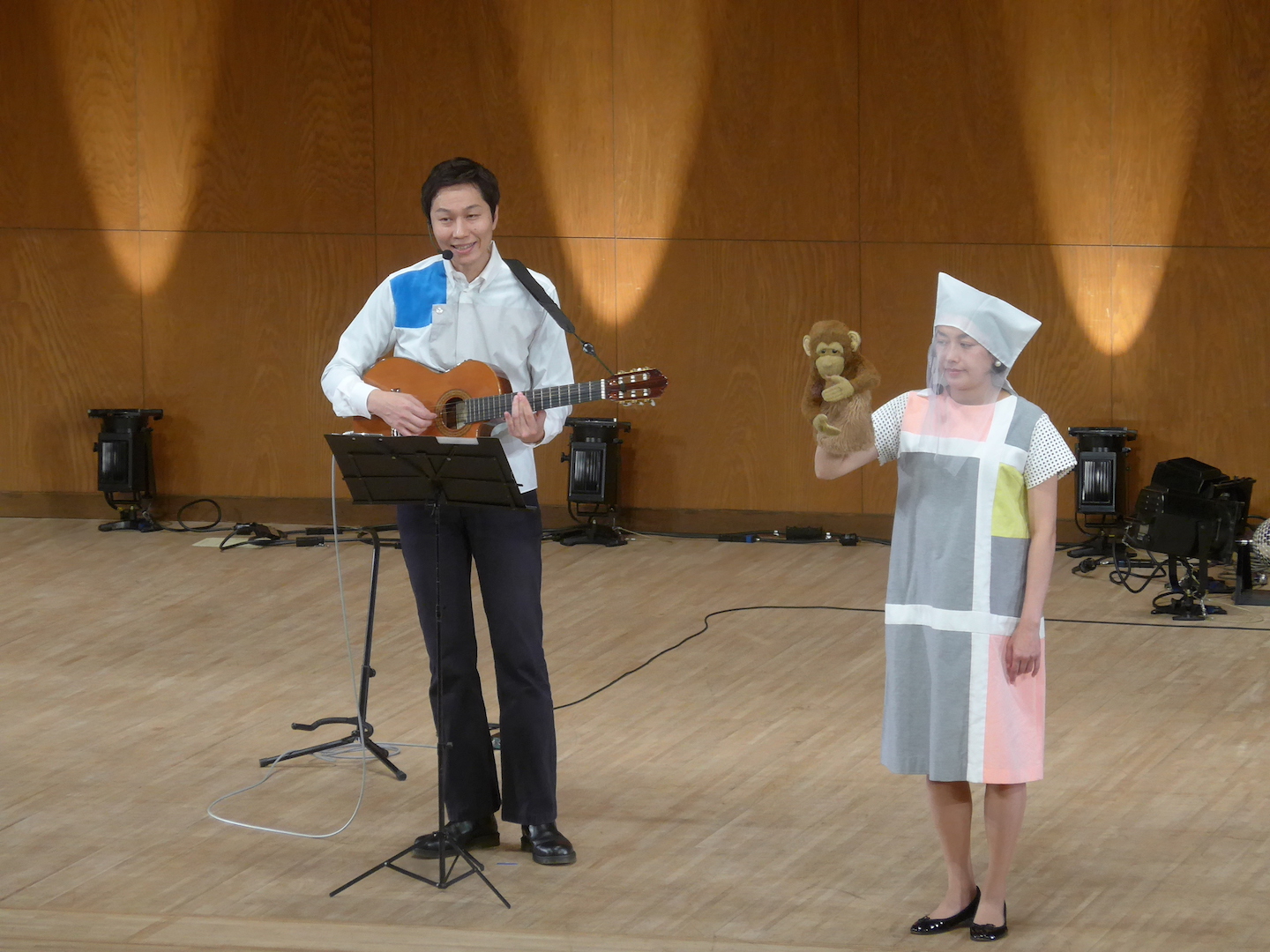 I was interested in "Theremin" played by Machiko. It is said to be the world's first electronic musical instrument, and it seems that the pitch and volume are adjusted by the position of the hand in the space without touching the main body. The performance scene is a mysterious feeling, like dancing or watching magic tricks. 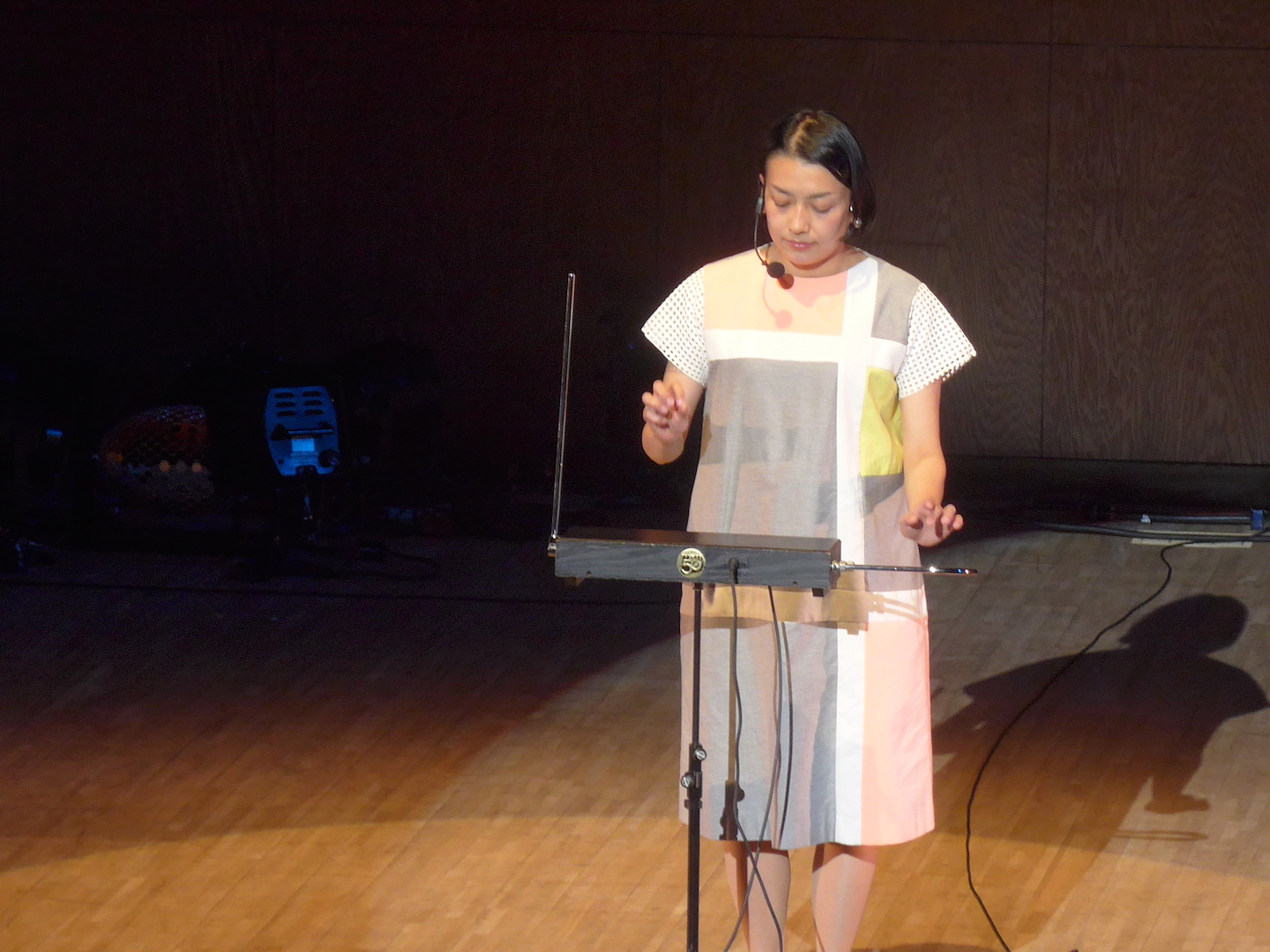 The 40-minute stage is full of talk, songs, and laughter.
If you explain in detail, it will be spoiler, soPlease see this on the concert hall channel @YouTube, which will be released at a later date. 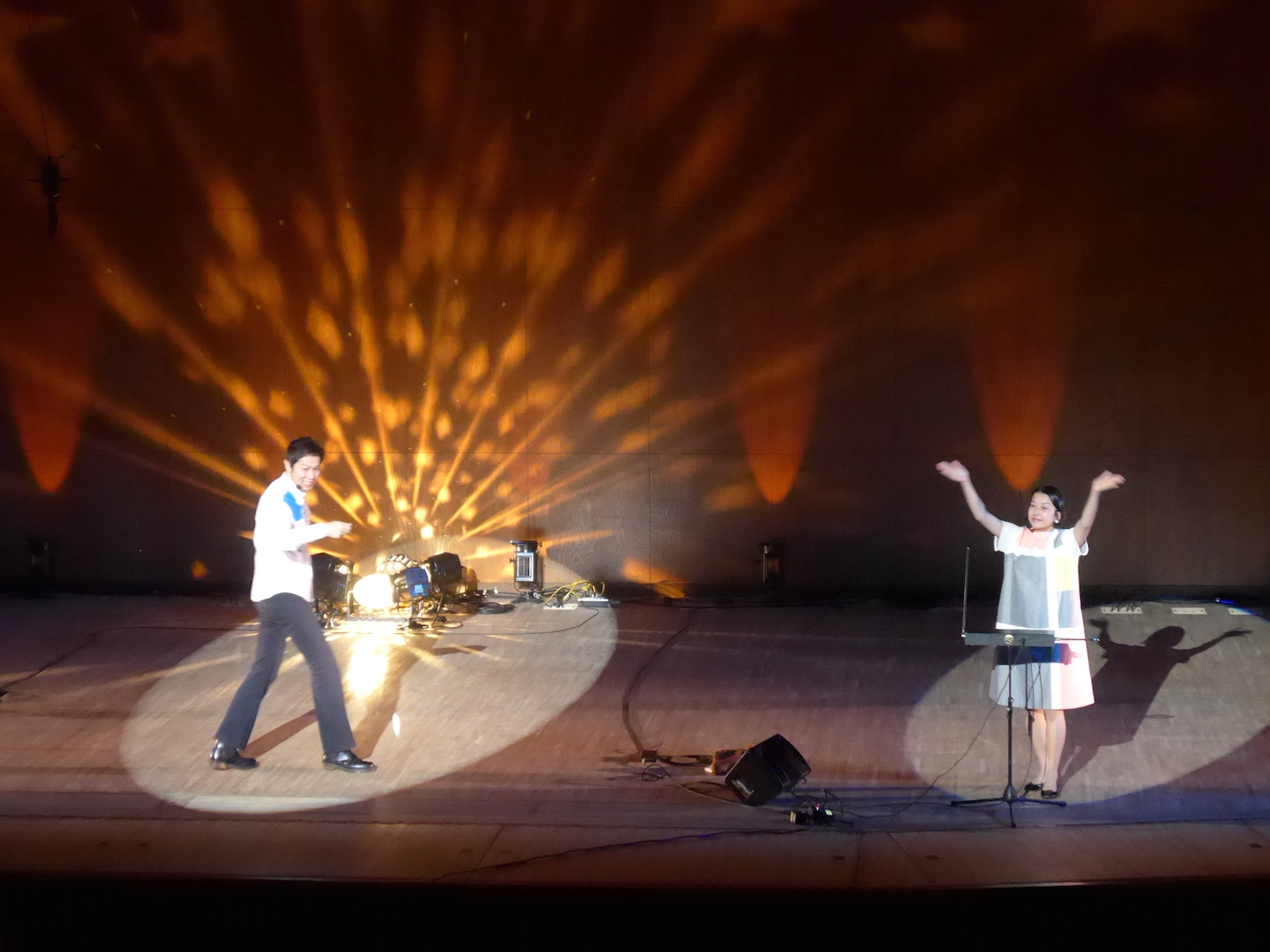 I've been to concerts at the concert hall, but I feel that the concert hall on that day was surrounded by a slightly different and friendly atmosphere.
The concert hall is such a comfortable space because you can enjoy free music freely.
Looking back while thinking about that, Hanateru 's painting was about to be completed. 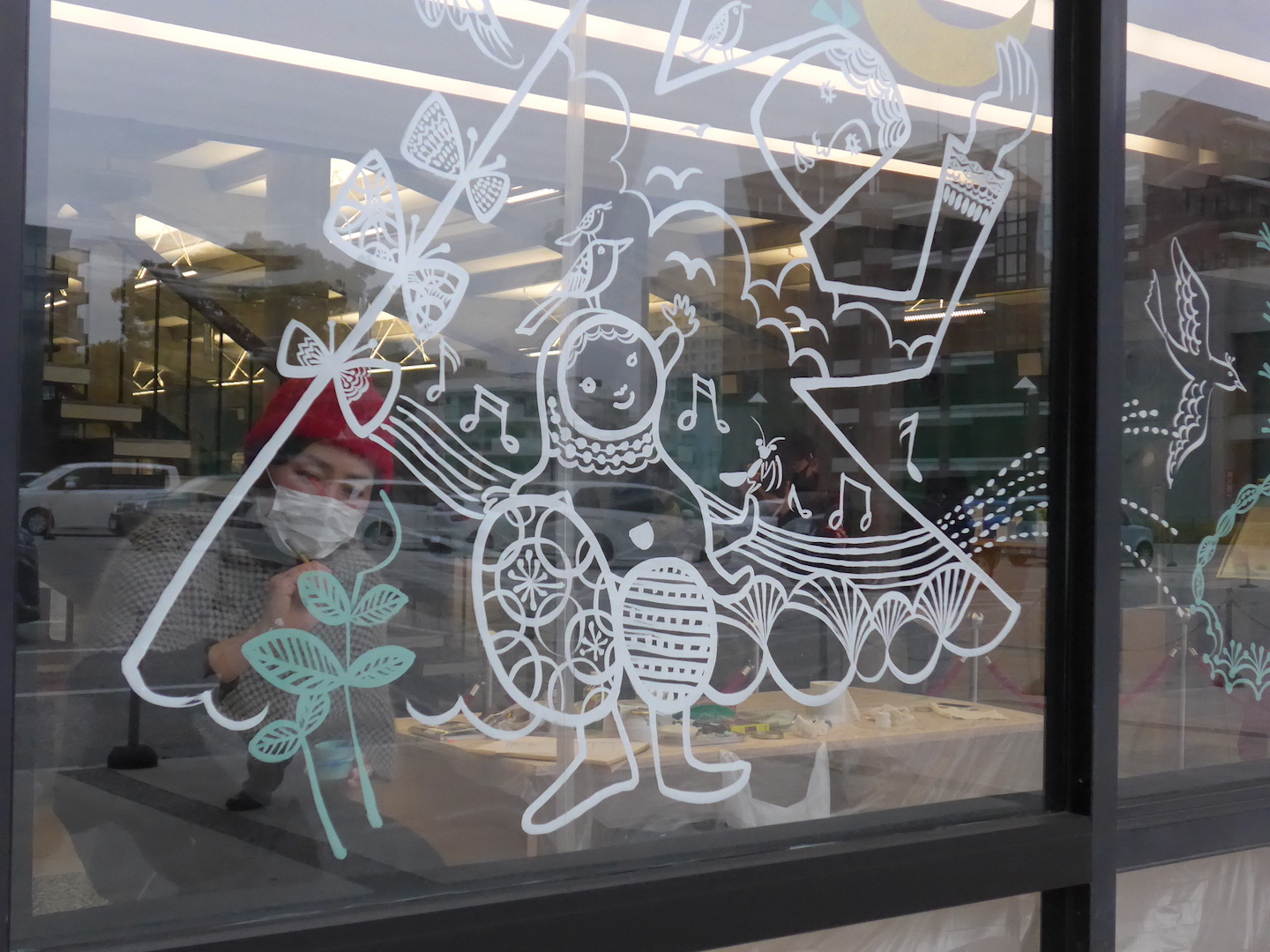 Here is a picture about 4 pm, which is about to close. Compared to the first image, you can feel the soft time that hanateru spun. 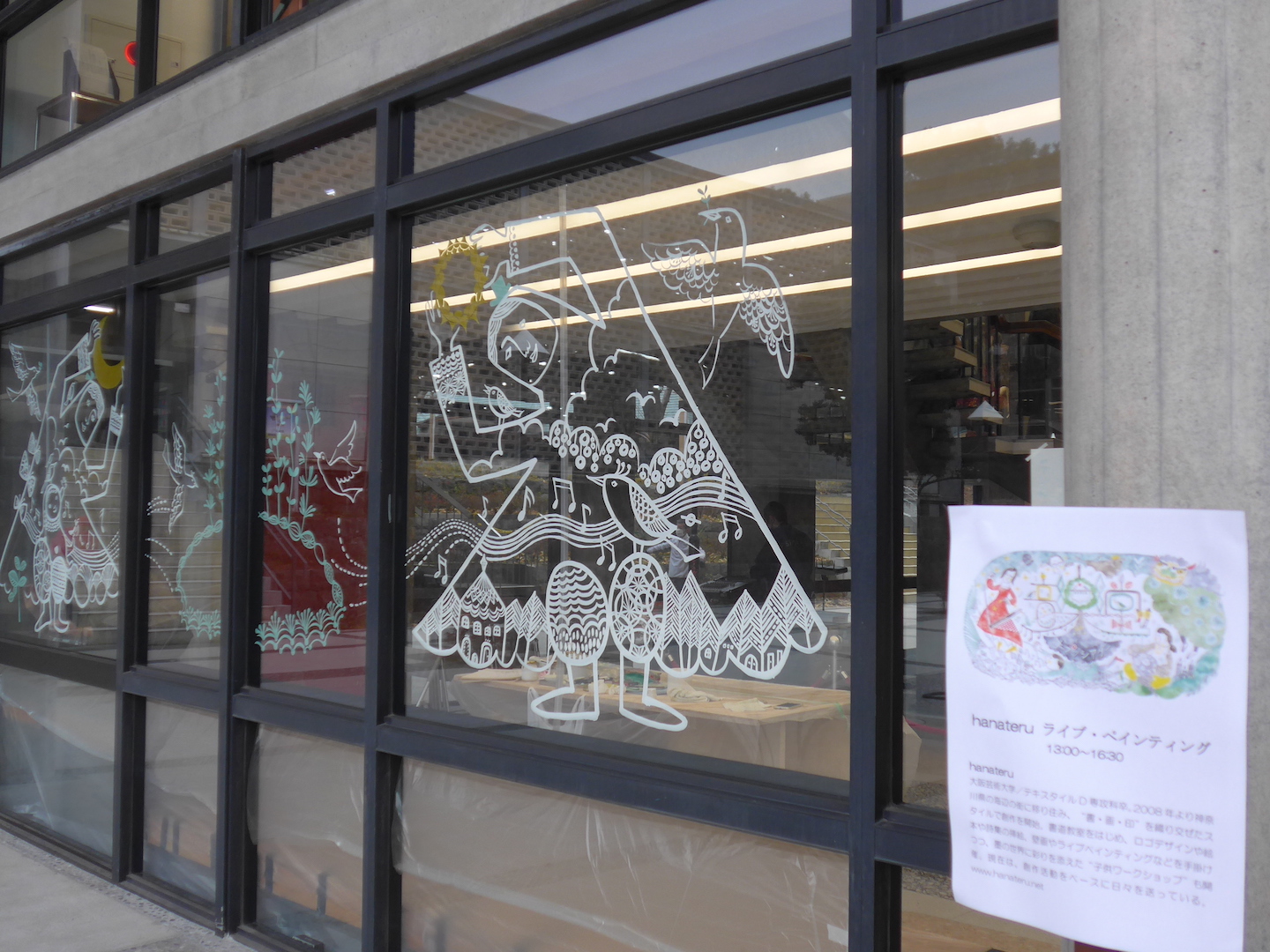 * The video of the concert hall open theater will be released in late January.

Kanagawa Prefectural Music Hall was opened in 1954 as Japan's first full-scale music hall as a public facility. Modeled after the Royal Festival Hall in London, the hall was designed to give the best sound effects, and was praised as "the best sound in the Orient" at the time of its opening, and the sound is still highly evaluated not only in Japan but also overseas. I will. The walls of the hall are all made of "wood", and its acoustic sound continues to impress people even 60 years after its opening. In 1998, it was selected as one of the "100 Public Buildings" by the Ministry of Construction as an excellent public facility rooted in the region, and in 1999, DOCOMOMO (modern) was selected as an important cultural heritage of the 20th century. It was selected as one of the "20 Modern Movement Architectures in Japan" by an international organization established for the purpose of recording and preserving the formation of buildings and environments related to the movement.