The attention to architecture is increasing, such as the National Museum of Western Art in Ueno, Tokyo, which has been registered as a World Heritage Site. With that in mind, I looked around and noticed that Kanagawa Prefecture has some wonderful architecture. Kanagawa Prefectural Library.
The designer, Kunio Maekawa, is one of Japan's leading architects, having studied under Le Corbusier, a master of the architectural world, and was involved in the detailed design of the Western Museum designed by Corbusier. What I want to say out loud is that the prefectural library opened in 1954. In other words, before the Museum of Western Art (opened in 1959)! Kanagawa prefecture is amazing.
A tour of such a wonderful building was carried out. Since it was a special project held on a closed day, it is OK to shoot inside the building, which usually requires an application. I have to go for this! 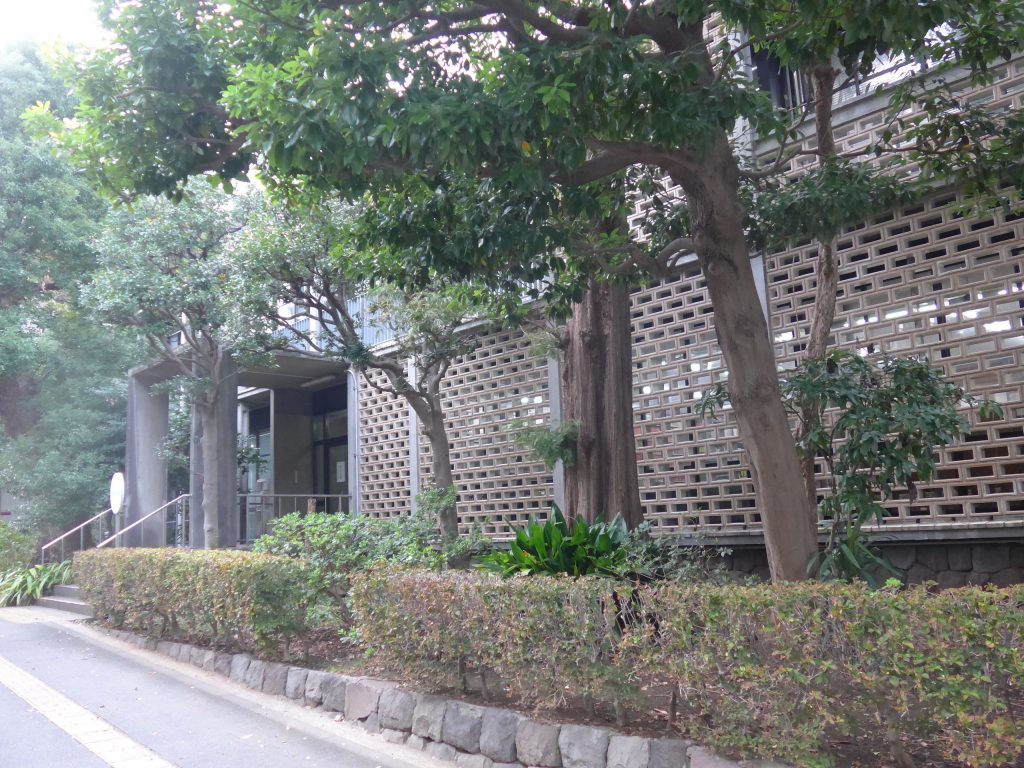 Since the museum is closed on the day of the tour, we will head to the new building entrance on the south side (youth center side) instead of the main entrance. Along the way, admire the outer wall of the main building. The form covered with hollow bricks called "Hollow Brick" is beautiful.
The current Hollow Brick was updated when renovation work was carried out in 2011, but due to budget problems, it was not possible to update everything. For this reason, unfortunately, there is no grid pattern beyond the staff entrance shown in the photo. 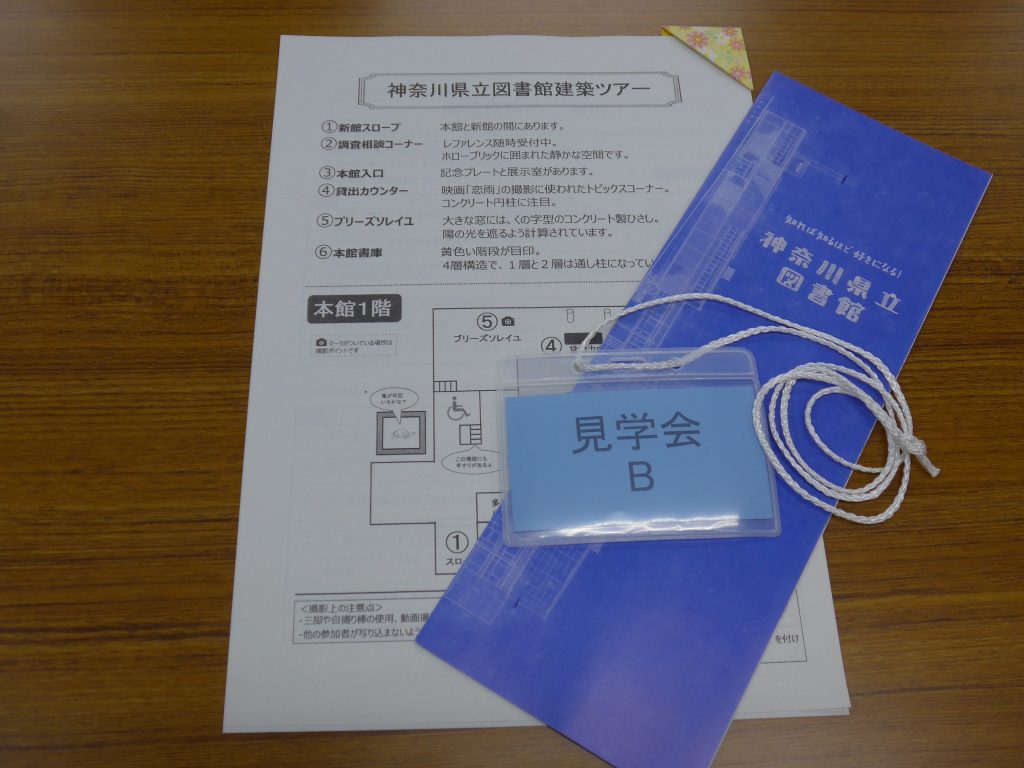 During the tour, you will first appreciate a valuable film that captures the state of the building when it was built. Although it is a reinforced concrete building, it is impressive that it was built almost entirely by hand.
By the way, Azusa Kito, who was a staff member of Maekawa Architectural Office, spearheaded the library design. He later designed the National Diet Library and is known as a pioneer of library architecture. 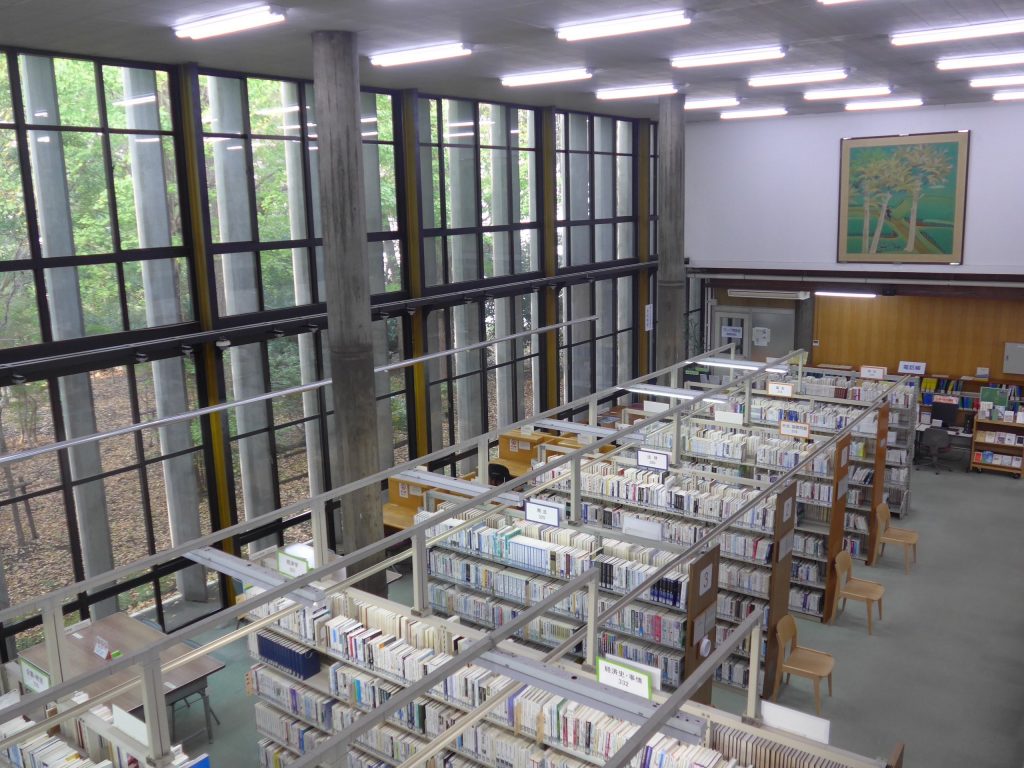 A staff member guides you to the general reading room.
The large atrium is open and comfortable. It is understandable that there are people who look at the green garden outside the window and call it "like Karuizawa".
On the outside of the large glass surface, curved louvers are arranged in an orderly manner, supporting the building and preventing the afternoon sun from penetrating into the building. 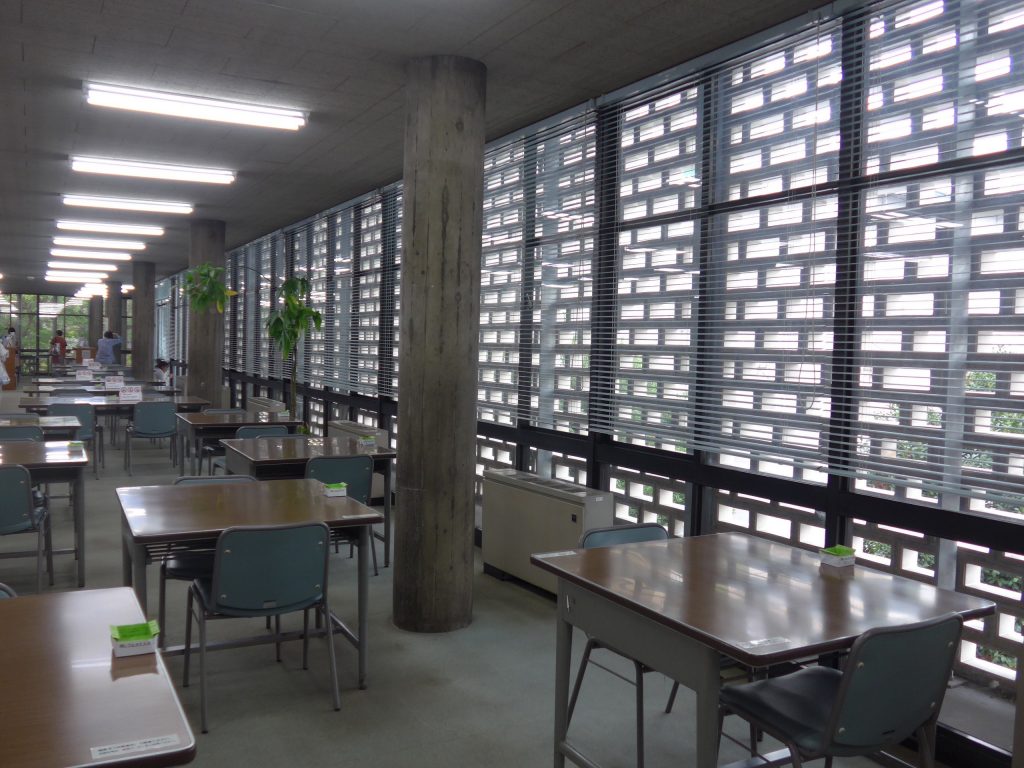 This is the reading room on the second floor. Looking at "Hollow Brick" from the inside, it looks like this. It is designed to block the view from the outside and ensure a certain degree of privacy, while blocking the sun in the summer and letting in warm natural light in the winter. 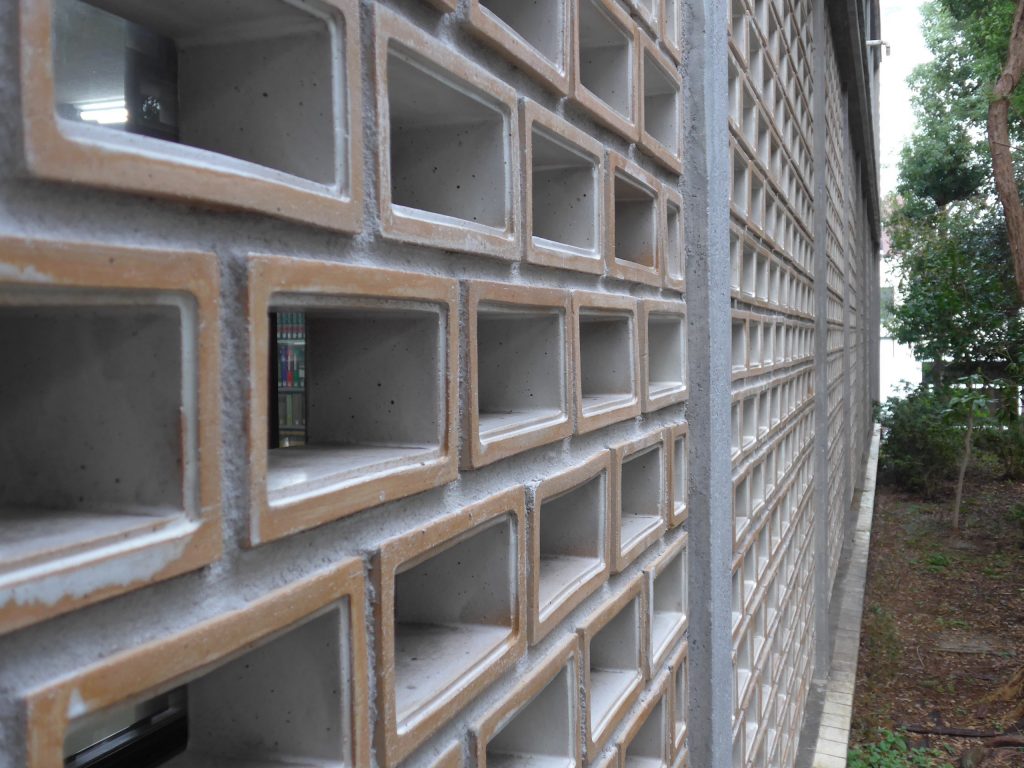 Hollow Brick from the outside again. By painting the inside white, the sunlight is reflected, and it also has the function of making the brightness of the room uniform.
The original was fired in a kiln in Aichi Prefecture, but the restored version was fired in Shigaraki. Since there was no soil or pottery left at that time, it seems that the glaze was repeated and restored and repaired. 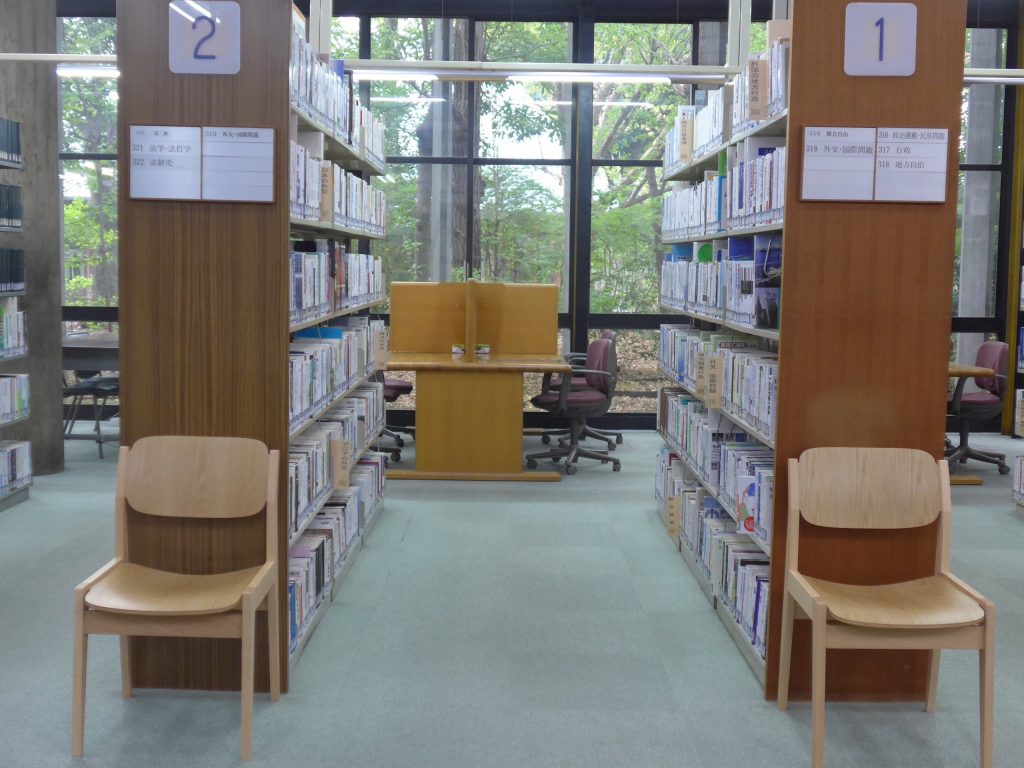 At the time of its opening, the chairs were also originally designed. It is said that the design pursued the most suitable form for reading books, but unfortunately the original has not survived.
What is currently in the reading room is a reproduction based on the materials. It seems that it has been faithfully reprinted, so please sit down and experience it for yourself. 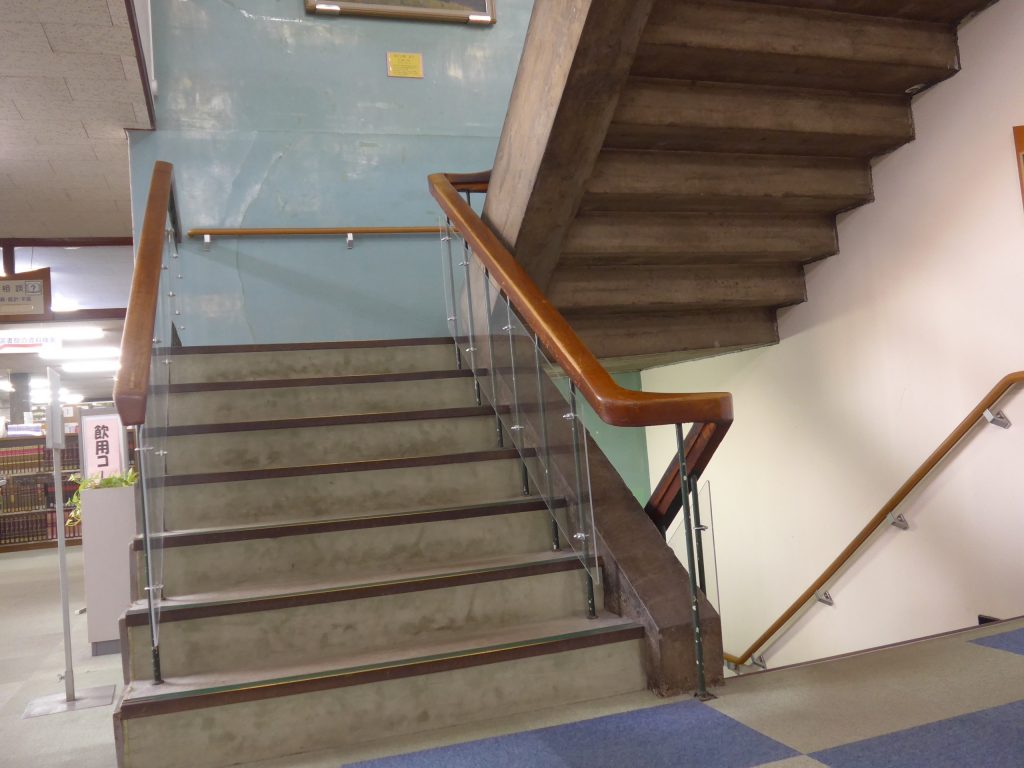 Stairs leading from the front door to the second floor. It is said that the features of Maekawa architecture are reflected in the shape and coloring of the handrails that are easy to grasp. 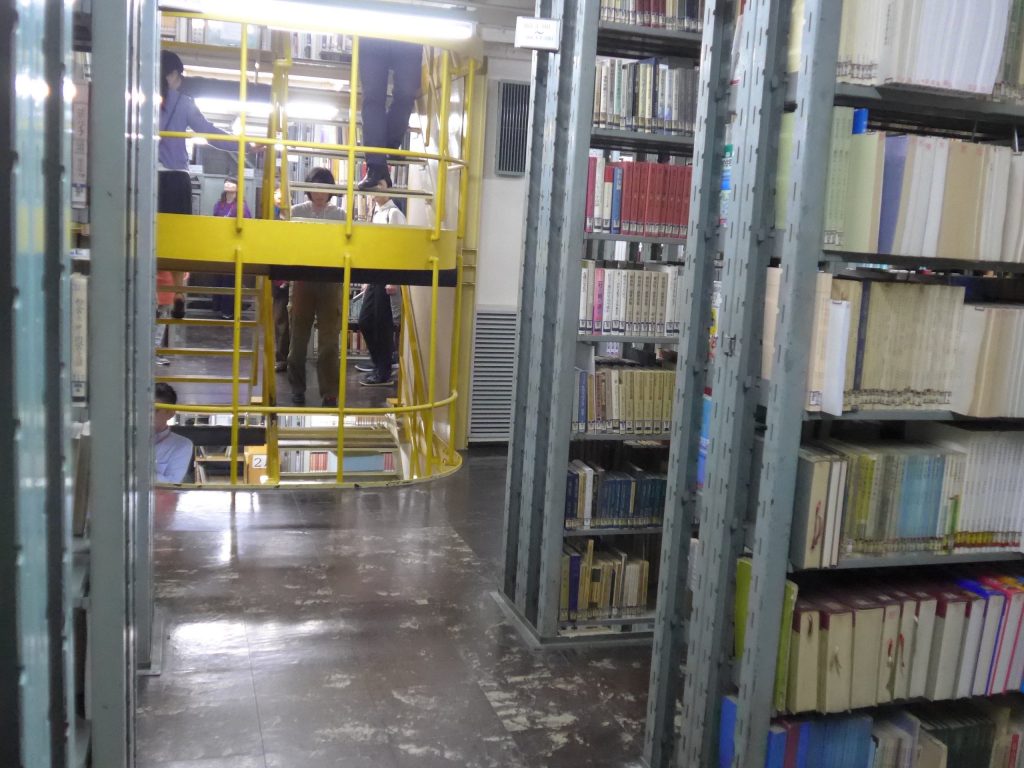 Infiltrate the library that you can't usually enter!
Bookshelves are installed through the first and second floors of the library. In other words, by penetrating the bookshelf for two layers, it also plays a role in increasing the building strength. 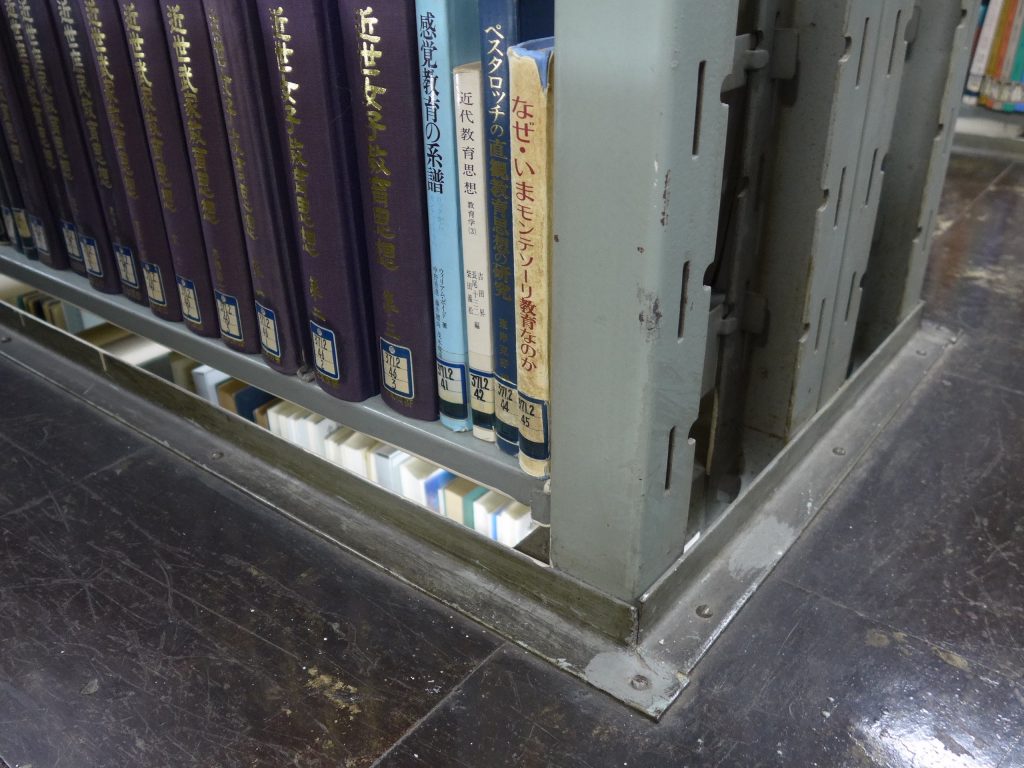 As a test, if you peek under the bookshelf from the upper layer, you can see the bookshelf on the lower layer through the gap. It's kind of strange... 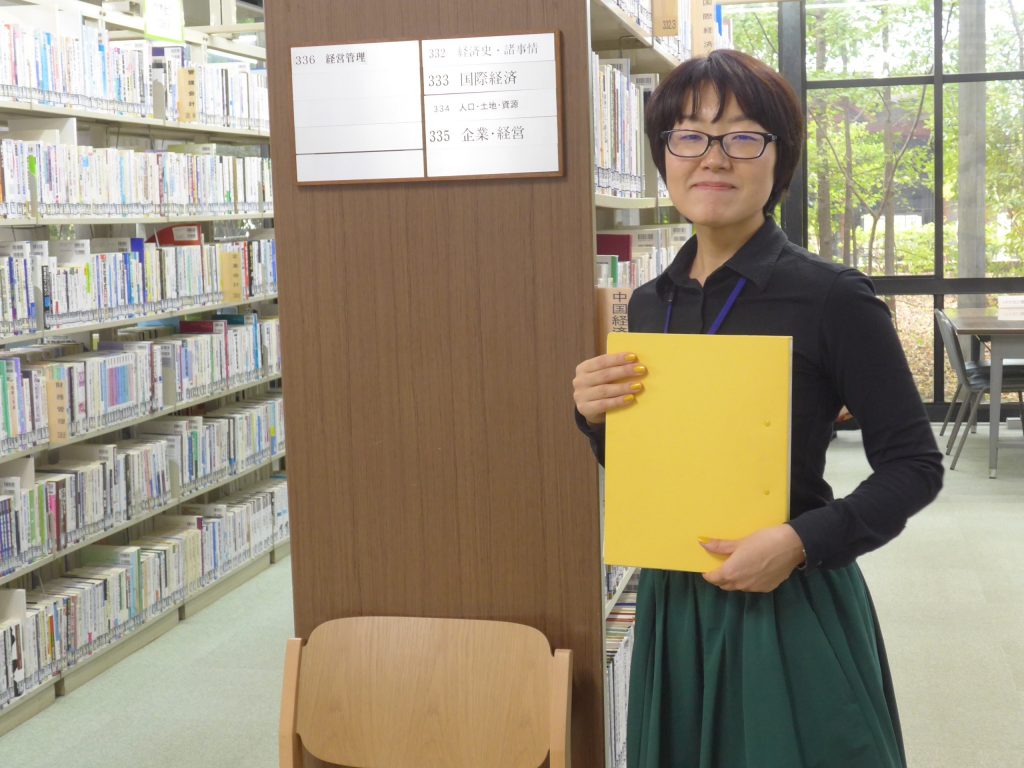 Ms. Mikiko Yamashita, who served as a guide for the library architecture tour (inside photography allowed). On the day of the event, I decided on the fashion of “green, black, and yellow,” which are the basic colors of library architecture. Way to go! 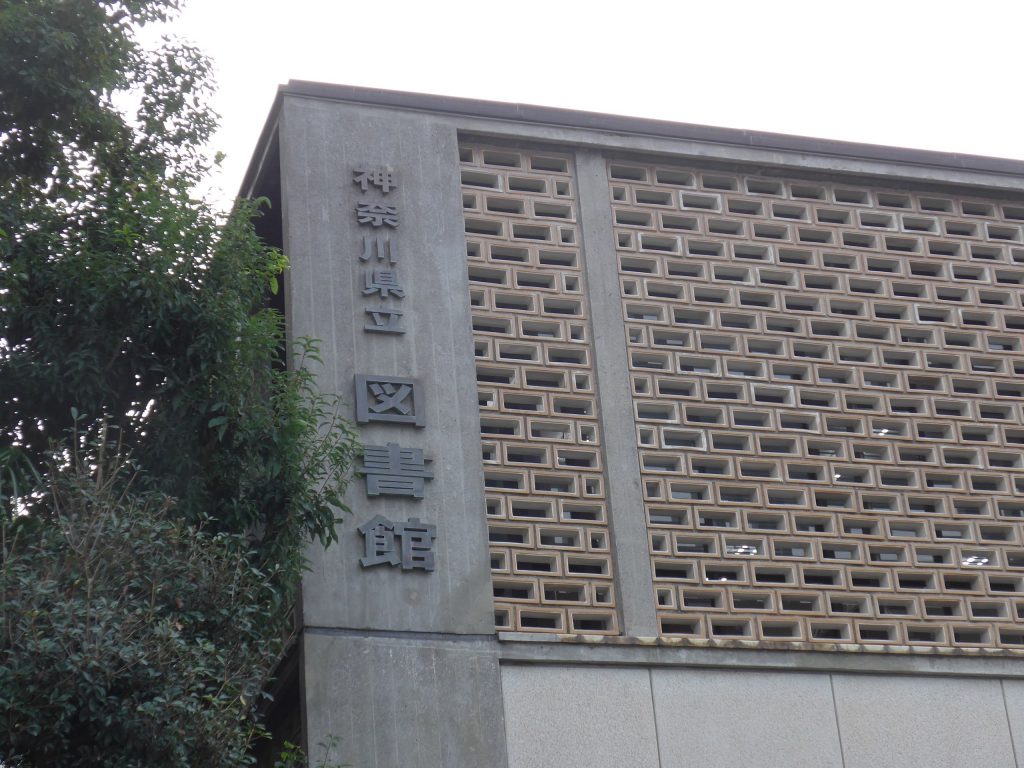 On the way back, when I turned around from the concert hall side, I noticed that "Kanagawa Prefectural Library" was displayed on the main body of the building. Beautiful and majestic.

I have always been indebted to the library, but I am amazed that the ideas and passion of leading architects have been poured into this comfortable space.

By the way, the music hall that was built at the same time is under renovation, so I would like to take up this again.