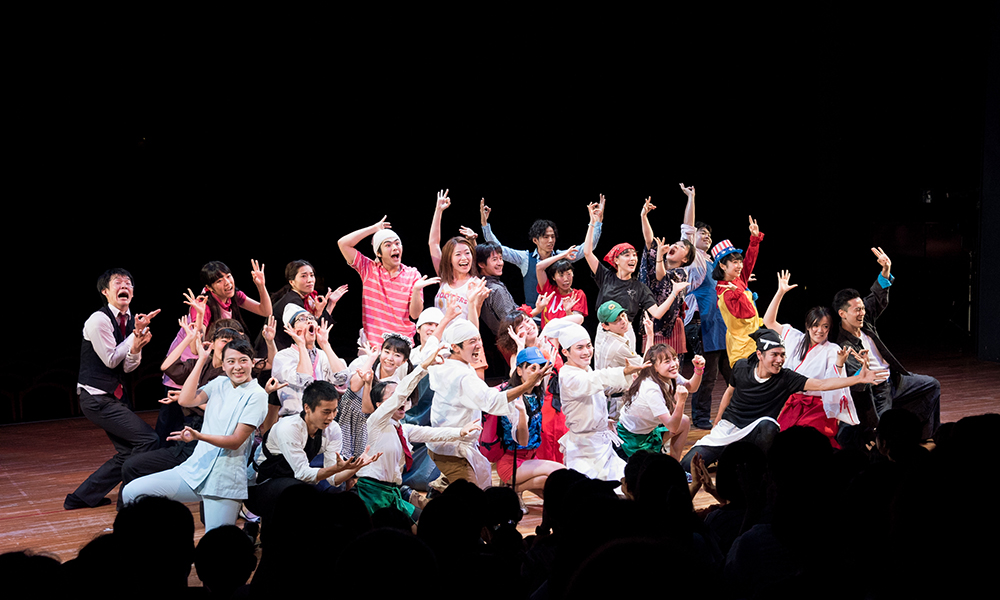 Surprising voices in the unique production of the audience seats on the musical stage depicting young people who spend their time working part-time and lessons!

In April 2016, "Byte Show <Magcal Academy 2016 Edition>" was performed as a result presentation. Arranging the musical that was performed at the theater company Toza in 2013, 14 students enthusiastically performed the young people who worked hard at their part-time jobs. The first performance they will challenge is "Byte Show YOKOHAMA-Youth Edition-". A new cast and a new episode were added to "Magcal Academy 2016 Edition", drawing a more multi-layered human pattern. "Byte Show" is an ensemble drama of young people who are enthusiastic about dance and drama, but spend their days immersed in part-time work for their daily lives. A dancer's egg that changes part-time, a girl who suffers between love and dreams, a troupe member who has passion but no money, a girl who dreams of being an idol, a cliff girl caught in a vicious office, etc. I will draw the figure fighting with in omnibus format. Moreover, taking advantage of the "surrounding stage" mechanism in which the center of the stage rotates, the audience seats rotate 360 degrees each time the scene changes! The audience was excited by the unique production, such as using the steel stairs for installing lighting as a construction site and using the "seri stage". The surprising mechanism of "rotating the audience" is said to be the first attempt in the history of the Kanagawa Prefectural Youth Center Hall in 1954.

The audience was also impressed by the songs and dances that were unfolding up close, and the appearance of young people chasing their dreams while spending their time working part-time. I was staring at the squirting heat while shining my cheeks. From the "Magcal Academy 2016 Edition" at the results presentation, the singing voice has been further refined and the expressiveness of dance has been enriched. It was two hours when I could feel the solid growth. All three days of performances are full thanks. It is said that they are considering performing original works in the future, so please look forward to the future Magcal Performing Arts Academy. The Magcal Performing Arts Academy has been steadily progressing since the results presentation in April. After the performance, comment from the three main cast membersI received it.

Moe Asa Kato / Ai
At the results presentation, the training period was a couple of weeks, but this time we practiced for a full month. After all, at the same level as the result presentation, the audience will not be satisfied. The amount of practice and advice increased in order to aim for the next step, and I ran with all my strength every day so that I could absorb as much as possible.

However, we are immature and this performance is just a passing point. I realized once again that it is still in the future. For example, in my case, the voice that says the lines and the voice that sings change. If the voice changes, it will be difficult to convey to the audience, so you must be able to sing as part of the play with the voice as it is acting. For that reason, I think I have to practice more and more.

The number of academies has increased further with the arrival of 2016 students. I'm inspired by everyone and I think I can't lose. I'm really happy to have such a place. I have been under the guidance of Kensuke Yokouchi for about seven years before this academy, and I still respect him now and in the past. I think it's a blessing to have such a great person see the acting. If you are interested, I would like everyone to join the academy. Let's make the best musical together! Mikako Yoshida / Yumi
I played the same role at the results presentation, but this time the number of lines and dances has increased overwhelmingly. Especially my role was difficult to express due to the addition of a romantic element. But it was also very rewarding. Enjoy communicating with everyone during the lessonsHowever, I absorbed new things more and more.

I've heard a little more voice than before, but there are still challenges. Every performance was unsuccessful, I was nervous, and I was keenly aware of my sweetness. I want to be able to play more and more.

With the addition of new people to the academy, I think that the enthusiasm and power of each person has spread throughout the venue. If you are interested, please come and visit us as you will have a wonderful experience that you cannot experience at school or at work. Yuumi Kitamura / Kazue
This is my first time to participate in the Magcal Performing Arts Academy. It was the first time for the stage to rotate, and everything was beyond imagination. I'm surprised that I'm appearing (laughs).

It was also a lot of fun to practice with everyone at the academy. There are many high school students in the academy, so I am 24 years old and the oldest. While thinking, "Everyone is young!", I was instructed together. I was often inspired.

I would like to continue to stand on the stage forever. Singing and dancing are areas where the results of practice are visibly manifested. This performance is a whole stage where the cast members' enthusiasm and the desire to bet on the stage overflowed, and the results were announced.I also felt the growth from the society. Please look forward to the Academy's original works scheduled for next year and the future of the Academy.