Regarding the above performance scheduled from March 19th (Sat) to 21st (Mon/holiday), it was confirmed that one of the performers of the academy was infected with the new coronavirus, so the audience and performers We will consider the safety and security of the person and staff first and cancel it.
We sincerely apologize to all the customers and people involved who were looking forward to the performance.

About ticket refund
Tickets purchased will be refunded due to the cancellation of the performance.
As soon as the timing and method of refund are decided, we will inform you on the following website.
here

The Magcal Performing Arts Academy was opened in 2014 by Kanagawa Prefecture to develop human resources for the performing arts, with playwright and director Kensuke Yokouchi as the director.
Here at the Kanagawa Prefectural Youth Center, the academy students have spent their time learning from each other, taking full-fledged and practical lessons in vocal music, dance, and acting from leading instructors in each field.
The work "Byte Show", which is the crystallization of the efforts of the Academy students, has been performed in theater-in-theater format since its first performance in 2016. By creating audience seats on the revolving stage of the Kanagawa Prefectural Youth Center Momijizaka Hall, the audience can rotate 360 degrees. , realized that the entire theater was used as a stage, became a hot topic, and completed all five performances by 2020.

Such an academy will stage a new omnibus musical in March 2022.
Encounters and partings, young people's passion and tears, joy and bonds.
The omnibus musical "Momijizaka Memories-Dedicated to those who climbed this slope-" revolves around the memories packed in such Momijizaka.

What is the thought put into the culmination work sent by all the Academy students?
We interviewed Mr. Kensuke Yokouchi, who is the creator and general director.

The reason why I decided to open the academy was that it was a prefectural project to revitalize Kanagawa Prefecture, with "culture" as one of its pillars. At that time, I was approached by various cultural figures with connections to Kanagawa Prefecture.
When I heard about the purpose of promoting Kanagawa's arts and culture, the first thing that came to my mind was to do something about a place that was very important to me, the Kanagawa Prefectural Youth Center.
At the Kanagawa Prefectural Youth Center, in a time when there was no word for "workshops" today, famous up-and-coming playwrights and directors held lectures for high school students, and held junior high and high school theater competitions. It was a pioneering and exceptional theater hall.
So, I, who was enrolled in the theater club that I was thinking of quitting soon, saw Kouhei Tsuka's "Atami Murder Case" for the first time, which later became a masterpiece.

I was so moved that there was such an interesting thing in the world, and my life completely changed.
The Youth Center was where I decided to pursue a career in theater, and became my starting point. His maiden work, which he made at the age of 16, was admired by Tsuka, was also performed at the Kanagawa Prefectural Tournament held here.
The place that had been shining as a mecca for young people who love art was gradually disappearing as the times changed. With that background, I think it's safe to say that I started this project because I wanted to make this precious place shine again, and I want to give back in my own way.
Then, we decided to create a “place to nurture young people who specialize in theater,” which was not particularly present in Kanagawa at the time, at the Youth Center. In the future, he set a goal of creating a "school" specializing in theater in Kanagawa Prefecture.

Since we have created a place, we have to nurture it properly. He advocated rigorously educating and fostering “genuine professionals.”
Beginning with Lucky Ikeda and Keiko Fukasawa, the instructors seriously taught with all their might.
However, it was not easy to raise a young person with no experience from scratch, and I struggled for the first two years or so (laughs).
From about the third year, things finally started to take shape, and gradually some of them went on to music colleges, while others started their acting careers as professionals. After all, it was worth doing. More than anything else, I was deeply moved by the fact that I was raising a child who was about the same age as I was at the place where I first became interested in theater.

A scene from "Byte Show"

``Byte Show'', the fruition of the efforts of the academy students

In 2016, the Academy students were finally ready to perform.
It's called Theater in Theater, and we made full use of the 360-degree stage by making audience seats on top of the stage and rotating them with the audience. To be honest, at first, I was worried about the number of people in this theater that can accommodate 1,000 people, so it was a result of trial and error, but it turned out to be a great success. It was a performance that could only be done at the Kanagawa Prefectural Youth Center, which has a revolving stage.
And at the curtain call, I vowed, "Someday we'll fill the audience."

A scene from "Byte Show" 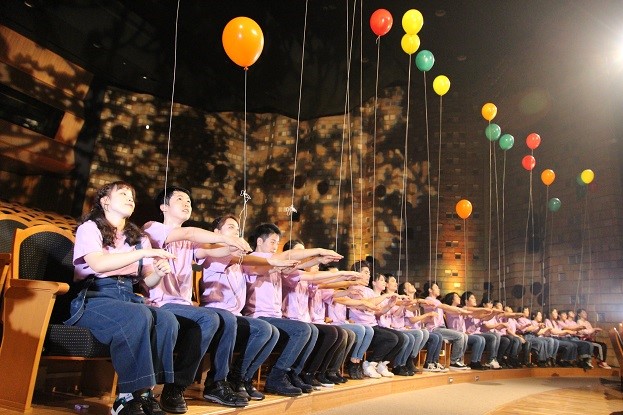 A scene from the ending of "Byte Show"

The Kanagawa Prefectural Youth Center is a mecca for theater and a sacred place for me.
Aiming for this place built on Momiji-zaka, many people, including myself, have climbed the slope with their own thoughts in mind.
In particular, the story of the magistrate's office, which prospered from the end of the Edo period to the Meiji period, is a theme that I have been warming up for a long time.
While tracing history in this way, I made an omnibus-like documentary-style work about the scenery, places and memories that this slope has seen.
As I mentioned earlier, the audience seats have been placed on the stage until now, but this time, for the first time, we will use the real audience seats as “audience seats” (laughs). By doing so, the entire venue is made into an image of a slope.
The famous scene of "Byte Show" that was born on this slope is also included, and I hope you enjoy the performance of the culmination of all-out challenges.

Passing the baton to the next generation

As I said at the beginning, when I founded this academy, the final goal was to establish a school. It actually happened. In April 2021, a performing arts department was established at Kanagawa Prefectural General High School. This is amazing, as it will be the first public high school in the prefecture to offer a specialized performing arts course. And students are scheduled to appear as volunteers in this performance.
I want this performance to be a place where we can take over what we have been doing so far, "I want to cultivate the real thing, I want to learn."
And of course the performers, but I'm sure that among the people who go to the theater, as I did myself, there will be people who come into contact with theater here at the Kanagawa Prefectural Youth Center, and who will be connected to theater and stage work in the future. I think there should be.
I'm really looking forward to it.

A message to the academy students leaving the nest

Hmmm. I take pride in the fact that the good seed and the first water were firmly given to each of them. Some of them have begun to sprout, and to be honest, some of them haven't bloomed yet (laughs), but I planted good seeds, so I want them to find a place where the sun shines until the flowers bloom.
And I want you to cherish the bond that was born here forever. Of course, I care too.
And someday, "Let's meet again on this slope!"

A message to future aspiring artists who want to study theater

A play is very deep. For those of you who have just begun to take an interest in theater and the stage, the world you see is probably still small.
One thing I want to say to you guys is, "Take another step and see the world from different perspectives."
Theater is not just acting. Directing, composing, choreographing, managing...there are so many worlds that you can't touch unless you take a step further. After that, I want you to find a place that suits you.

In the interview, Mr. Yokouchi's pure passion for the Kanagawa Prefectural Youth Center,
I was impressed by the very soft atmosphere filled with love for young people and warm kindness.
In the past, a boy whose life changed when he encountered theater at this place has now raised young people who will be responsible for the future of the theater world at the same place.
I would like you to visit and enjoy how many “Memories” will be fascinated.