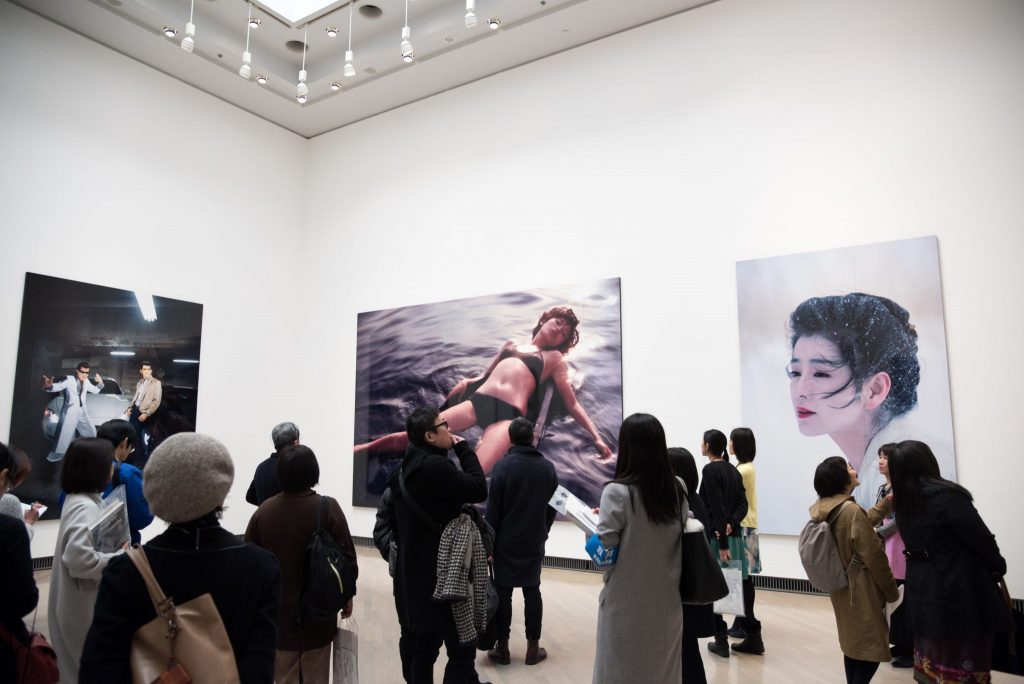 The subject of "Kishin Shinoyama Exhibition Photographic Power THE PEOPLE by KISHIN" is all people. What's more, "celebrities known to everyone", such as actors, singers, musicians, athletes, dancers, and Kabuki actors, lively and lively with the aura and breath of the times when they were active. It exists there. About 130 photographs are no longer just photographs. It is an "unforgettable memory" that has shared time and time with each of us.

The first thing that surprises me at this exhibition is the size of each piece. Feeling nostalgia and greatness in the portrait of John Lennon & Yoko Ono kissing at the entrance, when you step into the venue, you will see each of the large panel photos. It approaches the viewer's eyes. Since the work itself has been published in magazines and photo books by Mr. Shinoyama, there are many familiar photographs, but Mr. Shinoyama himself talks about the feeling of confronting "they" who have become a huge panel again. As you can see, it is not just "appreciation" but "experience" itself. I am overwhelmed by the amount of heat that one photo speaks to.

While feeling the fluffy "unusual" in such a first impression, visitors will proceed through the five rooms (sections) in order. The experience also creates a mysterious feeling. The first is the room of "People who have been registered as GOD demons". Here, there are memorable stars such as John Lennon, Yukio Mishima, Shintaro Katsu, Reiko Ohara, Hibari Misora, who are still active in the hearts of many people. Kinsan Ginsan and Hibari Misora's calm appearance, transparent portrait of Masako Natsume, national filmThe smile of star Atsumi Kiyoshi's "Tora-san" heals her heart, and she is afraid of the radical portrait of Yukio Mishima, who dressed as the martyr St. Sebastian. The dark lighting amplifies the aura unique to a big star.

The theme of the second room, where you open the black curtains, is "STAR, a celebrity known to all." A total of 49 groups of "STARs" are displayed in two corners across the aisle. The lighting in this room is also clear. From the dimly lit "GOD" room, it feels like you're back in the real world at once.

The room of "STAR-1", where small panels (although it is big enough!) Surround the walls on all sides, is from Sadaharu Oh, Masakazu Tamura, and Kazuo Funaki, photographed in 1973, and Kusabue, photographed in 2016. Up to Mitsuko, about 40 years of Japanese entertainment history is condensed. Like the story after the Friday attack in 1986, there are also photographs that make you feel the change of the "era", such as Takeshi Kitano passing in front of Kodansha, which was the scene, and you will never get tired of watching it.

The "STAR-2" room across the aisle will be greeted by a larger panel of seven people, including Ebizo from the Shinnosuke Ichikawa era, Daisuke Miura & Riki Takeuchi, Sayuri Yoshinaga, AKB48, Yu Aoi, and Mitsu Dan. Among them, the photograph of Momoe Yamaguchi, who is lying on a boat by the lake during the popular heyday, evokes intense memories. Among the portrait collections of Kishin Shinoyama, the room that makes you feel the power of "unusual" most is the next room of "SPECTACLE, the world of dreams that takes us to another dimension". The most eye-catching is the coined word "Shinoyama" ("Shinoyama" + "Panorama"), which extends to a width of 9m. So, these are photographs taken by Kishin Shinoyama's original method of projecting a fantastic world in a wide space. The world of fairy tales where many Kumiko Goto exist, Mickey, Minnie and their friends gather under the theme of "holiday", Shinoyama himself became the character "Shinoraman" and infiltrated the east without humansAll the works in this room, such as in the park of Kyo Disneyland, are fantastic. The appearance of the Kabuki actors lined up at the same time during the play also created a different space as if they had traveled back in time to the world of actor paintings in the Edo period.