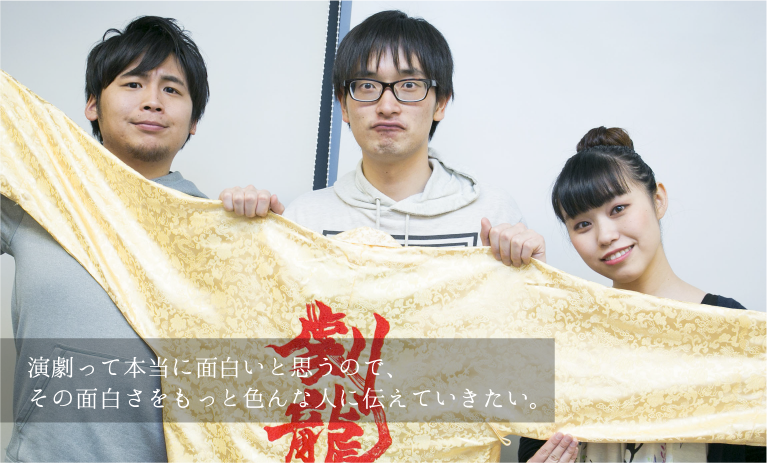 In February, "Theatrical King Tenka Unification Tournament 2015-Bay City Royale! In KAAT-" was held at KAAT Kanagawa Arts Theater, and all 12 groups were selected by qualifying and recommendation from all over the country and fought a fierce theater battle. .. Actor / director LaSalle Ishii, Governor Kuroiwa and other gorgeous judges participated in the judging every day, and in the final, the Kyushu district representative "Mysterious Boy" who won an overwhelming audience vote against the close match judging vote. Got the championship. Starting with a girl who dreams of being a dolphin keeper, the final performance "Scuba" consists of a landscape with the sea and the love of the family surrounding it on various time axes. MACUL.NET was able to talk to the members of "Mysterious Boy" who decided to win after the final.

What is "Theatrical King" !?

A short drama contest that has been raised for 10 years since 2003 by the Japan Playwrights Association Tokai Branch, which was produced by Nagakute City, Aichi Prefecture, as the "Jr. Lightweight Champion Title Match Drama King". Winning or losing is decided by the votes of the spectators and the judges. In February 2013, champions from all over the country from Hokkaido to Kyushu gathered at the "Drama King X ~ Unification Tournament ~" held to commemorate the 10th anniversary. Successive drama kings also participated and a big decisive battle was fought. There, Yukio Shiba (Mamagoto), the 4th drama king, won the championship. He won the title of "Gekiten", the world of theater. With this, the event in Nagakute was temporarily suspended, but "Theatrical King" has been held independently in various parts of Japan. Then, in February 2015, a new world unification tournament was held at the KAAT Kanagawa Arts Theater under the auspices of Kanagawa Prefecture, and the winning Kyushu district representative, Asahi Hiroshi Osako (mysterious boy) won the title of "Dragon King". ..

Judging after the final match

--- Congratulations on winning this time! I think Mr. Osako, the director, also got the title of "Dragon King" and feels great. Could you tell us your impressions of participating from Kyushu this time?

Osako: I hadn't really left Kyushu so much, so I was confident that I was making something interesting, but I was worried that our work would be transmitted nationwide. .. However, in a place where the most interesting plays from all over the country gather and compete like this "Drama King", I'm really happy that I was able to penetrate what I found interesting and be recognized. I heard that Japan was known as the "Drama King" ... I still don't know much about it, but I was really happy not only that I won the championship but also that I was involved with people from all over the world by participating.

e = "color: # 00ccff"> --- It seems that the work "Scuba" that won the championship this time has been performed several times in Kyushu, but it is important as the reason for creating this work and as a "mysterious boy". Please let me know if there is anything that has been done.

Osako: There is a movie called "Big Fish," but my father, who has a short life expectancy, talks to his son about half a lifetime, and the story goes on from there, so I wanted to write that story as well. It was a chance. Music also plays an important role in this work, so I listened to the music and solidified the image of the story from there.

Morioka: It seems that there was an idea like "let's write a story about the family" inspired by the movie, but this composition (theatrical king rule) was previously made in Kyushu as "drama totsu x 20 minutes". There was a tournament where the right to participate in the "Drama King" was awarded, and at that time we were disappointed that our rivals won the championship, and the composition was based on the idea "Let's make a work for the Drama King too!" I heard directly from Mr. Osako that it was solidified (laughs).

Osako: Oh, that's right. There is also that (laughs).

Morioka: I've been doing this work for many years, and I felt like a dead end in ourselves, so the judgesIt was very encouraging to receive various comments from each of us, saying, "I can still do this story." I was also really happy that there were many votes from customers. The mysterious boy has the theme of "laughter, sadness and rediscovery", and the actors share the rediscovery of Mr. Osako as a writer in the same way, and build it with the customers. It seems like you'll notice. I was able to sympathize with the customers because I was able to make use of those parts that were the same as usual this time. That's right? Utsunomiya-san!

Morioka: By the way, Mr. Utsunomiya is a guest from another theater company, and he always appears in "Scuba". Of course, Utsunomiya always plays the roles of father and sea lion. --- Finally, could you please comment on your future aspirations as a winner, or for future "Drama King" participants one by one?

Utsunomiya: It's been about two years since I first met Mr. Osako, but since I first participated in "Scuba" at "Drama Totsu" held in Kitakyushu a year ago, I've been able to appear in other works since then. I have you. I feel that my acting and way of life match Mr. Osako's work.It's a pleasant affinity, I haven't had a hard time practicing a mysterious boy. That's why I want to continue working together, and even when I return to Kyushu, I'd like to do my best so that I can play an active role on the national stage like this time.

Osako: There was a time when I was working in what is called a "region" and had the image that "a lot of things are gathering and glittering in Tokyo." I was wondering if I had to go to Tokyo, Osaka or Fukuoka to work all the time, but I don't think that's the case at all. I'm sure there are expressions that come from that land, and I want people who live in that land to be proud. And I want to strongly say, "Let's meet again with that expression!"

Morioka: This time, I came from Kyushu with a burning spirit, saying, "There are 11 enemies," but when I opened the lid, all of them really liked theater, and people who had won the region in the same way. So rather than having more enemies, I was happy to have a lot of allies. I think the real thrill of these contests is that you can experience things like "I was disappointed, but please do your best" or that the land was different but you were connected with feelings. If there is a theater company smoldering "I want to go out" somewhere now, I want to say "Come on!" (Laughs). I really want you to get together. I will definitely meet again someday.

Osako: I think theater is really interesting, so I would like to convey the fun to more people. I will do my best to climb higher as "Dragon King", so please support me! !!

---Thank you for your time today! We look forward to your future success! !!