Leave your summer vacation homework to us! A museum where you can meet Kanagawa by knowing the earth

The world of art that you can go, see, and feel
File.3 Kanagawa Prefectural Museum of Life and Earth

It has been 4.6 billion years since the birth of the Earth, the star of life. A museum where you can learn about the history and biodiversity in an easy-to-understand manner along with the passage of time. There are about 10,000 full-scale specimens, from giant dinosaurs to meteorites and insects as large as beans. The story-like exhibition is fun just to look at, but be aware that it is so fulfilling that it will take a whole day if you take a closer look.
Whether you like geology, space, animals, insects, plants, or fish, you have to go. Anyway GO! 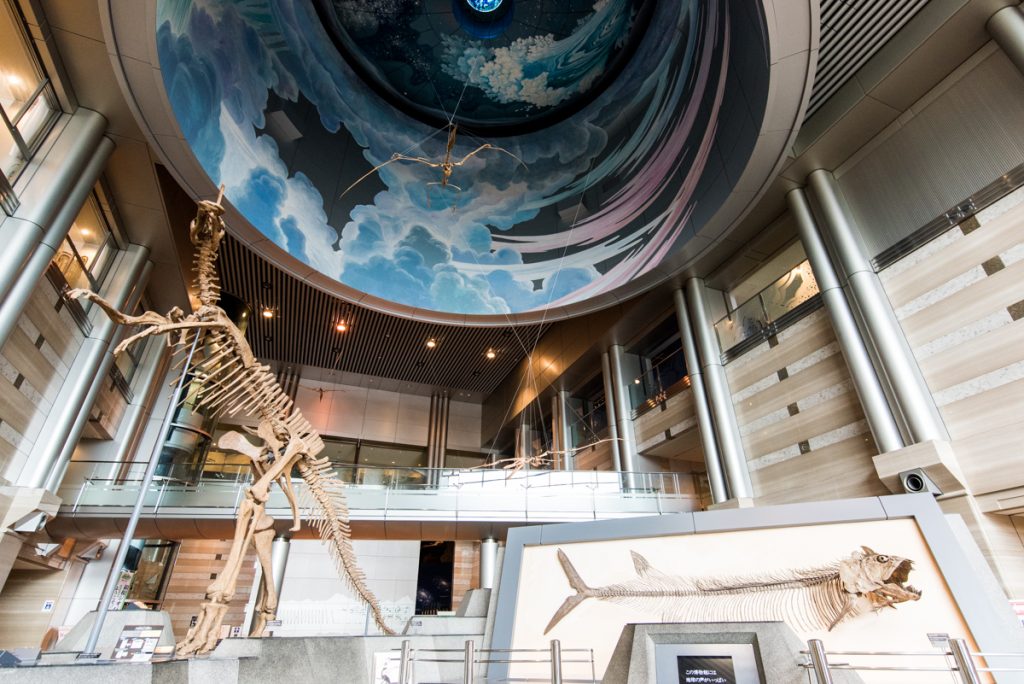 A vast universe on the ceiling of the entrance. Below that, fossils of life that have carved history in various spaces on the earth, such as the sky, land, and sea, are lined up and welcomed. 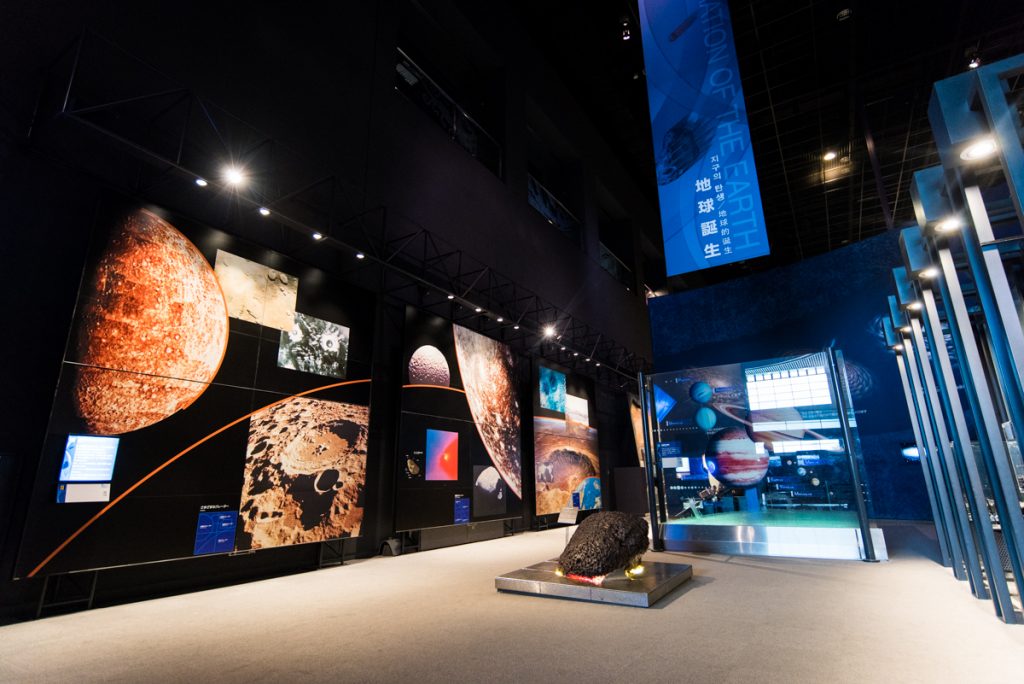 The first theme on the first floor is "thinking about the earth."
No one has seen the moment when the earth was born, so it is flying from space that is used to solve the mystery.It's a meteorite. By connecting fragmentary information extracted from various stones, the image of Creation will be expanded.
The romance of scientists is amazing. 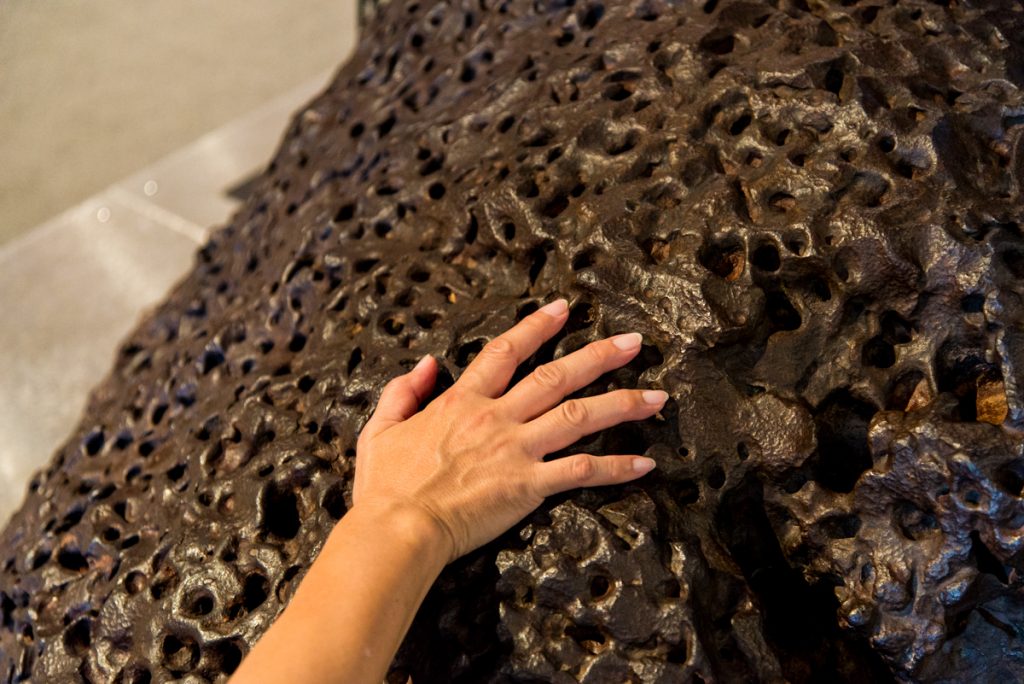 The "Mundrabilla meteorite" that fell in Australia is placed with Dawn in the center. It's 2.5 tons, and of course it's real. The ingredients are almost iron, so when you smell the touched hands, it certainly smells a little rusty.
At the museum, you can touch the exhibits except those that are in cases or covered with fences. Let's think about the history of the earth and life by mobilizing all five senses, such as the sense of touch and the sense of smell, which cannot be conveyed by online images. 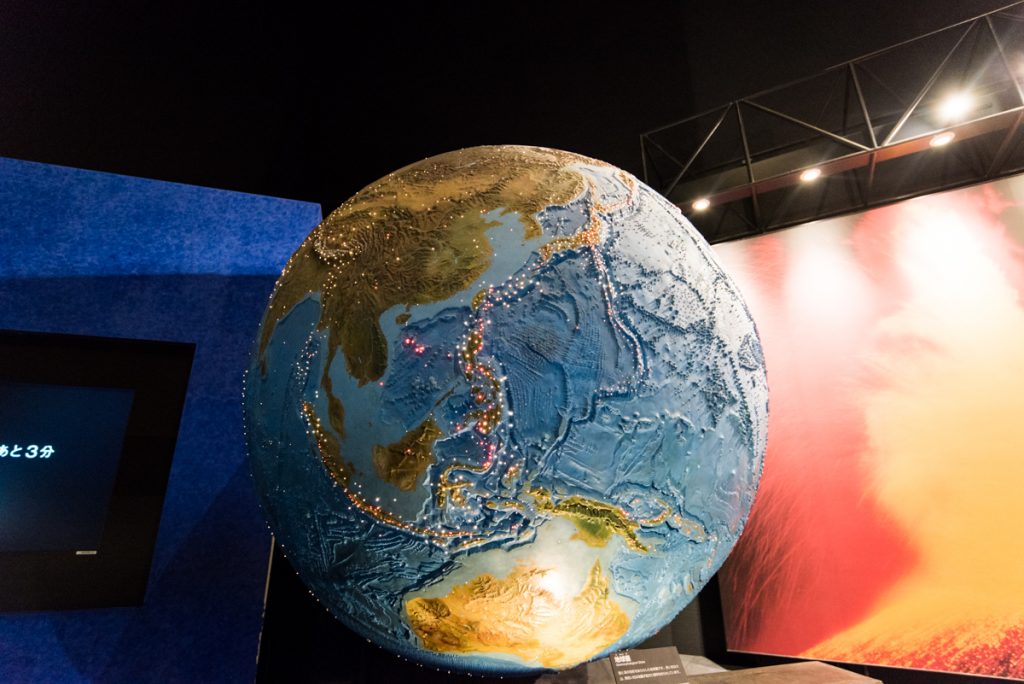 This is a globe that displays the epicenter and volcano of the earthquake with white and red light bulbs, respectively. Light bulbs are rarely lit in areas where ancient civilizations flourished, such as Africa and the Middle East, or where Western cities are concentrated. On the contrary, the Japanese archipelago is filled with red and white light bulbs so that the shadow of the island cannot be seen. It may be miraculous that a state-of-the-art city develops on such unstable ground. 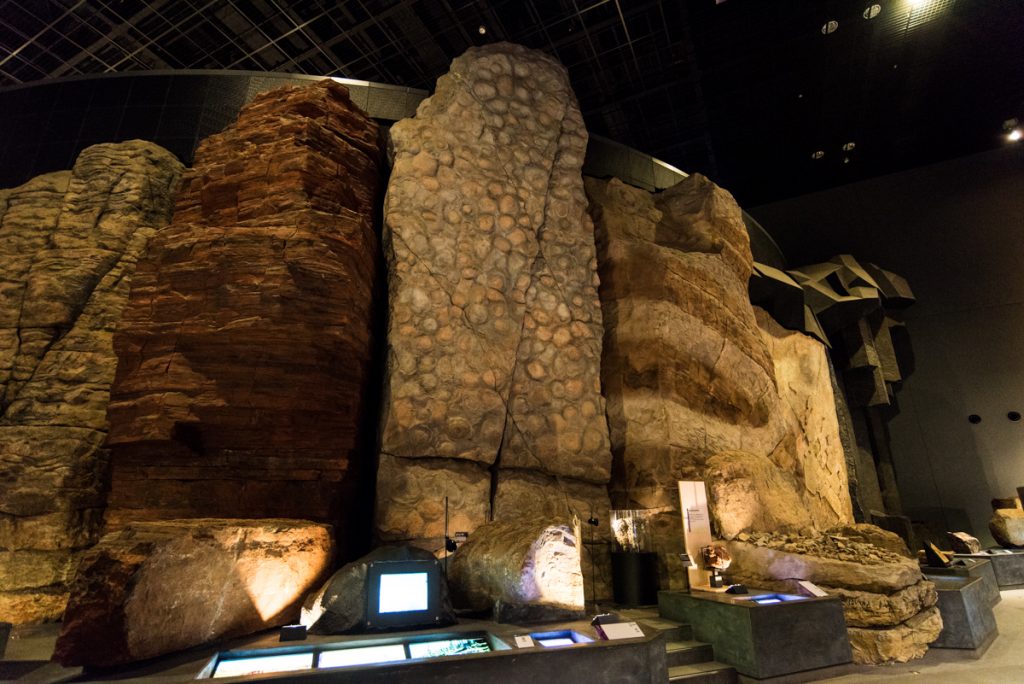 The second theme is "thinking about life."

Bacteria, which can be said to be the origin of life, were born on the earth about 2 billion years ago. It seems that it will take more than 1.5 billion years before trilobites appear from there.
And 100 million years ago, the familiar "ammonite" appears. Of course, this stratum is also genuine. When I looked for it, I heard that nautilus, bivalve molluscs, and snail ancestors were also hidden.
The parts that can be reached are polished and glossy by everyone's hands. It can be said that it is a trace of a treasure hunt. 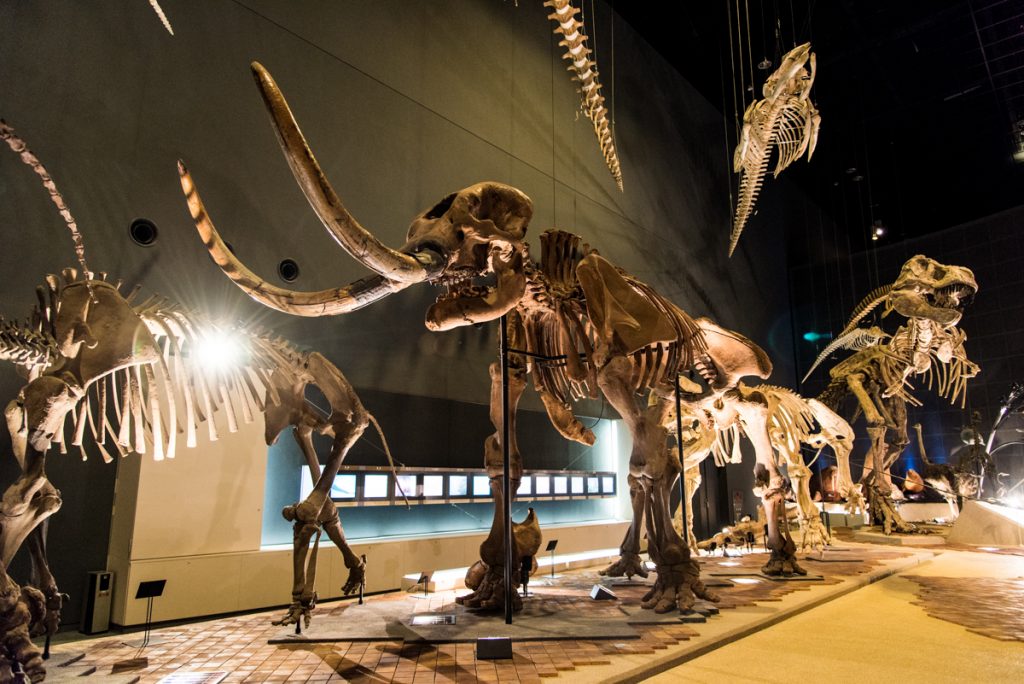 The process of aquatic life rising to land and evolving into amphibians and reptiles is also on display.

But after all, it is the fossils of large beasts that make you feel excited. Dinosaurs and elephant companions (such as mammoths) have an overwhelming presence in the large hall. 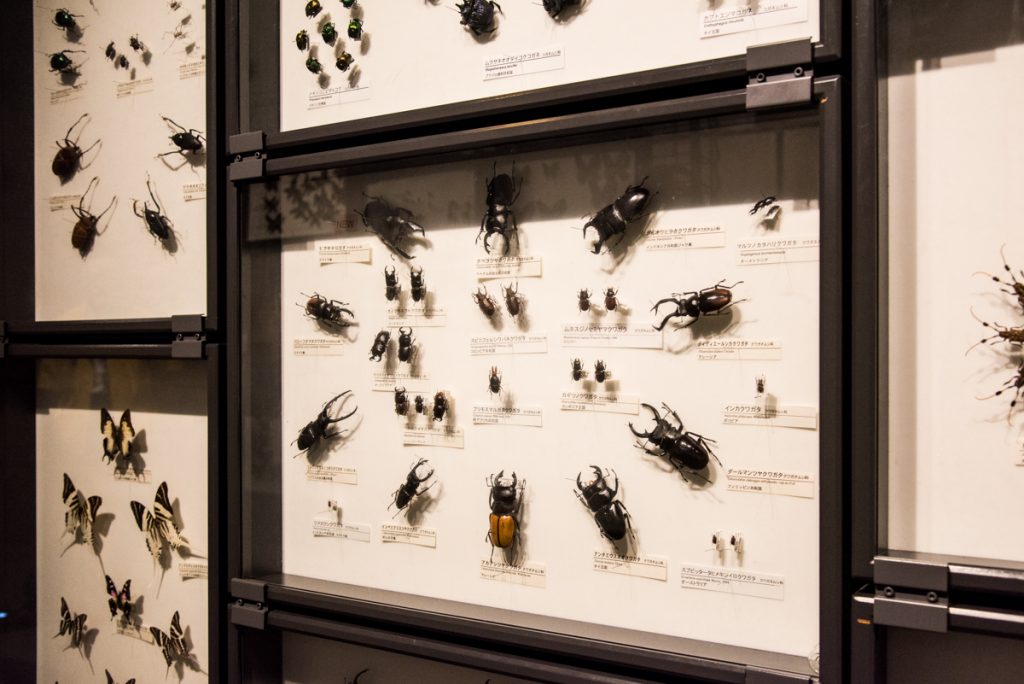 An extensive collection that is irresistible for insect lovers. I'm sorry for the idea from a human point of view, but the shape of insects is really strange and strange.
No, of course, they are all valuable natural history materials.
jpg "alt =" "width =" 1024 "height =" 684 "/>

Just as dinosaurs are extinct, mammals adapted to different environments are expanding their power on Earth. About 6500 years ago is "just recently" in the history of the earth.
Here, representative creatures are selected from all the "eyes" of mammals and displayed in stuffed animals. It's a little strange to think about the sight of animals that you wouldn't normally meet, lined up like friends (?). That's the difference from the zoo, but what's really amazing is that you can take a closer look at it so close that you can stab your nose. The sharp teeth of carnivorous animals and the size of brown bears can be felt realistically when viewed up close. 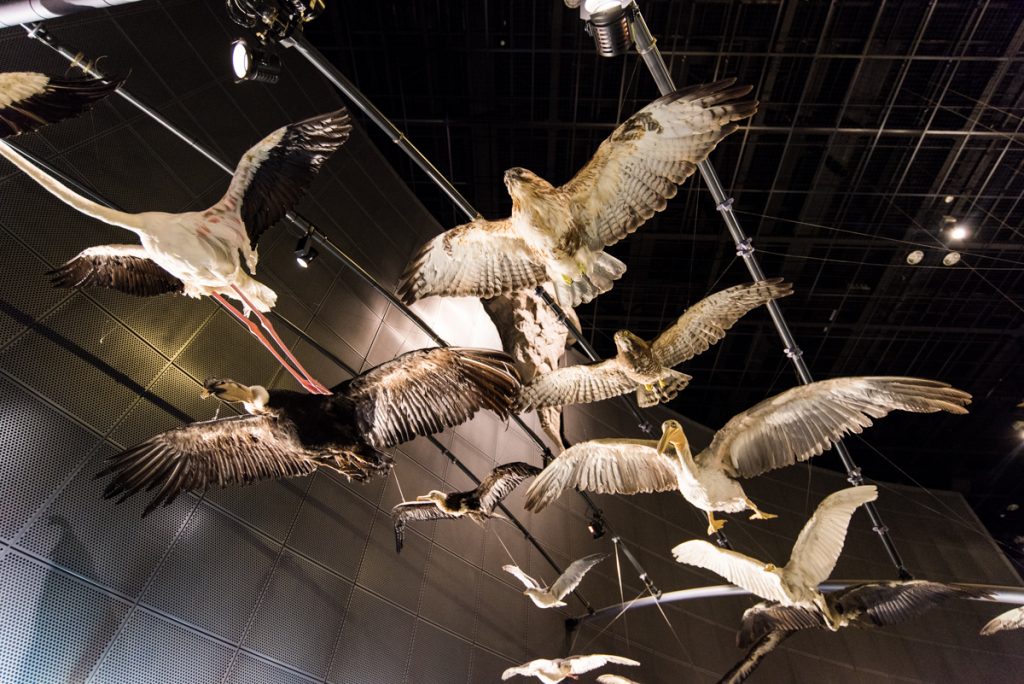 A group of birds are flying over the hall.
If you look closely, the waterfowl is also flying properly. 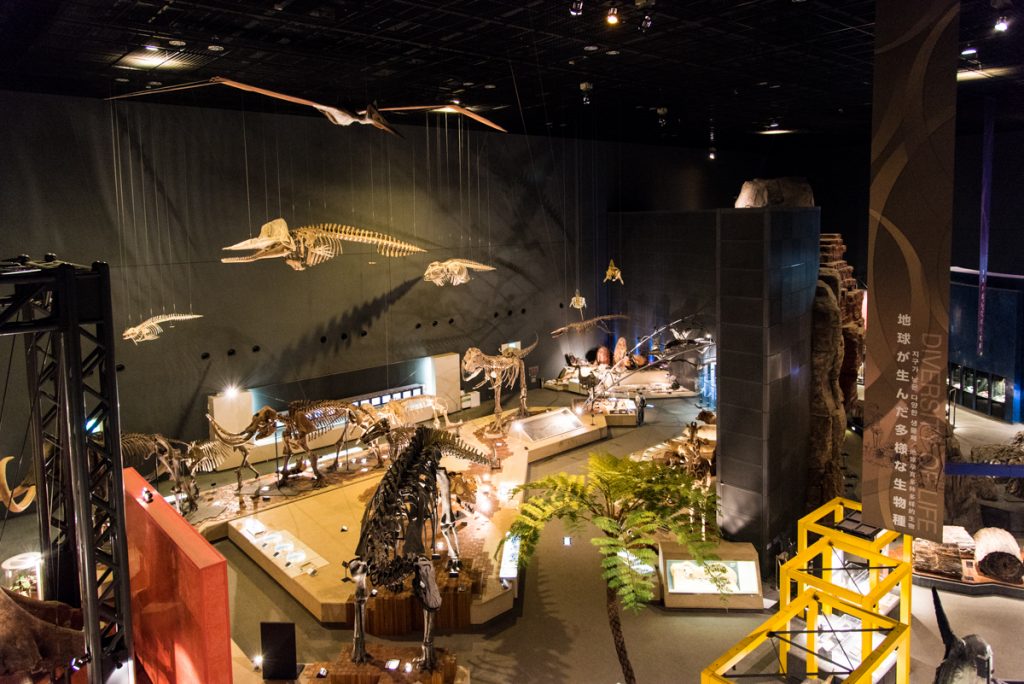 Looking down on the hall on the first floor from the escalator that rises upstairs, I feel like a bird.
"Mammoth eye height" and "Tyrannosaurus eye height" are pointed to the side of the escalator, so check them out as well.
However, please note that the escalator cannot stop at that position. 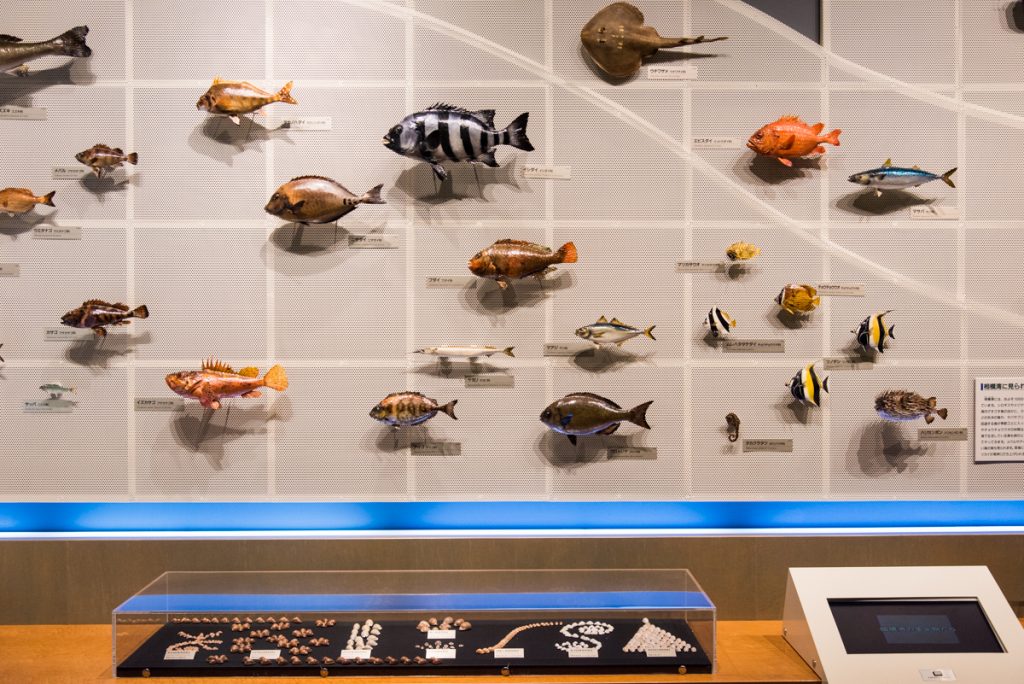 The first theme on the 3rd floor is "Thinking about the nature of Kanagawa".
Let's examine from a local perspective how the land we live in was formed and what kind of flora and fauna and marine life have been nurtured. Kanagawa seems to have a variety of vegetation because it is located on the point where three of the four plates on which the Japanese archipelago rests collide. In addition, Sagami Bay, which is famous for its overwhelming water depth, is said to be home to abundant fish species that overwhelm other areas in Japan.
I was happy to imagine the menu of a sushi restaurant rather than a natural history. 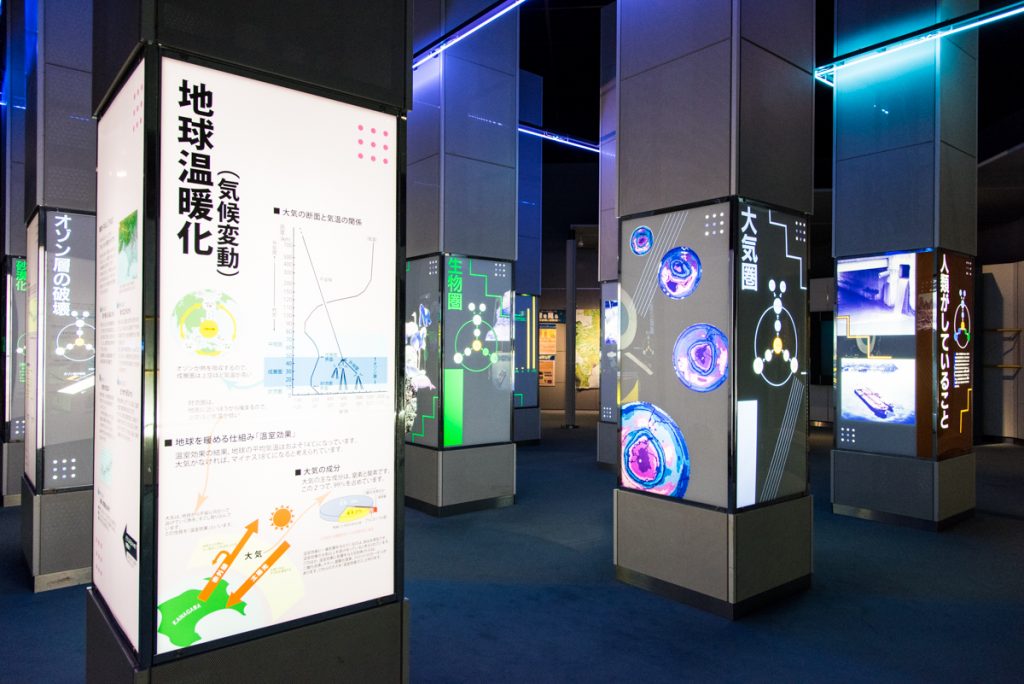 The final theme is "Thinking about coexistence with nature-the present and future of humankind."
In the natural world, substances have been circulated between the atmosphere, water, the surface of the earth, and living things, and the balance has been maintained. In recent years, the activities of human beings, which are just one of the lives on the earth, have greatly influenced this balance.
From here, the data exhibition will be the main focus, not the easy-to-understand specimens and models. It may be a little difficult, but I'd like to stop for a short time and think about the meaning of the data. 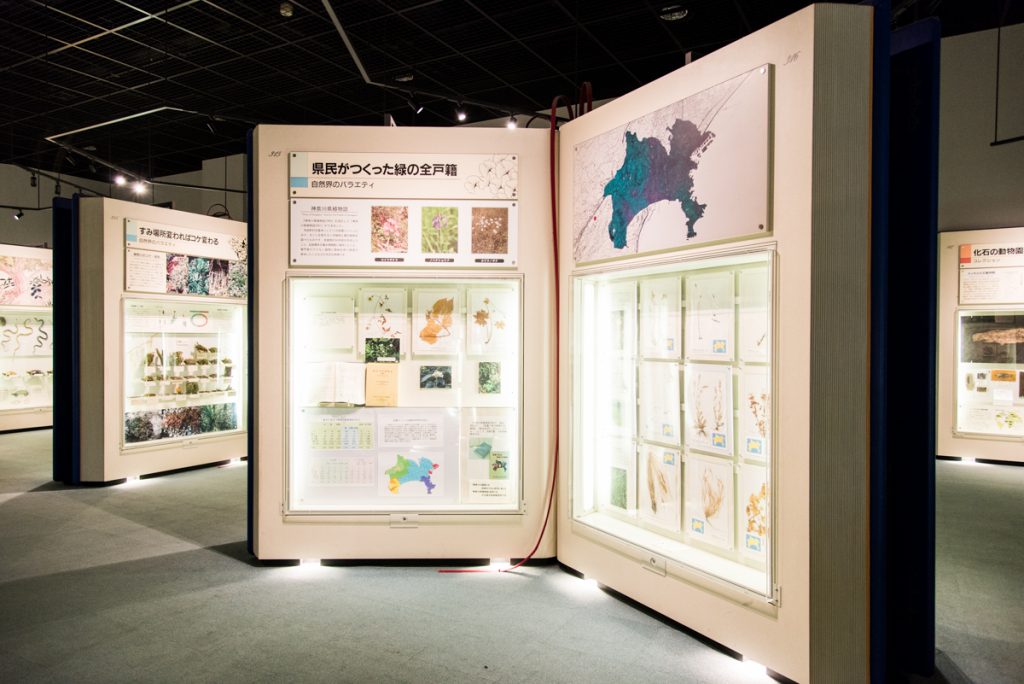 The last is "Jumbo Book Exhibition Room".
There are 27 books of 3D encyclopedias with a height of 3.2 meters that are full of real specimens. Since the exhibits can be changed one by one, it is possible to develop with a high degree of freedom according to the season and current affairs. Since the world of science is always full of new discoveries, there is also such a mobile exhibition corner.
x684.jpg "alt =" "width =" 1024 "height =" 684 "/>

When you go down the stairs to the second floor, there is a library with books related to nature.
During the summer vacation (until August 19, 2018), a learning instructor is stationed to give advice to children on independent research in the field of science. Once the research theme is decided, the museum curator will help you with how to search and organize more detailed information, so feel free to contact us first.
Once you have an interesting report, apply for the Museum-sponsored "Children's Natural Sciences Exhibition" !

A special exhibition is being held!

In 1988, the "Green Family Register" compiled by the efforts of the general public living in Kanagawa Prefecture was announced for the first time in Japan. A special exhibition is being held in conjunction with the announcement of the second revised edition following the 2001 revision.
It introduces what we learned from the latest research, how we have investigated local plants, and efforts to connect the past and the future.