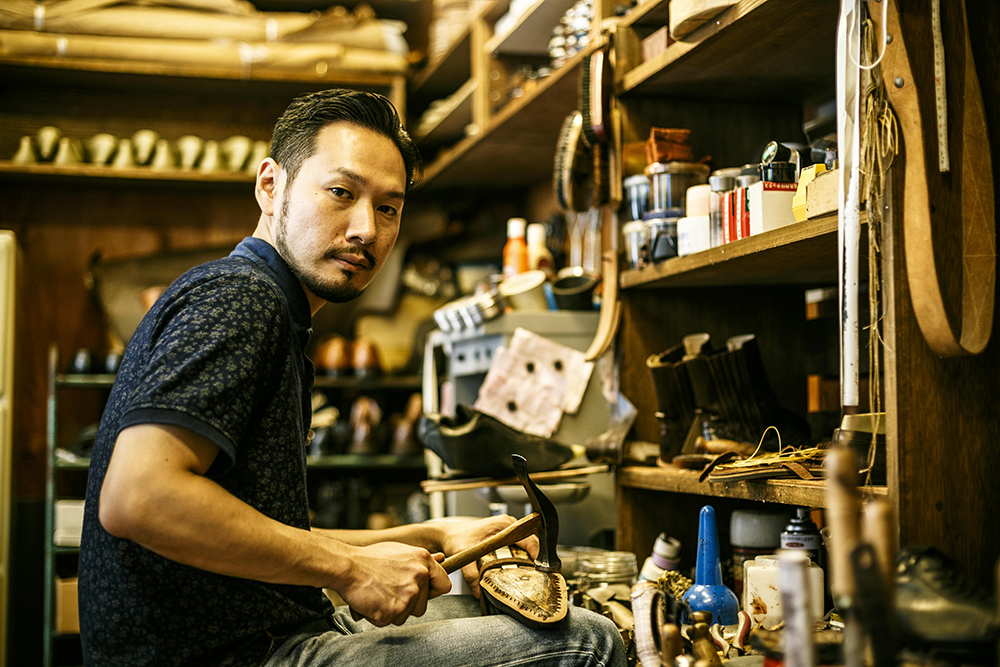 Hudson shoe store
(Please note that this page was created using Google's automatic translation service and understand that because of this, its translation may not necessarily be accurate.)

Carefully, carefully and with all your thoughts.
A corner that introduces manufacturing sites that make use of handicrafts.
This time, I can't repair it at other stores from all over the world.
"Rejected" shoes gather,
It can be said that it is the savior of the shoe world.
Go to the shoe repair workshop "Hudson Shoe Store". 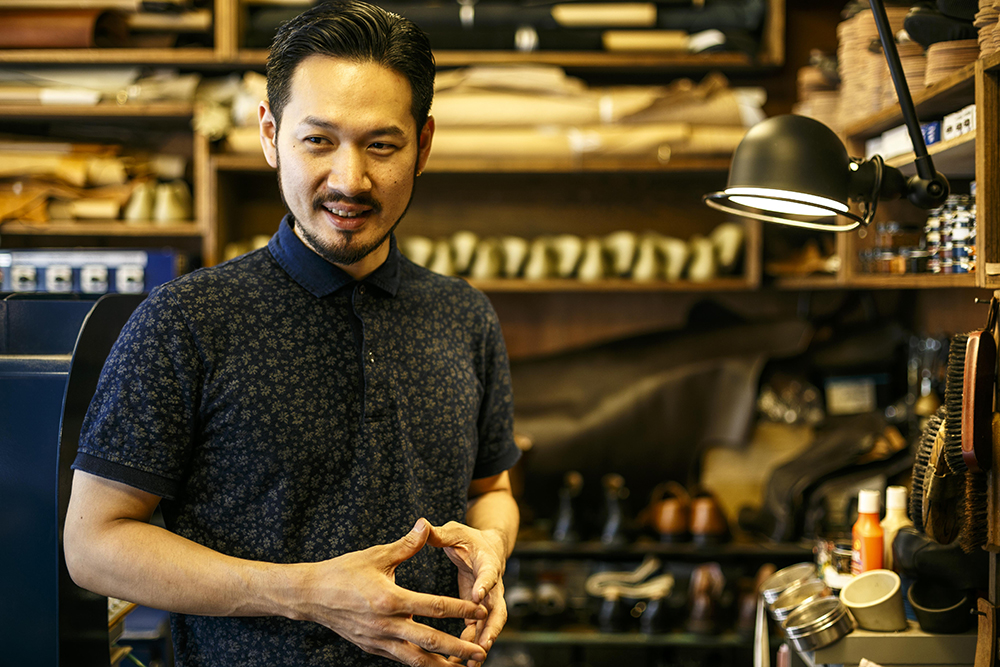 Mr. Murakami, who inherited the thoughts of his predecessor, who was said to be the last handmade shoemaker in Yokohama, became the second generation of "Hudson Shoe Store" seven years ago. Shoes waiting for repair are lined up on the shelves in the workshop, and around them are a lot of shoe tools such as leather knives and crocodiles. Mr. Murakami learned most of the minor repairs on his own while stealing technology by watching the movements of his predecessor. "I sharpen the leather knives myself, and adjust the needles and threads to match the shoes," he said. Hudson's style is to spend a lot of time there, deciding that "we will hold pre-meetings until the customer is satisfied because it is important to listen carefully to the customer's thoughts and requests for shoes." “Shoe repair shop with many meetings”… Affection for shoesIs forever deep. 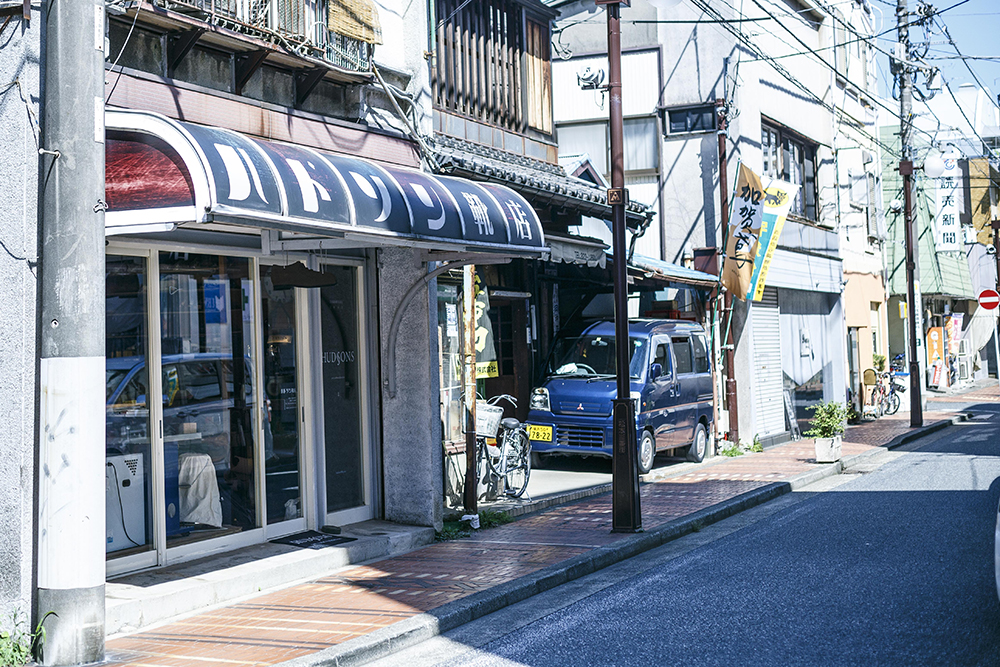 "In a niche place in Yokohama," Murakami says, "Hudson Shoe Store" is located in a corner of Matsumoto 3-chome shopping street, a 5-minute walk from "Tammachi Station" on the Tokyu Toyoko Line. In 1961 (Showa 36), the predecessor Masatoshi Sato, who has worked on the shoe making of many celebrities including former Prime Minister Shigeru Yoshida, opened a store and this year is 56 years. "It seems that the people in the Shutter shopping district didn't even know that there was such a great shoemaker in this place. No way, there was a person here who made shoes for the Japanese prime minister to wear." "Hudson Shoe Store" had been shuttered for about a year after its predecessor passed away, but Murakami took over seven years ago. 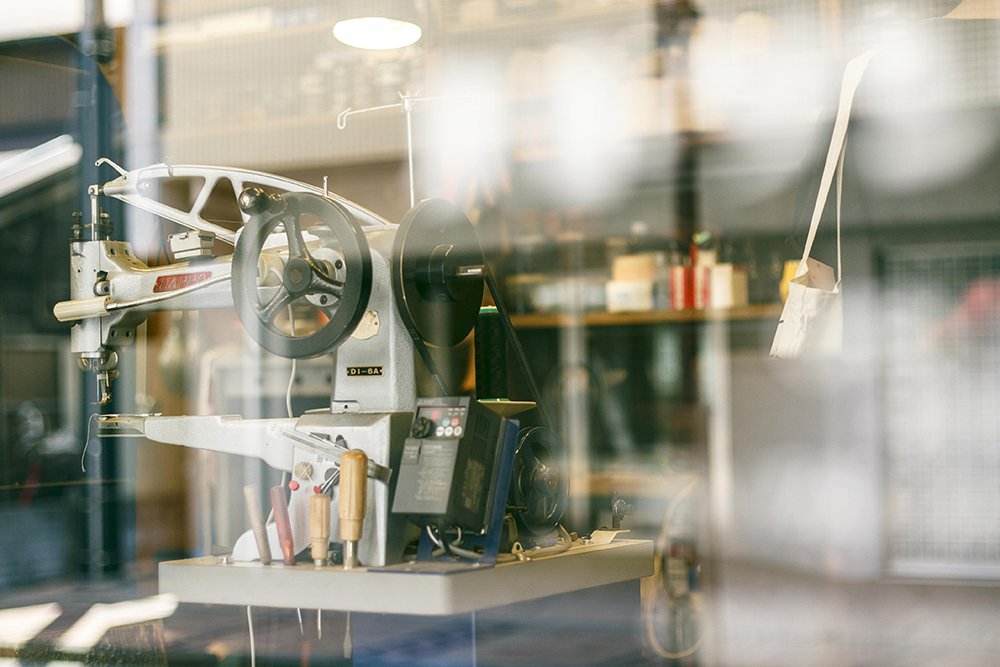 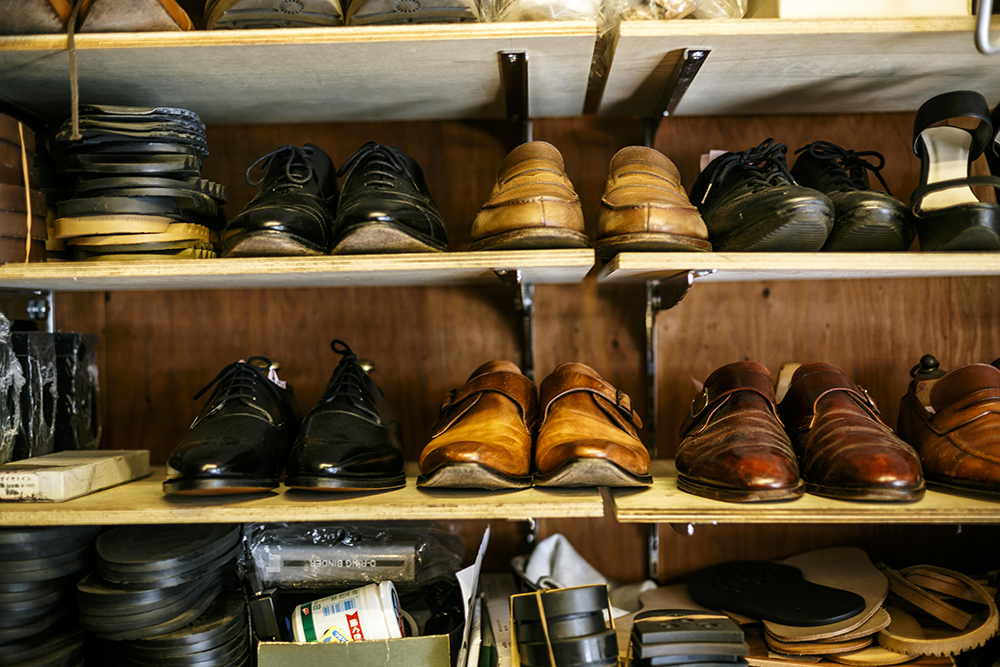 As I wrote at the beginning, shoes that have been refused all over the country are gathered here. At franchise shoe repair shops that are increasing in the city, shoes that are said to be unable to handle due to difficult repairs are brought in through word of mouth and the Internet. Mr. Murakami's reputation as a shoemaker seems to be spreading overseas, and it seems that shoes have been sent from Belgium the other day across the sea. 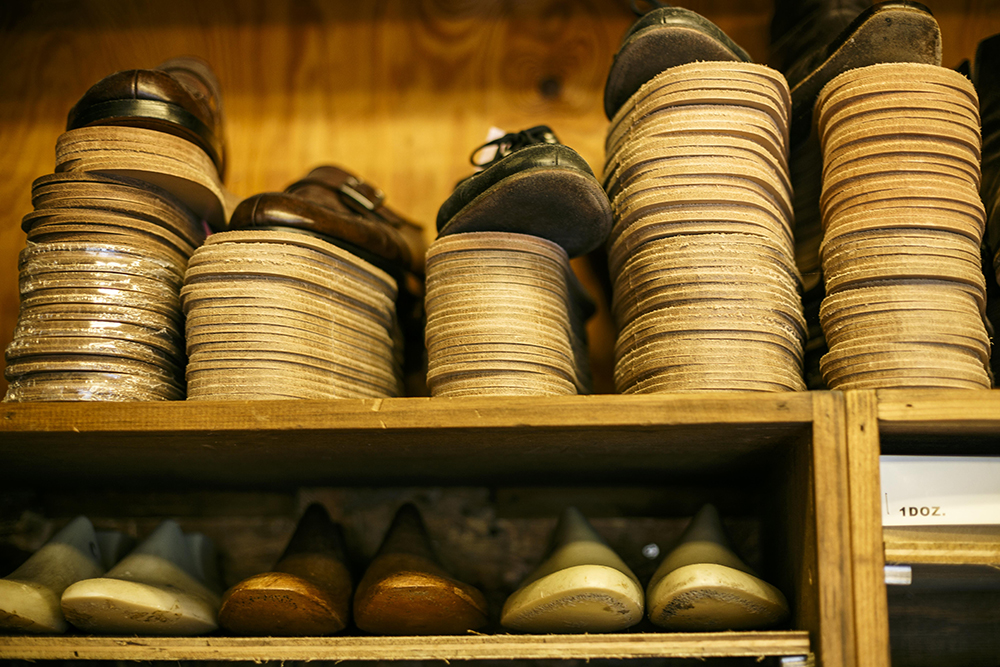 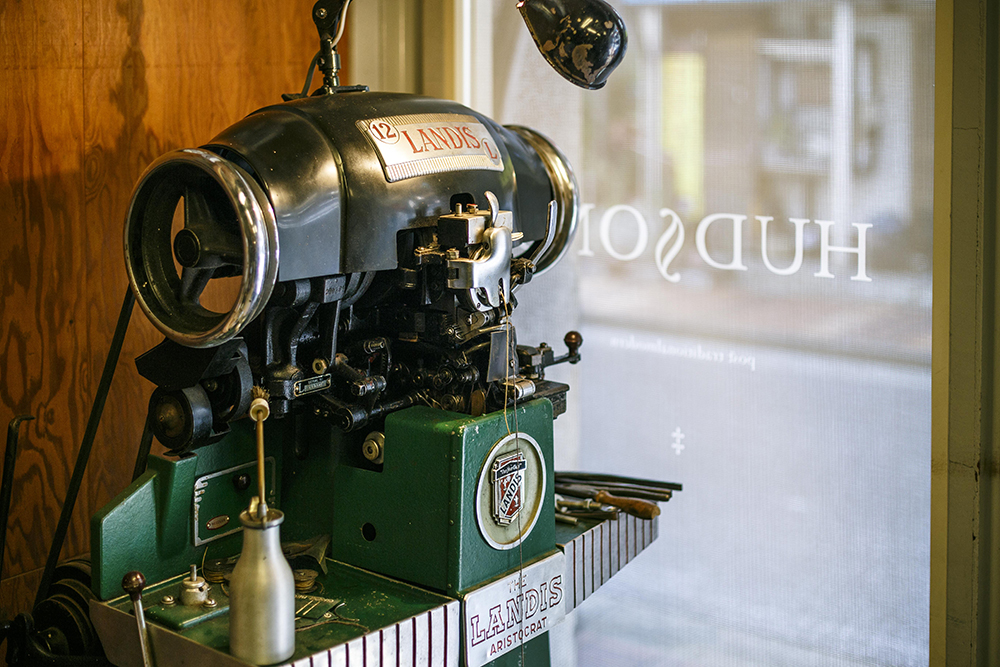 "Hudson Shoe Store" shoe repair begins with a long "reception". Especially for first-time customers, it takes 2 to 3 hours for a pair of shoes. "Of course, the technology is of course, but I took the trouble to look it up on the Internet etc. and arrived at our shop, so I think it is natural for the customer to take care of the repair. Initially, the people around me wasted time. Some people were worried that they would reduce their earnings (laughs). I decided to spend all my time on reception until the customer was satisfied. For example, the time will gradually decrease from the next time. " 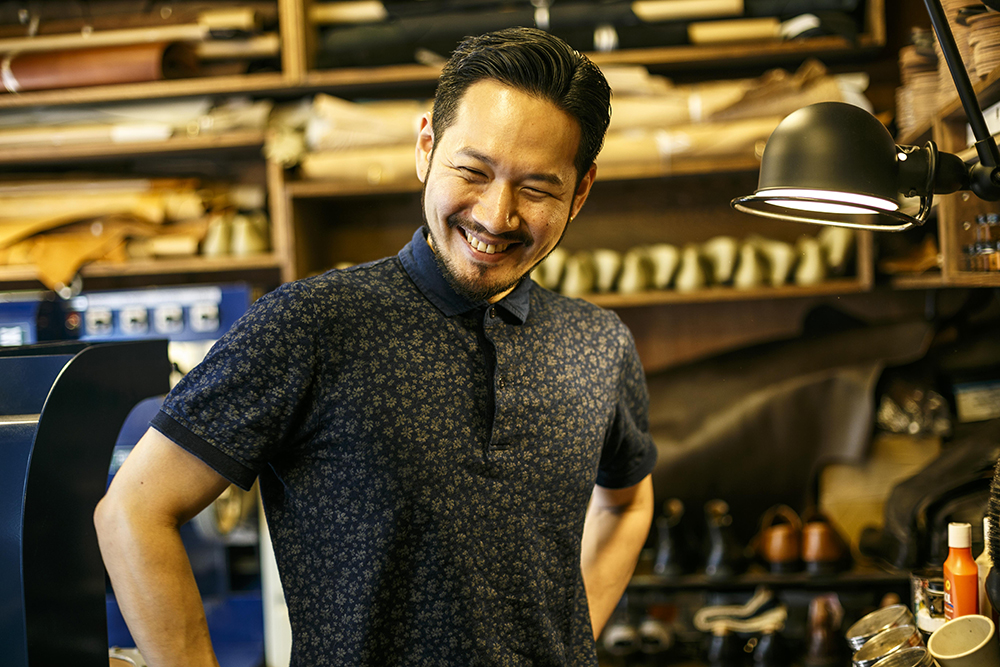 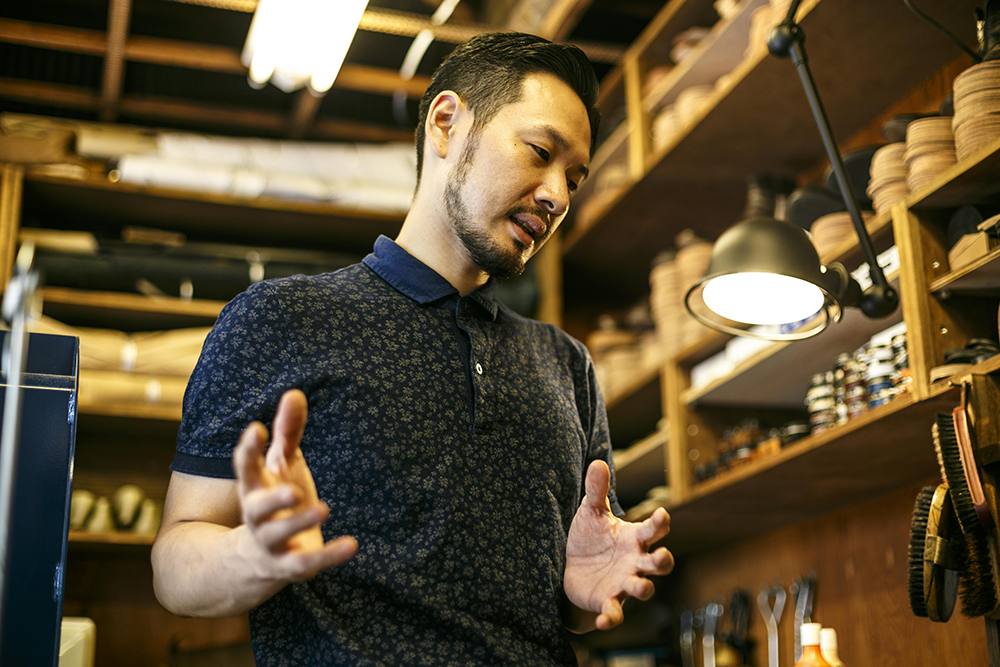 "My commitment is to repair as if I were making shoes. It's not a" repair "but a" remake "." In front of the shoes to be remade, the "dialogue with the shoes" begins here. In front of me are the shoes that were brought in at another store. How is it best to remake this? What materials to use, what tools to use, what process to proceed with ... Anyway, "I spend a lot of time looking at my shoes."

For example here. Leather sandals that I was about to start at the time of the interview. 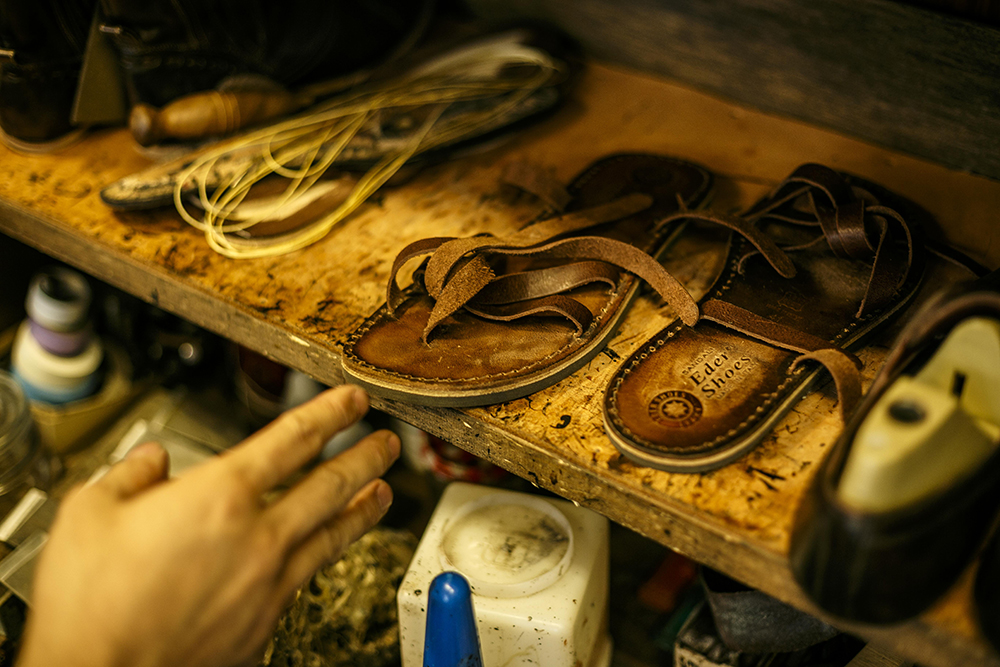 I looked at the sandals for a while, picked them up, put them on the work table, looked at them again, stared at the tools, and the silence continued. And finally the repair method was decided. 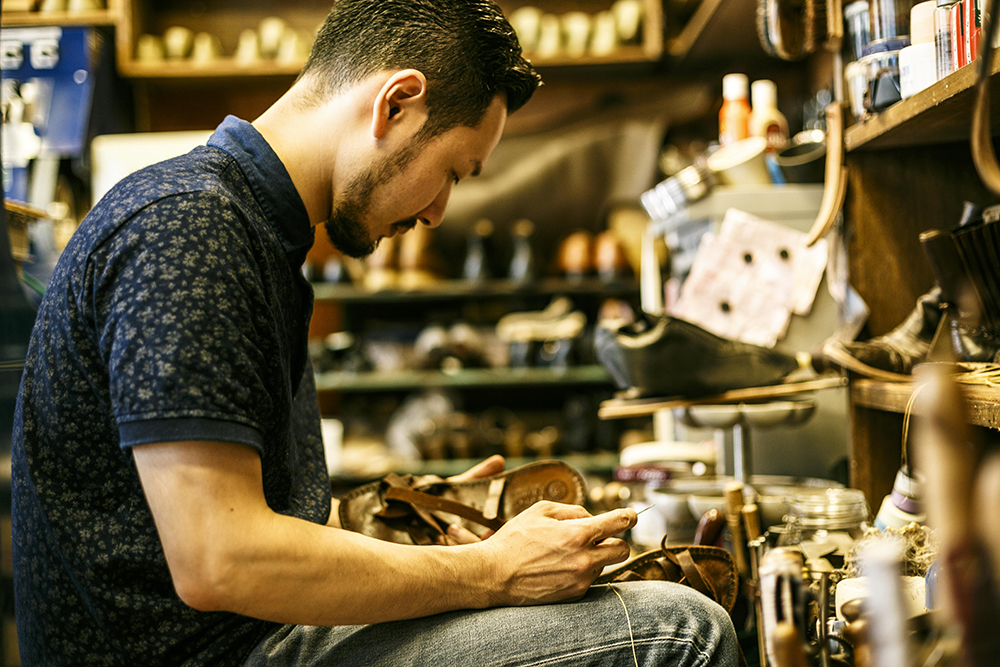 "This sandal has leather on the front, but the back is made of rubber. So even if you make a hole with normal perforations, the rubber will close immediately. I'm worried about how to solve it.I was doing it. " Even though I could see how to proceed, it seems that I will continue to try and try while checking the condition of the shoes from here. 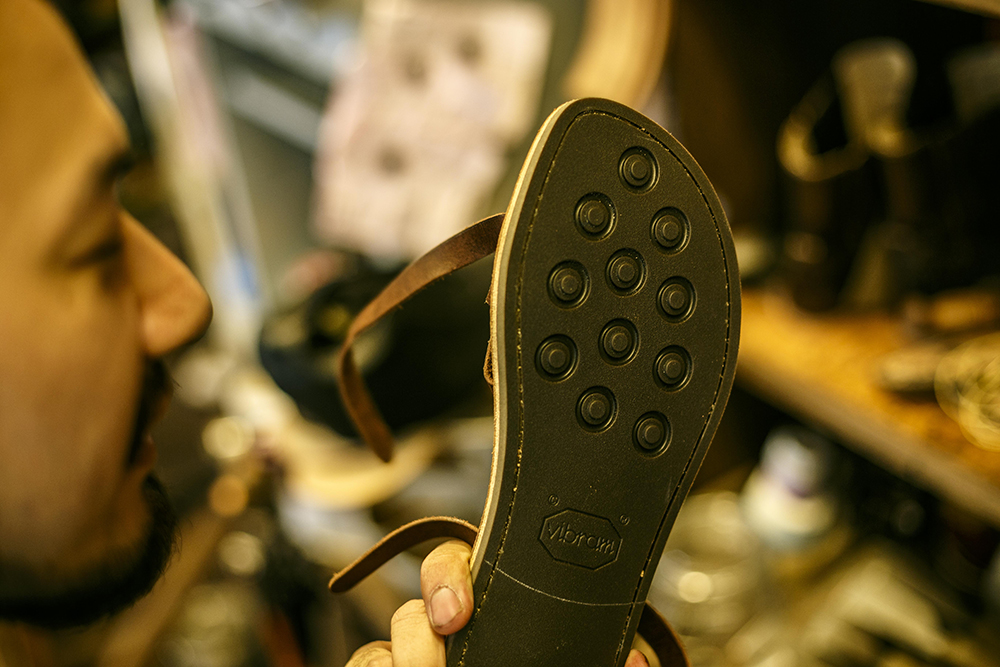 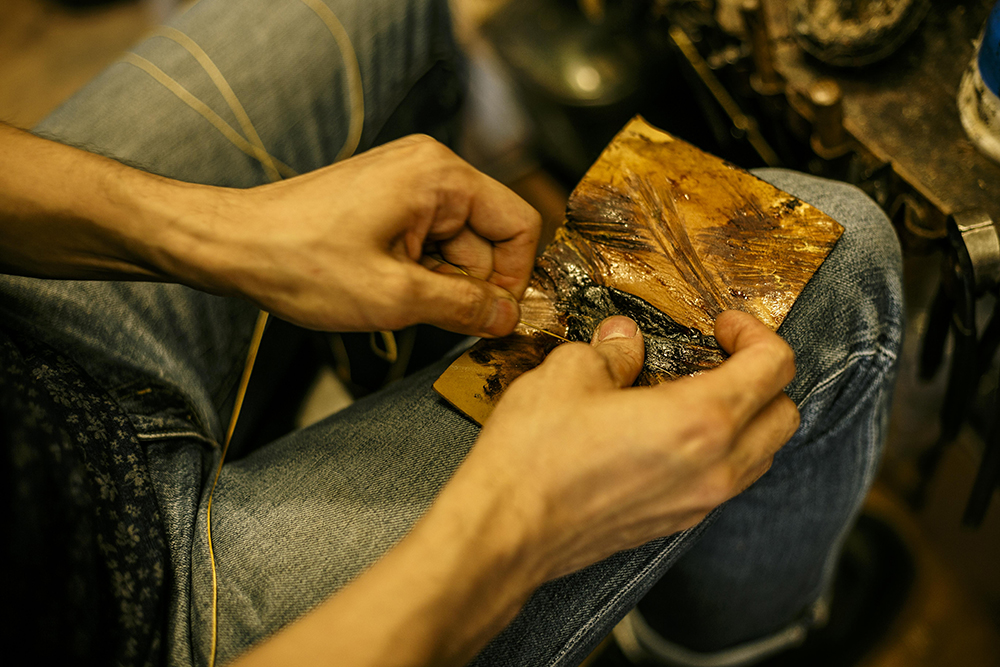 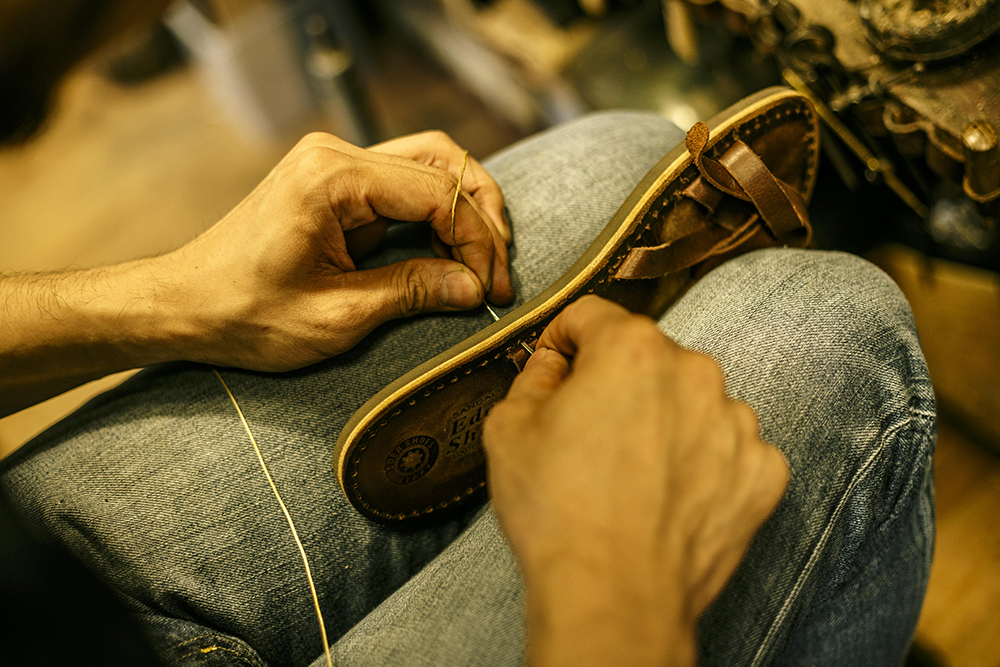 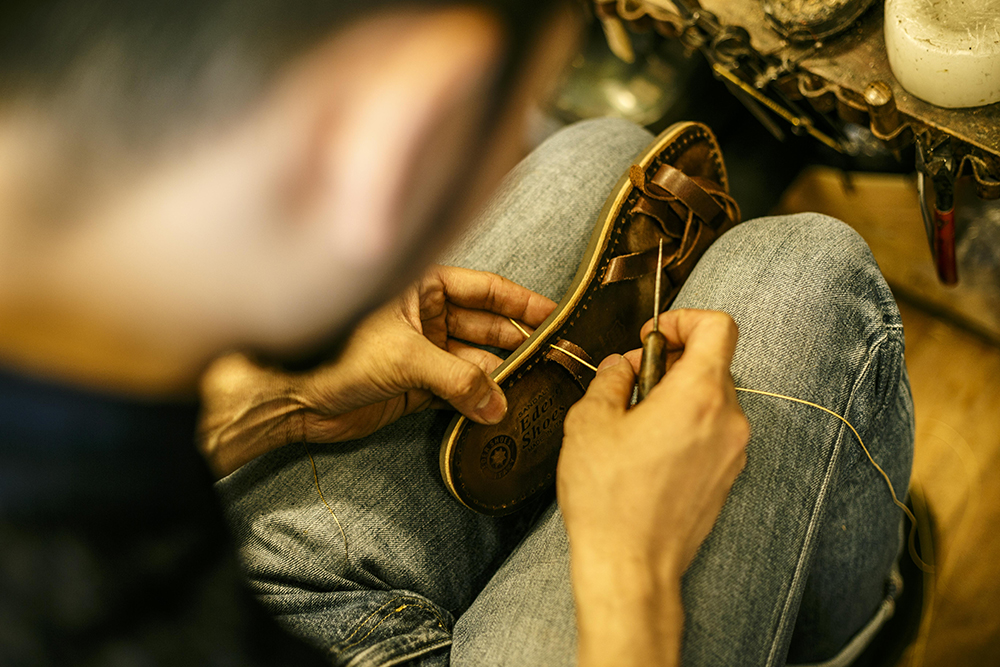 Mr. Murakami. It seems that it does not respond to any order. "I don't want to repair until the atmosphere of the shoes is destroyed. I'm originally a professional manufacturer, so I can only understand how many craftsmen make the shoes and what kind of thoughts they make, so repairs like a burning blade I'm sorry, but I may decline if I really can't accept it. " I think that's because I'm seriously facing shoes.
N_MG_4812.jpg "alt =" "width =" 1000 "height =" 667 "/>

If you've been to the Hudson Shoe Store, you'll also notice the beauty of the tools Murakami uses. For example, this leather knife. 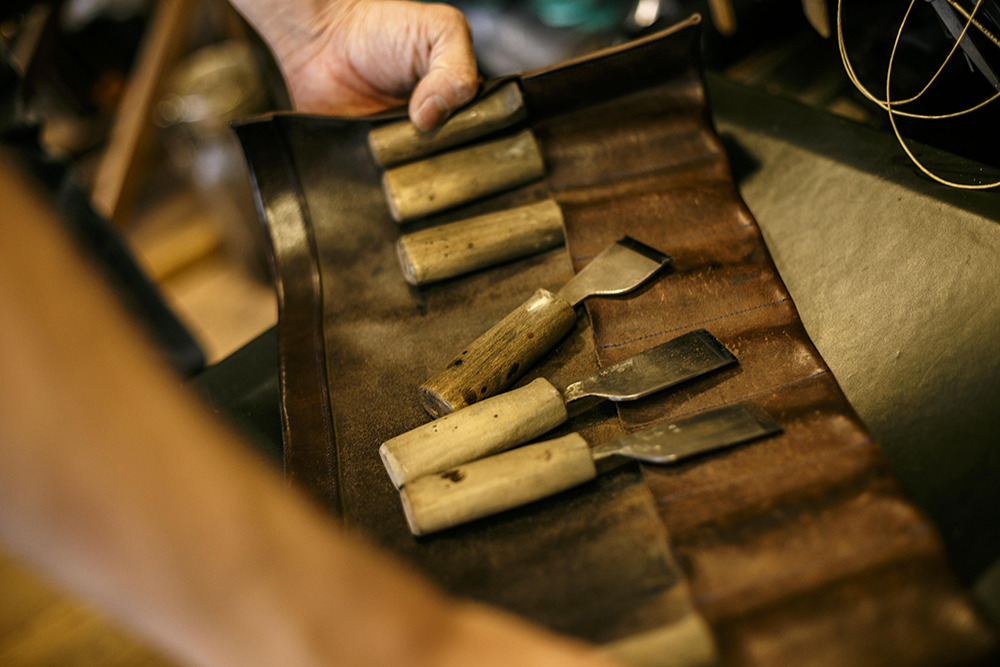 "Tools are life for craftsmen. I actually visited a sharpener in Asakusa, learned how to sharpen with a whetstone, and sharpened the blade myself. To sharpen this leather knife by myself. It is said that shoemakers will start after they can do it. That kind of foundation is important for shoe repair. " 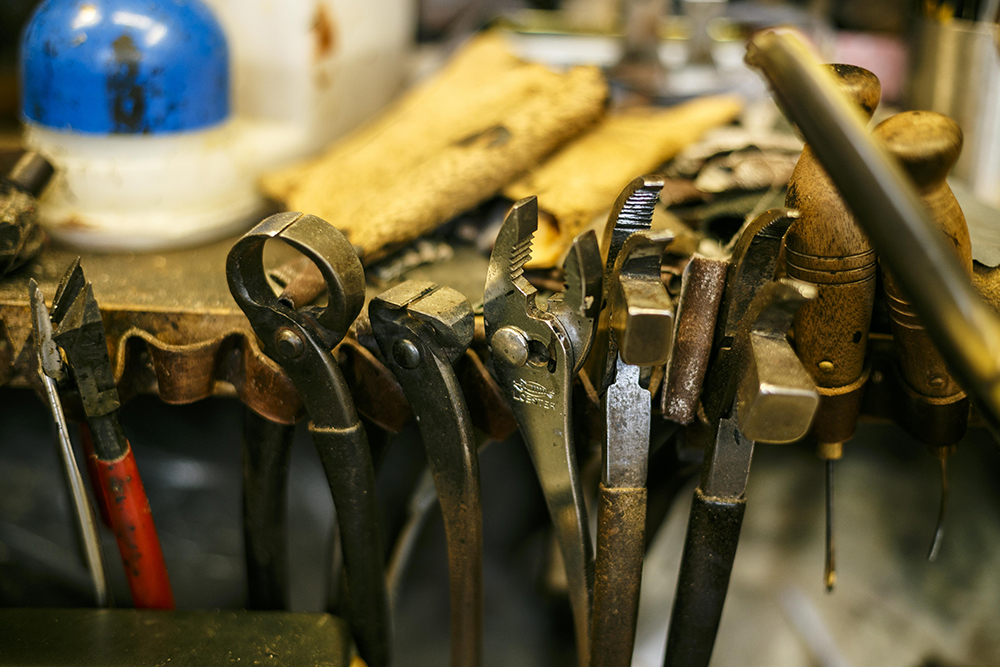 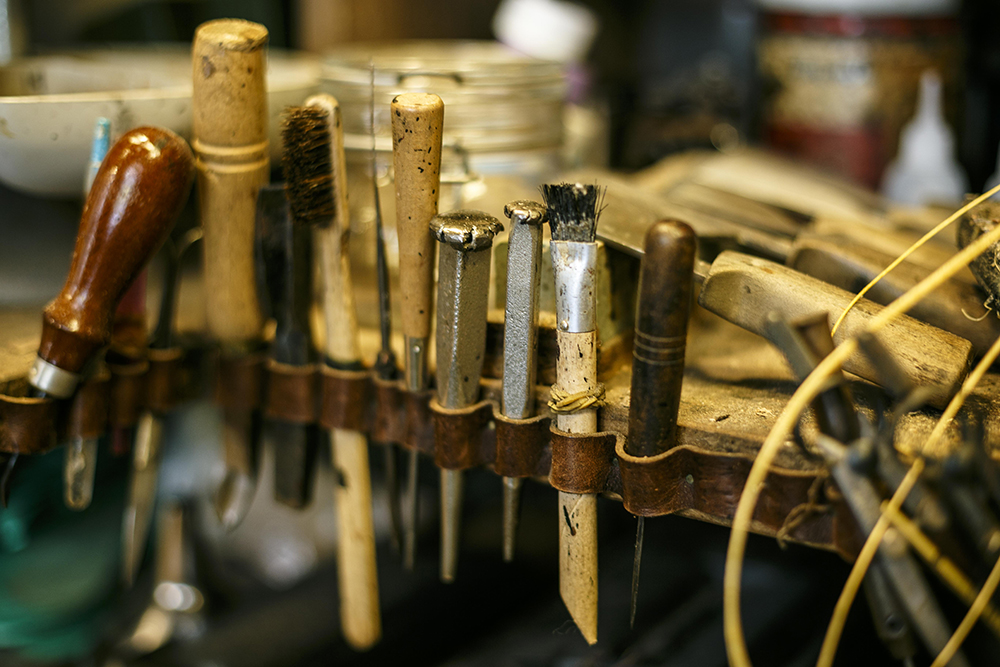 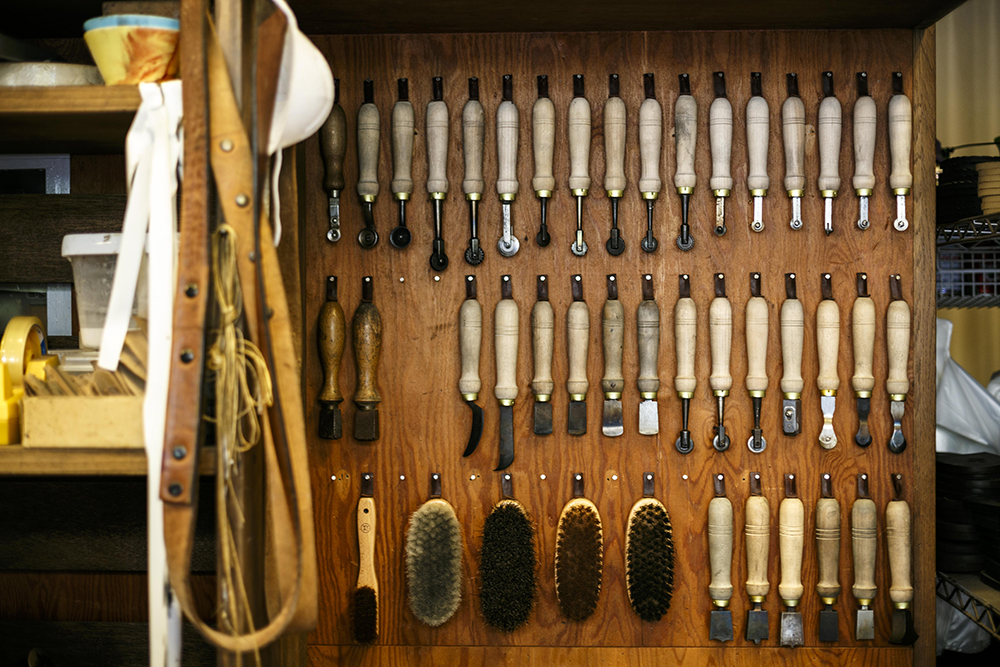 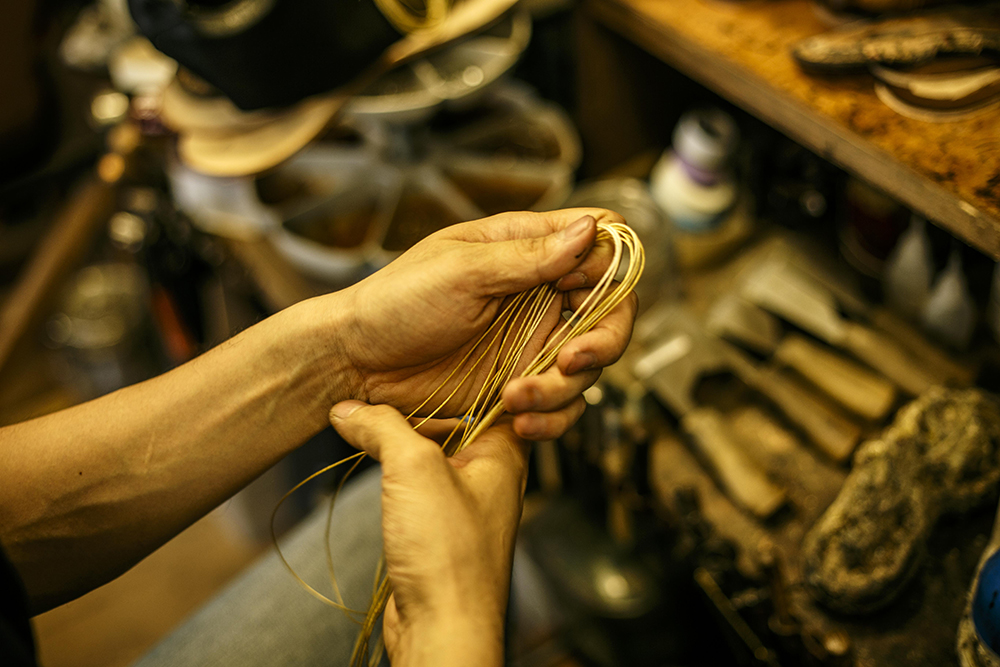 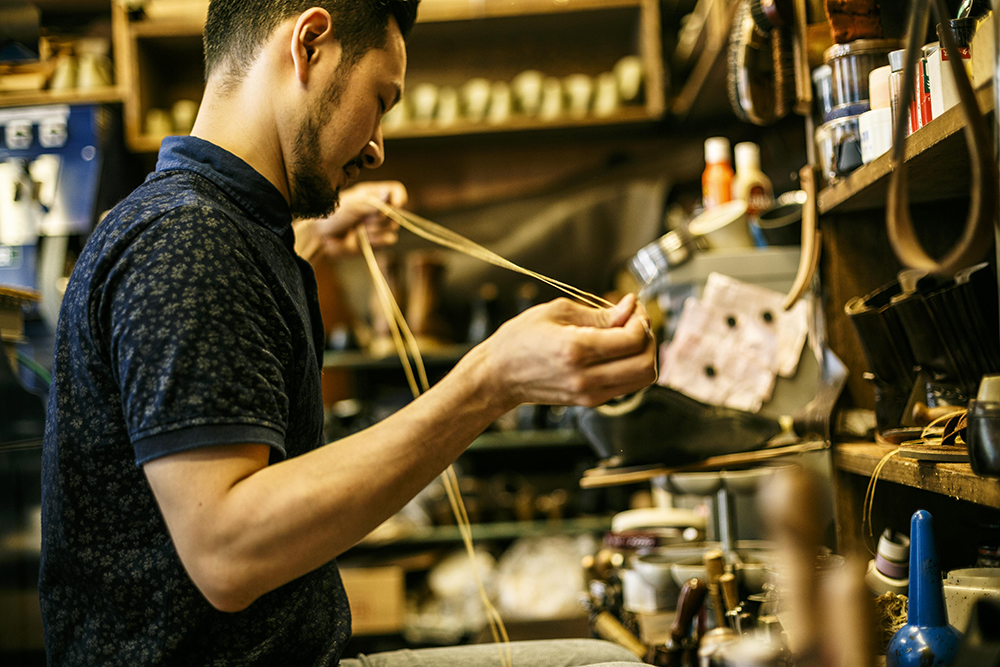 A tool case used by the predecessor. 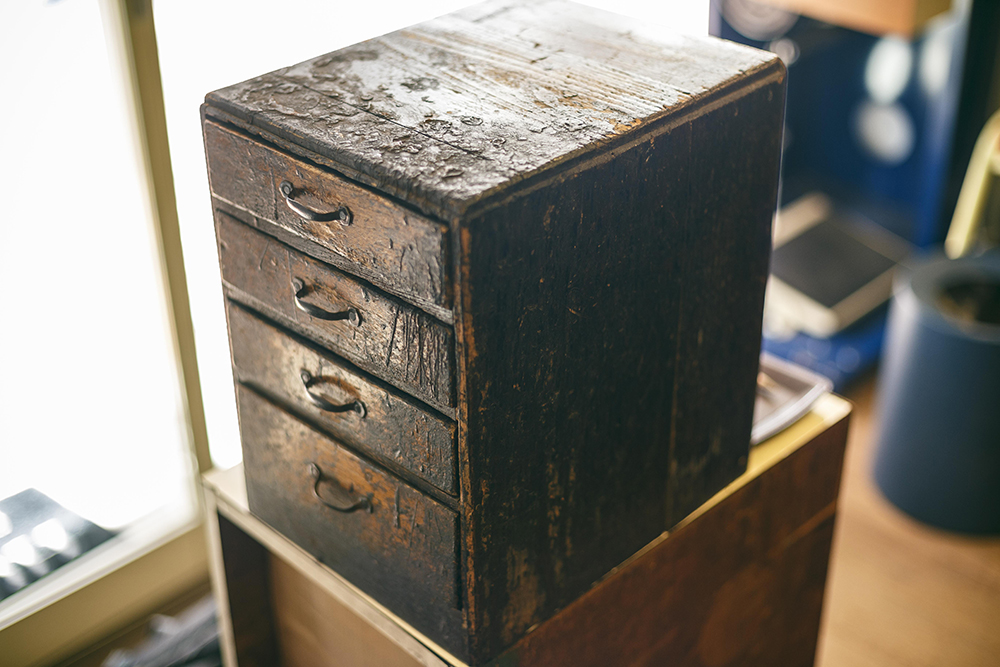 The machine that the predecessor used is also working hard. 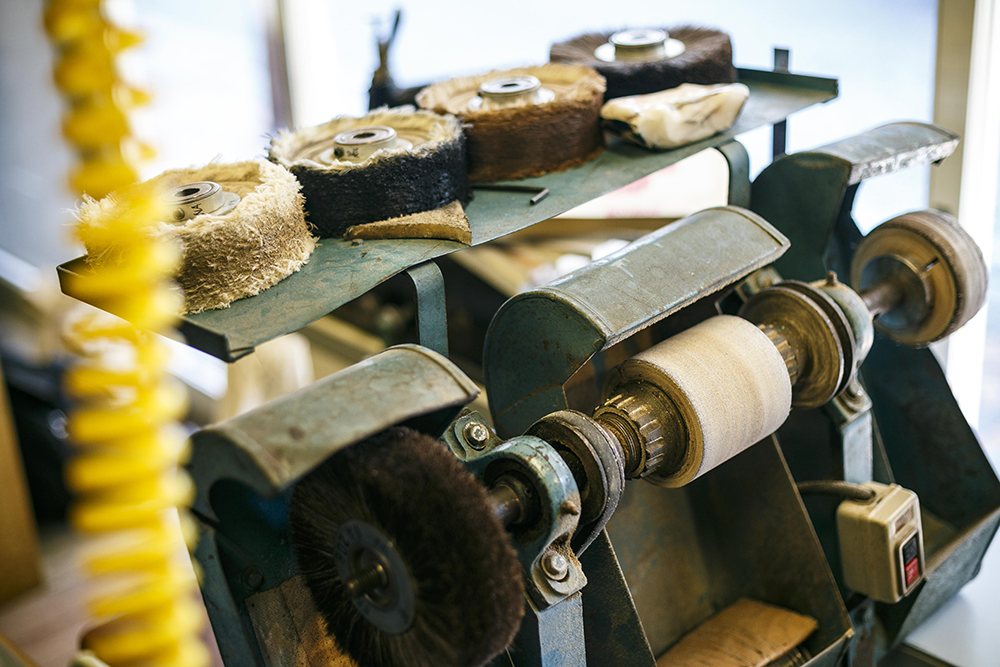 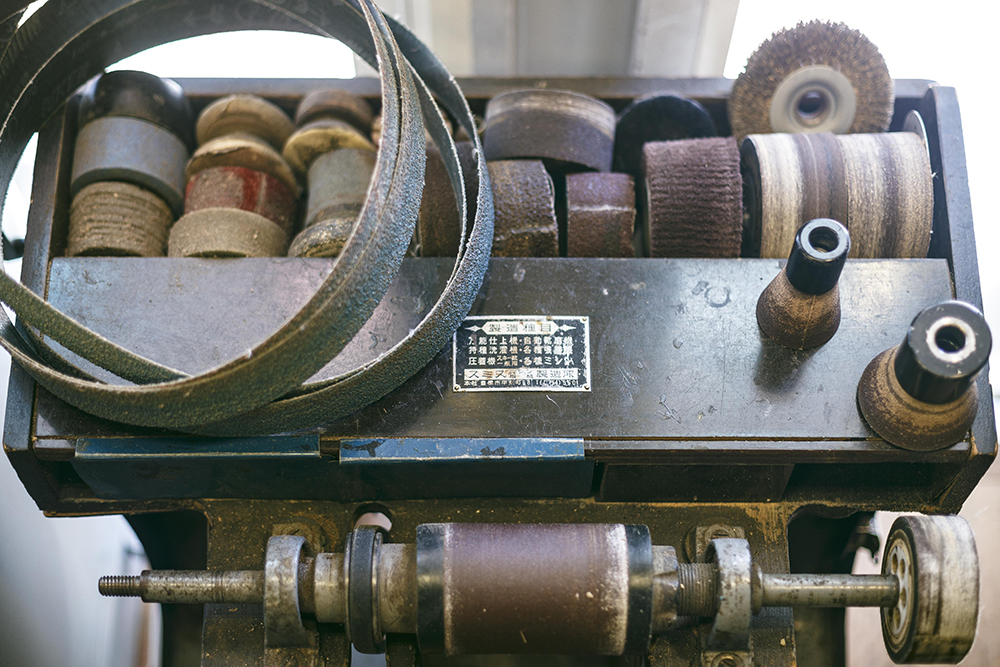 When I asked Mr. Murakami about his future plans, he said, "Next year, we will open a made-to-order shoe store in a room in an apartment 200 to 300 meters away from this store. About 72 pairs of pattern orders. I'll prepare it, "said Hudson fans with a nice answer. The shoe brand logo has already been decided. 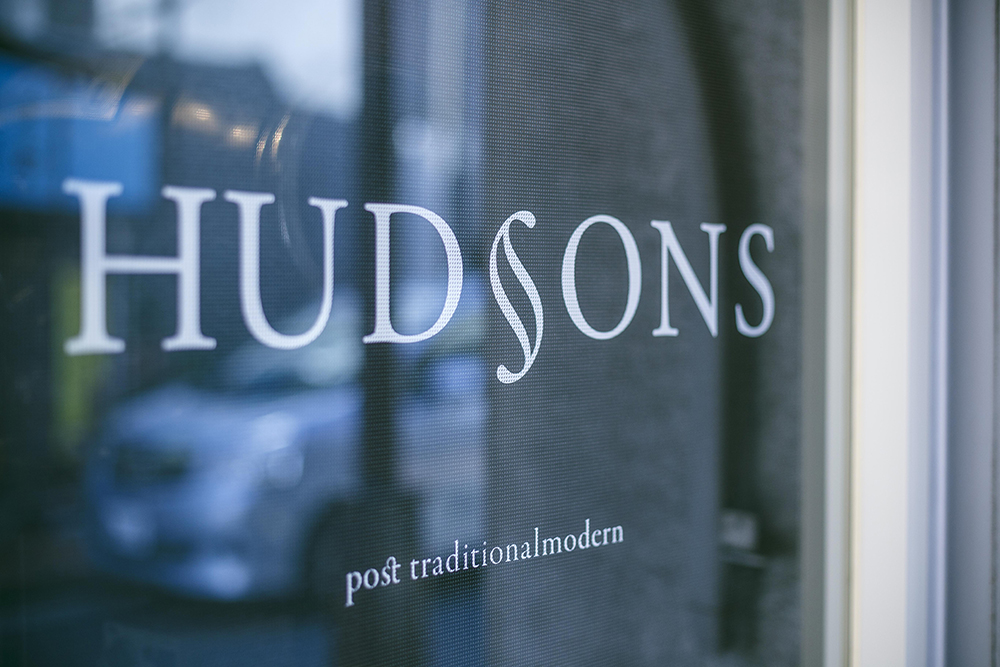 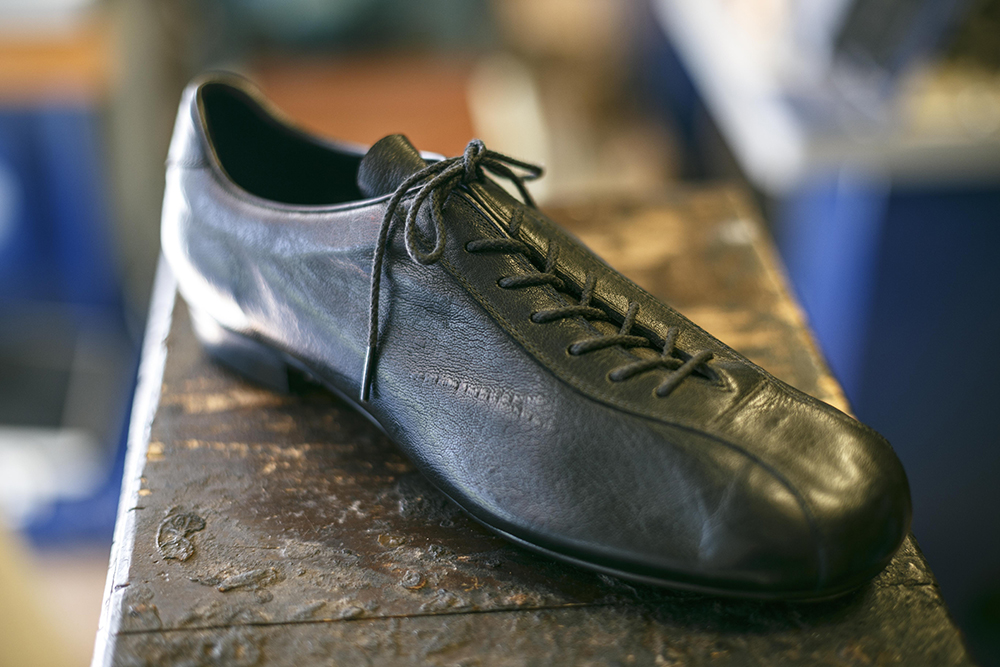 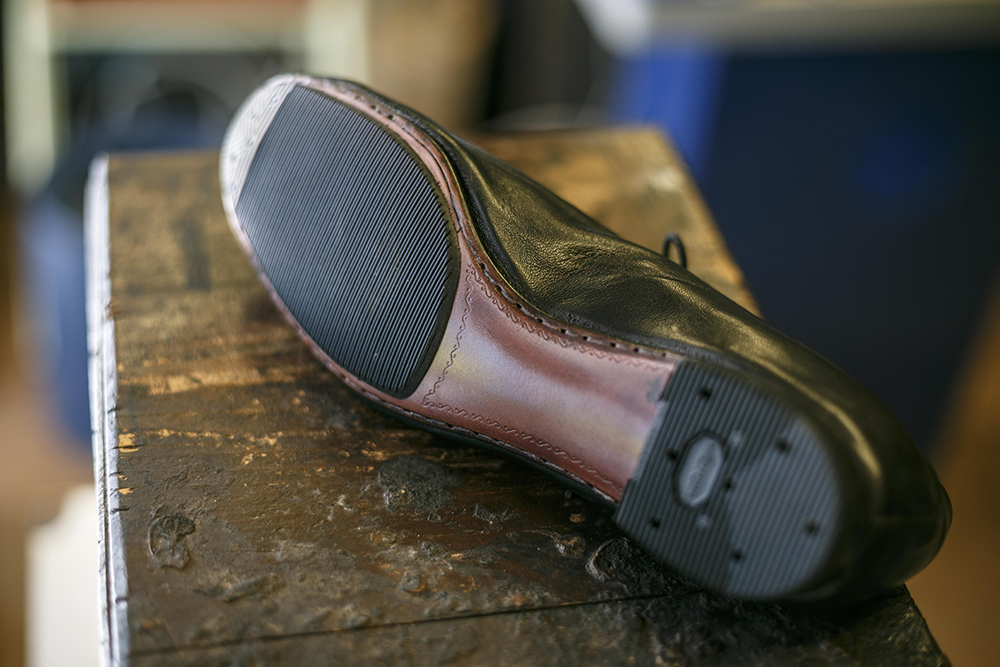 "I realized more that I became a shoemaker and inherited this shop, but the Japanese craftsmen in the old days were really doing their jobs at the risk of their lives. As a craftsman, I also said," Professional I would like to work carefully so that customers can evaluate me as a "professional in the middle", "says Murakami. Well-maintained tools, big machines waiting for their turn, and above all, Mr. Murakami's hands with pine shavings show his love for shoes.
ncenter size-full wp-image-60277 "src =" https://magcul.net/wp-content/uploads/2017/09/HUDSON_MG_4870.jpg "alt =" "width =" 1000 "height =" 667 "/ > 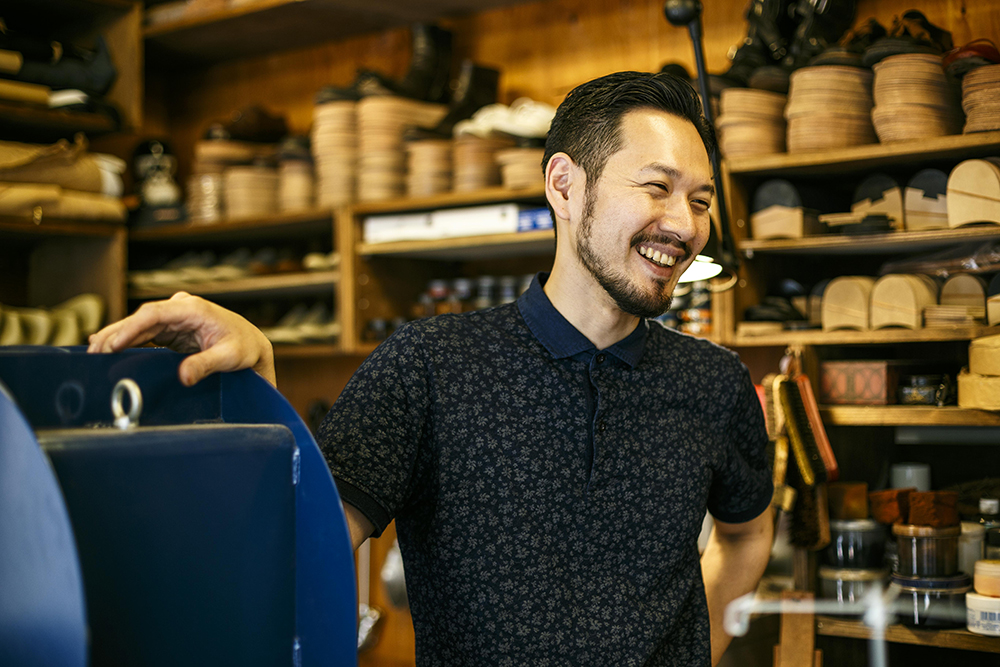 At Hudson Shoe Store, we repair shoes with the idea that "repair of shoes" = "repair of memories". Shoes spend a lot of time with you. Travel, school, work time, time with family, lovers and friends. Shoes share various memories. Depending on the condition, it may be cheaper to buy a new one than to repair it. I'm sure that more "memories" are shared with shoes that are repaired even in such a state. We are proud to repair your precious shoes, and hope that the repaired shoes will support your health from the ground up, spend more time together and share more memories.