“When you see this movie, everyone becomes Mirai Moriyama. Regardless of age or gender, everyone feels like him and their hearts get tight.”
Atsuko Yawata, the manager of "Yokohama Cinemarin", told me about the movie poster that caught my attention. It wasn't an interesting movie that matched the feelings of the main character, but rather a movie that ``became Mirai Moriyama''. At the same time as my interest in the work was aroused, I could feel the love and passion of Mr. Yawata's film.

Looking over Isezaki-cho after a long absence, some of the familiar shops have been replaced by new ones. Even so, there is still an unchanging atmosphere, and there is still a corner that looks like the scenery of the Showa era. Invited by movie posters and retro signboards, you will find “Yokohama Cinemamarine” down the stairs to the basement.

The interior of the renovated building is bright and clean with white as the main tone. There is a reception in front of you as soon as you step in, and the reception is surrounded by movie posters and colorful related goods. When I went a little further and looked back, I saw a movie trailer playing on a projector on a part of the wall sticking out from the ceiling. It's an exciting device that makes you feel like you've found a hidden track.

This cinema has one screen with 102 seats and adopts a screening system that combines digital screening and film screening. One of the big attractions is the high-quality sound.

The history of Cinemaline dates back to 1954, more than 60 years ago. During the heyday of movies and plays, when nearly 40 movie theaters were lined up from Isezaki Mall to Bashamichi, Yoshimoto Kogyo started as "Kagetsu Movie Theater". After that, the Kagetsu Movie Theater closed in 1963, but changed its name to the Isezaki Kinema Theater the following year and reopened under the new manager. In 1986, the son of the manager took over, and in 1989 the theater name was changed to the current "Yokohama Cinema Marine" without changing the parent company. For a period of time, Nikkatsu's Roman Porno and All Night were the main focus, but around this time, Shochiku-based works were mainly screened.

In 2014, the wave of digitization hit Yokohama Cinemamarine, which has survived the changes and remained in the city of cinema. The film had been planned to continue to be shown on the projector, but no more film works were made, and the museum was in danger of closing.

At that time, Mr. Hachiman, the current manager, received a phone call.
"Didn't you say you wanted to build a movie theater, Mr. Yawata? Actually, a certain movie theater is about to close. Why don't you take over?"

When the person in charge of cinemalin's projector maintenance thought about how to keep this place alive, he remembered Mr. Yawata, who was active in the movie circle. Mr. Yawata, who had no experience in running a company, was told that he had to reply immediately because he was keeping the building owner and former manager waiting, and he was encouraged to say, "Then you have no choice but to do it." Stand up and make a big decision!

When running a movie club, it takes time to move large sums of money, so Yawata decided to go it alone. It was a challenge that would have used up all his assets, but with the support of all the brothers, who said, "Isn't it good because it contributes to culture?" was born. It's a dramatic development that could make a movie with just this. 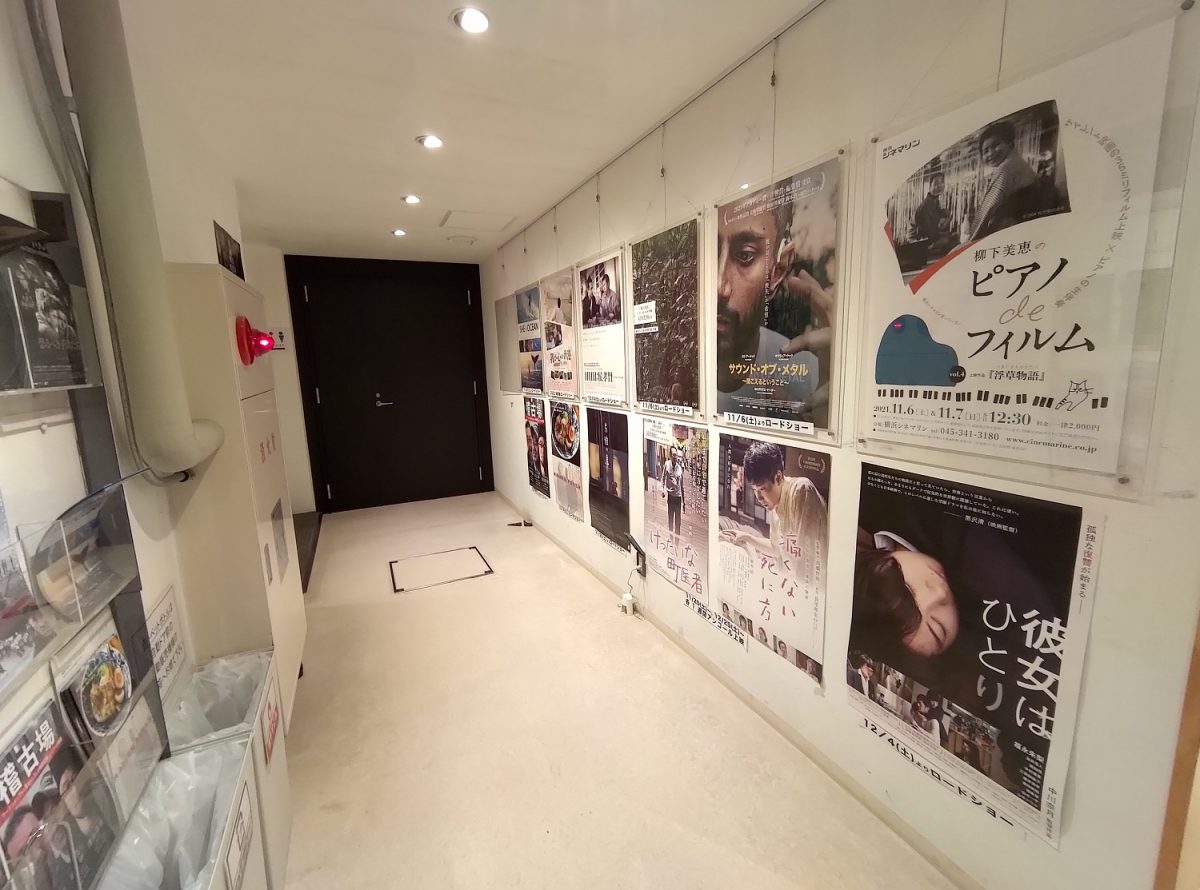 When I first became CEO, I left the negotiations for big projects with distribution companies to experienced staff members. It seems that he started to negotiate and get the work. At first, my experience and relationships were almost zero, so I couldn't get the movies I wanted, and there were often gaps in the screening schedule. It seems that he filled the hole by organizing a special screening.
“There were an unusually large number of special features during that year, such as Seijun Suzuki and Ren Osugi,” Mr. Yawata laughed as he looked back on those days. This strategy proved successful, and he began to receive talks that "Cinemarine seems to be good at special screenings," and the number of films he could get gradually increased.

Special screenings and events like this are truly Cinemarin's strengths. When I asked him about the war specials he does every summer, he replied:
“Before we took over the movie theater, we had been doing peace movies in the summer. I think it's the role of a movie theater.We do it every year because we want people to learn about that kind of history from movies.I plan to continue doing that."

Cinemarine is a place where you can not only enjoy movies, but also learn through movies and make new discoveries. Furthermore, it even provides an opportunity to come into contact with the place called Isezakicho.

Mr. Yawata says, "I want to hold more community-based events," and he is already collaborating with nearby shops on various occasions. When there is a special feature on Taiwanese movies, they will hold a regular discount campaign for ticket stubs at a nearby Taiwanese restaurant, and they are planning to collaborate with a jazz bar for the upcoming jazz movie feature. These events and collaborations are possible only because Isezakicho is a good "town for the common people," he said.

“Isezakicho is a town for the common people. The long-established clothing stores that used to be there are steadily disappearing…it used to be a kimono town. It's not Yokohama Station, it's not Minatomirai, it's not Motomachi, it's Isezakicho.I think it's easy to come here.For people who come from other places, there's a shopping street like this in such a place. There were quite a few people walking around, and I was wondering where they came from. That makes me very happy."

On the way home, I looked over the posters of the movies scheduled to be screened, and when asked what I kept in mind when choosing a movie, I was told, "I don't intend to choose a movie that reflects the sociality of that era, but I chose a movie as a result. Many of them reflect the social nature of the times.”
I once again felt that the movie experience at "Yokohama Cinema Marine" is entertainment, learning, discovery, and encounter. In this underground space down the stairs, I would like you to temporarily disconnect from reality and experience a dream time unique to "Cinemarine".