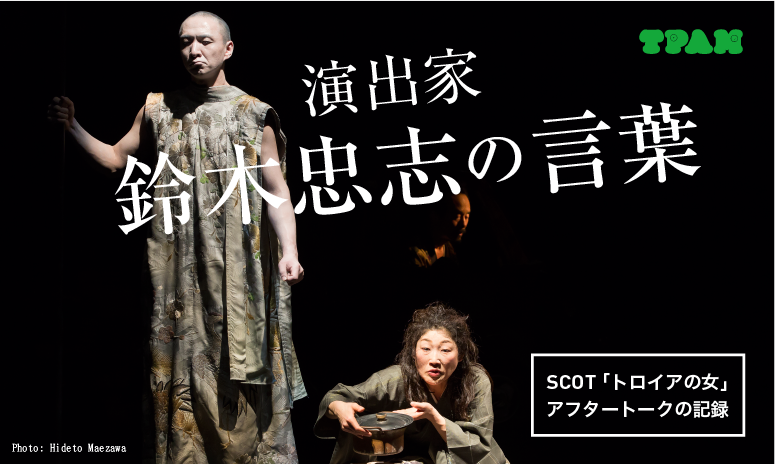 "Woman of Troia" was re-performed at TPAM2015, an international meeting of performing arts held in Yokohama from 2.7 (Sat) to 2.15 (Sun). Under the guidance of world-famous director Tadashi Suzuki, this work, which was revived with a new production for the first time in 25 years by the theater company "SCOT" based in Toga Village, Toyama Prefecture, is intensely for those who see the violence of war. I appealed. After the performance, a talk was held with program director Masayuki Nomura, and spectators of a wide range of ages, including those from overseas, listened to the words at the venue.

The darkness of modern society

--"Troia no Onna" was re-performed at "SCOT Summer Season 2014 & 1st Toga Asian Arts Festival" held in Toga Village, Nanto City, Toyama Prefecture last summer for the first time in 25 years. When I saw it in Toga, I was shocked that it was a work that still raises questions about the same era 40 years after its premiere in 1974, but in this performance, in the large space of the KAAT Kanagawa Arts Theater Hall. It was more impressive that it seemed to carry a big darkness in the back of the stage.

Suzuki Digital civilization seems to have brightened the world because it quickly connected the world with networks, but on the other hand, it created darkness in the human mind. As in Islamic countries, the recent murder crimes in Japan seem to have suddenly and absurdly revived the desires and instincts that modern people thought they had overcome.

This "Woman of Troia" is not the kind of war you think. It depicts the desire to completely eliminate one's own opponents or opponents. There is no dialogue or negotiation with the other party, and you want to eliminate the existence itself.

The president of the United States also says that Islamic State will be destroyed. President Bush used the word Crusaders during the Iraq War and the Old Testament.They even brought out the god of calligraphy and justified their actions.

Islamic State leaders also say that it is a reproduction of the caliph, but it seems that religion itself has entered the political scene and is supporting to justify their actions. Religion as a political use is in the foreground. I think it's amazing that this "Woman of Troia" was written by a human being about two thousand and several hundred years ago about the problems of war and religion, and that it really reflects the problems of today.

Euripides, a Greek, has accused him of inhumane acts of his army, inhumane acts of eradicating all his opponents. He also writes that religion does not save humans. Moreover, I am impressed because it is written with the queen of Troy, who was destroyed by Greece, as the main character. I think that human beings and art haven't really progressed.

Forgetting about those who suffered from this kind of thing two thousand and several hundred years ago, the minds of modern people who are confused by computers and financial prosperity are in the darkness.

――It is true that the world situation is getting closer to the work as you continue to see the performance at the Kichijoji Theater in Tokyo at the end of last year after the Toga performance last summer, and this TPAM performance. I feel that the message I am conceived is becoming more and more vivid.

Suzuki In neither the Greek tragedy nor Chekhov, the murder scene does not appear on the actual stage. There are no recent reports that Japan is a corpse. Therefore, when I happen to see the actions of Islamic State, I feel the human actions very cruel. But then, if you fly an unmanned aerial vehicle like the US military and kill a person by pressing a button, that's not the case. From the point of view of those who are killed, I think it will be more cruel. The Islamic State is ridiculous, but even the United States has dropped the atomic bomb and killed tens of thousands of civilians. That's why I don't really reflect on it.

Anyway, I think it's time to clearly appeal how war and religion make humans go crazy.You created the stage.

What is true internationalization?

Suzuki Japan is economically internationalized, but the place where art is created or the creator is not internationalized. I don't think there is an established place to accept people from various countries and work together for a long time or to manage the place. What Japan needs is not international exchange, but to create an internationalized place, but the values that prioritize economic efficiency and the bureaucratic management system of Japanese society are obstacles to creating such a place. If you can't use your time freely and luxuriously, you can't create art, but it's no longer a society that values such things. Especially in theater, you can make good works because real people get excited as a group, so if you suppress the exciting spirit with economic efficiency and management system, you can not do wonderful things.

Theatrical company to Toga villageThe reason why I moved the base of my creative activities is that the city is a good market for selling products, but I can't create. Moreover, the city is not suitable for collaborative work with foreigners, and it is not possible to concentrate deeply. You may suddenly come up with a good idea. It would be impossible to create a high-quality work without an environment where everyone could get together and practice immediately.

――I thought that the idea of thinking of the city as a market and having a place of creation away from it is "I see."

Suzuki: Even the fish and vegetables we eat are not directly shipped from the production area and made in Tokyo. The land is expensive for Bellabow, so no one cultivates the fields. Planting radishes doesn't work.

--To have a place where you can create with high quality. And that place is not just an "international exchange", but an "internationalized place" where people from various countries collaborate. Toga certainly does that. I think it's very important.

I Suzuki anime Toka movie to do the Ministry of Economy, Trade and Industry is in the business's another, at least not in making money, what is the future of whether or not there should be Japan, or intellectual tasks such as consider what should aim what kind of way of life of our, its value The spiritual business that seeks to create a view cannot be established in the big cities of Japan. It's better to go back to the old days, Shinran and Dogen were active in Hokuriku, and Basho and Saigyo were out of the center of power and economy, so they're doing a good job, the tradition of Japanese spiritual culture. I think Japan will have a time to review it.

――I moved to Okinawa last year, but the way I see Japan or its neighbors has changed from when I lived in Tokyo, and when I lived in the city, I didn't have time to think about it. I think there are more times when I have the mindset to think carefully about.

Suzuki: In the future Japan, politicians, business people, and artists will be on an equal footing, and we must insist on what kind of Japan we should be, or that Japan's uniqueness is here. We must say that we can answer such a universal challenge. At this time, it is important that the artist comes to the fore, for example, it is the artist, not the politician, that we feel the excellent national character of other peoples. Mozart is Germany / Austria, Chekhov is Russia, and we don't really know the politicians of their time. But they are the property of mankind. Like this Euripides.

Politicians and scientists have begun to cooperate on environmental issues as a common issue for all humankind, but we, the theatricalists, have also raised the issue of finding future issues for humankind and collaborating internationally. I hope that TPAM's activities will be a milestone in whether we can create a place in Japan where we can work toward solutions and produce human resources worldwide.

SCOT's base in Toga Village consists of six theaters, a rehearsal hall, and lodgings, and theater people from all over the world gather.

--On the stage of SCOT, actors who have been trained by the actor training method "Suzuki Training Method" devised by Mr. Suzuki will appear. Even in "Troia Woman", strongThe acting and physical techniques of the actors with great energy always created a sense of tension on the stage, which was the basis for conveying violence and cruelty. Could you tell us about the "Suzuki Training Method"?

Suzuki : Technology is important for artists, but the most important thing is whether or not they have a message to others. Since there is a message, technical training is required for that, so it is this message that is weak to Japanese theater people. Therefore, the technology is inevitably low. For example, at the time of Euripides, I would have sent a message to 10,000 spectators with a live voice. Voice and body training for that, how to speak words, it is natural for actors to do these technical trainings, and it is not possible to appear on the stage with that dull everyday body. There will be no. I also wanted to spread my message worldwide, so I thought about a training method for acting on the Suzuki-style stage, and I didn't just invent training techniques for theater in general. Well, critically speaking, many Japanese theater people play theater as a hobby, so it may be that they are not doing theater for their social mission.

――This time, TPAM has set "Asia Focus", but if you look at Japan from that perspective, it can be said that it is special that the culture has been transmitted to Europe and the United States even before globalization progressed. .. This time, I definitely wanted to perform SCOT at TPAM because Mr. Suzuki and other people set up Japanese contemporary performing arts-a unique performing art that is different from traditional performing arts-and sent it to the world. It was also because I wanted to take that up properly. Finally, could you give us a few words about Asia?

Suzuki There are various countries in Asia, and each of them has an excellent cultural heritage of the past, but it's like a community banquet and it's an entertainment. It's the same kind of human entertainment. This globalIn the era of Zation, it would be like enjoying antique junk as it is. Art has the power to convince people with different values that this is important. Of course, junk can be a treasure for everyone depending on how it's used, but Asians haven't found a way yet. Art is what bridges other people who do not share the same values, establishes dialogue, and encourages joint steps toward new possibilities. Kunio Yanagita presupposes those who have no equal faith. It is something that is conceived as. It's different from dragging the tail of one community or nationalism.

Whether it's the legacy of the West, Shakespeare or the Greek tragedy, I think it's a junk, but it's just a new place, a different context, and an encounter with a different culture. Putting it in a relationship often helps for the future of mankind. In that respect, with regard to Asian junk, it may not yet be clear how to make it shine. It can't be helped if you're just imitating Western monkeys, and you can't help boasting the old ones like a politician. I think Asians could have realized that, but the next one is difficult. Anyway, through trial and error, I think that theater is an energy-intensive work that can only be found in Gambal.