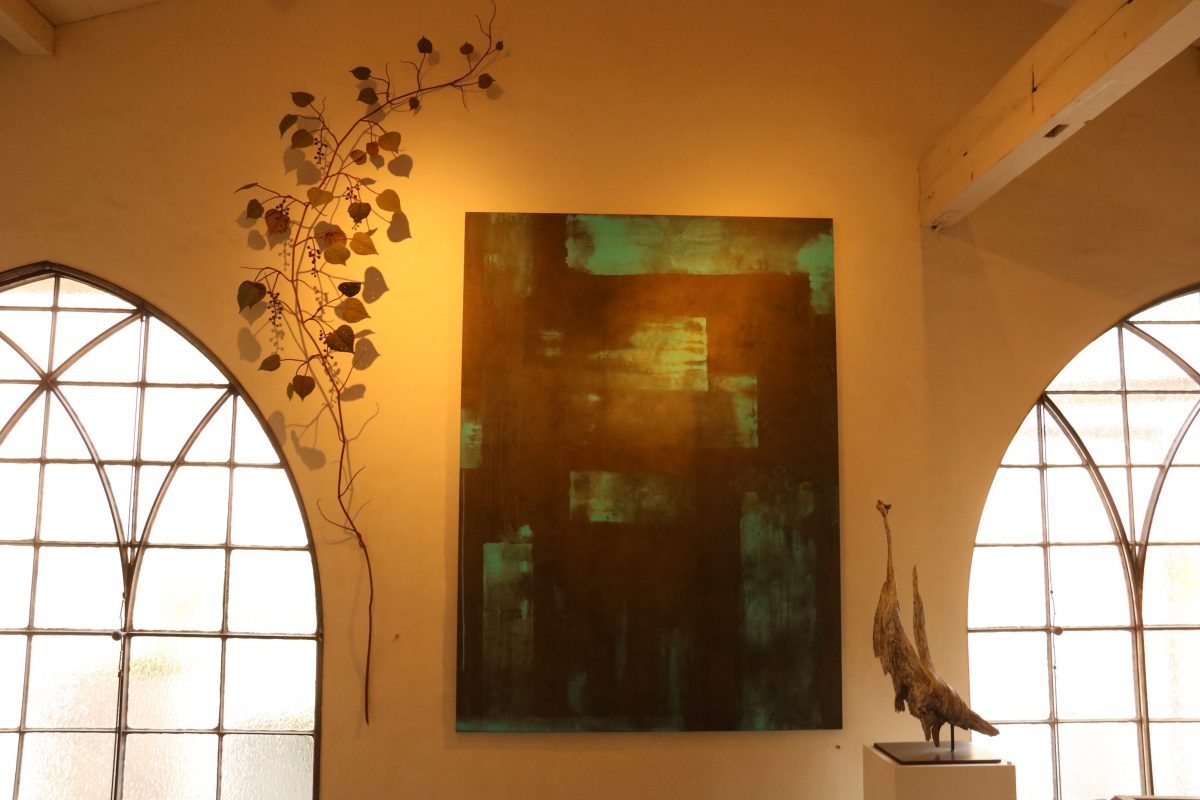 I like the word "appearance". When I touch the air that things are giving off, such as the certain presence in the tranquility and the sensuality that is created, I sigh, "Oh, that's wonderful."
When multiple people are gathering together, I have a longing for a beautiful person who has a strong presence but can disappear.

A few years ago, when I first saw Morrison Kobayashi's wood carving work, I felt that kind of atmosphere.

The shock and joy that Morrison's atelier is near my local home!
There, Chiyo Takasato and Daisuke Nakamura presided over the "special source". Each artist's activity, interior design and construction. 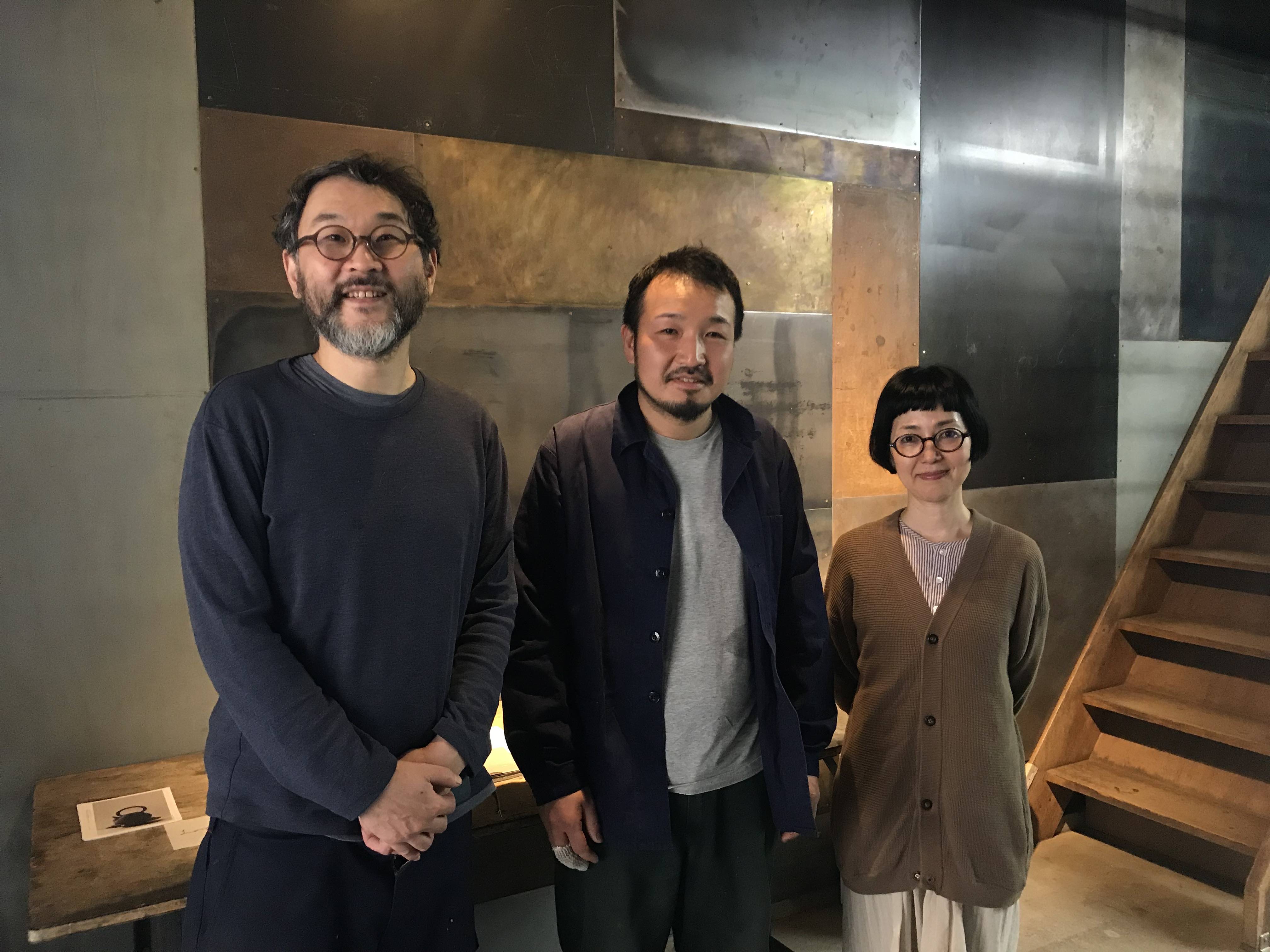 Morrison was in charge of store design at IDÉE in the interior from 1995 to 1999. Speaking of IDÉE, in addition to antiques, I was a pioneer in proposing modern interiors, miscellaneous goods, and living with plants overseas, so I used to go to the store on Kotto-dori in Aoyama since I was in my twenties. .. That is the same as when Morrison was enrolled, but it is a treasure trove of stimulation, and I still remember that crushing feeling.

"I've always liked Yasutake Funakoshi's sculptures, but in 2008, Hideki Maekawa's exhibition called" Water Source "was the catalyst for starting wood carving," says Morrison.
Maekawa-san, I oftenAlthough he is a well-known writer, he is an artist who spins the words that are born in himself and expresses a story reminiscent of a myth with a statue, and his reality and fantastic deep world view captivate the viewer.

"While I was busy with interior work, I was actually worried that I couldn't communicate because my hearing started to deteriorate in my thirties. When I was deeply shaken by Mr. Maekawa's sculpture, this way of expression Then I thought that the work would speak for me. " 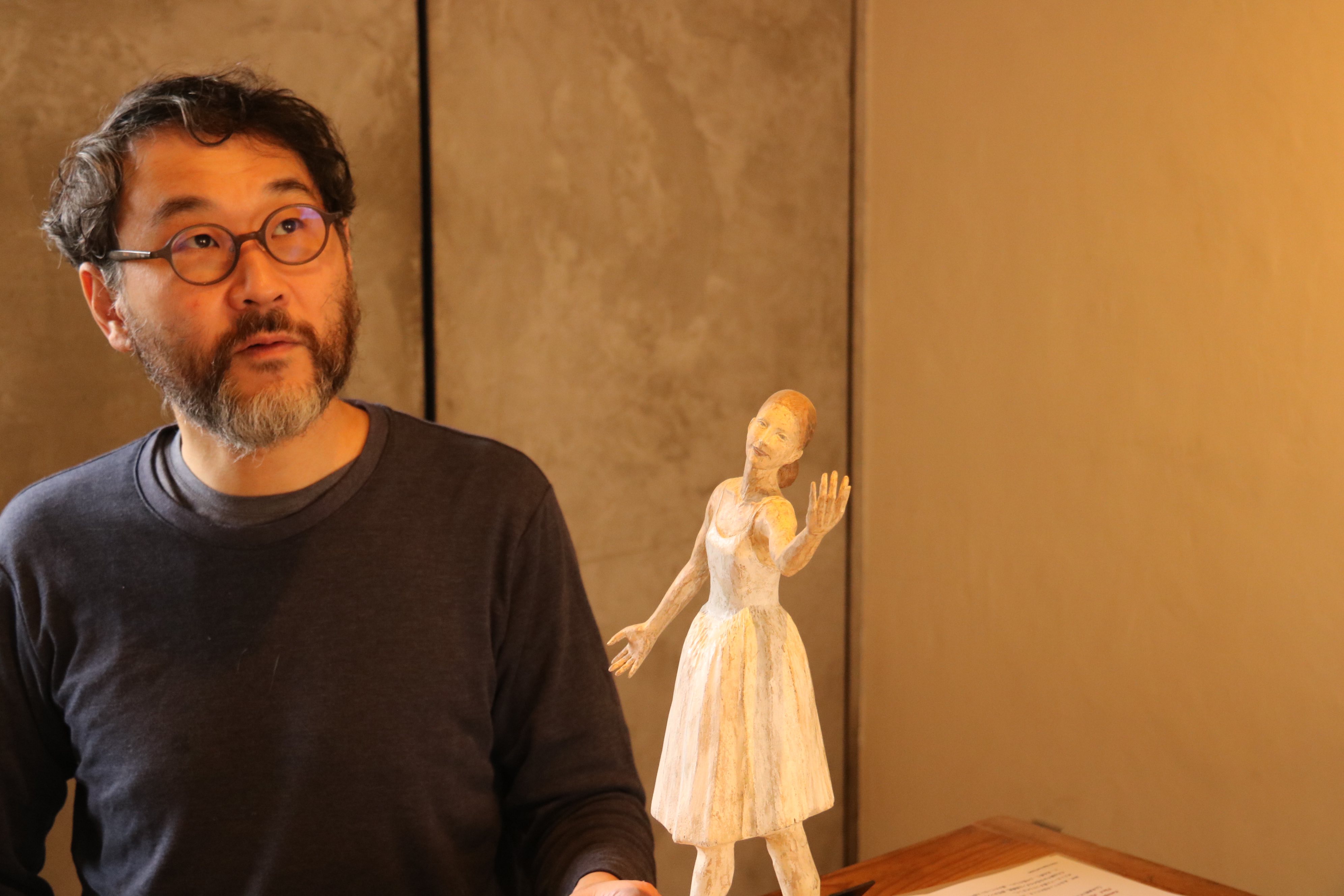 Morrison, who started his career as an independent artist.
The first piece I carved was a ballerina that Mr. Takasato, who was active as an accessory writer, added to the display when he held an exhibition on the theme of ballet. The ballerina, who carefully came out from the back and showed me, had a calm and transparent appearance.

Mr. Morrison said that he continued to face himself and carve, such as actively participating in the wood carving workshop held by Mr. Maekawa, who he respects, saying that he can see his own personality by going through the process. I've started to handle meetings, but I'll ask myself again.

"I like wood carving, but I feel a distance from myself."
"What I'm going to do as a writer and whether the work I've done so far is being put to good use."

Strangely, I was invited to an exhibition on the theme of "coexistence with nature, circulation of substances", and the metal I had touched for a long time in the interior work was connected with my favorite mountain climbing, which led to the "Botanical Record" I am currently working on. It seems that it was. 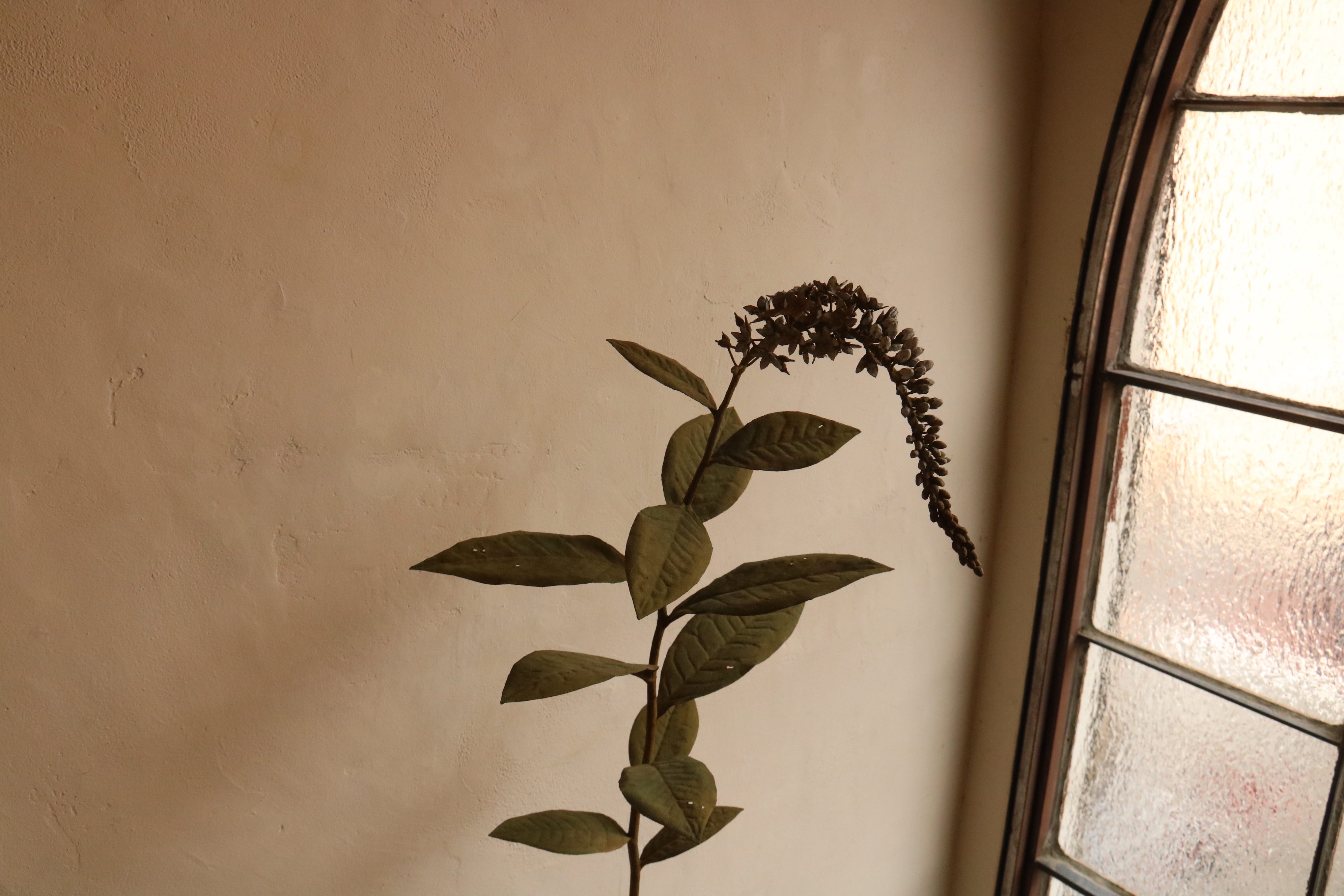 It looks like a plant itself, but I'm surprised that they are all made of metal.vinegar. The delicateness of a work cut out from a metal plate and colored with rock paint or rust.
"In the mountains, even pretty plants can show off their vitality. It's like recording their memories."

Designer / craftsman / writer. I'm really convinced that the balance of these three is the shape of Mr. Morrison and the voice. 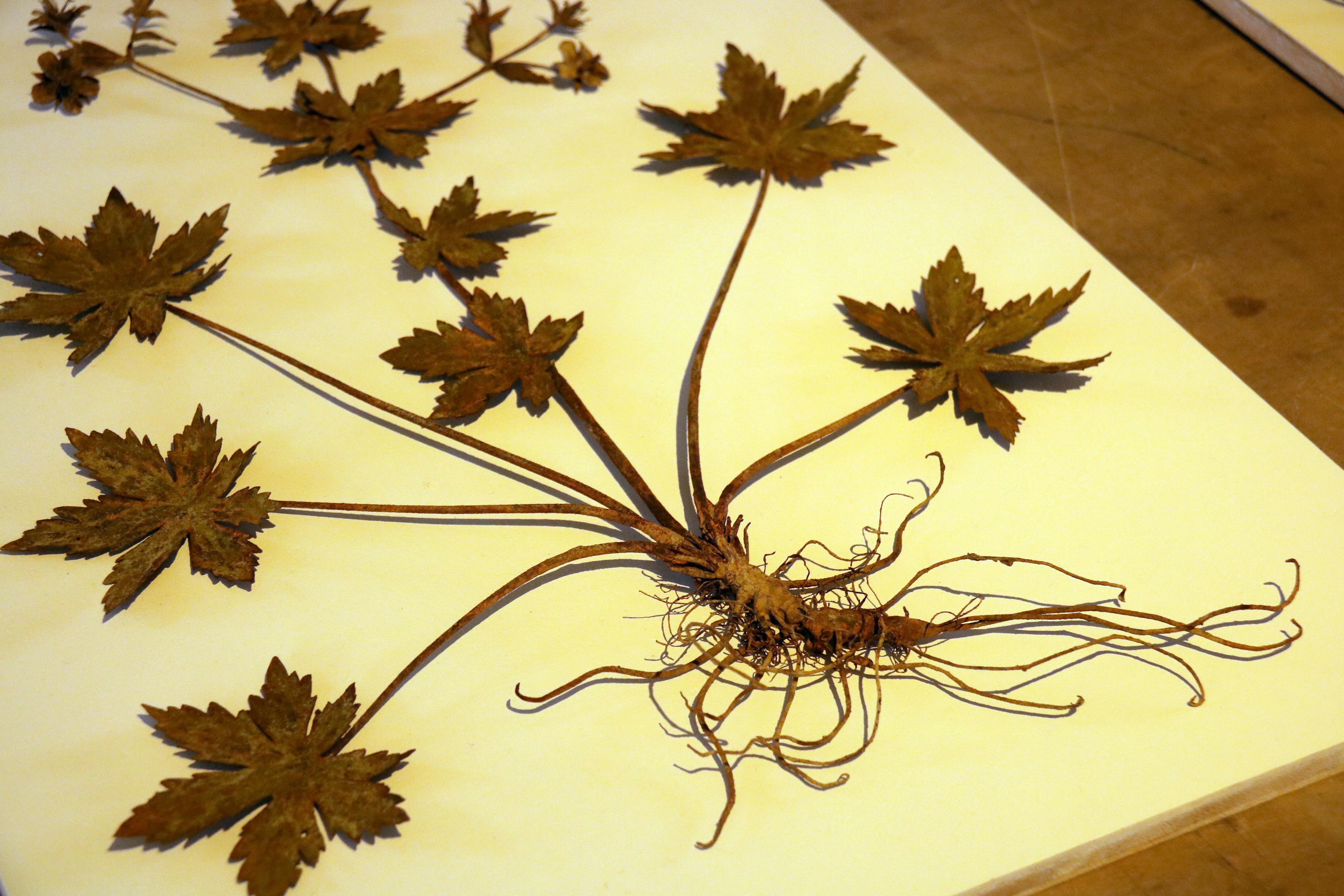 The works of Morrison, Takasato, and Nakamura are lined up in the special source space that looks like the attic of a European church, but they all have the comfort of interacting with each other. Mr. Takasato's role is the permanent space composition.
"I'm trying to connect everyone's works that came out in my way and make them like it."
"Yes, that's right!" Morrison and Nakamura nodded deeply (laughs), and I can tell that they have great trust in Takasato's sensibility. 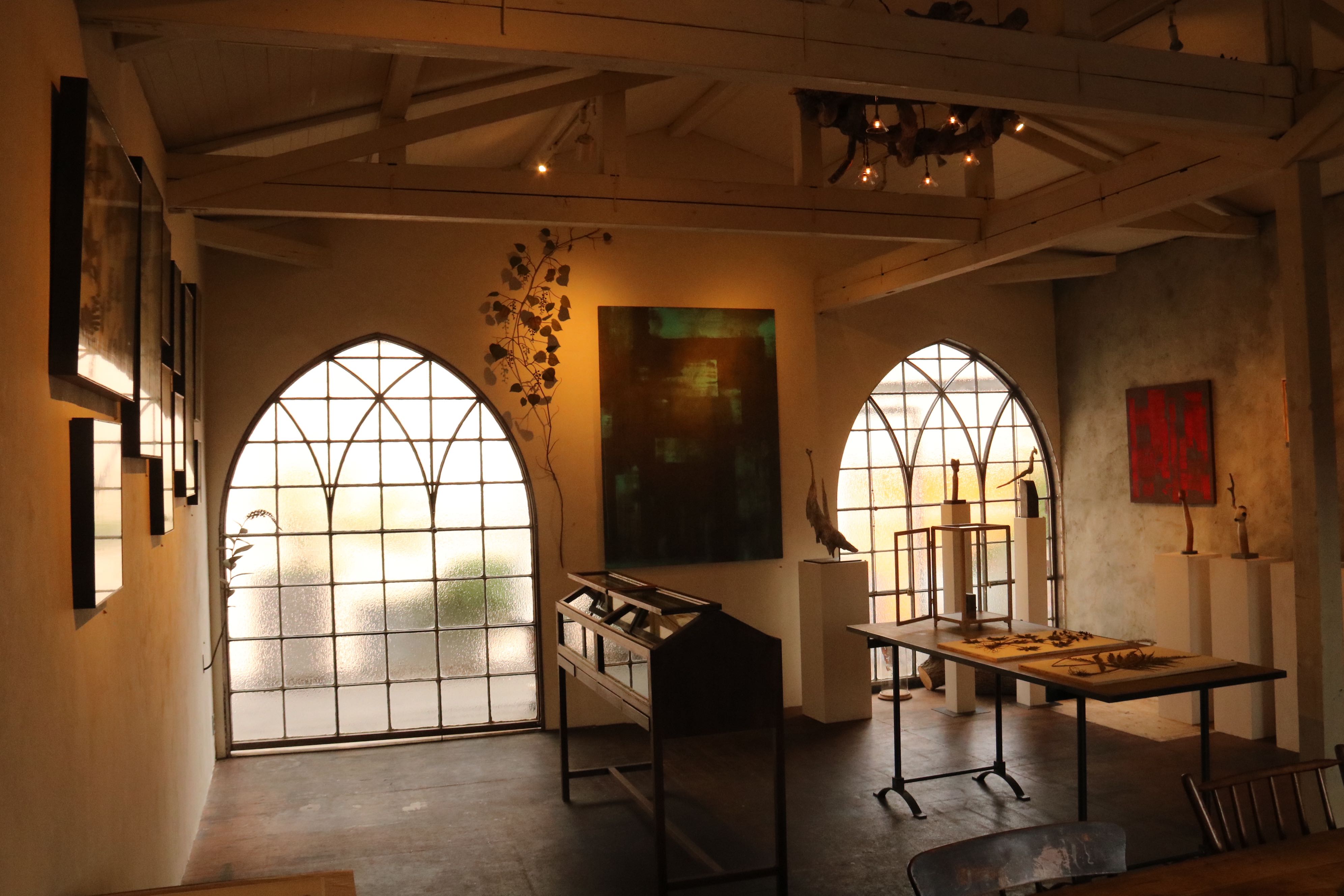 Mr. Takasato himself was an accessory designer while making paintings, but he says he was always looking for his own direction. "While working as both a designer and a writer, I couldn't help feeling like I was lying in the world of accessories." 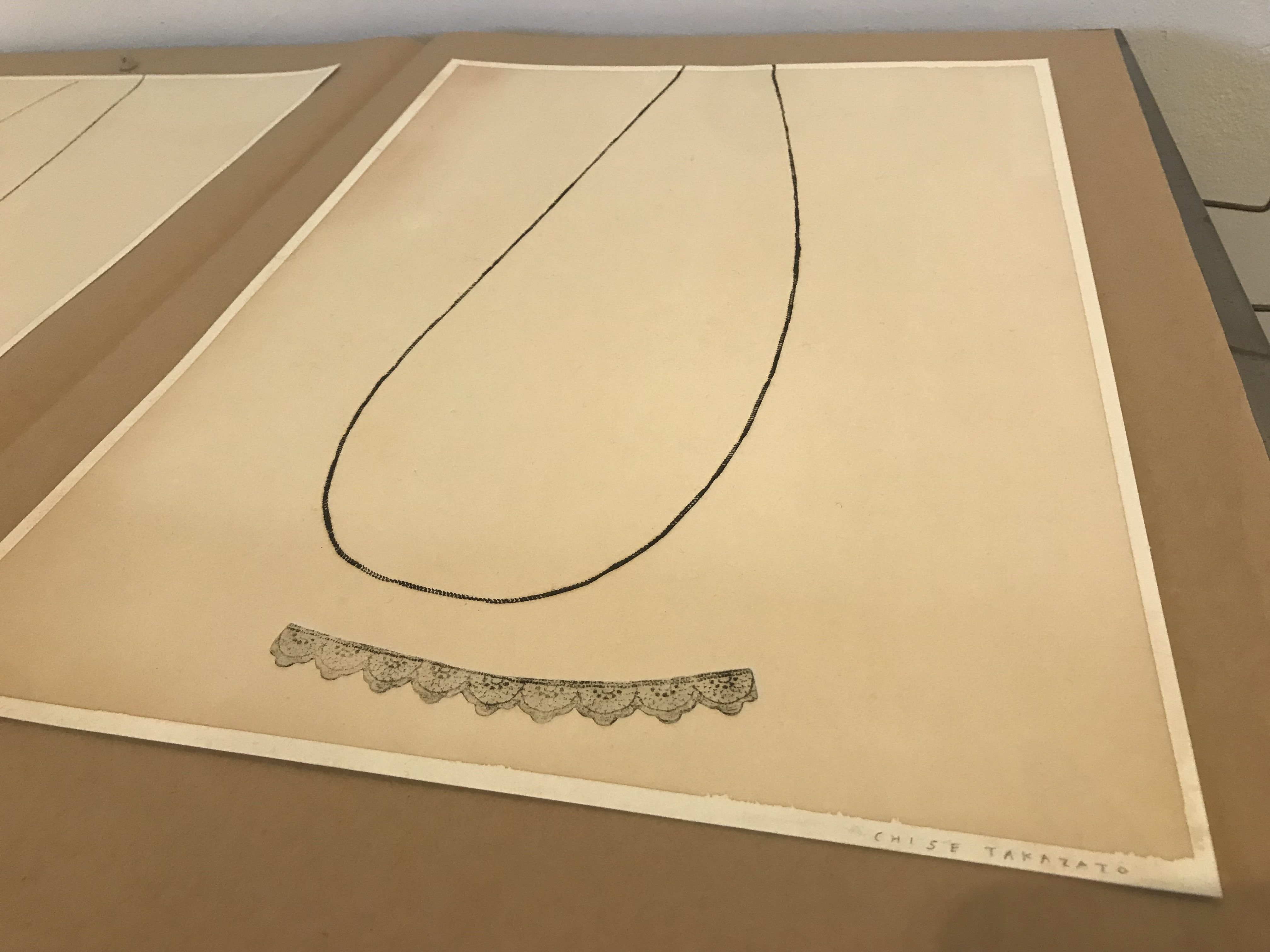 Like Morrison, when I met Maekawa's sculpture, I was shocked and said, "There aren't many important things.Mr. Takasato came to think. "I want to concentrate on drawing a single picture," and I became more and more interested in it. rice field.
Mr. Takasato, who smiles quietly, says, "I can see the outer frame of art, and I know where I should walk." I saw an enviable and beautiful appearance. 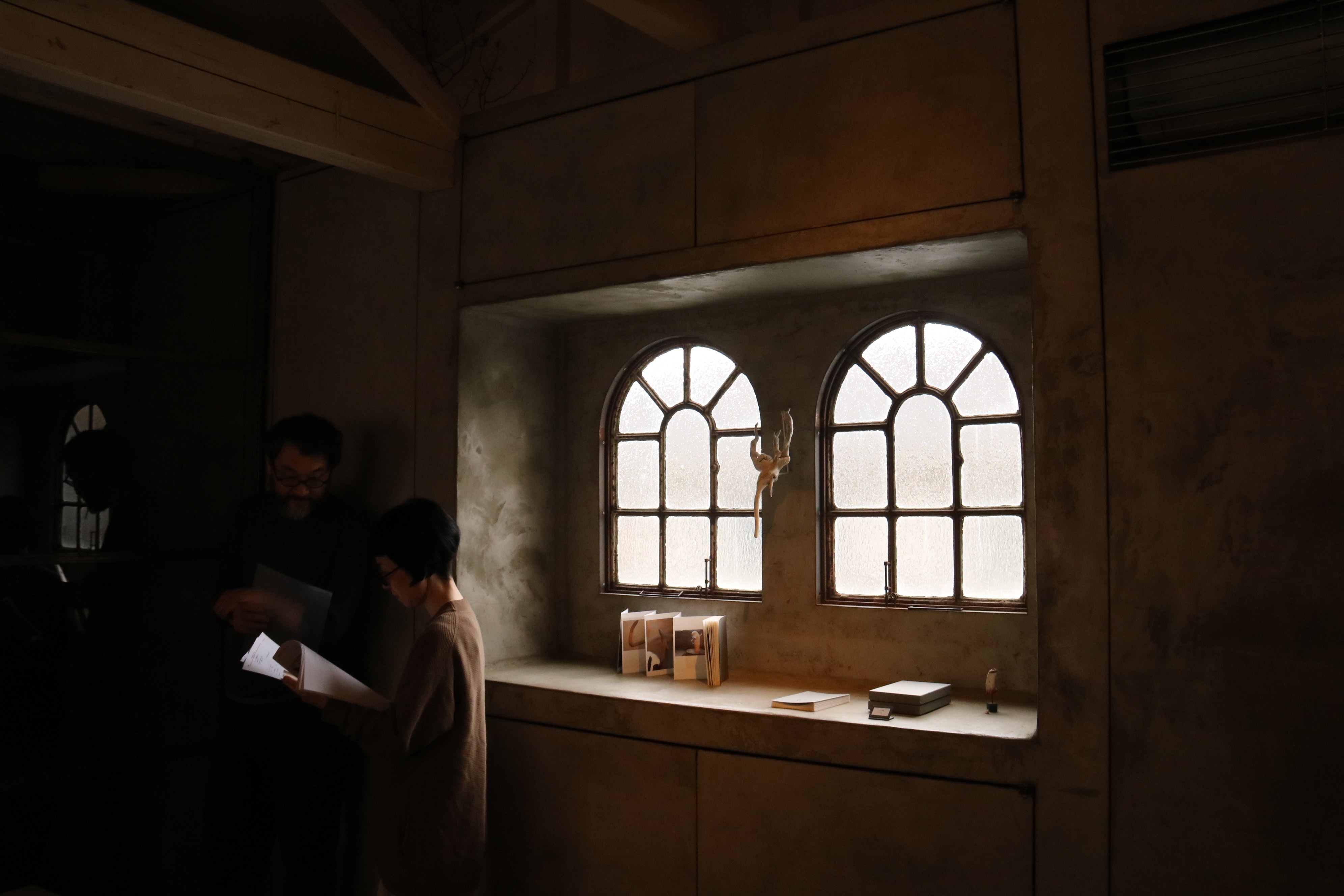 Mr. Nakamura visited Watts more than ten years ago and actually carved the name "Morison Kobayashi" in my memory. When he was a student studying interiors, he helped Morrison to get involved in metal work, so he sympathized with Morrison's thinking and had a long relationship. After working for another company, he became an independent member of special source, and while working on store interiors with Morrison, he continues his creative activities. 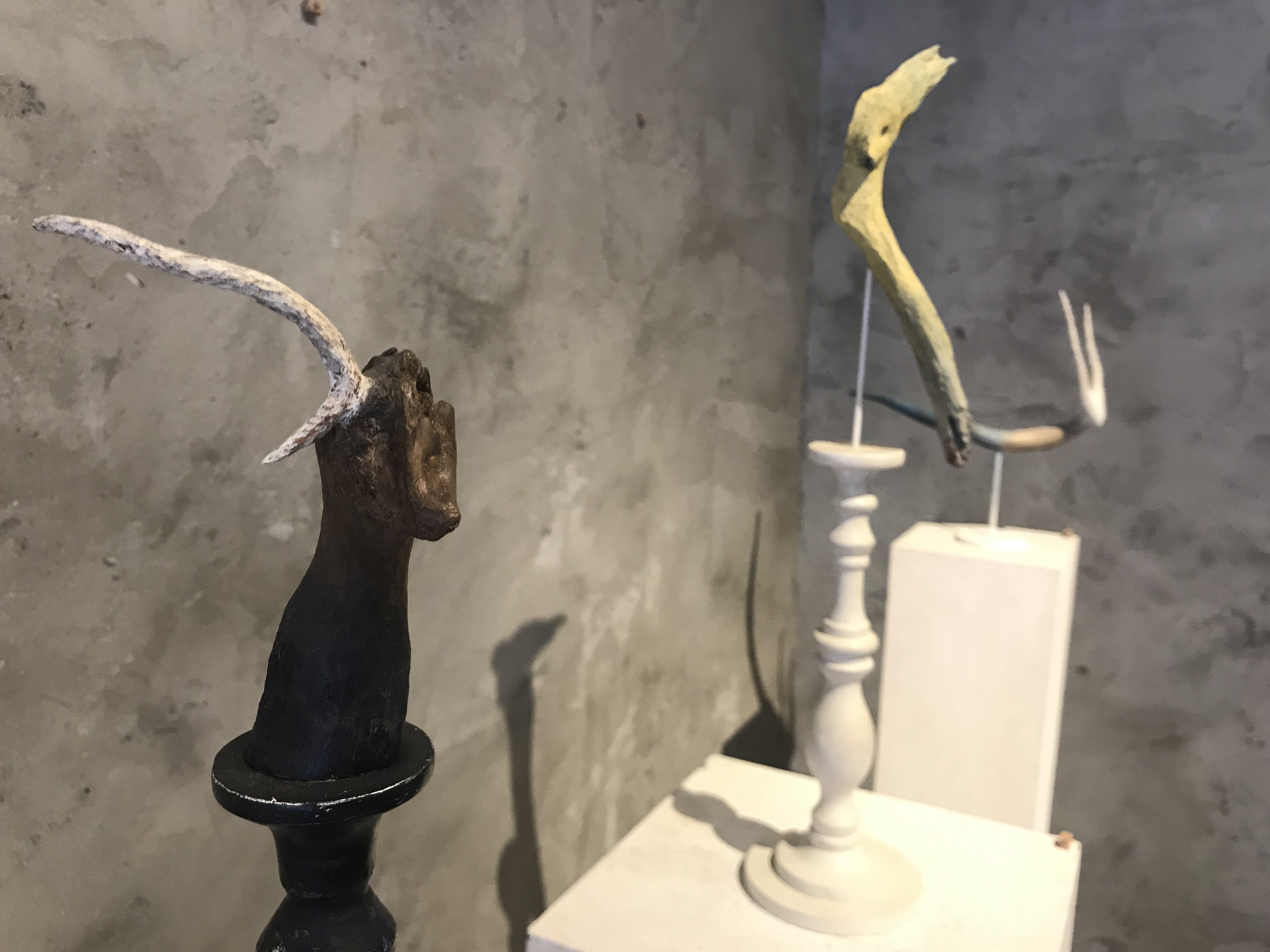 Mr. Nakamura, who had been making dolls from scrap iron before belonging to the special source, also participated in Mr. Maekawa's wood carving workshop and experienced the real pleasure and joy of carving. It expands the range of creation, captures the knots of trees as facial expressions, and expresses creatures close to animals.
As Mr. Nakamura said, "When you enjoy making it, it will be a good finish," as Mr. Nakamura said, there was a humorous charm that these children would start chatting at night. ..
uploads / 2019/06 / IMG_9155_mini.jpg "alt =" "width =" 3324 "height =" 2340 "/>

I was really nervous about the special source, which has a cool interior and expression.
However, I wasn't dexterous at all, and when I saw the three people who walked in good faith while searching for something, I felt relieved. Is that the reason why the dignified and soft air is flowing? 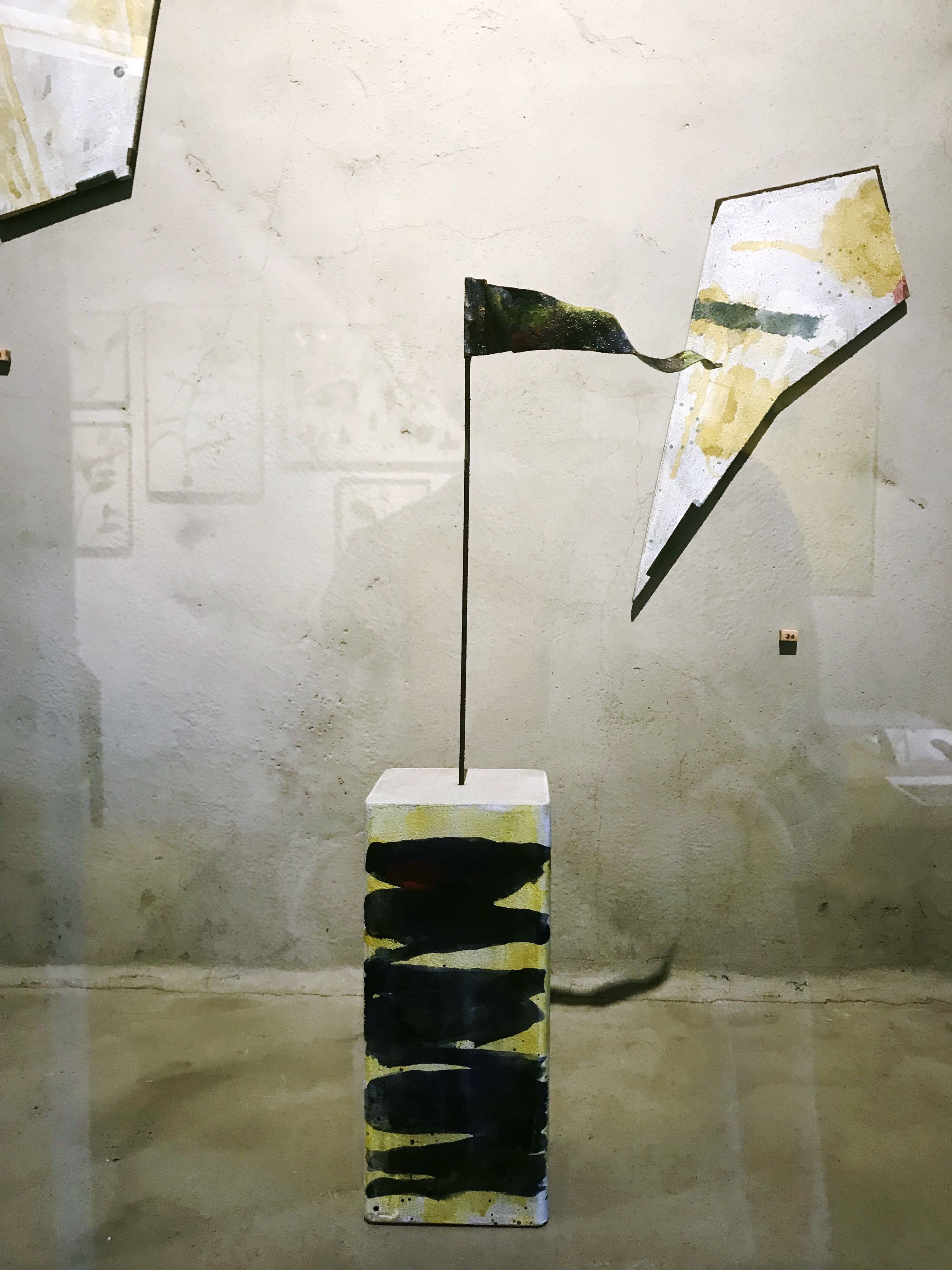 Especially the work of Mr. Takasato who stopped my legs for a long time. A mysterious colored flag like an aurora is swaying comfortably. It seems that there was a title given by the writer, but the phrase "the future is always breezy" came to me. There is a life with many goals, big and small. It makes me happy to think that there is a wind that accompanies each stage, not a strong wind or a headwind.

I gave this work to my son who became an examinee and tended to be a little naive.
And when I'm dented, I look at it and get an ale.

Opening day: Permanent exhibition on several days every month. An irregular exhibition. Check the website "next schedule" or "atelier gallery" for details.