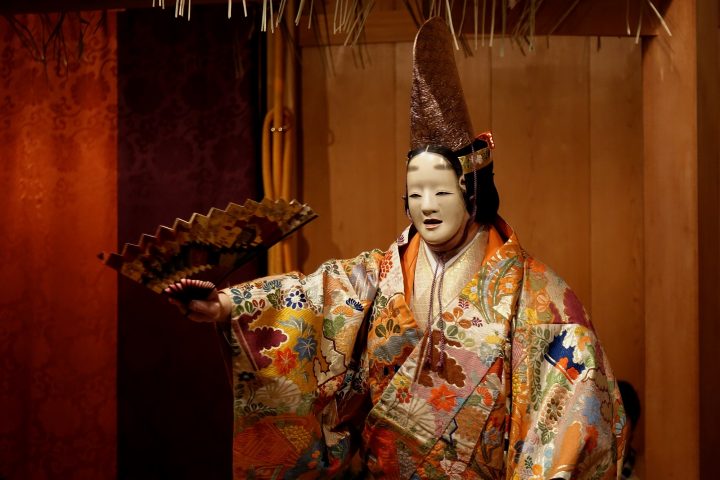 「"Shizuka, love and death-a creative stage by the fusion of Noh and opera-"」

A story based on "Minamoto no Yoshitsune Densetsu" will be staged in two parts, set in the ancient city of Kamakura, which is one of the best tourist areas in Kanagawa prefecture.
A digest version of the Noh play "Funa Benkei" and the second part of the opera "Shizuka to Yoshitsune".
The biggest highlight is that the first half of Noh and the second half of the opera "time" are connected.
The part where the parting of Shizuka Gozen and Yoshitsune is drawn is performed in the first half of Noh, and then the development is connected to the opera "Shizuka and Yoshitsune".
Noh and opera, which are completely different genres, become one stage, and the main character spins a story ... It is no exaggeration to say that this is all the reason why this stage is "fusion".

"The performing arts of Noh are pure and I hate to mix them, so it's a noble world where it's difficult to co-star with other genres. As a result of careful discussions on the fusion part, it was realized. "
Toru Sakakibara, the music chief of the Kanagawa Philharmonic Orchestra, who is the producer of this project, says.

"Funa Benkei" is a story created about 500 years ago based on the story of Heike and Azuma Kagami.
And "Shizuka to Yoshitsune" was produced by Minoru Miki, a composer who is acclaimed not only in Japan but also in Asia, as the opening of the Kamakura Arts Center in 1993. It is a Japanese opera that was performed.
この二つの物語が本公演でまさに「繋がっていく」わけですが、これがいかに貴重で価値のあることなのか、見どころを含めできる限り皆さんにお伝えしたいと思います。

邦楽器への注力は作曲のみならず、現代音楽に適した表現力を持つ箏として１３本の絃から２０本（後に２１本の新筝）となる二十絃箏の開発にまで及びI will.
This development was a very epoch-making thing that brought a new trend to the history of Japanese music and an innovation in Japanese musical instrument playing technology.
Mr. Miki's work skillfully incorporates not only Western sounds but also Japanese sounds from koto and various Japanese instruments, and is highly regarded both in Japan and overseas as an established style unique to Miki.

How about the opera "Shizuka and Yoshitsune" created by these two giants. It is a work with magnificent value that makes you tremble just by imagining it.

Kyoko Sunagawa, a soprano singer who represents Japan and is also the prima of the Japan Opera Association, plays the leading role, Shizuka. It is a must-see for the dramatic dance and singing of a white shirabyoshi, a woman, and a loved one.
And Akemi Yamada, who plays the 20th 絃 箏, is also a performer from the premiere. The performance of the koto, which overlaps perfectly among Western musical instruments and blends in, creates a unique Japanese world view.

As Mr. Nakashi said, the story of Shizuka and Yoshitsune's love is a beautiful and sophisticated day.It was an extremely tragic yet very delicate and life-like work with the language and music.

A creative stage where two people with the theme of "love and death" are spun together in one stage.

In the first half, "Funa Benkei," Yoshitsune escapes from his mistress, Minamoto no Yoritomo, with his beloved Shizuka Gozen. This extremely difficult journey cannot be overcome at last, and the two of them are finally in danger of parting at Odaiura. A powerful and ephemeral farewell dance that expresses the love and sadness of the two who must be separated. This dance connects the time to the second part, but this is the highlight. What kind of production do you connect with?

At the beginning, I told you that this connection, so to speak, the "fusion" part is the biggest attraction of this performance. If you talk about all the charms here, the fun will be halved, so let me give you a hint.
The two worlds are laid out by Shirabyoshi, which was inherited from Shizuka's mother, Iso no Zenji, and became an opportunity to love Yoshitsune. This is the identity of Shizuka in another world.

From the last farewell dance in the first half to the second part, the dance of Shizuka Hachimangu, I would like you to enjoy it.
Furthermore, the charm of this stage is that it is full of ingenuity that anyone can enjoy, such as this connection and the role of effectively carrying the digest version of the scene, so to speak, as a "story teller", with a narration by a Biwa player.

Even the highlight performances of the large hall are designed to be easy to understand, such as showing the performers on the sub-screen and complementing the story with subtitles to make it easier to understand the changes in the hero's emotions.

And finally the lighting. It is a very important element that gives time and light to the stage and expresses the space and characters more emotionally.

"Full lightingHowever, from the first part, we will design a witty light that is modern and follows this drama, rather than the classical solemn Noh. In particular, the second part depicts the beauty of Mt. Yoshino in winter, Tsurugaoka Hachimangu, which seems to be spring, and the stillness of ascending to heaven while fulfilling Yoshitsune again in the snow. "Mr. Sakakibara mentioned above.

This stage has been created across genres, countries, and times with the theme of "love and death," which is the most universal and eternal for humans, and especially for us living in the present.
Why don't you come and give your heart a wonderful nutrition in such an era?

Regarding "Shizuka, Ai to Death-Creative Stage by Fusion of Noh and Opera" (scheduled to be held on August 7, Reiwa 3), which was announced by a reporter on June 1, 1945, in the prefecture. In order to prevent the spread of the new coronavirus infection and to implement it in a safer and more secure environment, we will hold it without spectators and carry out live distribution (free of charge).