Around the land related to Kamakura-dono

There are many famous places and historic sites in Kanagawa prefecture.
The main place is Yokohama, which can be said to be a symbol of civilization, where the port was opened earliest in Japan, which was closed to the east at the end of the Edo period, and then the railroad was laid earliest. In the central part is Kamakura, the ancient capital of 1000, which is the beginning of samurai politics. In the west, Odawara, which was based on the Kanto champion and the famous Hojo clan during the Warring States period, and Hakone, a famous hot spring that has been spinning history since the Nara period. In addition to this, there are many famous places and historic sites in Kanagawa prefecture. I was wondering where to introduce its charm, but since the NHK Taiga drama in Reiwa 4 is "The 13 Lords of the Kamakura Hall", I would like to introduce the sightseeing spots in Kamakura related to them. 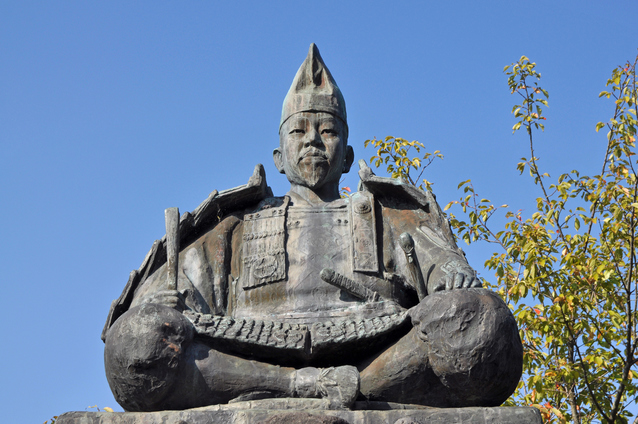 By the way, as many of you may know, "Kamakura-dono" is a shogun of the Kamakura Shogunate.
Minamoto no Yoritomo, who defeated the Heike army in the Battle of Fujigawa in 1180, set up his base in Kamakura, a place related to the Genji. Tsurugaoka Hachimangu was relocated to its current location, and the Okura Imperial Palace, where he lived, and the "Samurai-dokoro", which controls military and police functions, were set up, and Yoritomo became known as "Kamakura-dono."

The full-scale relationship between Genji and Kamakura begins with the construction of this Yawata. Kawachi Genji's ancestor, Minamoto no Yoriyoshi, moved to Iwashimizu Hachiman in Kyoto in 1063 as a thank-you for the victory of the role of the previous nine years. This is Yui Wakamiya. At that time, it is said that the area in front of Yawata was a coastline, but now it is a residential area and stands quietly.
r: # 20b2aa; "> ⫯ 1-7 Zaimokuza, Kamakura City, Kanagawa Prefecture

(Image: From TokyoDayTrip Kanagawa Travel Info)
In 1180, Minamoto no Yoritomo, based in Kamakura, immediately visited Yui Hachiman and moved the palace to Kitayama, Kobayashi-go, inland. This is the current Tsurugaoka Hachimangu Shrine. Tsurugaoka Hachimangu is a place that has been revered not only as Genji but also as a guardian deity of Bando warriors, and is also a place where Shizugozen thought of Minamoto no Yoshitsune and danced. It is also the place where General Genji was cut off after being attacked by the war, and it is a spot that is deeply related to the history of Kamakura.
⫯ 2-1-31 Yukinoshita, Kamakura City, Kanagawa Prefecture
* Speaking of Shizuka Gozen, please also see the live performance "Shizuka, Love and Death" that was broadcast live on August 7, 3rd year of Reiwa!
Related page: Click here
Video: Click here

Spot 3 Wakamiya Oji (Dankazura)
"height =" 426 "class =" aligncenter size-full wp-image-261837 "/>
Wakamiya Oji extends straight from Tsurugaoka Hachimangu to Yuigahama. It is said that Minamoto no Yoritomo was created in 1182 with reference to Suzaku Oji in Kyoto, and Yoritomo intended to build Kamakura around this Wakamiya Oji. I am. The most distinctive feature of Wakamiya Oji is the passage called Dankazura, which is raised by one step of stone steps. It is said that it was made to pray for the safe delivery of Yoritomo's wife, Masako Hojo, who was pregnant at the time, or to improve its convenience because it was difficult to walk due to the inflow of earth and sand and water due to rain. .. At that time, it was a large-scale building that was laid for about 1300 meters from the head of Tsurugaoka Hachimangu to the first torii gate. (The existing one is about 480 meters)
⫯ Near 4 Onarimachi, Kamakura City, Kanagawa Prefecture

Spot 4 Okura Gosho (Okura Shogunate)
Minamoto no Yoritomo, who entered Kamakura, settled in the land of Okura and began to take office in this land. Therefore, this place was later called Okura Gosho (Okura Shogunate). It is said that Yoritomo's ancestor, Minamoto no Yoshiie, once settled in this area, and that Yoritomo built a palace here. A samurai-dokoro has also been set up in this area, and Yoshimori Wada, one of the thirteen people, became a betto (secretary), and the rule centered on this area began. Around the Imperial Palace, there were mansions of leading gokenins such as Shigetada Hatakeyama, Yoshimura Miura (a child of Yoshizumi Miura, one of the thirteen people), and Yoshimori Wada, who were defending.
⫯ 3-chome Yukinoshita, Kamakura City, Kanagawa Prefecture

Spot 5 Houkado Ruins (Tomb of Minamoto no Yoritomo)
igncenter size-full wp-image-261838 "/>
Minamoto no Yoritomo participated in the inauguration ceremony of the bridge over the Sagami River as a memorial service for his late wife, Shigenari Inage, and fell in Inamuragasaki on his way home. It is said that he died. The cause of death is not described in Azuma Kagami, and it is a mystery whose details are unknown. The current tombstone was built by Shimazu Shigehide during the Edo period. The site of Houkado is designated as a historic site, and in addition to the tomb of Yoritomo, the tomb of Hojo Yoshitoki, one of the thirteen people, also exists in the same area.
⫯ 2-chome Nishimikado, Kamakura City, Kanagawa

In Kanagawa prefecture, there are many places related to Minamoto no Yoritomo other than the places introduced above, so I will introduce them again next time.