A journey of mind begins in rich colors

When I visited a cafe last year, I was attracted to the postcards at the counter.
It is a modern landscape painting with vivid colors. The depiction was simple, but he felt light, smelled of earth and grass, and heard the voices of undrawn figures, birds and insects.
I'm drawn into the world of a postcard-sized picture! I was impressed and bought several kinds of cards and went home.
Normally I would look up the writer's name there, but it was more important for me to immerse in that comfort than to who drew it, and I kept the card on the shelf. 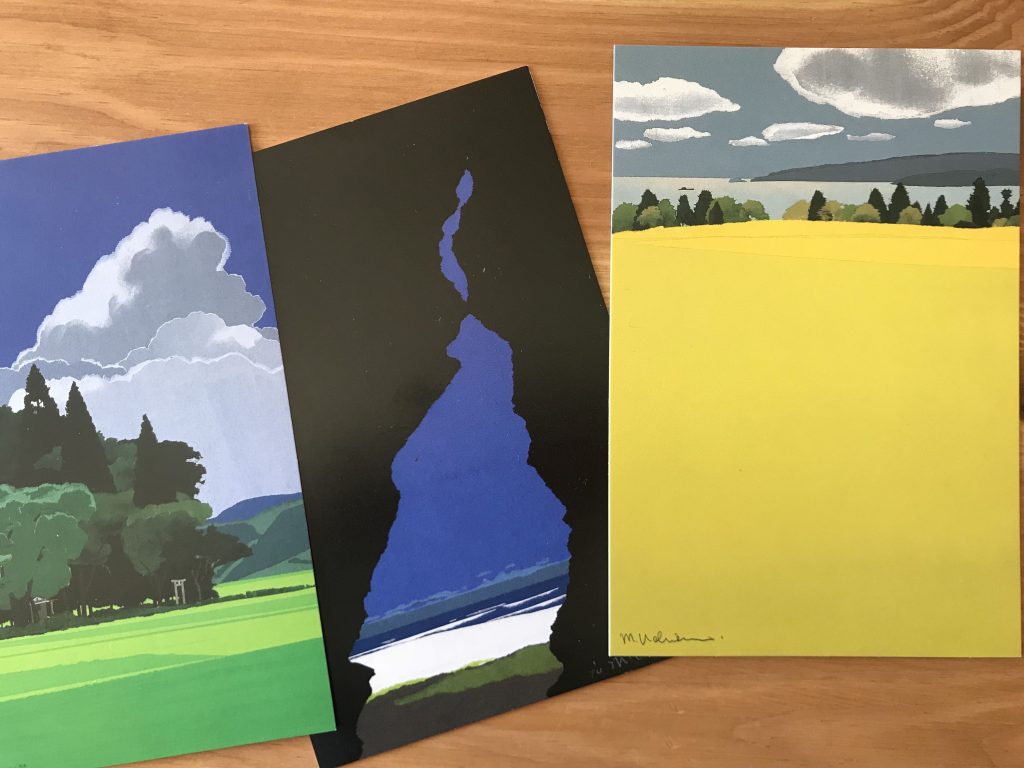 By the way, almost a year later, when I was surfing the net, a picture came into view by chance.

"Huh? There's something that goes with my card ..."

And for the first time, I knew it was a picture of Masayasu Uchida. Mr. Uchida is 96 years old!

We also know that there is an art gallery in Kamakura, and we must go there! And good hurry. 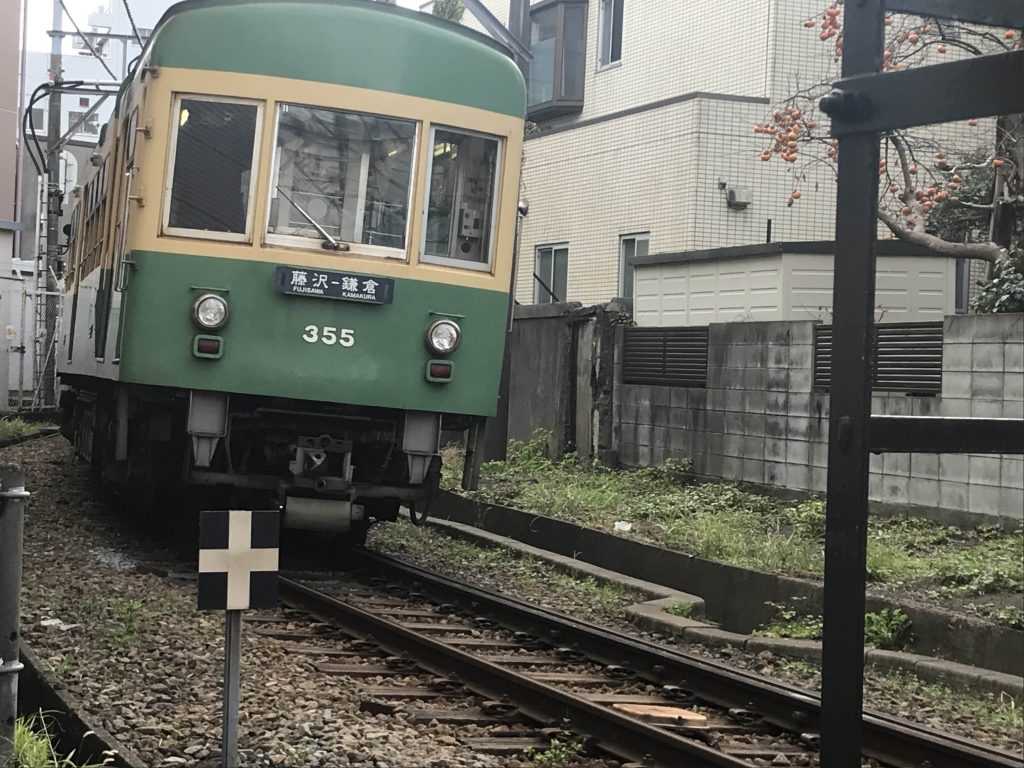 The nearest station to the gallery is Hase Station on Enoden. If you go to Kamakura or Shonan, it is almost a car,Actually, it is the first experience to ride Enoden. 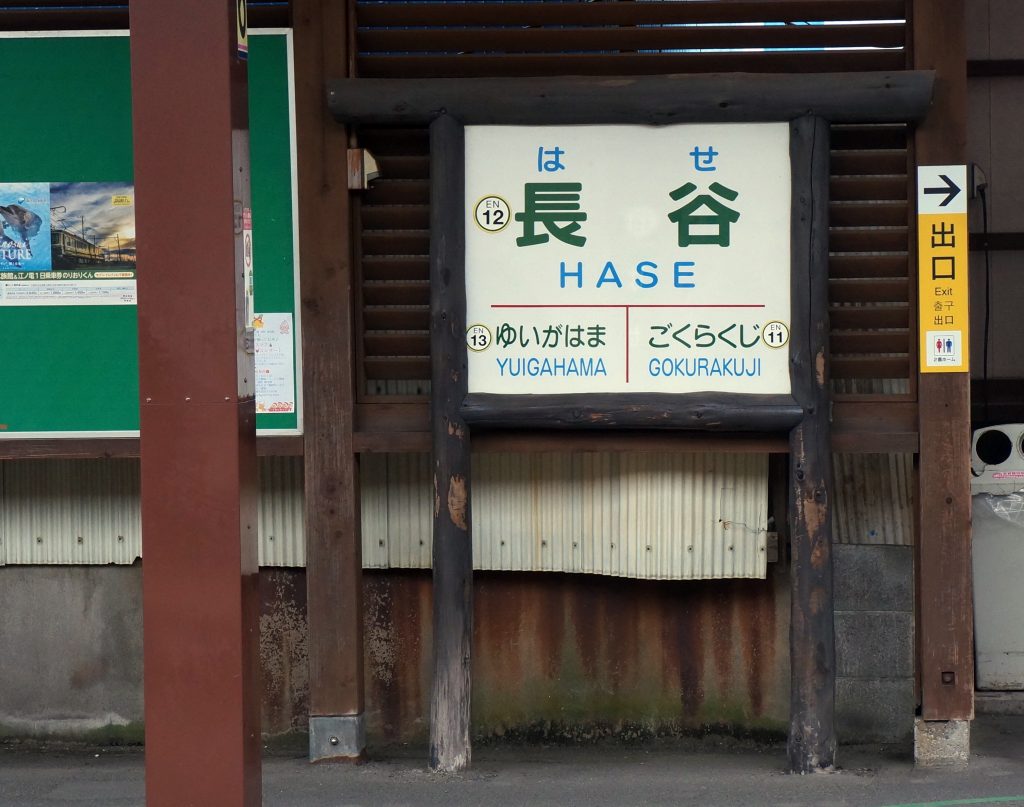 While touching the loose charm of the local line, which has a history of more than 100 years, I was a bit nervous thinking about the gallery I visited.
Because he also works as an atelier, he might see his teacher. 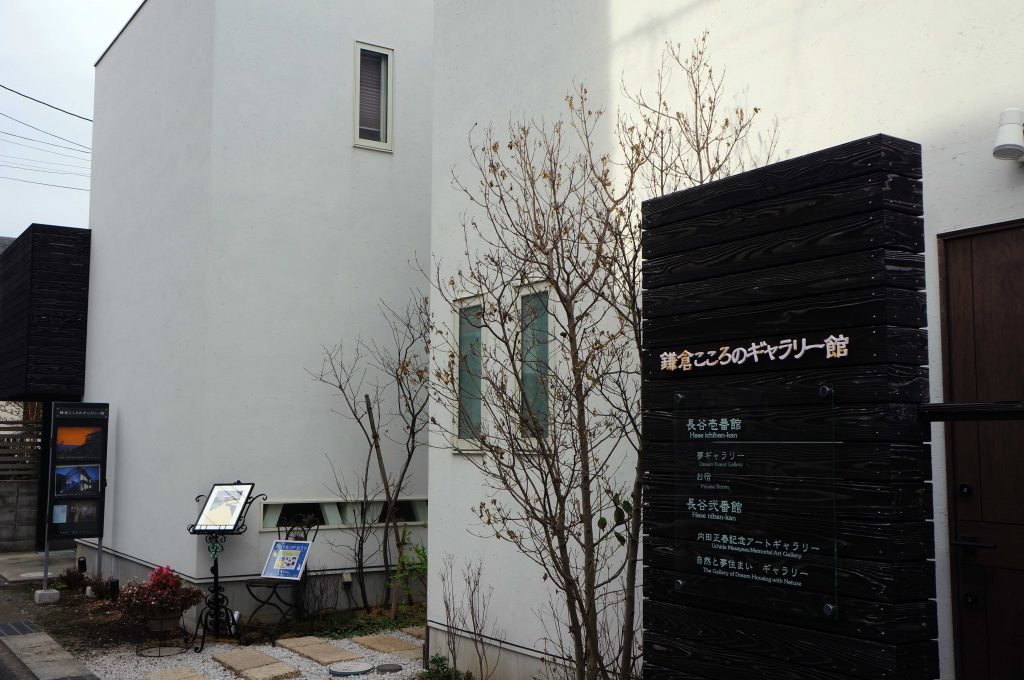 A modern white building less than one minute walk from the station. There is "Kamakura Kokoro Gallery Hall". The second building on that corner is the "Masasuyasu Uchida Memorial Art Gallery".
Immediately upon entering, the impact of vivid colors. Looking at them one by one, the scenery of rice ears dyed in gold and the scenery of Manchusha flower with impressive red color were the scenes that just make you feel the autumn this time.
One of the reasons I am attracted is the bold composition of the sky and rice fields that make up more than half of the screen. Very modern. 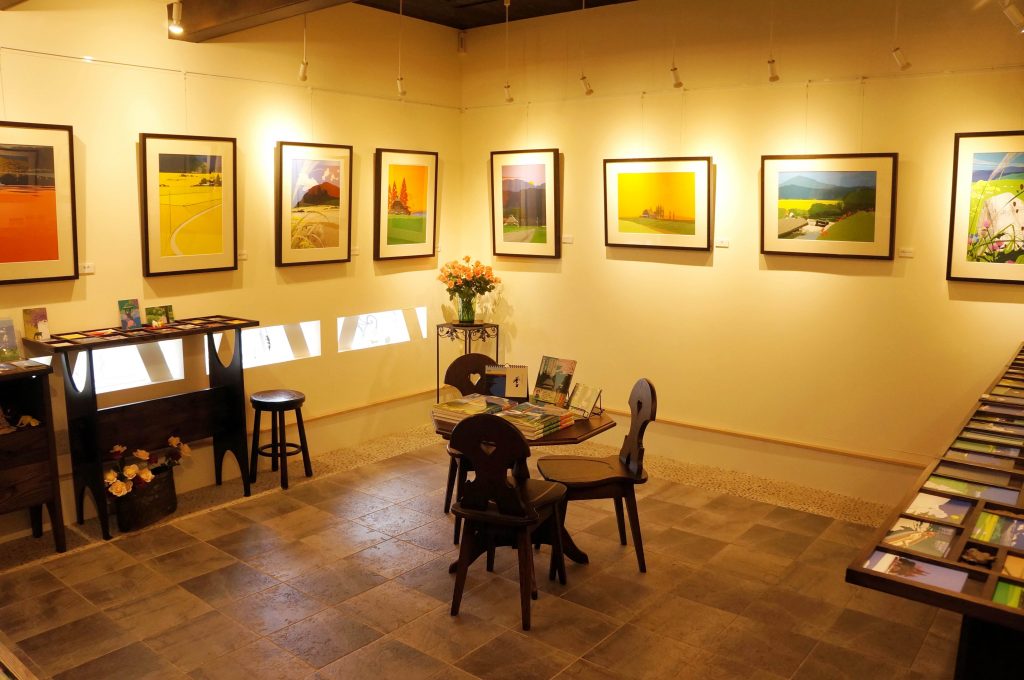 Uchida-sensei's work was not noticed in the postcard, but it was actually Hare-e.
The nuances of depth and texture due to the overlapping of colors are combined with the painting, and the five senses of the viewer begin to work unnecessarily, wrapping it in a sense closer to the bodily sensation.

The gallery was managed by Mr. and Mrs. Mitsu, the son of Mr. Uchida, and he explained carefully. Unfortunately the teacher is absent .

In the beam picture, soft lines make up the expression, so they do not use scissors, cut paper by hand and paste it with glue. We have more than 100 types of paper with different colors and thicknesses. He is particular about Western paper because of the vividness of colors. Although the texture of Japanese paper is also tasteful, the teacher has to say that fuzzy nuances such as pale colors and fluffing when torn are not the expressions I want. And it wasn't a torn picture or a cut-out picture, but the world of "hare picture" was established. 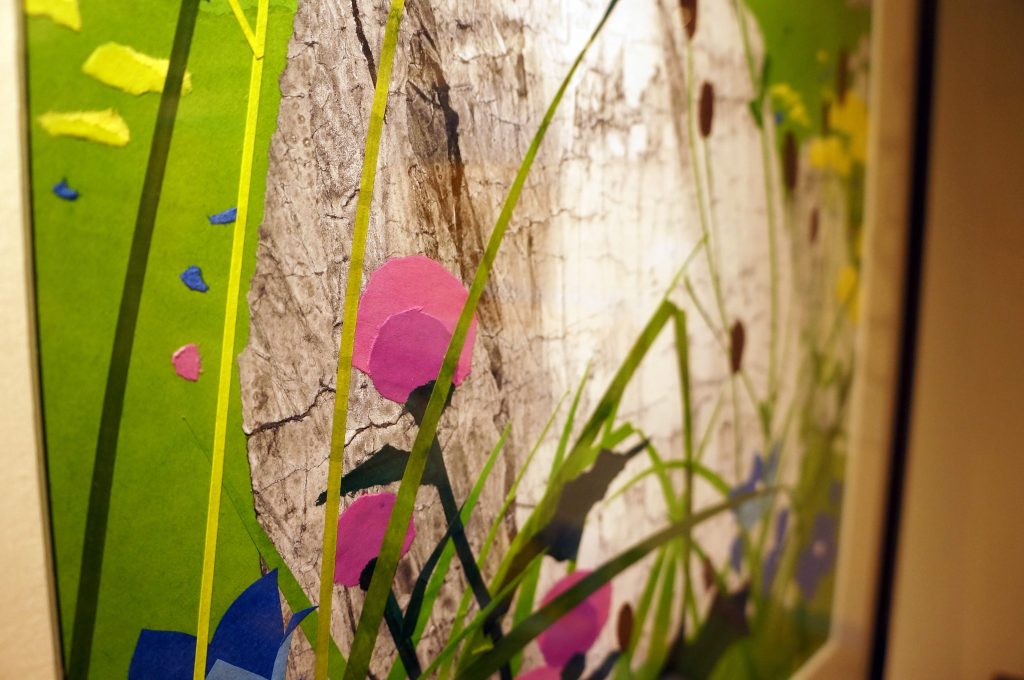 The wrinkled paper was rubbed with kushikushi before pasting, and the ink was partially absorbed, creating shadows, and the rock texture was impressive. Also, nuances that are not in the paper at hand are often brushed before putting them on. 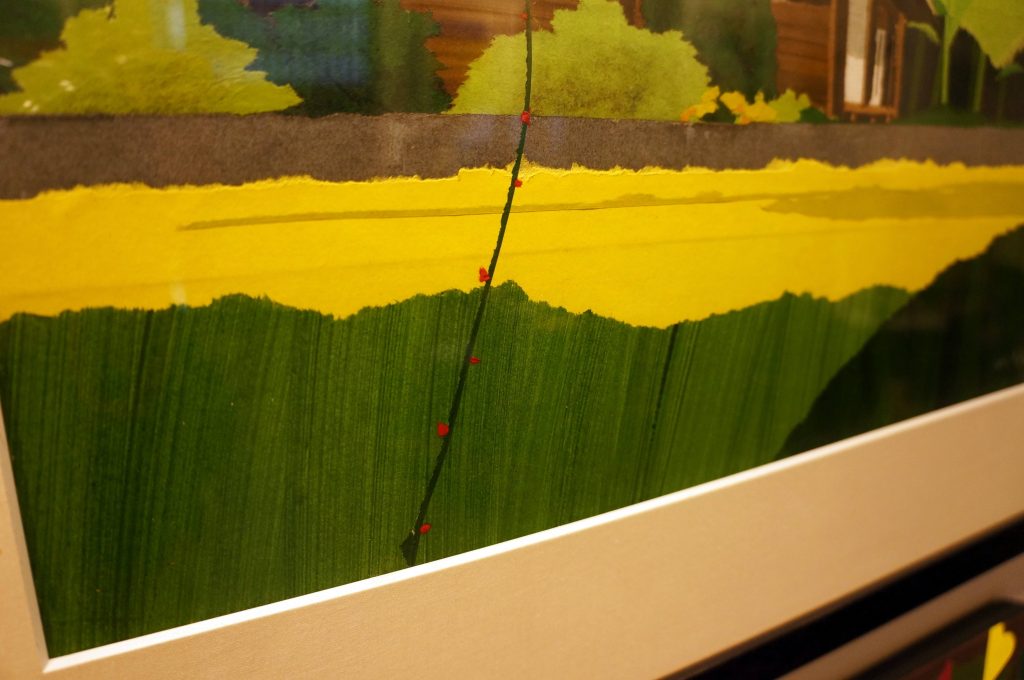 Uchida-sensei was a graphic designer. When I was in my thirties, a request from a resident Yokohama City to teach art to the general public at an adult school (now a culture school). After thinking about the lack of a budget and cutting newspapers to show the shape, he later decided to explore ways to express the original landscape of Japan with "Hari-e". As a matter of fact, the instant miso soup "Asage" and "Yuuge" that we all know are our masterpieces. Oh, I was touching my teacher's picture since I was little!

After saying "Welcome," he said, "There are autumn leaves both in Japan and abroad, everyone is impressed with the beauty. But a single leaf falls down. The words and sounds are born of the Japanese people. It's a delicate sensitivity.
The earth is one of the cosmic debris, and human beings are just one of the microbes. What does that person feel in Mother Nature? `` I've been painting a lot of landscapes for many years, and by drawing that feeling, I'm continuing to convey sensibilities that should not be forgotten for children and their future. ''

The teacher is strong and continues to speak.

"For example, when a large stage filled with tens of thousands of people suddenly goes black, everyone lights up at last when one light is turned on. Why is it? What is there? It's a feeling that you can feel. ''

Then, look at my face and say, "I'll do my best, too." That's right, the teacher went into the atelier.

It is not that simple, with beautiful colors and beautiful scenery. It touches the deeper parts of our roots and reminds us of an important sense.
Sensitivity that I caught with some sort of bodily sensation. Although I usually forget it, I immediately access that memory. It was the moment I understood why I was attracted to my teacher's postcard.
The teacher's delicate and dynamic paintings never really let the viewers get bored.
The common feature of the 900-piece work is where the heart is. From the teacher's beam picture, kindness was overflowing. 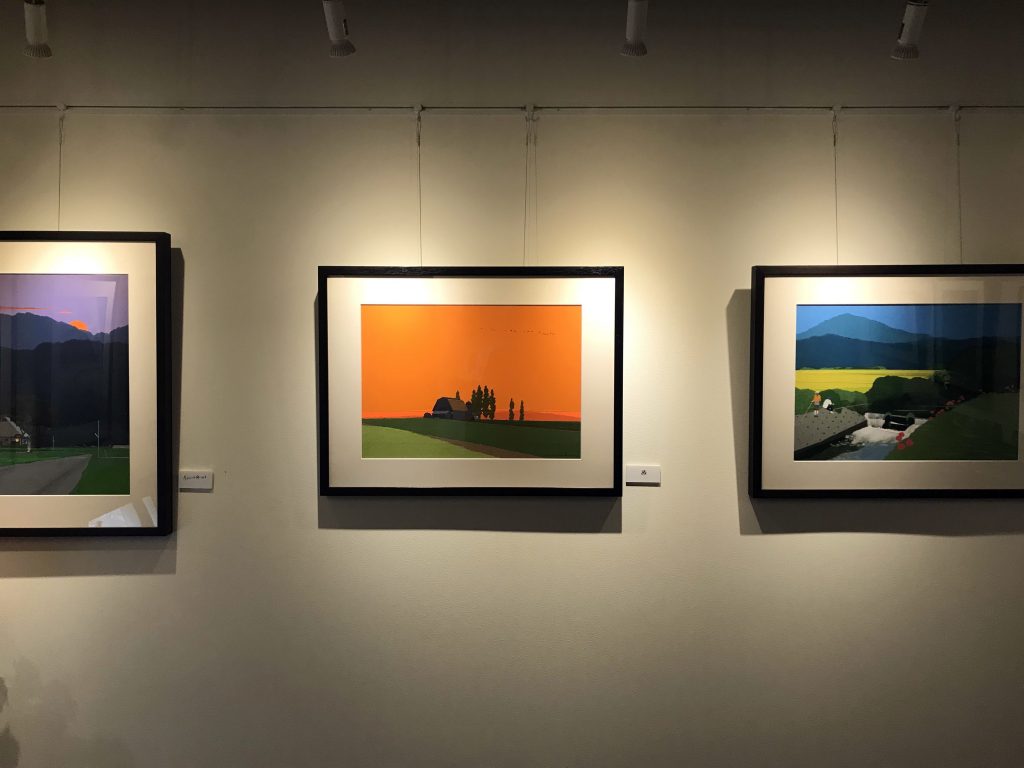 Here, the exhibitions are changed about once every two months, valuing the four seasons.

It's a daily life that is often overwhelmed by timeThis is a gallery that I want to visit many times to reconfirm my axis. 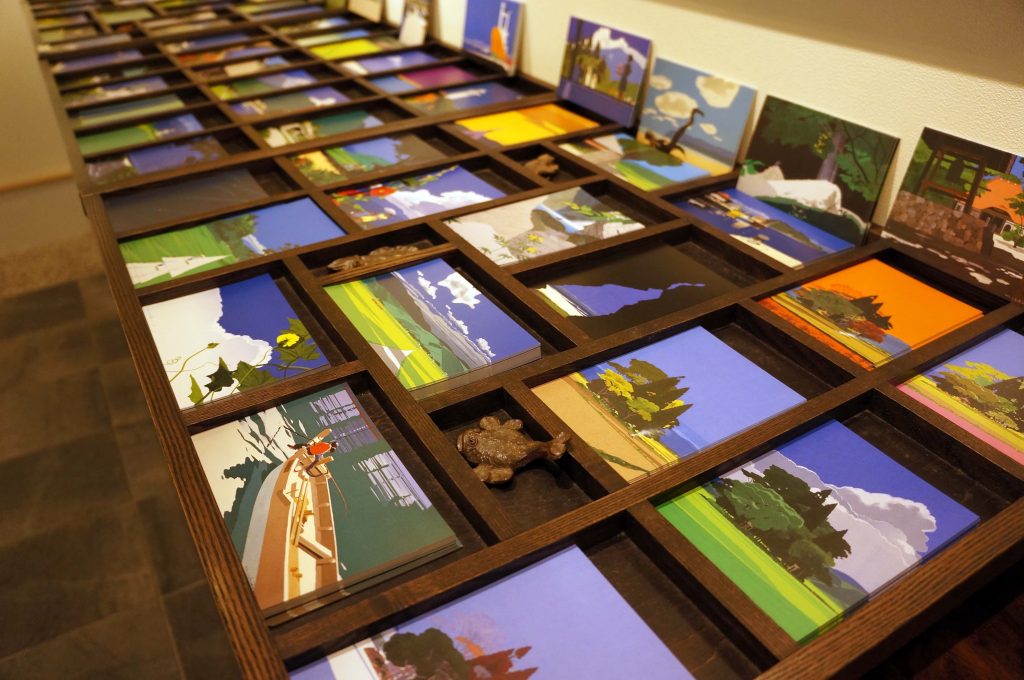