The world of art that you can go, see, and feel
File.7 Yokohama Museum of Art "Tetsuro Komai-The Glittering Universe" Related Event "When Words Are Born from Pictures"
Miyuki Inoue (copywriter)

Tetsuro Komai is one of the pioneers who made the Japanese art world aware of new print expressions and their appeal through copperplate prints. However, personally, I am interested in the cross-genre activity called "Experimental Studio" in which Komai participated. When I heard that various talents such as composers, critics, illuminators, photographers, engineers, and visual artists had gathered, I was excited to say, "It's like Ballets Russes!" 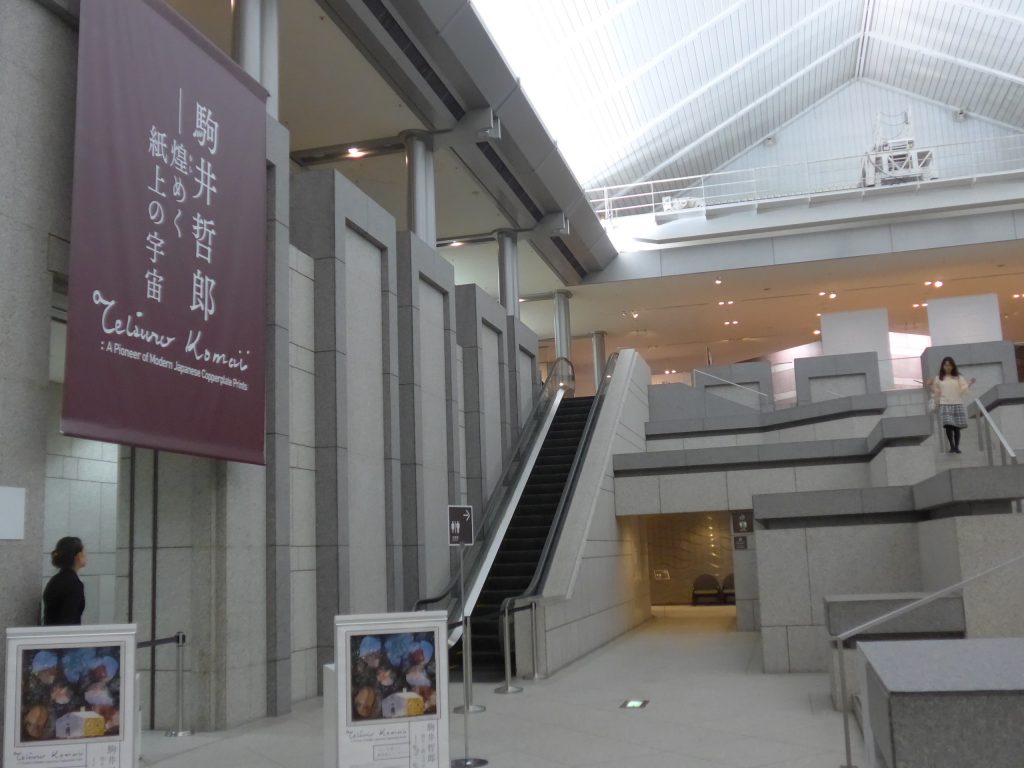 Ballets Russes, who was active mainly in Paris at the beginning of the 20th century, is a talented pot where ballet dancer Nijinsky, Kokuto, Sati, Picasso, Laurentan, Coco Chanel, etc. gathered. There was such a wonderful avant-garde activity in Japan!
On Saturday, November 10th, a related event was held inviting the poet Yumi Fuzuki as a guest, so I wanted to experience the world of art that transcends genres, so I went out.

Exhibition visited before the eventThe first thing that caught my eye in the room was the portrait of Tetsuro Komai. Excuse me, what a nice man!
Born in Nihonbashi, Chuo-ku in 1920 (Taisho 9), he entered the Tokyo Fine Arts School (currently Tokyo University of the Arts) after passing through middle and high schools from Keio Kindergarten. A splendid profile. When he was teaching at university, he was careful about his clothes, saying, "White shirt, dark blue suit, and tie." I wonder if the freedom of the work and the kind of unrestrainedness are not unrelated to the birth and growth of the artist. 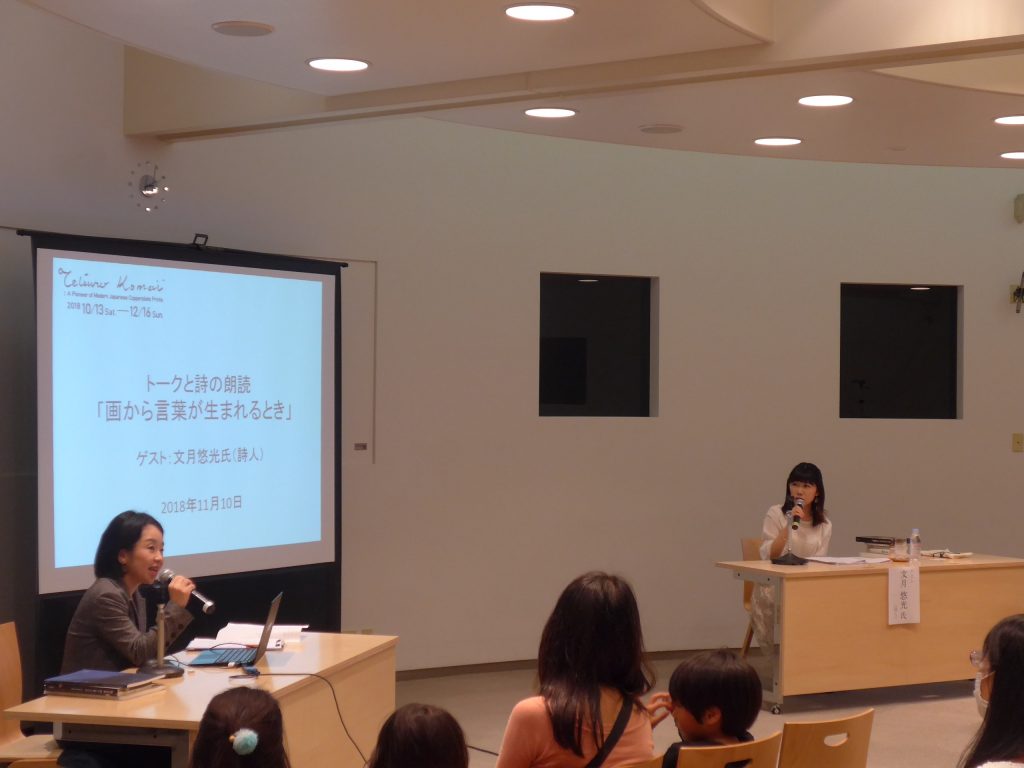 Then, the talk and poetry reading "When words are born from pictures" begins.
"Because I'm a poet, it's rare to be invited to an event at a museum," says Fumizuki. Having said that, since he belonged to junior high school, high school and the art club, he has a deep knowledge of the world of art, and he carefully selects words to connect with each other.

The specially-equipped book "Black Horse in the Darkness" on display is a collection of short stories by Yutaka Haniya, and is a "work" illustrated by Komai. Komai, who received a request from Haniya, has carefully read the novel and then visualized the world view.
While saying, "I didn't know the name Tetsuro Komai," it seems that "black horses in the darkness" were lined up on Mr. Fumizuki's bookshelf.
"It's not a specially equipped book, but I found it at an antiquarian bookstore when I was a student and bought it by chance."
Although the genre is different, was there a connection between talent and talent?
18/11 / P1090120-1024x768.jpg "alt =" "width =" 1024 "height =" 768 "/>

Komai learned the technique by himself because there was no tradition of copperplate engraving in Japan. There is no workshop because of the new genre, that is, there are no craftsmen. For this reason, Komai himself used a press to publish the poetry book "Mardrool's Song" and printed more than 2000 pictures for the publication of 350 copies. The perfect balance of poetry and painting seems to be related to the fact that the painters "handmade" each book.

After that, the talk with the curator and the reading of the poem continued, and I felt that the distance between Mr. Fumizuki and Tetsuro Komai was getting closer. 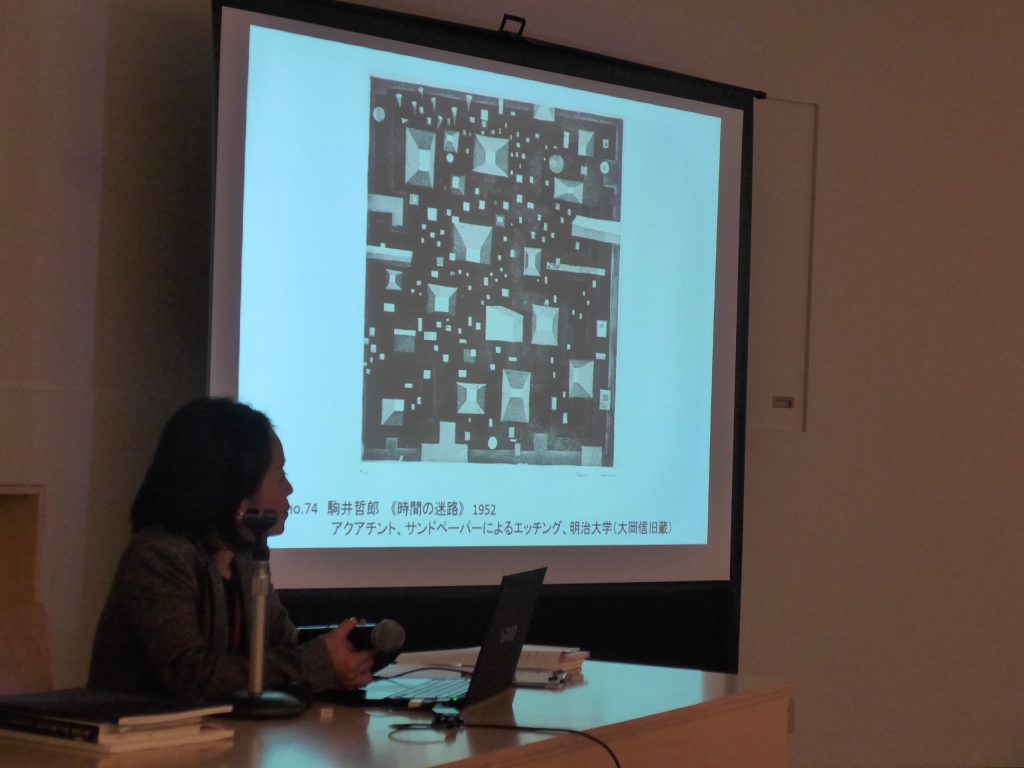 The last Komai work selected by Mr. Fumizuki is "The Maze of Time" (1952).
He wrote a new poem for this picture and read it aloud himself.
Komai's text recorded in the catalog of the special exhibition is woven into the poem. There is such a way to enjoy poetry, and I feel that the threshold has become a little lower.

In the question and answer session, I would like to introduce one theme that interests me.

Q Is there a cross-genre exchange like Komai in the same generation as Mr. Fumizuki?
e = "color: # 800080;"> A I think it's wonderful that copperplate prints have been established as a genre, but I feel a little lonely because I feel like I've become a distance from other genres. I think it's amazing that the power to create new things that transcend genres, such as "Experimental Studio", and the poetry art book published in that exchange are still being looked back on after more than 50 years. increase.
I myself would like to collaborate with the works of writers and painters who have already died, without limiting generations.

After the event, the exhibition-limited menu "Monochrome Vanilla Cafe Mocha" will be held at Café Ogurayama in the museum. Mix and melt the crispy chocolate on top of the cream.
The taste of Paris that Komai longed for?
A symbol of Komai who continued to produce esprit works while interacting with poets and musicians?
For the time being, I felt that it suits the deepening autumn scenery.