Kanagawa Prefectural Ongakudo—commonly known as “wood hall”.
I don't think anyone who is a classical music fan doesn't know, but the architectural boom has added new fans these days.
Designed by Kunio Maekawa. Yes, he is one of the leading architects in Japan who studied under the architect master Le Corbusier.
Aside from the difficulties, it's stylish and cool anyway!
We celebrated the 65th anniversary of the museum's opening and renewal opening, and heard that a “Maekawa Architecture Tour” was taking place. 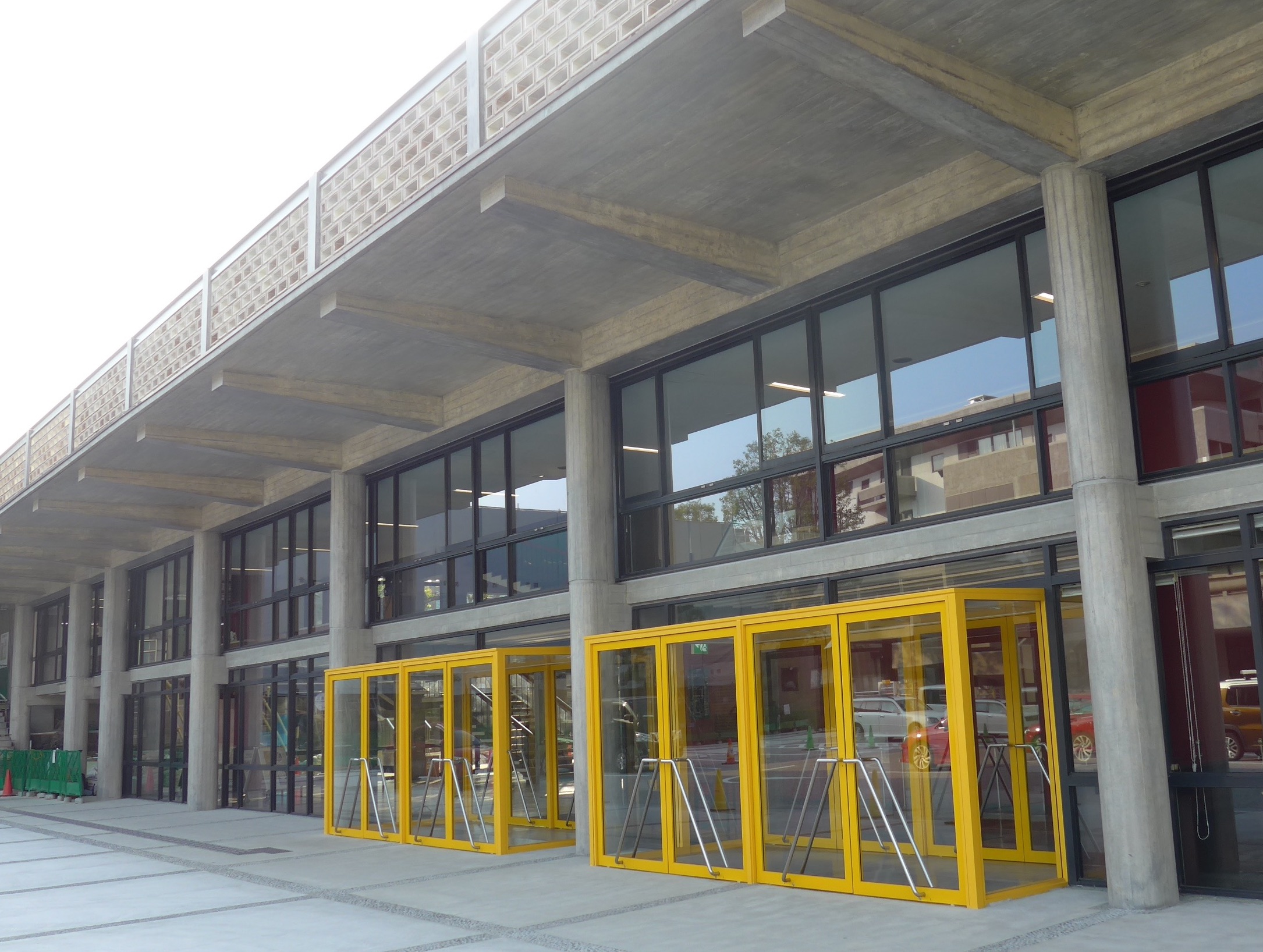 First of all, from the entrance where the yellow frame is impressive.
The balcony wall is “Holobrick”, which is the same as the neighboring prefectural library. It seems to be an excellent design in terms of functionality, but the reason we adopted it in the music hall is probably because of the uniformity of the design. So, check out last year's report for details.
* Click here for the report of the library building tour >> 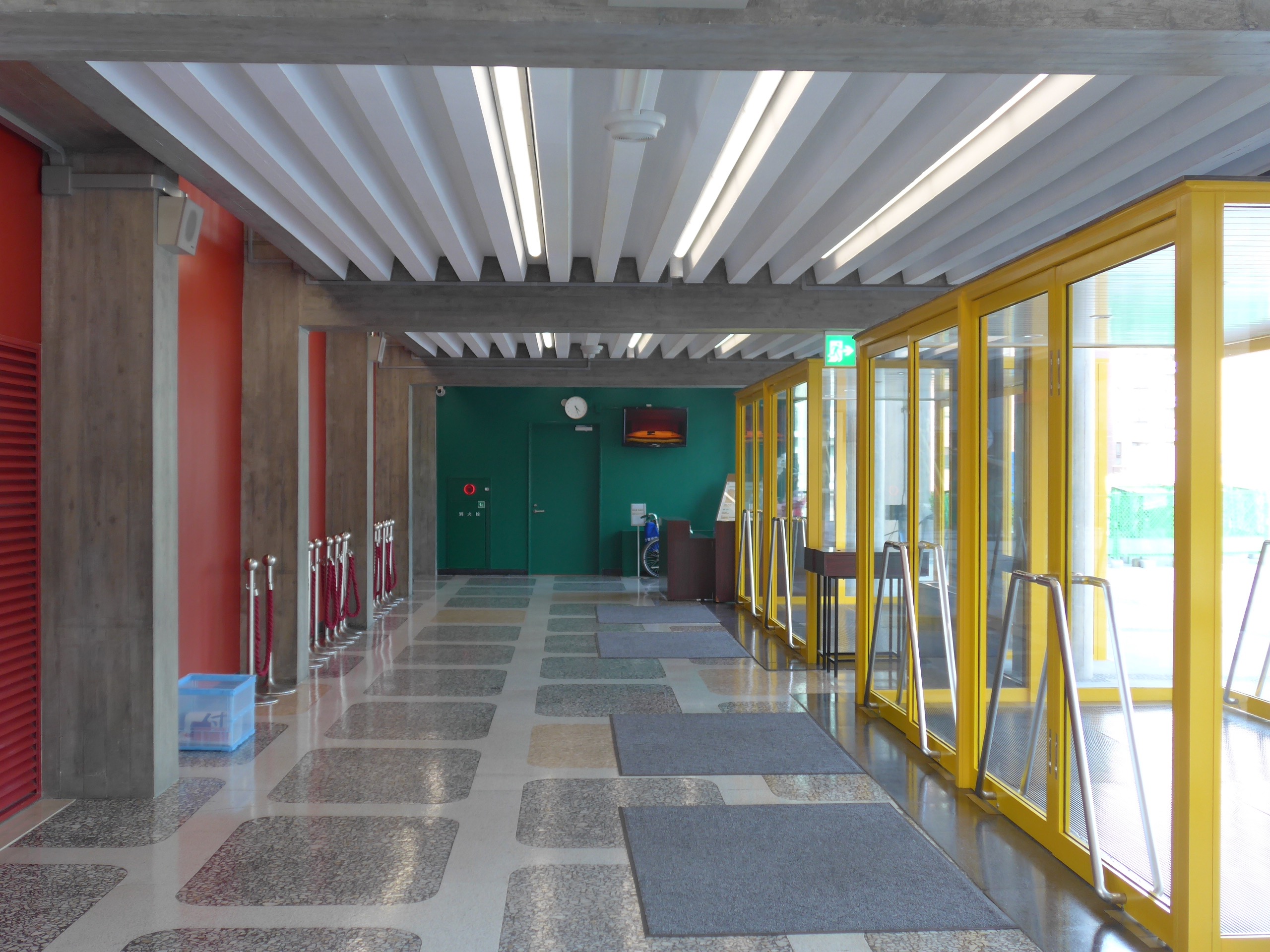 The color of Maekawa You can see at a glance the inside of the entrance. Maekawa nodded greatly at the anecdote that he was particular about color, as he said, "I wanted to be a paint shop if I did not become an architect."
Although it is not a spacious space, the gorgeous and impactful use of colors will excite the mood, so it may be a design suitable for the entrance of the music hall. 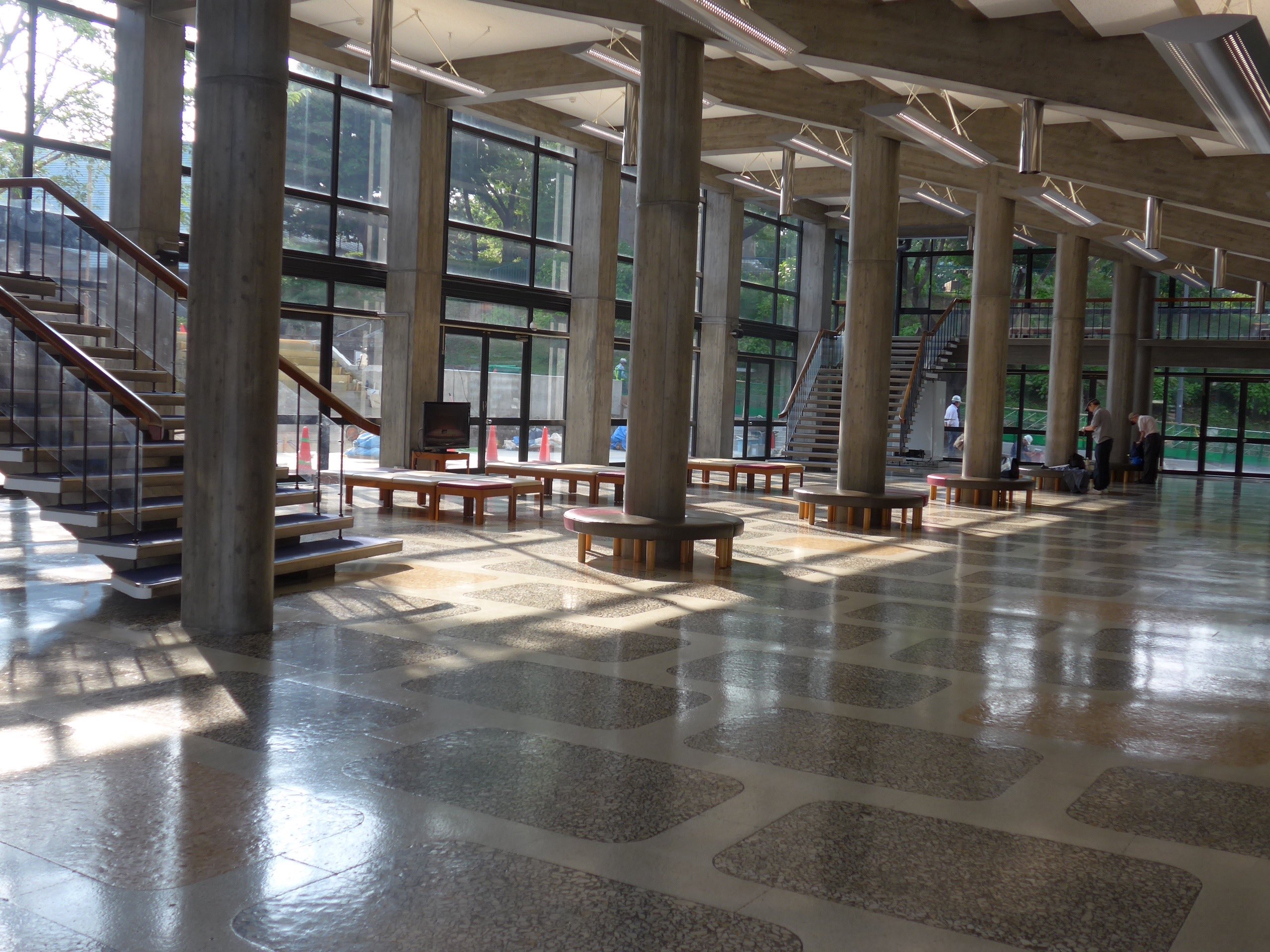 The bright and open foyer feels like the Maekawa architecture.
The pillars that rise in order are elegance and elegant, although they are made of concrete. If you look closely, it has a grain, but this is because it is made by pouring concrete by hand into a frame made of wooden boards. From now on, it is a super analog method, but concrete at this time seems to be much stronger and more beautiful than it is today.
The floor is called “Terrazzo (artificial stone sharpening)”, which is also a handcrafted construction method, but it does not deteriorate even after 65 years. 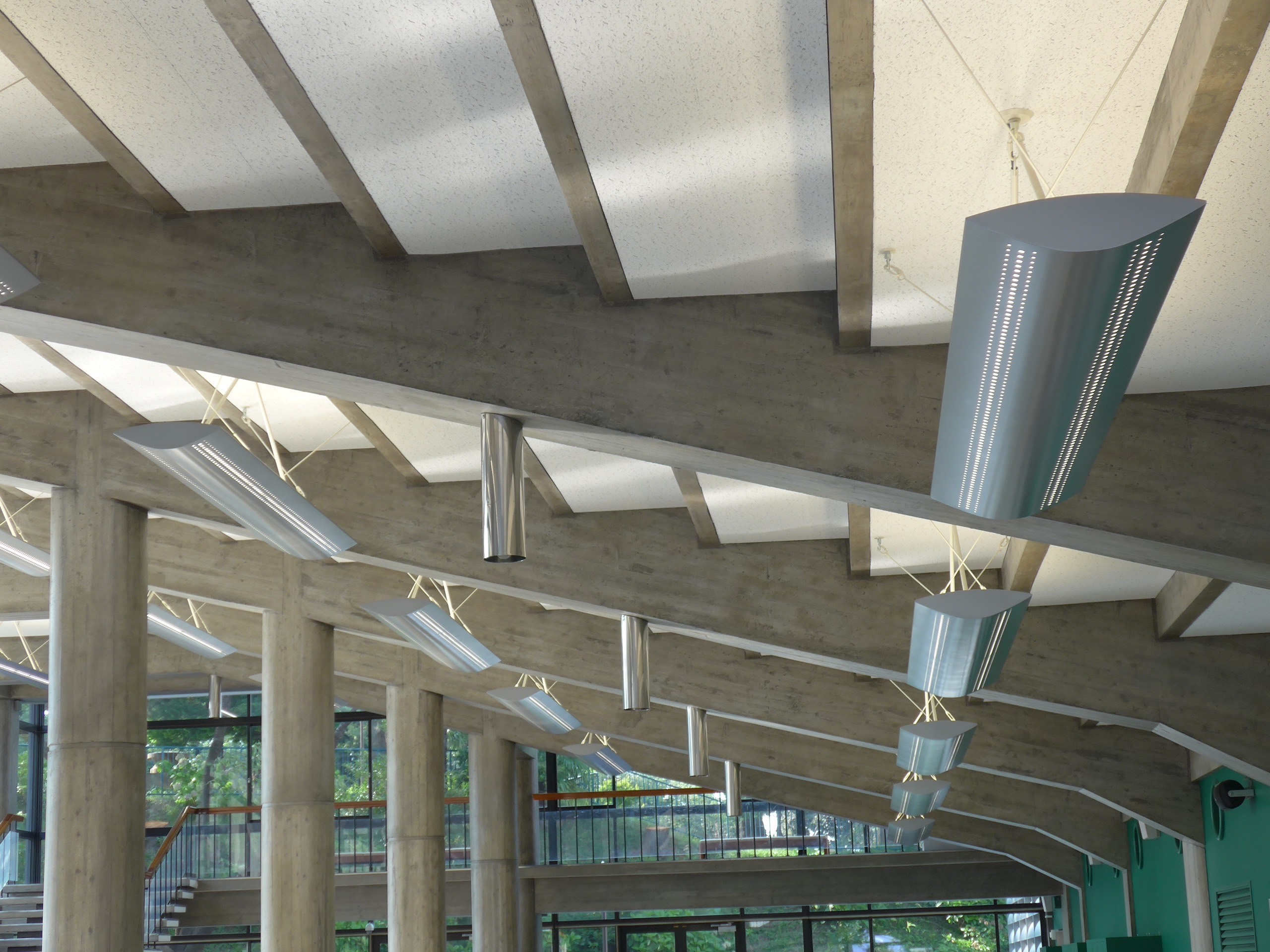 The renovation took place over a year and two months from last year to restore the beautifully restored music hall, but the concept was "to return to what it was 65 years ago." So, the lighting fixtures are as they were when they were founded. However, since the light source has been changed to LEDs, consideration for the environment is indispensable.
By the way, the reason why the ceiling rattles like stairs is because there is a seat just above. It has a gentle staircase shape to match the slope of the second floor seats.
ini.jpg "alt =" "width =" 2560 "height =" 1920 "/>

So into the hall.
The concert hall was designed around the Royal Festival Hall in London. Although the scale is quite small, it is nice to be able to see the stage from any seat because it is always a corrugated floor from the front row to the last row.
According to Seiko Ishikawa, who was in charge of the sound design, there is no merit in the balconies such as the second floor balcony. 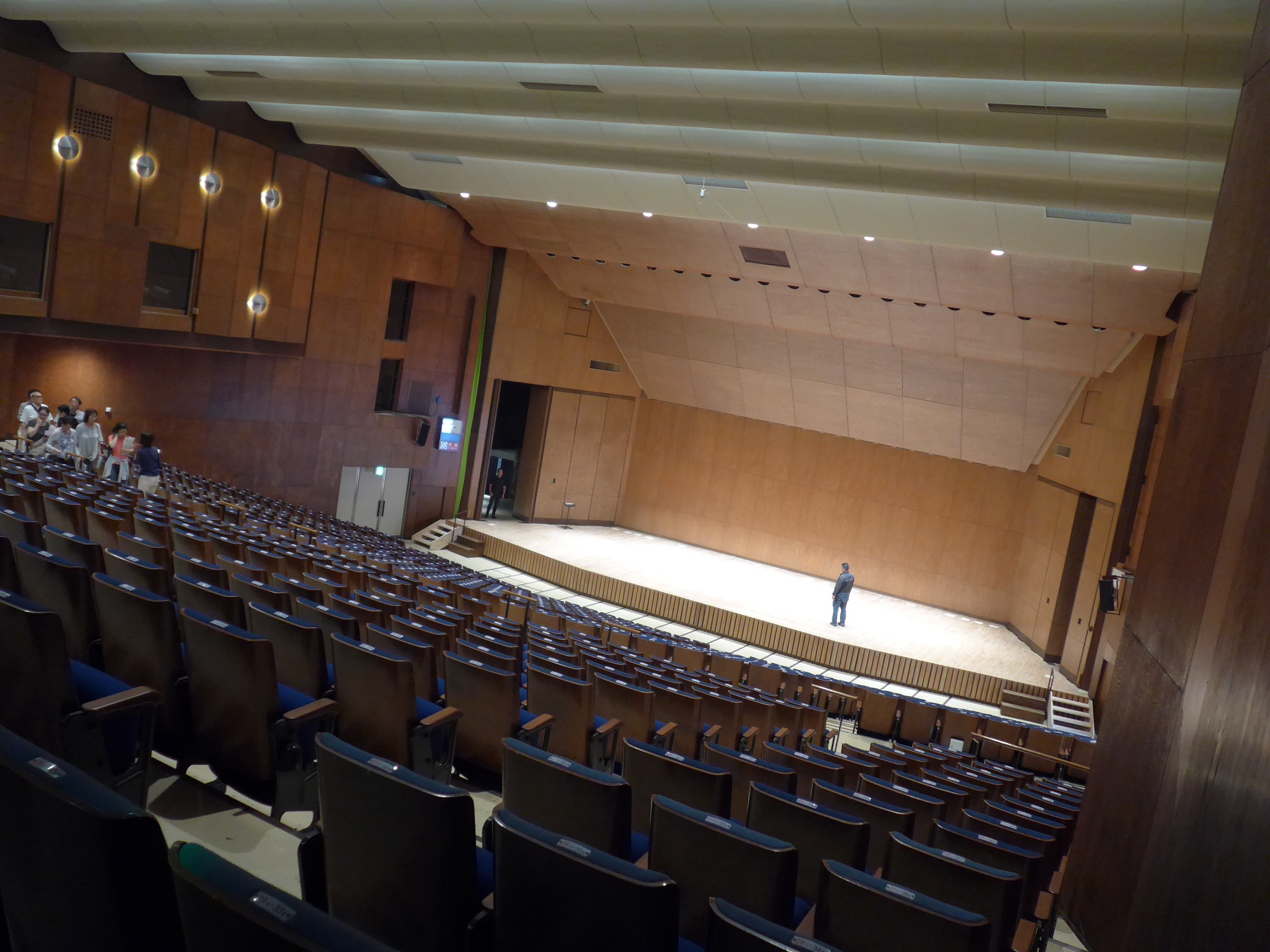 As can be seen from the nickname of "Wooden Hall," the walls and ceiling of the audience seat, including the reverberation board on the stage, are all made of wood. Ceilings waving like waves are of course wooden.
It seems that it was difficult only in the early days after the war to choose options other than `` tree '', but with careful consideration and ingenuity, the result was a sound that was praised by musicians around the world as `` the best sound of the East '' So great. 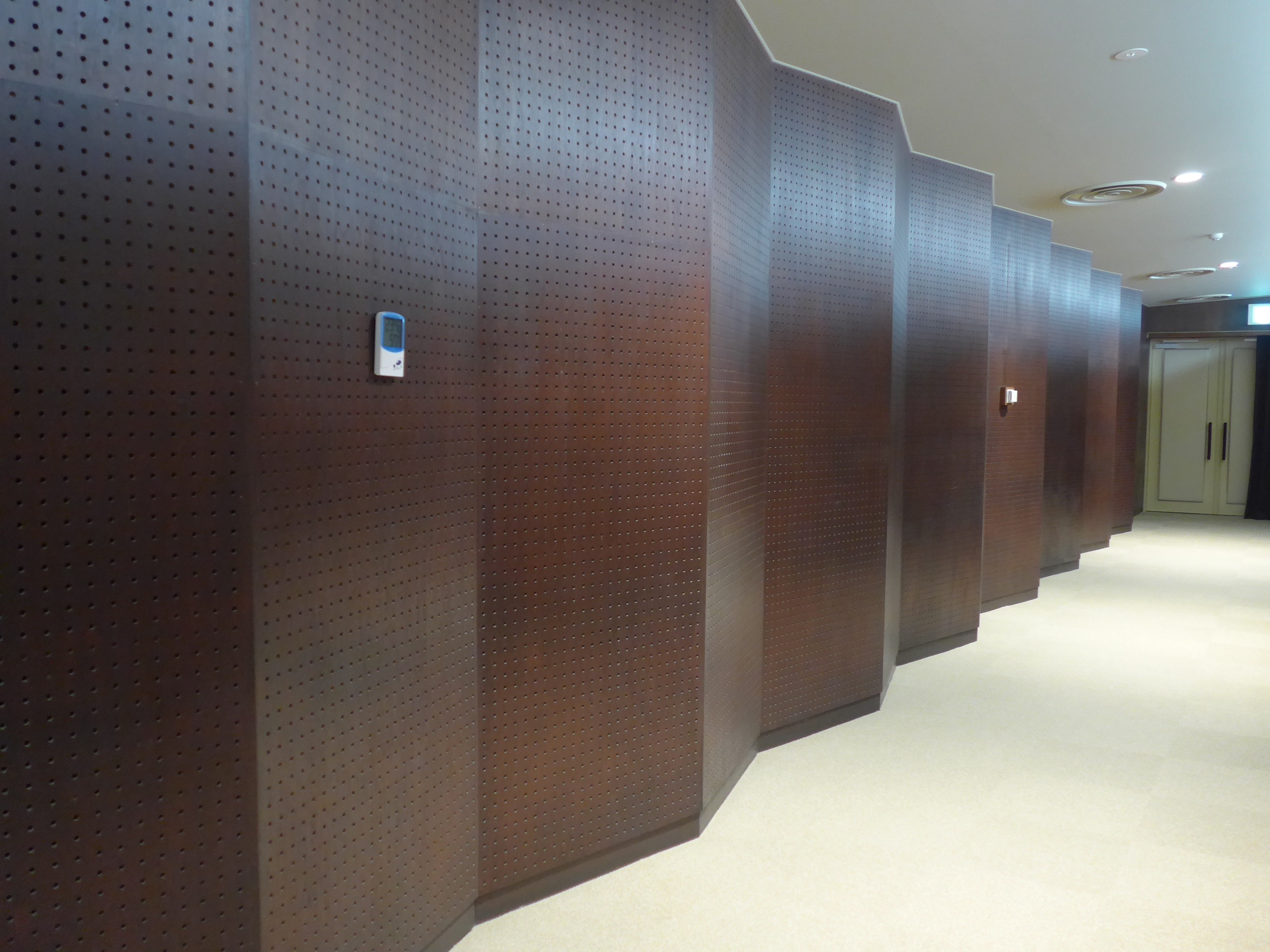 Also pay attention to the wall behind the seats on the second floor!
The perforated board is bent like a folding screen. This is also a device to prevent the sound from reverberating more than necessary. This wall is also cleaned and re-painted to give a distinctly high quality image. 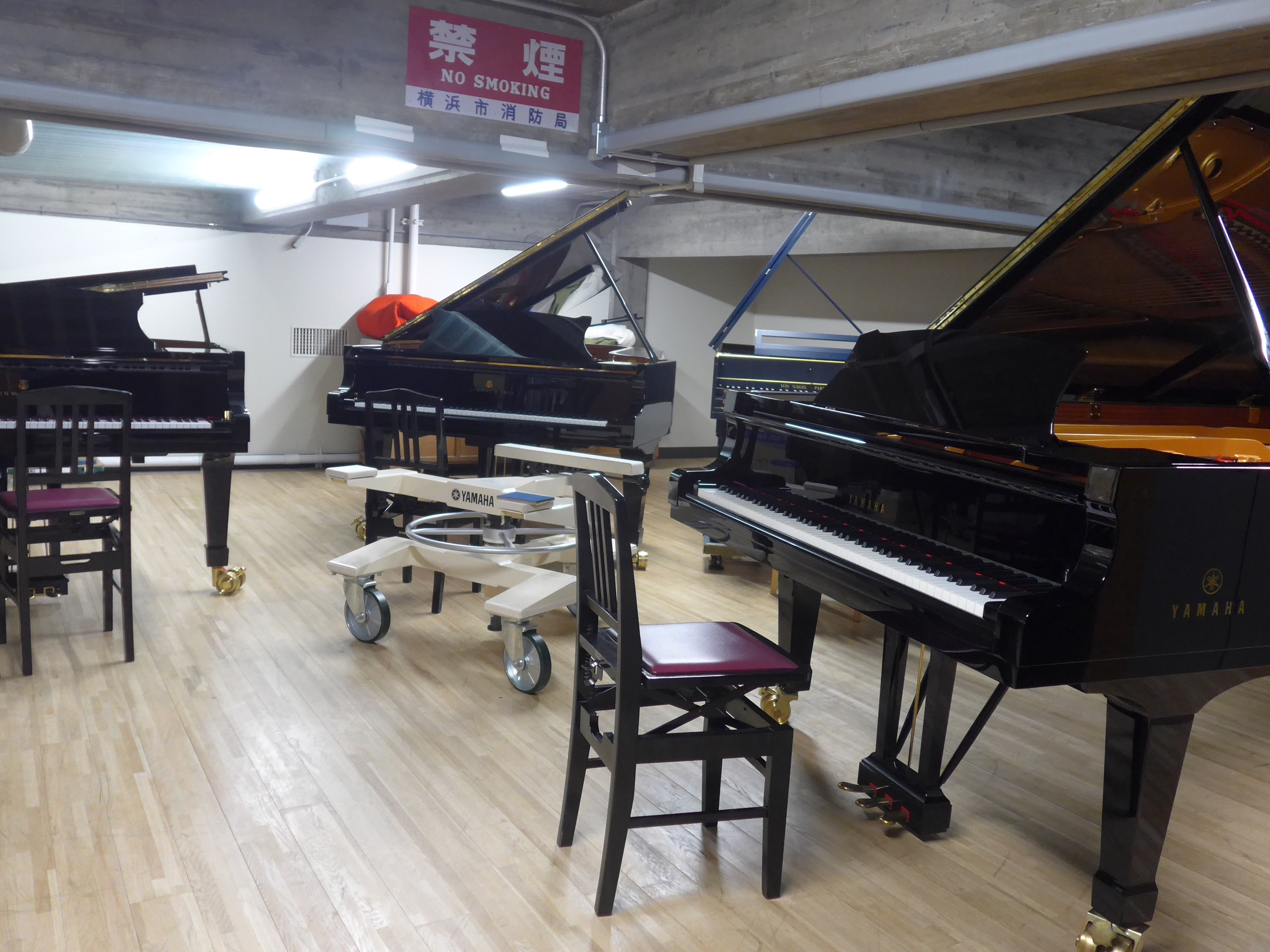 Also tour the instrument store behind the stage sleeves. To protect delicate instruments, indoorsTemperature and humidity are constantly controlled. In other words, this is "the most comfortable place in the music hall."

This is a waiting room behind the scenes. Why is a concrete pillar standing in the middle ...? If you think, this is a space that was added later. In other words, they took in the pillars that stood outdoors. Somehow, full of handmade feeling. 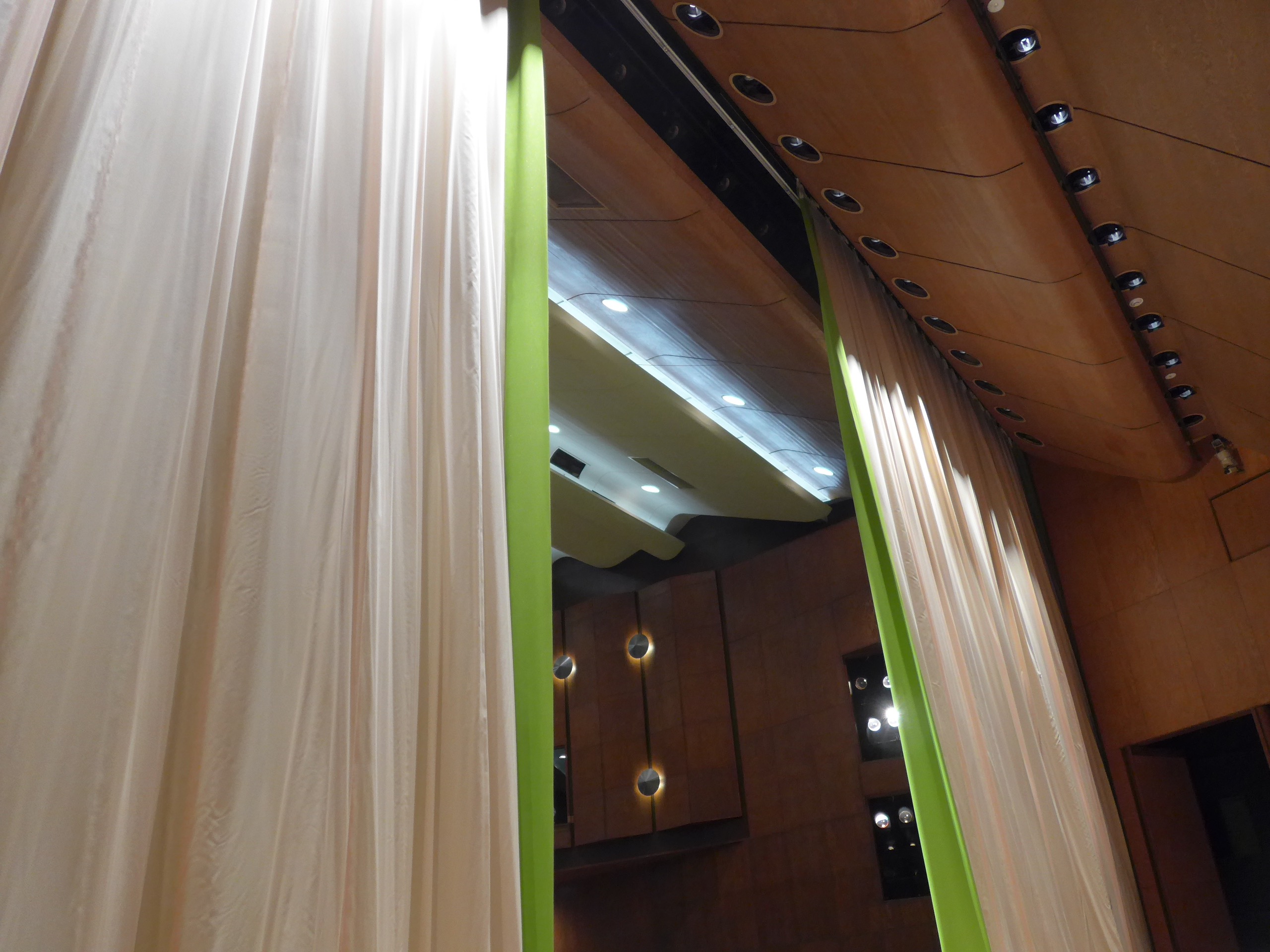 I have visited the music hall many times, but it may be my first time to see a curtain. Don't say "Is it necessary?" There is a deep reason for this.
The concert hall was planned shortly after the war. Some members of the parliament had said, "What are the music halls, even though they have trouble eating?" It was said that as a result of proceeding as a “public hall that everyone can use” to persuade such voices, theater equipment such as curtains and projection screens would be added.
However, the stage curtain is also designed by Maekawa. This time, it seems that it was a new tone based on the materials at the time, so if you have the opportunity, please watch it nearby. 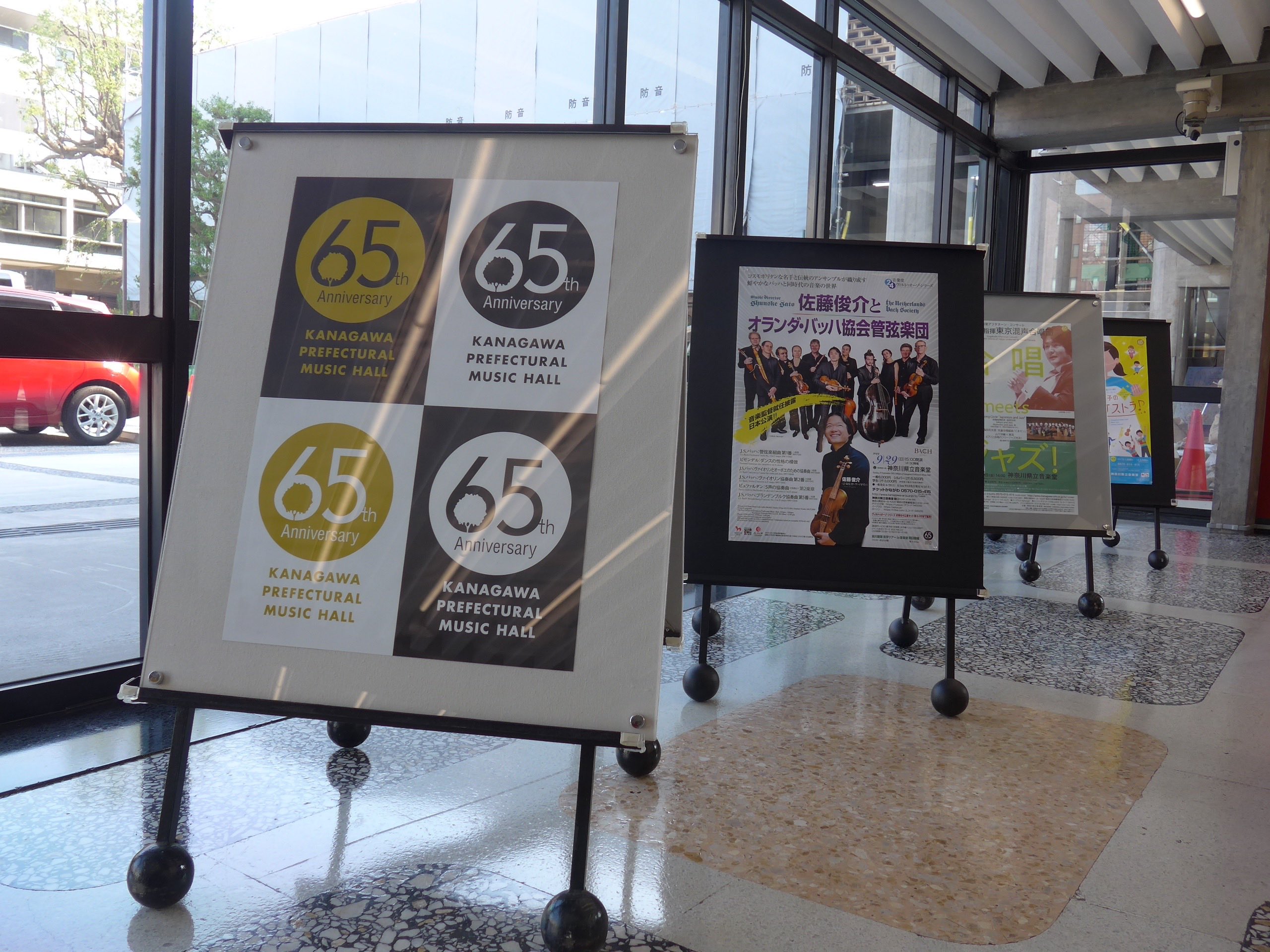 I overlooked it, but the music stand and the chair on which the musicians sat were also designed by Maekawa. A simple chair with no waste seems to suit a stylish cafe. 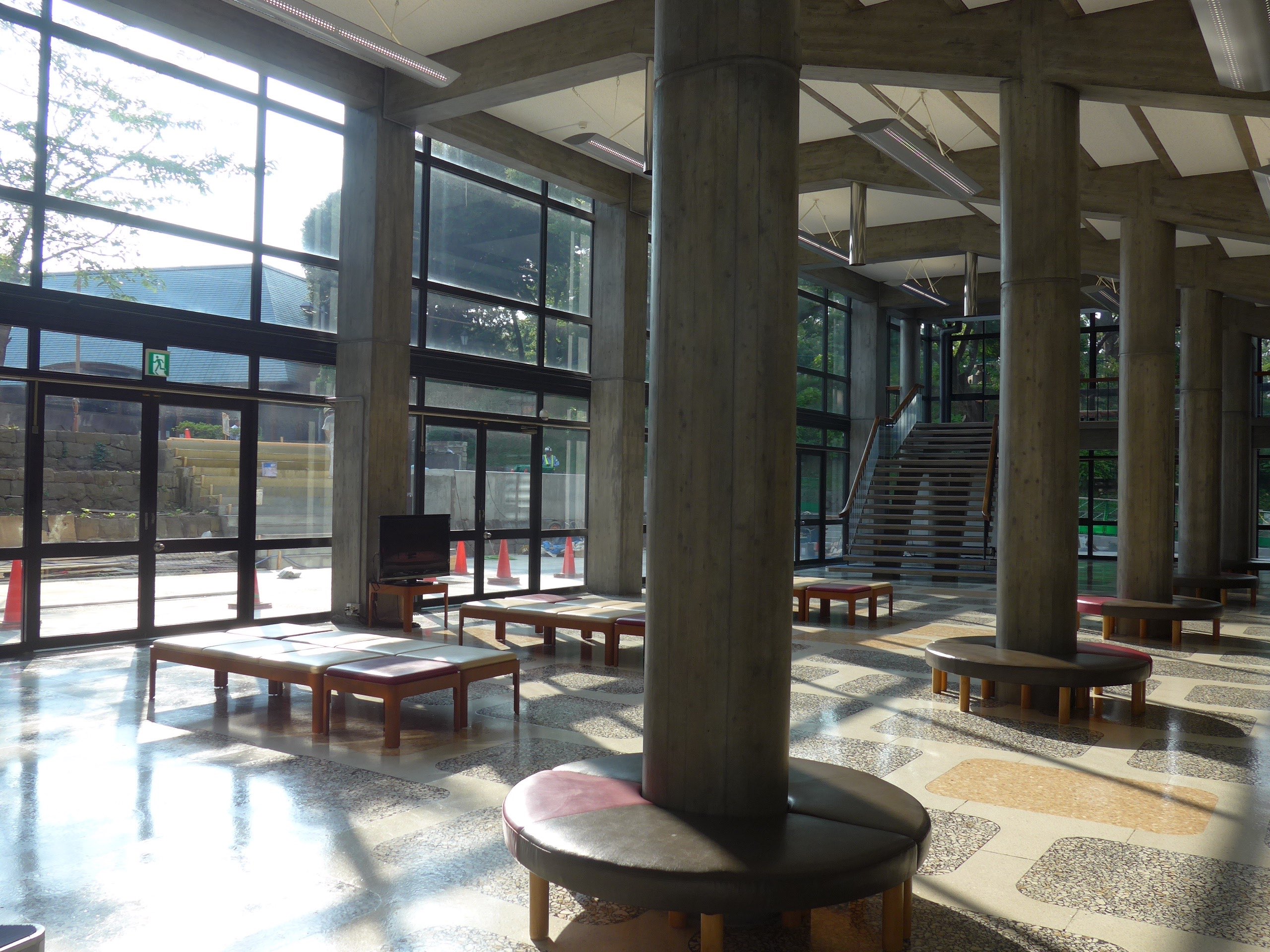 Finally, look back at the foyer after the customer left.
I always love the foyer, which is wrapped in the exhilaration of the concert and the unusual throb.
But on days without concerts, the music hall without sound was happy ... 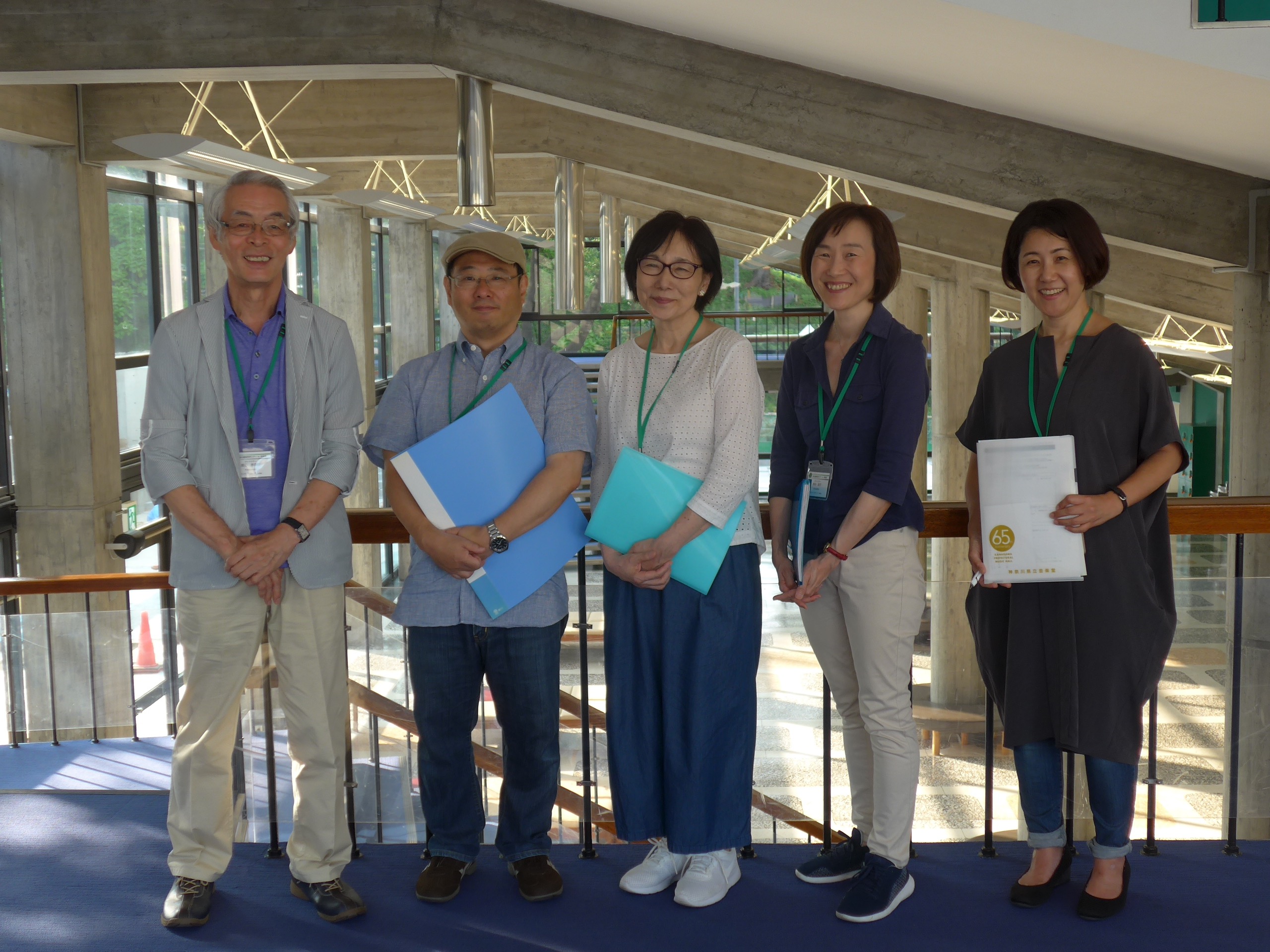 The members of the volunteer group bridge who gave us a guide. With three keywords of “enjoy,” “learn,” and “connect,” they seem to be conducting architectural tours as an activity to get close to local culture and art.
Thank you very much!

"Maekawa Architecture Tour in Music Hall" will be held in the future.
This time I participated in the full course (about 60 minutes, participation fee 500 yen).
A short course of about 20 minutes does not require advance application and you can participate for free, so please feel free to go out!

Kanagawa Prefectural Ongakudo opened in 1954 as the first full-scale music hall in Japan as a public facility. The hall, which was designed to give the best acoustic effects, modeled after the Royal Festival Hall in London, was acclaimed at the time of its opening as "The Best Sound of the East", and its sound has been highly evaluated both in Japan and overseas. You. The walls of the hall are all made of wood, and its acoustic sound continues to impress people 60 years after its opening. In 1998, the Ministry of Construction was selected as one of the “100 Best Public Buildings” by the Ministry of Construction as an excellent public facility rooted in the area. In addition, in 1999, DOCOMOMO (Docomomo) was designated as an important cultural heritage of the 20th century. (International organization established to record and preserve the building and environment involved in the movement).