Approaching the truth of the "mysterious opera"? How to enjoy Handel's "Silla" 120%

Handel's opera "Scilla" was written based on the latter half of Lucius Cornelius Sulla, a real dictator in ancient Rome. Even though the script and sheet music remain, it is uncertain whether it was performed at the theater at that time, and it is a work that is rarely performed even in modern Europe. From an amateur's point of view, I wonder, "Is that because it's bad?" (Excuse me!).
An opera with such a mystery will be performed at the Kanagawa Prefectural Music Hall. Prior to this, a lecture concert entitled "Handel's Mystery and Opera" Scilla "-The Story of Ancient Rome" was held. This is a chance to get closer to the world of opera, which I felt was a high threshold! With many years of admiration in my heart, I went out. 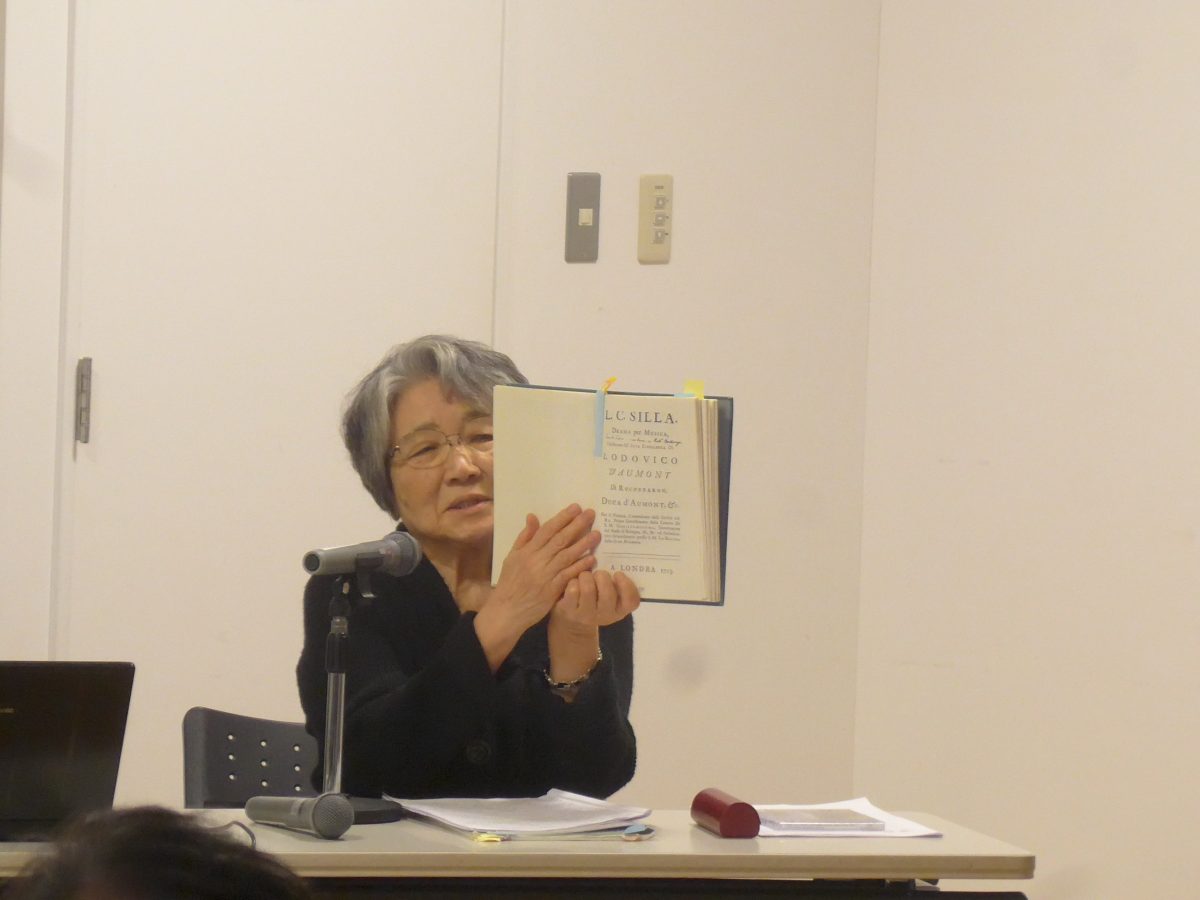 The lecture starts with "Scilla as seen from the script" by Ms. Suwa, who works on the script translation at the Japan Handel Association. First, listen to the synopsis and introduction of the characters.
Even so, the main character, Scilla, is a terrible guy. I will do my best to power harassment and sexual harassment, such as giving a little bit to my friend's wife and lover, and when it gets cold, both the couple will shift to the left. However, as the theme, it seems that it is also the subject of Mozart's opera "Lucho Silla", so it is a typical "tyrant thing".
Mr. Suwa says, "The development is abrupt and ignores the theory too much," but he seems to be attracted to the composition and unique scenes.
"Although there is a lack of emotion, the idea that goes beyond the frame of a sentimental opera is interesting. The characters are also rough but lively, so I think that it is not the" worst script "at all. increase"
I see. As a story, I thought it would be more interesting to have a "bad guy". 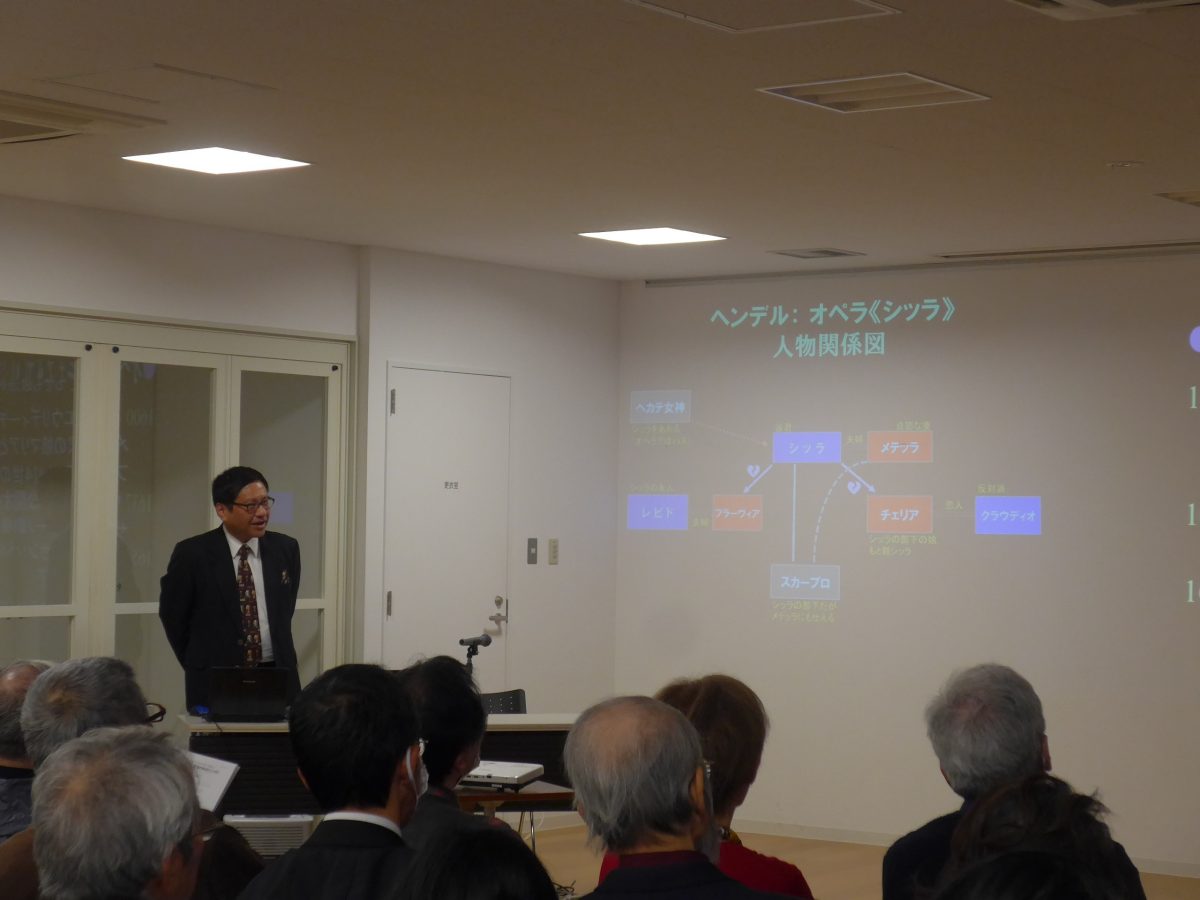 Next is "Scilla in History and Politics" by Mr. Tadashi Mikajiri, a member of the Japan Handel Association and a Handel researcher.
First of all, I was surprised at the story that "opera was a means to appeal political claims and the legitimacy of the kingship in this era." However, if you compare the time when "Scilla" was written with the actual chronology, and then apply real people to the characters, it certainly fits perfectly.
The issue of succession to the British throne in the first half of the 18th century, and the War of the Spanish Succession. As we unravel the history, the world of opera wears realistic colors. If the politician blames you for a critical scenario, you can escape by saying, "No, it's just history," which is similar to Japanese ukiyo-e and Kabuki.

Despite the detailed writing, there is no record of the performance, and Mikajiri concludes that "there was no public performance." why?
That's because John Churchill (= Scilla), Duke of Marlborough, has been ousted in the real world, and there is no need to blame him for being a tyrant. In a sense, it may be that the work has become obsolete.
It's a bit of a waste, but don't worry, much of the music was diverted to the later opera "Amadige." At that time, such "reuse" was not uncommon. 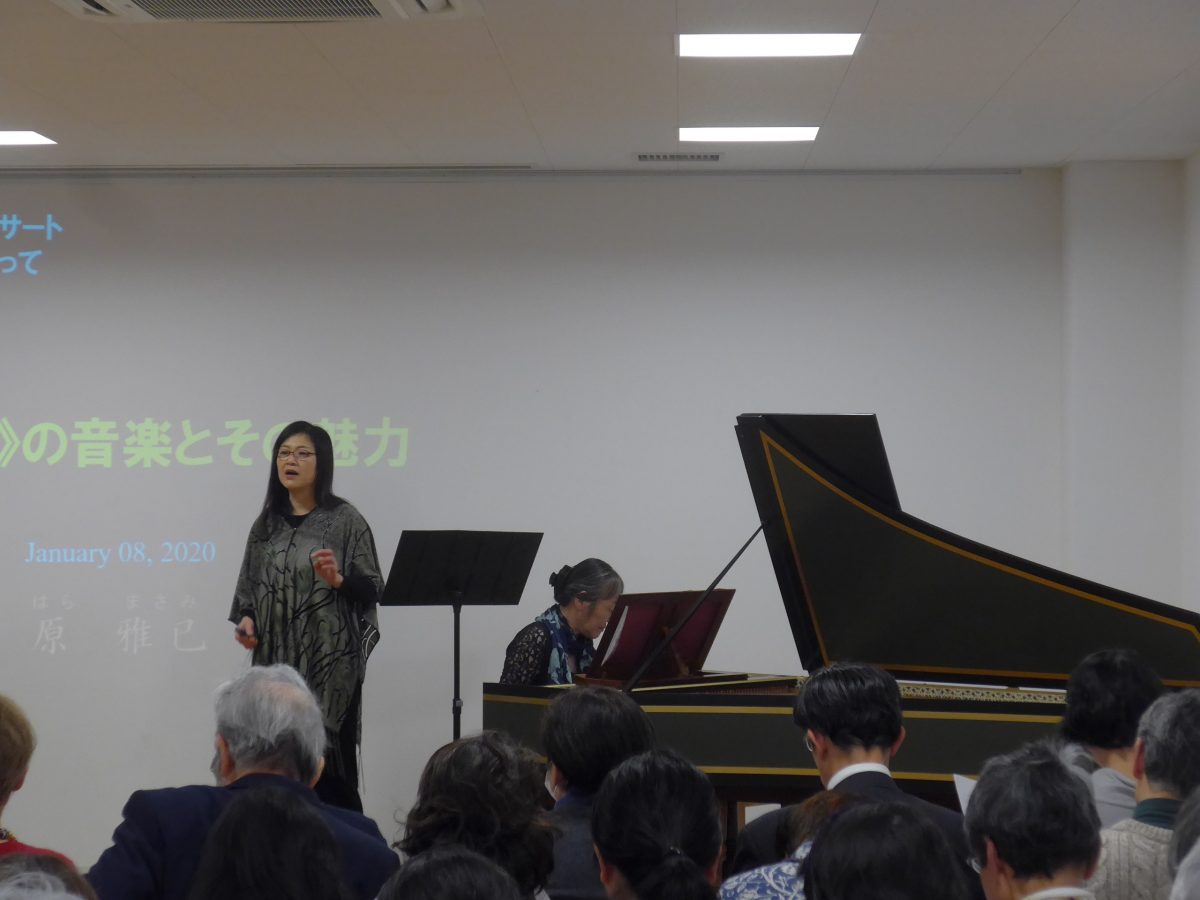 And finally, "Music of << Silla >> and its charm" by Masami Hara, who is the music director of the Japan Handel Association. While demonstrating Akiko Ito of the harpsichord, she will receive a lecture on the structure of the opera, the composition process, and the effects of sound.
Unfortunately, I didn't know much about the specialty of music. However, what was interesting was that the expression of the music changed greatly depending on the tempo of the performance.
Many of the songs in Scilla's sheet music do not show the tempo, and Mr. Hara speculates from this that "it may not have been played after all." So how do you decide the tempo to actually play? It seems that there are various methods, such as thinking from the script or referring to songs diverted to other operas, but as long as it is a guess, there is more than one answer.
Mr. Hara proposed two tempos with different interpretations as "experiments". Mariko Higuchi (soprano) and Ayumi Yokomachi (mezzo-soprano) listened to the song. 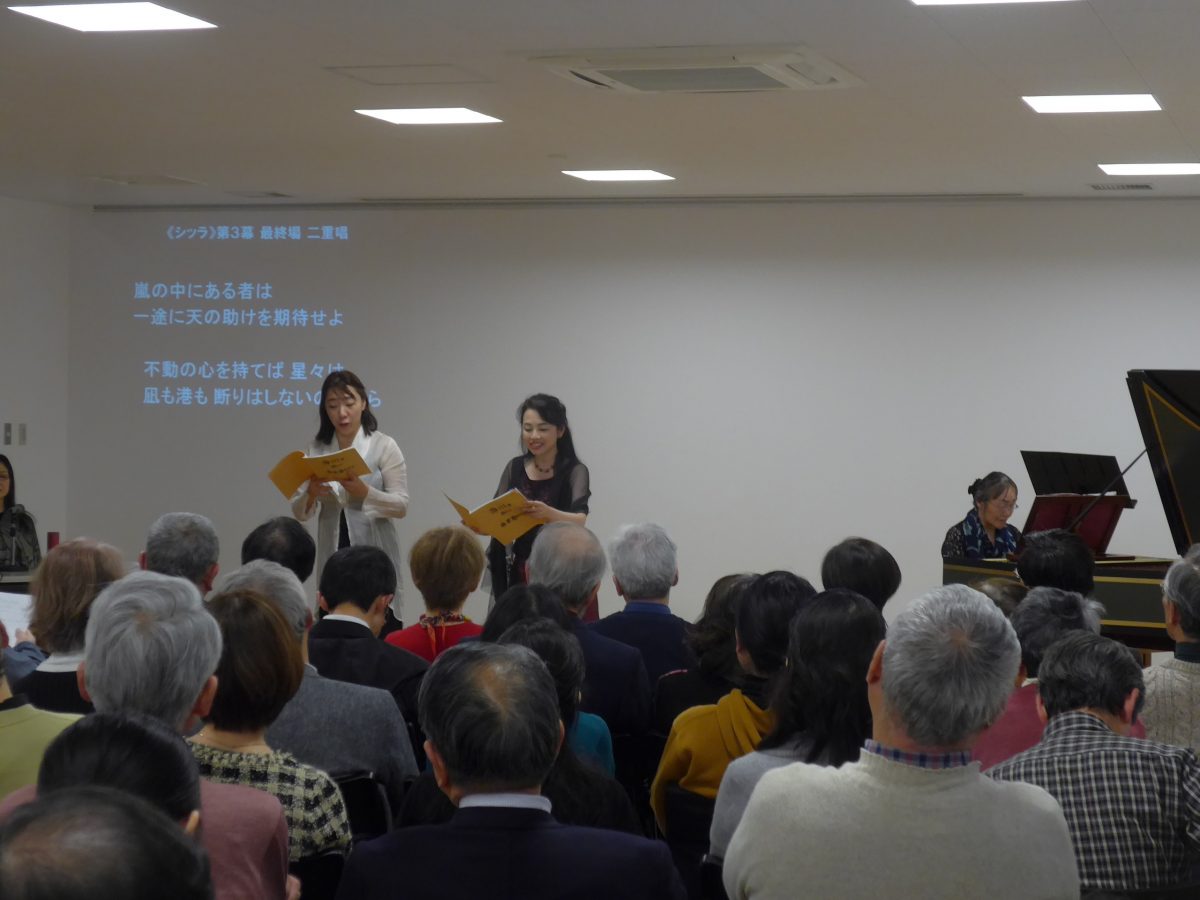 I was surprised to hear it! Even though the music is the same, does the nuance change so much just because the tempo is different? Music is deep ...
Will Fabio Biondi, the music director and conductor, decide the tempo for each song in this performance of "Scilla"? It's a very interesting task, and I'm a little happy that it will be premiered in Japan. 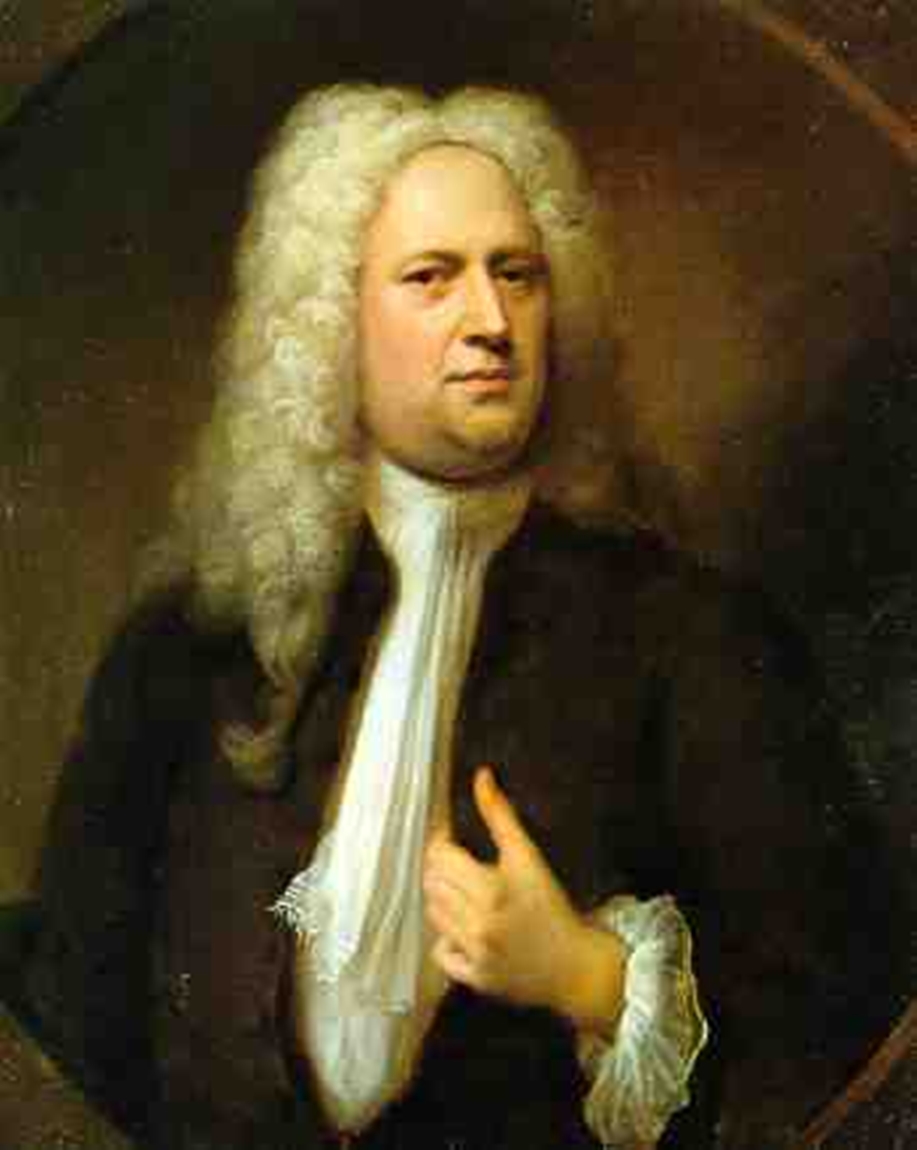 It seems that many of Handel's operas had complicated stories and were difficult to understand. In that respect, Scilla is extremely simple and compact. Still, it's packed with beautiful and fascinating music, so even beginners can enjoy it.
"Scilla" was not played at that time due to various "adult circumstances". I definitely want to experience it in Yokohama in 2020, 300 years later.