"Anti Human Education II" by Hajime Juku and Tokyo Deathlock, planned as one of the works participating in Magfest '20. In response to a call from director Junnosuke Tada (head of Tokyo Deathlock) to "create theater!" rice field.
The performance itself was canceled due to consideration of the new coronavirus infection, and on February 28 (Friday), the recital was held at the Kanagawa Prefectural Youth Center Studio HIKARI without an audience (only those involved participated). However, as an outreach activity (business trip service by artists), we believe that the efforts leading up to the actual performance are meaningful, and this time we will report on the journey to the presentation. 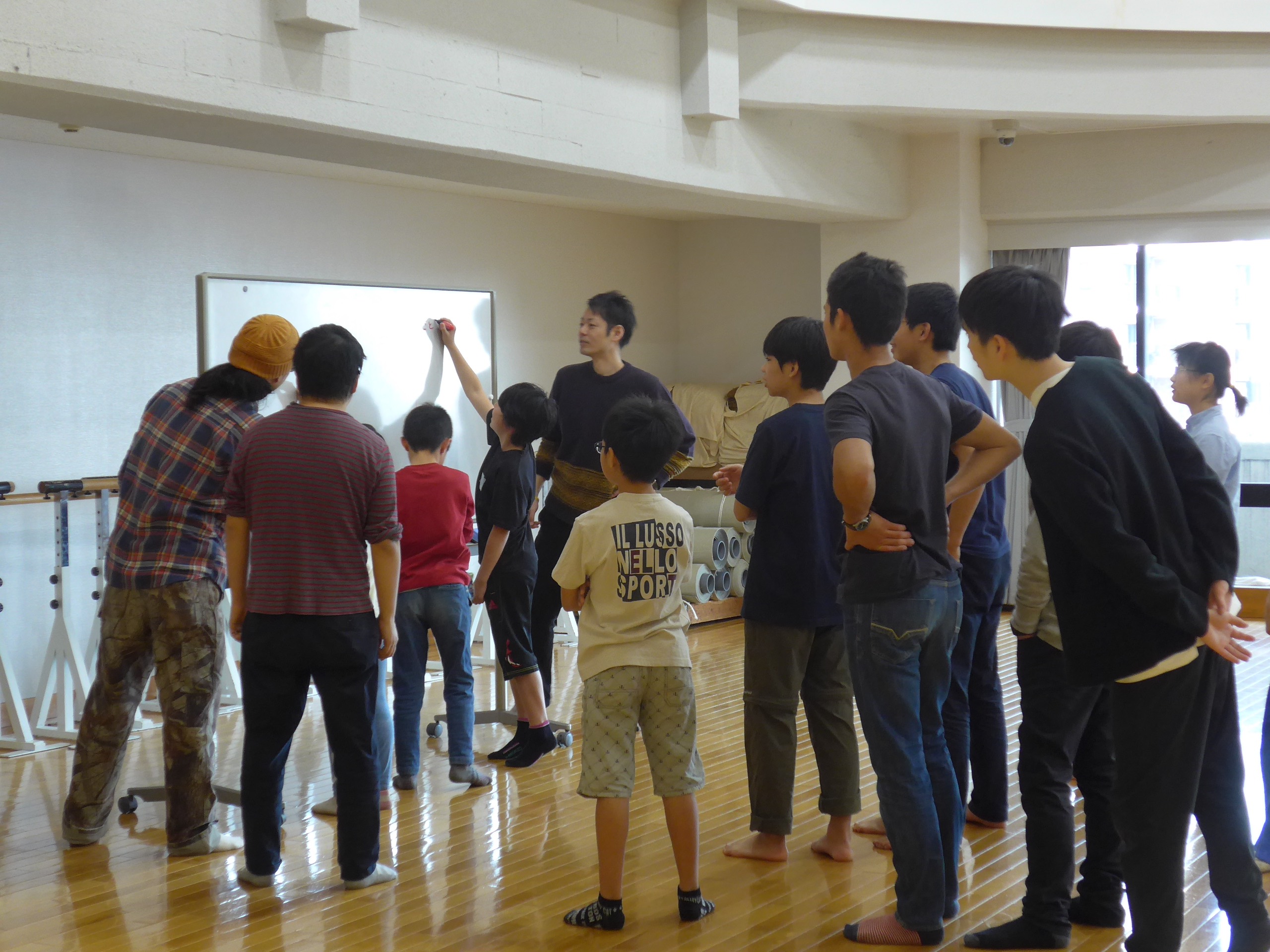 I have known Tada-san and the other children at the cram school for about three years. Until now, the workshop was only held once a year, but this time, with the aim of creating one theatrical work, it seems that participants were recruited again.
The practice started on December 26th last year. After that, we met once a week, mainly on weekends, and held workshops such as word games.

“It is interesting to create a play through repeated trial and error, and sometimes it is interesting not to complete it. We are proceeding with the feeling of "let's see" (Mr. Tada)

At the workshop in early February, the discussion that would become the framework of "theater" had begun. Apparently, the theme seems to be related to school lessons. First of all, we will list the “morning scenery”, “things we didn’t like to experience”, “things we wanted to try”, etc. I'm curious about what kind of "theater" you can do...

“If necessary, I may make some texts, but there is no flow of me creating new words and memorizing them. I don't know what will happen (laughs)" (Mr. Tada)

And on February 28th (Friday), the results presentation was held. On the walls of HIKARI, the contents of the discussions held by four teams were posted.
A team that understands children's feelings, a group silent team, a backdoor team, and a crowded train team. I have no idea what the story will be about, but anyway, the bell rang to announce the beginning of the “class” and I took my seat.

The morning session before class begins with chanting sutras, following the cram school custom. Printouts were also distributed to the audience, so everyone energetically chanted the Heart Sutra.

The first hour is "to understand the child's feelings".
I smile wryly at the development in which the teacher standing on the podium (stage) forces the students in the classroom (audience) with "adult arguments", but somehow my heart aches. When I looked back, I realized that children were looking at the unreasonable words and deeds of adults with severe eyes.

When I thought that the child sitting next to me suddenly started talking to me, I was surprised to find that Hajime cram school children who were “actors” were sitting together. Rather than "audience participation", it's a theater that harmoniously integrates the stage and the audience without boundaries.

The second hour is "group silence".
In order to stop unforgivable adult behavior such as vomiting, littering, and using smartphones while walking, everyone silently surrounds the person who committed the act. That is the "collective silent game". So, we cleaned up the stage and the audience and tried to experience it together. "I can't do anything if I'm being watched by others!"

After a break, the third hour is "Kageguchi". In line with the theme, the audience seats also changed to surround the stage.
It's fun to say, but sad to say. Children are made to think about what they were thinking while discussing this theme.

The 4th hour is "Crowded Train".
During commuting hours, some train lines in the metropolitan area have more than 150% occupancy. People say, ``Become an adult who understands people's feelings.

"Anti Human Education II" by Hajime Juku and Tokyo Deathlock will be performed at a different time. Any further introduction would be a spoiler, so if you find a theme that interests you, please come and see the performance!

After the results presentation, we asked the students about their impressions.

“Unlike when we present at workshops or Hajimejuku, we are selling tickets for the performance this time, so the degree of seriousness is different. It seems that it will be held in a different form, but it means that I have more time to practice, so I think that's good." (Vivi)

“At first, we were just playing tag and things like Daruma falling over (laughs). I had no idea what was going to happen, but it was fun!” (Moeno & Fuu-chan & Kazu & Akari)

How was this workshop?

TadaThe fact that they are repeating trial and error is like watching a play. We only have one rehearsal a week, but it's interesting to see them come up with various ideas during that time. I think it's amazing how they respond to feedback from other teams on their presentations and make changes until the next time.
Even if there is a problem during the performance, it is also important to overcome it, so I think it is important what kind of experience you have in the performance.
It's an audience participation type, so I want the audience to do their best too.

What are outreach activities?

I feel that the Tada school tends to teach only “correct” things and tends to be closed. In that respect, art is to allow even if there are some mistakes, saying "It's okay as it is". In other words, whether it's dance or music, I think it's meaningful for artists to go and create a little different time than usual.
In theater outreach, I would like to tell people to "try their own expression" rather than teaching theater. Even things that would normally get me mad, but in theater I don't get mad at them, so I try to express what I feel. For example, when a girl who usually doesn't listen to people performs a play that doesn't listen to people, it's really good (laughs). On the other hand, by trying to perform something that is usually difficult for you, you can understand the feelings of those who do it.

How did you feel after watching the results presentation?

TadaToday , the audience reacted well to the children's throws, so I think I was able to perform better than in practice. Even though it was a result presentation, it was an experience close to the real thing, so I think that the next time, I think that the range of images that I can imagine has expanded.