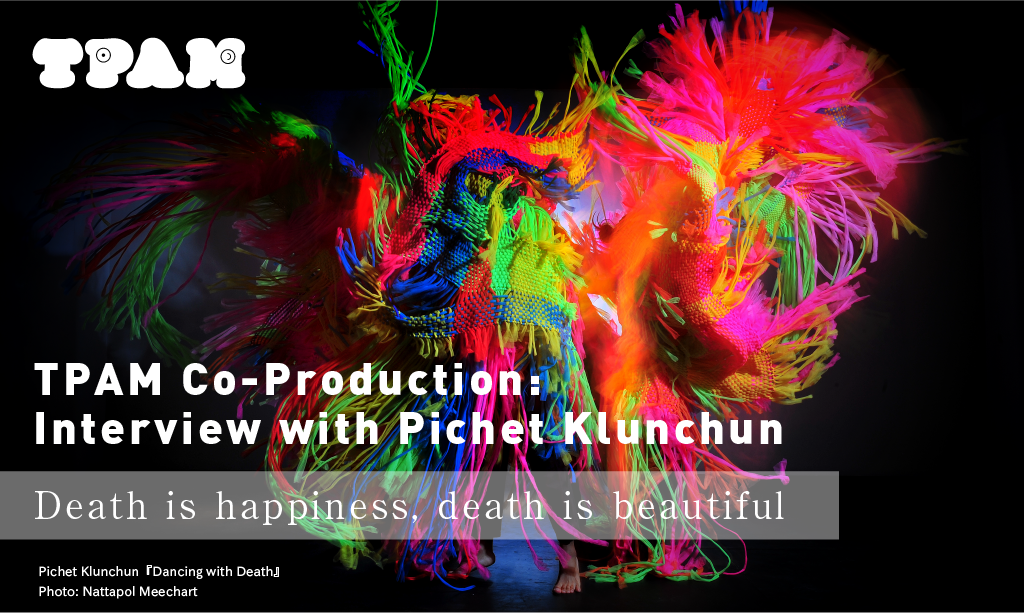 P: The first time I saw “Phi ta Khon Festival”, I was interested in the way in which the locals created the festival by themselves. Local cultures, Buddhism and superstitions were fused together to create their own art. In Thai, spirit is called “phi”, and I could see the image of it appearing. The locals regard ghosts and spirits as a presence without beginning and ending, and also as a reflection of people’s feeling. Materials for costumes and masks used in the festival are taken from their immediate everyday environment. For example, masks are made of coconuts leafs, coconut shells and sticky rice steamer. Costumes uses thrown-away cloth and the monk’s yellow garment. The design of the costumes and masks is determined by superstitions and their knowledge. In terms of creating the festival, two different kinds of time, “death” and “reality”, are expressed three-dimensionally, where they coexist. In other words, the structure situates a spirit and person on the same plane. When creating a theatre piece, art professionals often create a structure by taking considerations of the “viewer” and the “self”, “here” and “now”, and I found it fascinating that the locals without any formal art training make similar structures and craft the arts of their own. Although I gained various knowledge from this festival, I was particularly motivated by their expression that conveyed death is happiness, death is beautiful. This is what sparked my initial idea.

F: I would like to know more about what you just mentioned, “death is happiness, death is beautiful”. I think all of your previous works touch “death” directly or indirectly. Inthe new work, I have an impression that your view of life and death is expressed more clearly. What do you think?

P: Well, most of my works express issues related to “death”. Intrinsically, people desire to be predominant and victorious in every aspect. For example, going against nature, people believe that they can make rain, and that they can control the volume of water by storing water in dams. Today we can even go out of the earth into the space. However, there is something that people can never win. It is “death”. There is no way to control death. I think perfect nature is almost gone today except death. I regard it as the only manifestation of perfect nature, and also as “reincarnation”. This is why I think death is beautiful. Death can never be created by a performance on stage. For example, on the stage, we can eat and lie down, but we can never create death. I think it’s good that we try to express death in different ways through stage performance. The locals of “Phi ta Khon Festival” understands that when a person dies, he breaks into three parts: “body, spirit and mind”. In the festival, “death” was expressed based on this idea. Usually, death is frightening to people. However, the festival tells us that death is something familiar, death is not frightening.

P: “Reincarnation” is a basic idea of Buddhism, but the work doesn’t explain about it in particular. For example, nature - spring comes, summer comes, fall comes and winter comes, and spring comes again – is a manifestation of “reincarnation”. I think everything reincarnates. I don’t intend to summarize it such as the cycle of birth, death and then again birth. There are various ideas around it. However, the concept of “reincarnation” has crucially influenced this work. It appears in the choreography and design of the stage. Also, it appears in the structure of the work, in which the story goes back to the “beginning.” However, even if it returns to the same place, it is totally different from before. We celebrate a birthday on the same day every year, however the time is different and we are also not the same people.

F: Are there any specific aspects to which you adopted the methods employed in “Phi ta Khon Festival”?

F: Aside from the visual elements such as the costume, do you use the method of combining things that wouldn’t co-exist otherwise in choreography?

P: Yes, I apply it to choreography too. I also incorporate the “personality” of the locals. It is about separating the “body” and “emotion”. When the viewers are watching this work, they will be using their “bodies”, “emotions” and “ideas”. Another characteristic of choreography is repetition. One movement is repeated once, twice and three times, but each time new things are generated. Dance of the locals gradually develops spontaneously, and they do so by maximizing the sense of self and the situation. These are the things that I applied to choreography.

F: So does it mean that movement is not completely choreographed, but kept possibilities open to be transformed by the judgment of individual dancers?

P: It is somewhere in-between.

The first trial, regarding the co-production in Asia

F: Now I would like to change the topic of our conversation. This time, your work was co-produced with Asian partners, such as Esplanade and TPAM. I also heard that the work is planned to tour Australia and other countries. I think that there are only few preceding examples of collaborations within Asia. You have various experiences of co-producing works in Europe. What do you think of co-productions in Asia?

P: This is the first work that I co-produced with Asian partners. I don’t think it’s so different from my previous co-productions. However, there is one point that makes me say, “this is so different”. When people from Asia sit around the table to develop plans together, I feel we engage in a dialogue based on the sense of similar cultures and ideas. This is very new sensation for me, and it is a positive one. Also, it is good that artists in Asia can receive production support. Foreseeing the dance in the future

P: If I were to answer to the question from an Asian perspective, I would say that everyone, be it a dancer or choreographer, will be making works based on their own ideas. However, I think there will be a decreasing number of them who makes an effort to be disciplined physically and mentally. Also the tradition, modern and all things will be mingled together. I also feel that artworks could no longer attain the status of a masterpiece. It would only exist momentarily, disappear instantly. This is how I foresee the future. Now if someone asks me “what should I do?” one thing I can tell at this moment is that there is a good chance that he will be successful in the future if he is willing to train and connect the body and spirit, because the younger generation doesn’t make an effort to discipline themselves physically and spiritually. If there is only limited space and time, they will create only what is possible in the small space given, and go out into a larger world by the use of computer. Quantity might increase, but quality will degrade. Uploading a post on facebook can get 0.1 to one million “likes” within one to thirty seconds. I think this kind of phenomena will happen in the future.

F: Will you continue to create works after ten years?

P: Yes. I will create and also dance. I will continue to dance until I die.

F: I wish to continue seeing as long as I am alive.

P: There is still a long way to go, maybe until it reaches to the generation of my grand children. I will train myself more.

F: Thank you. The time has come to close the interview.

P: I am very excited to present this work at TPAM. Currently we are in the final stage of polishing up, trying to deepen the work. See you soon.

F. Thank you very much. I am looking forward to seeing the work.